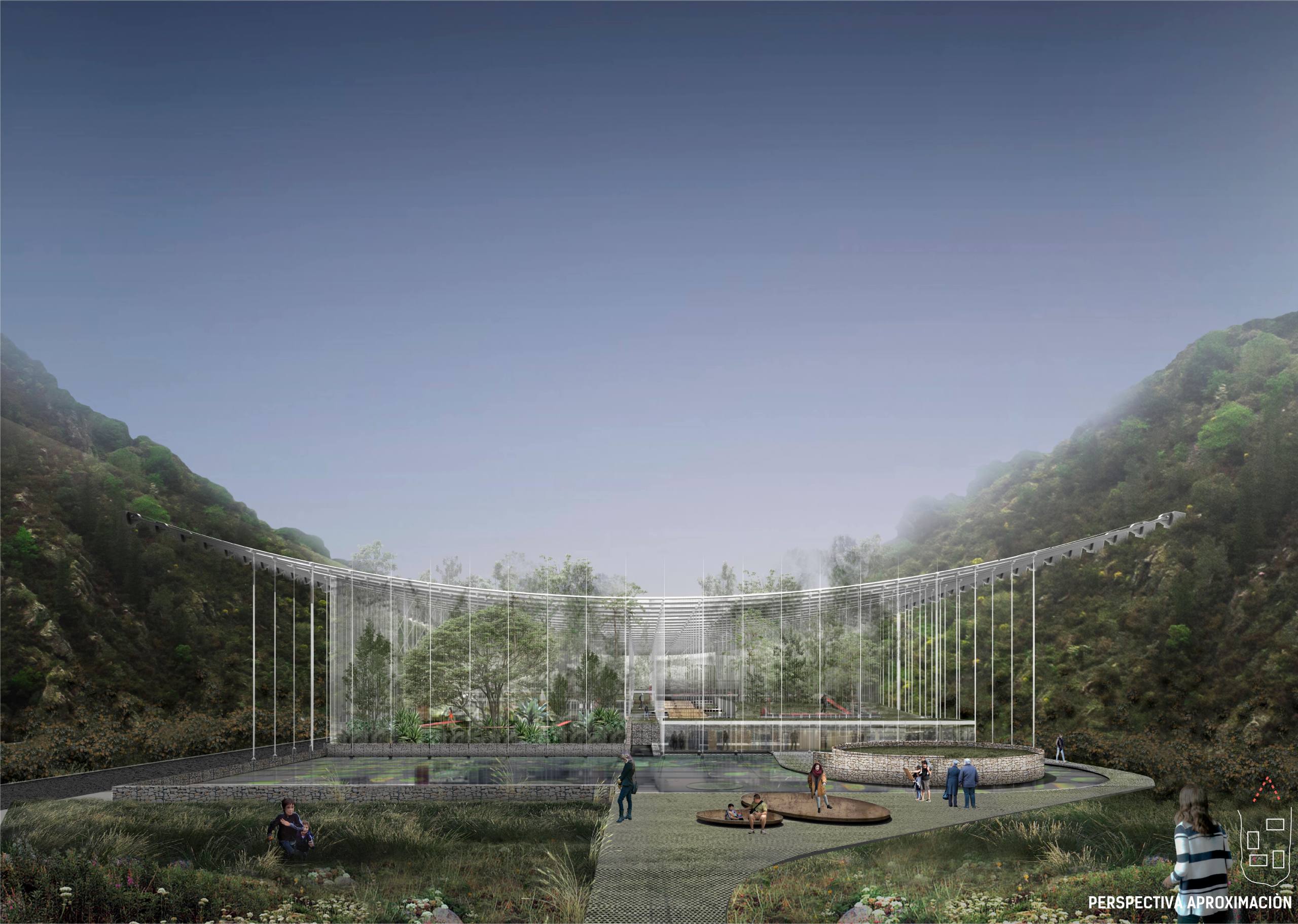 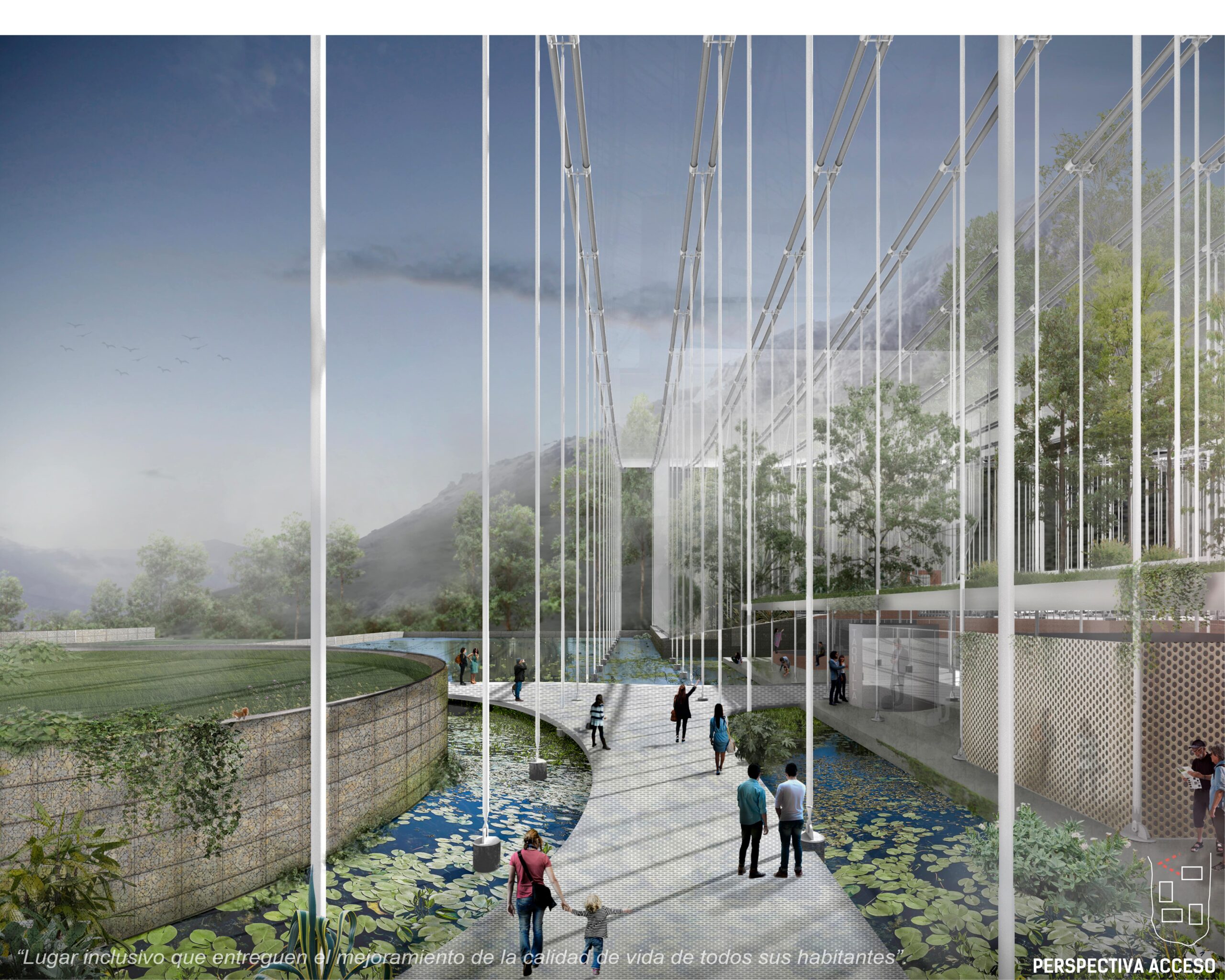 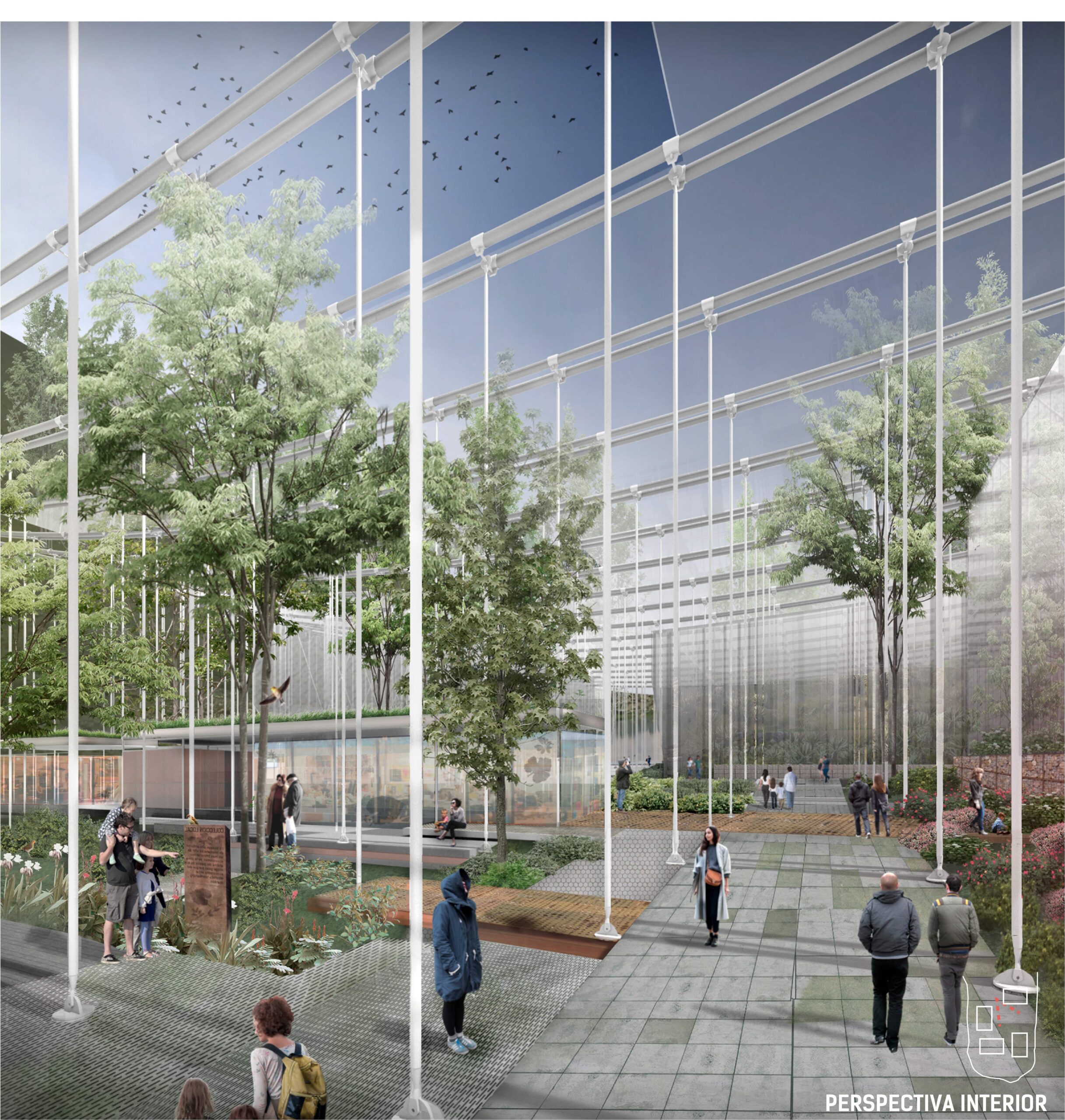 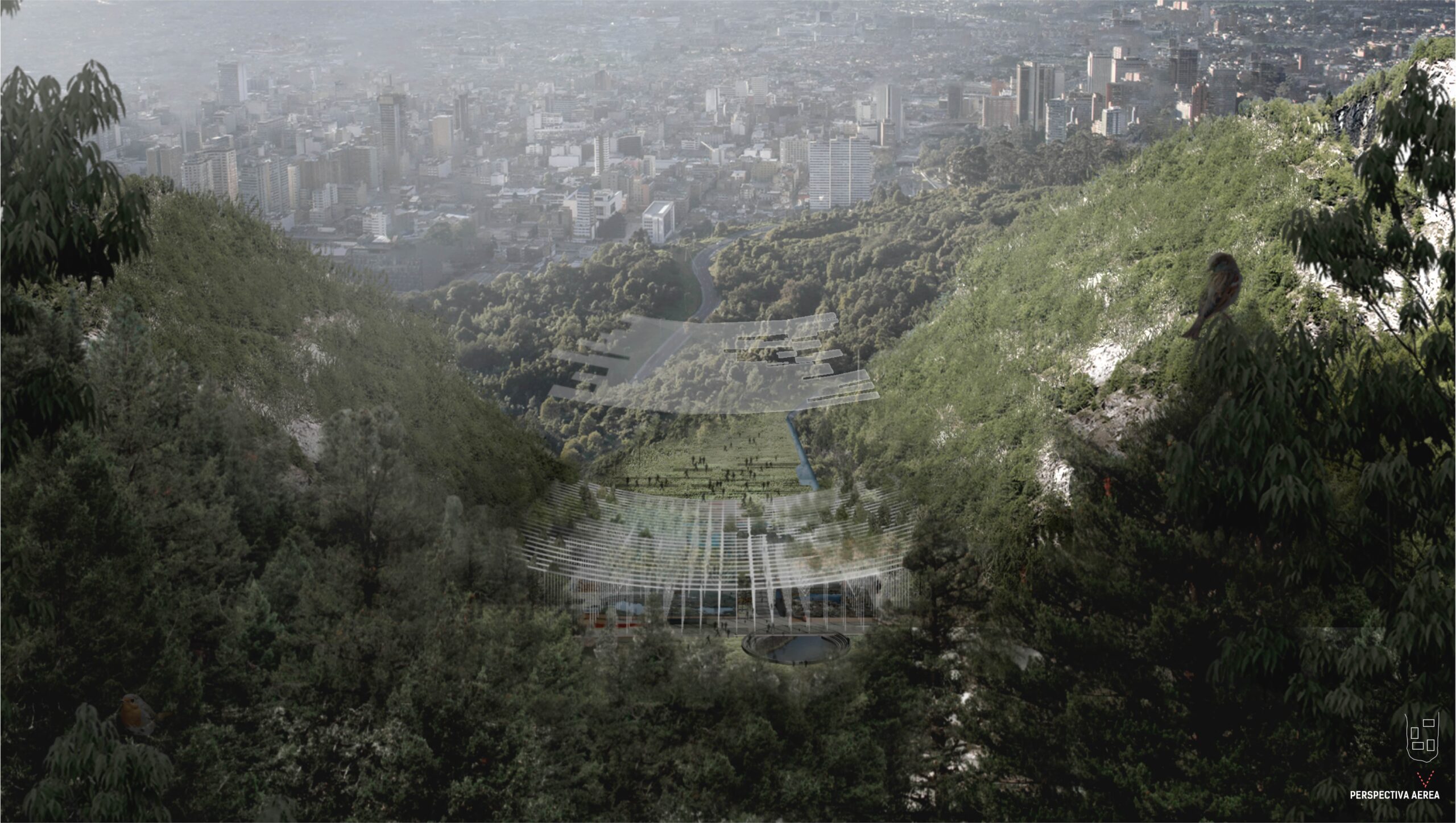 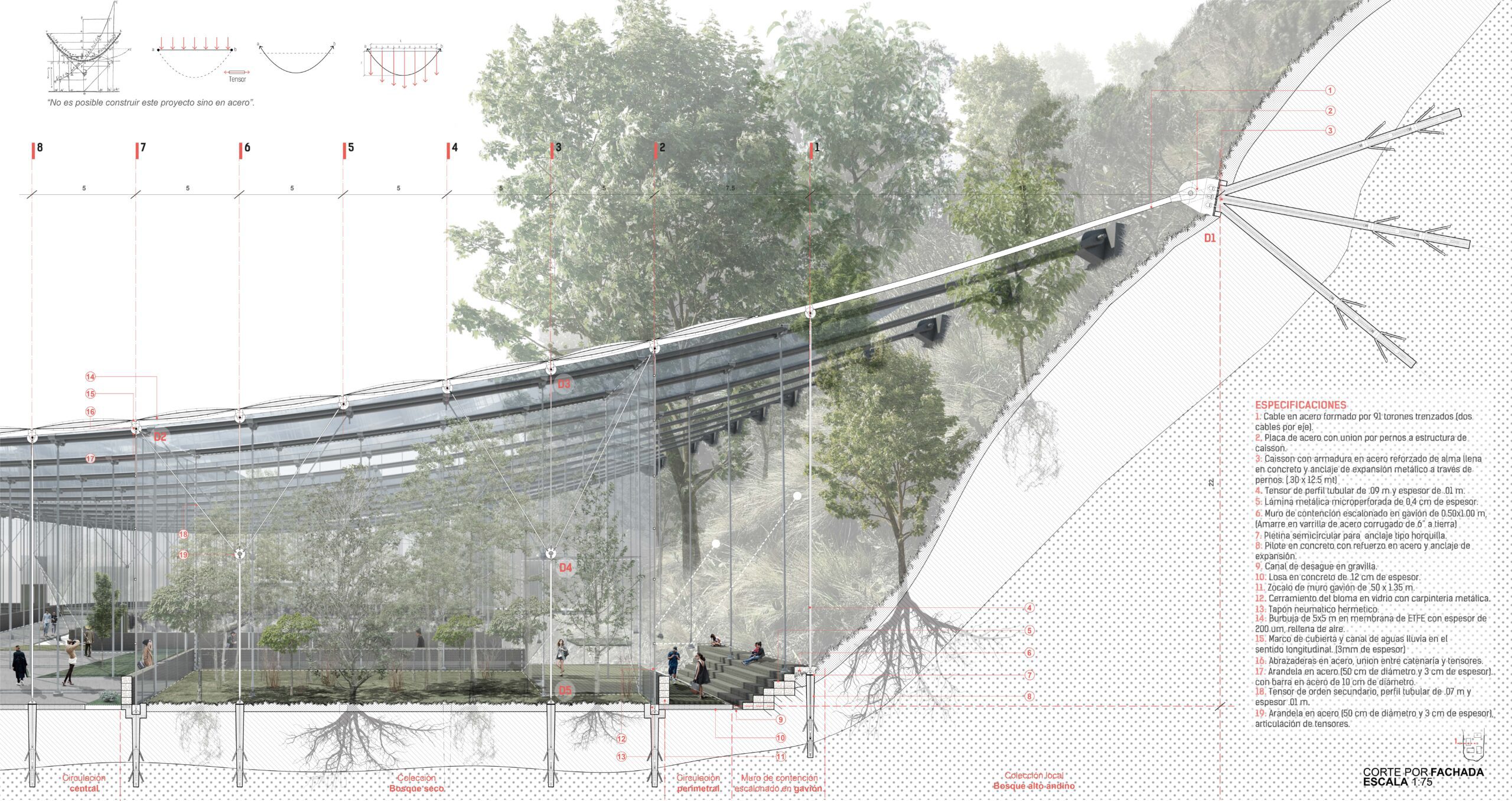 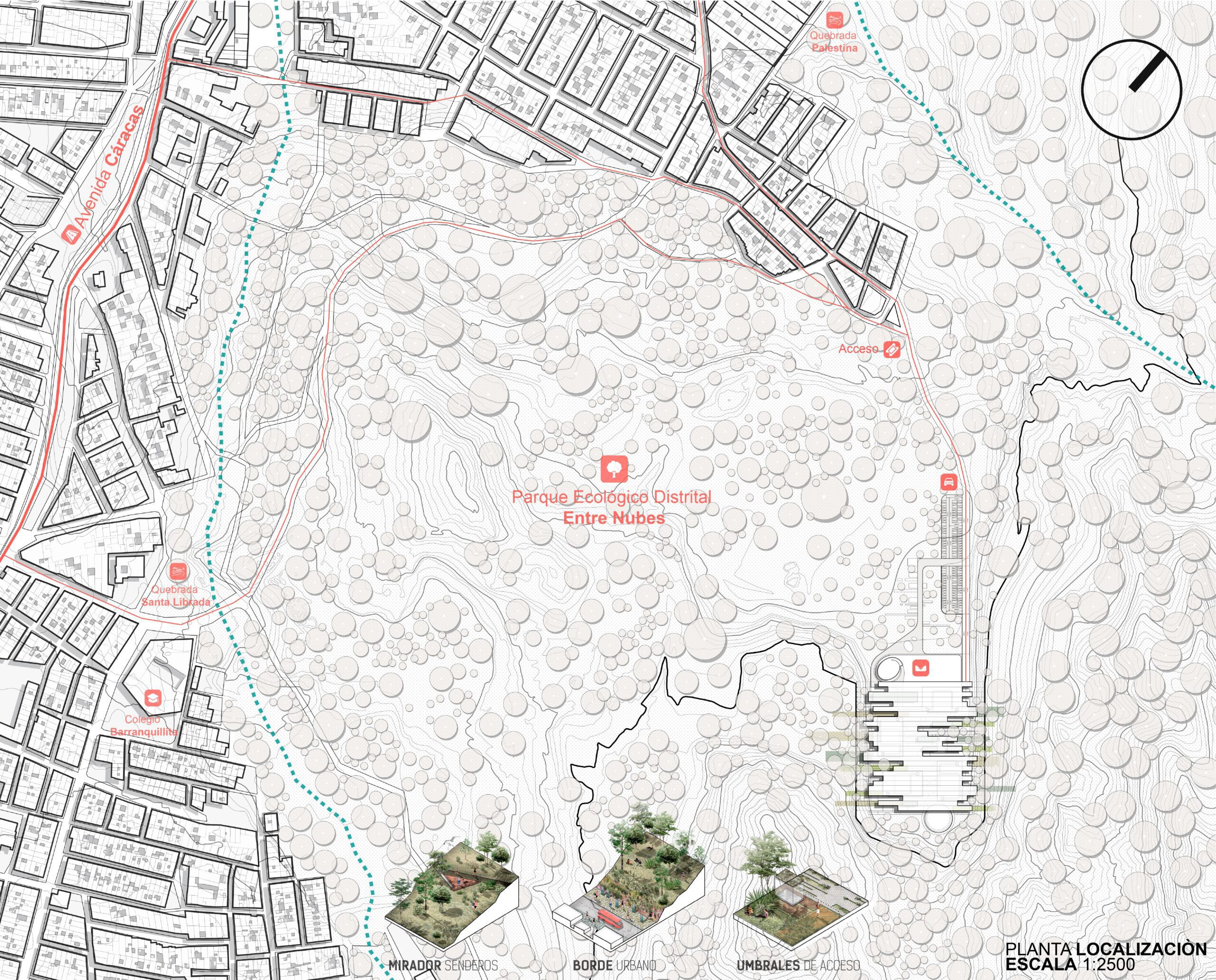 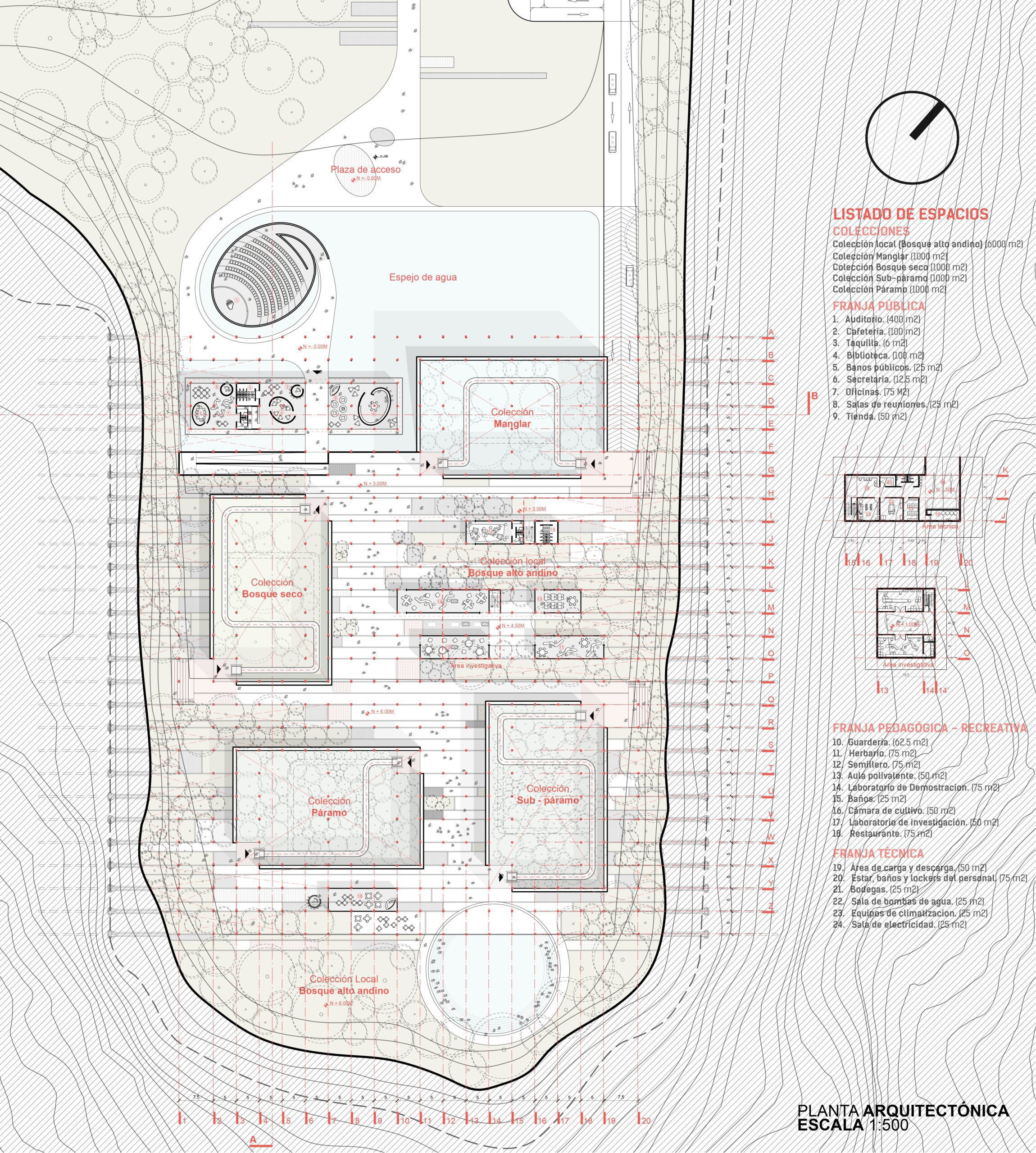 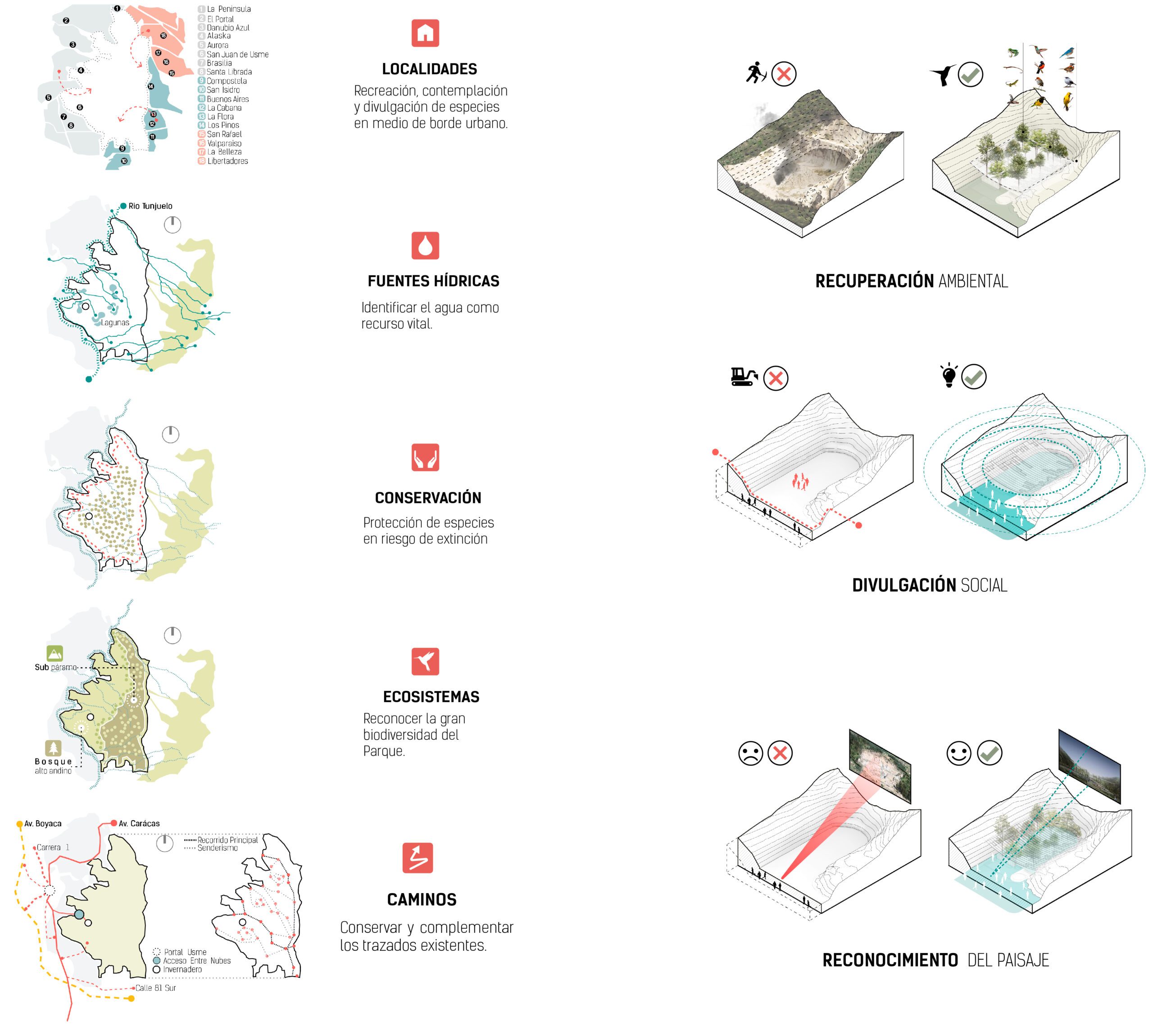 Rehabilitation of the mining footprint on the mountain.

The Entre Nubes district park is home to a wide variety of fauna and flora, a natural reserve where 7 streams flow into the Tunjuelo River, one of the three main rivers that crosses and cleans the city of Bogotá. The mining footprint has left large environmental scars or (quarries) that threaten to devour the city’s most important mountain ecosystem. The project, instead of a space for research, dissemination and protection of biodiversity, proposes to link human relations with its surroundings, recovering the silhouette of the mountain and the urban border between the city and the park that has destabilized the relationship between the urban landscape and natural landscape.

The excavation of the brickworks in the natural soil, has created a concavity in the mountain that makes it possible to fit the building in the mining footprint. The implantation of the building seeks to have the least possible environmental impact on the mountain and the terrain, a series of steel cables are supported by the slope of the mountain from end to end, they hang by forming a series of catenaries that cover a light of 130 meters. To give stability to the roof, a series of tensioners are proposed that anchor the catenaries to the floor by thin steel tensioners that carefully penetrate the ground and delimit the program in the different spaces destined for the community, dissolving the city-mountain limit being a public, cultural and educational equipment.

A single roof raised in ETFE, a type of thermoplastic polymer with high resistance to heat and UV rays, as well as reducing CO2 emissions, essential for a greenhouse pavilion that protects the exotic and native collections chosen because they are the most representative ecosystems in the different Colombian regions and those most threatened by desertification and exploitation of natural resources. The native collection of the slope of the mountain, surrounds the 4 collections or exotic biomes. In turn, it perforates the building and the roof by means of strips of trees that create patios inside the building. The yards help to collect rainwater by creating a filtration process for water reuse in the project. The place recovers the natural balance of the ecosystem.

Project description as provided by the authors.

In the town of Usme, south of the Colombian capital Bogotá, the Entre Nubes Ecological Park is surrounded by the southeast hills (2800 meters above sea level). In the middle of the most important ecological structure of the city, the constant threat of illegal mining and the informal settlement of houses has devoured and unhinged a large part of the mountains that make it up, endangering the continuity of the ecosystem. In this urban / natural context, a greenhouse pavilion is proposed that seeks to reshape the silhouette of the mountain from the architecture. It creates a space that recognizes the importance of the recovery, protection and preservation of the environment and biological biodiversity through educational and pedagogical spaces for the city.