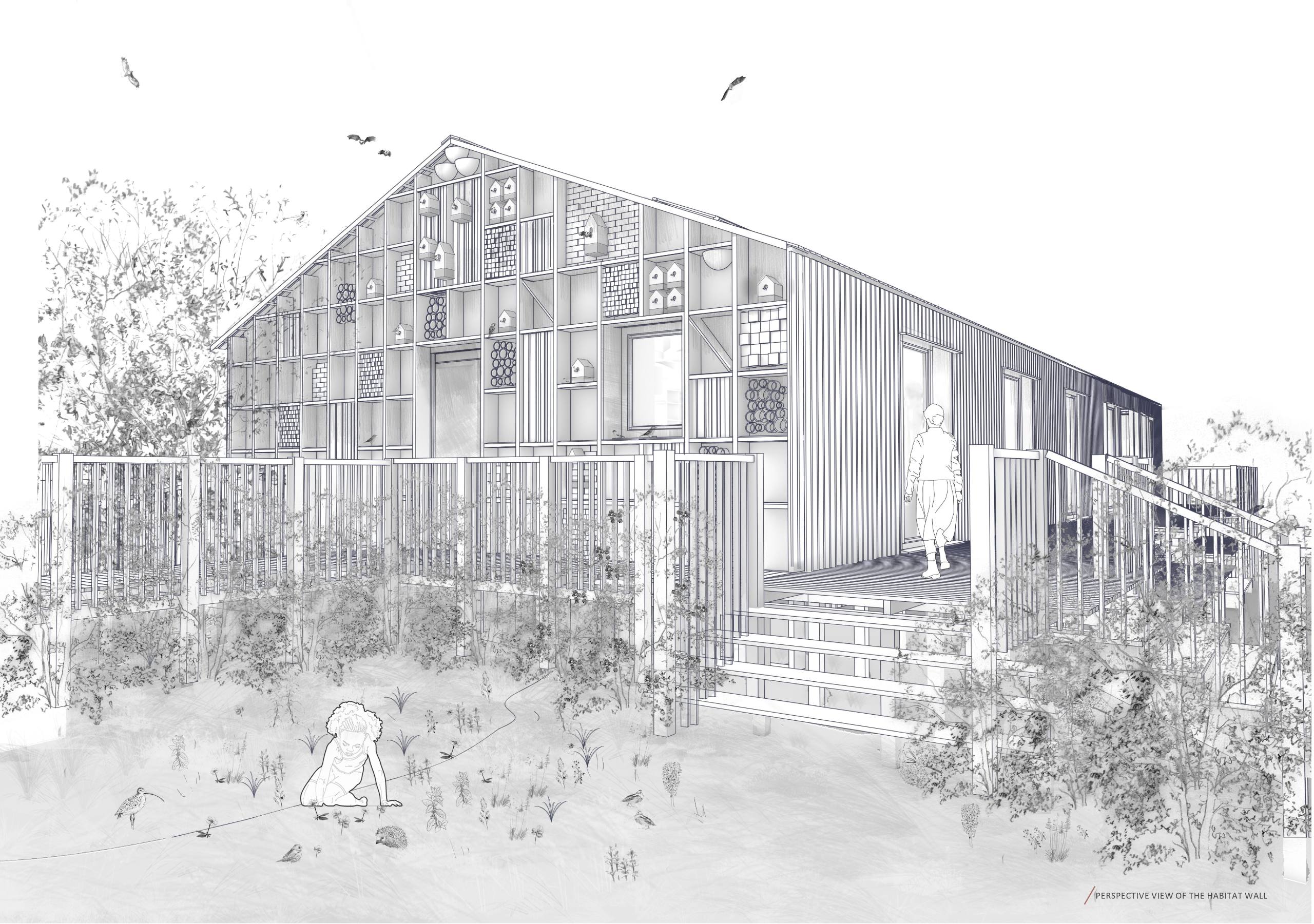 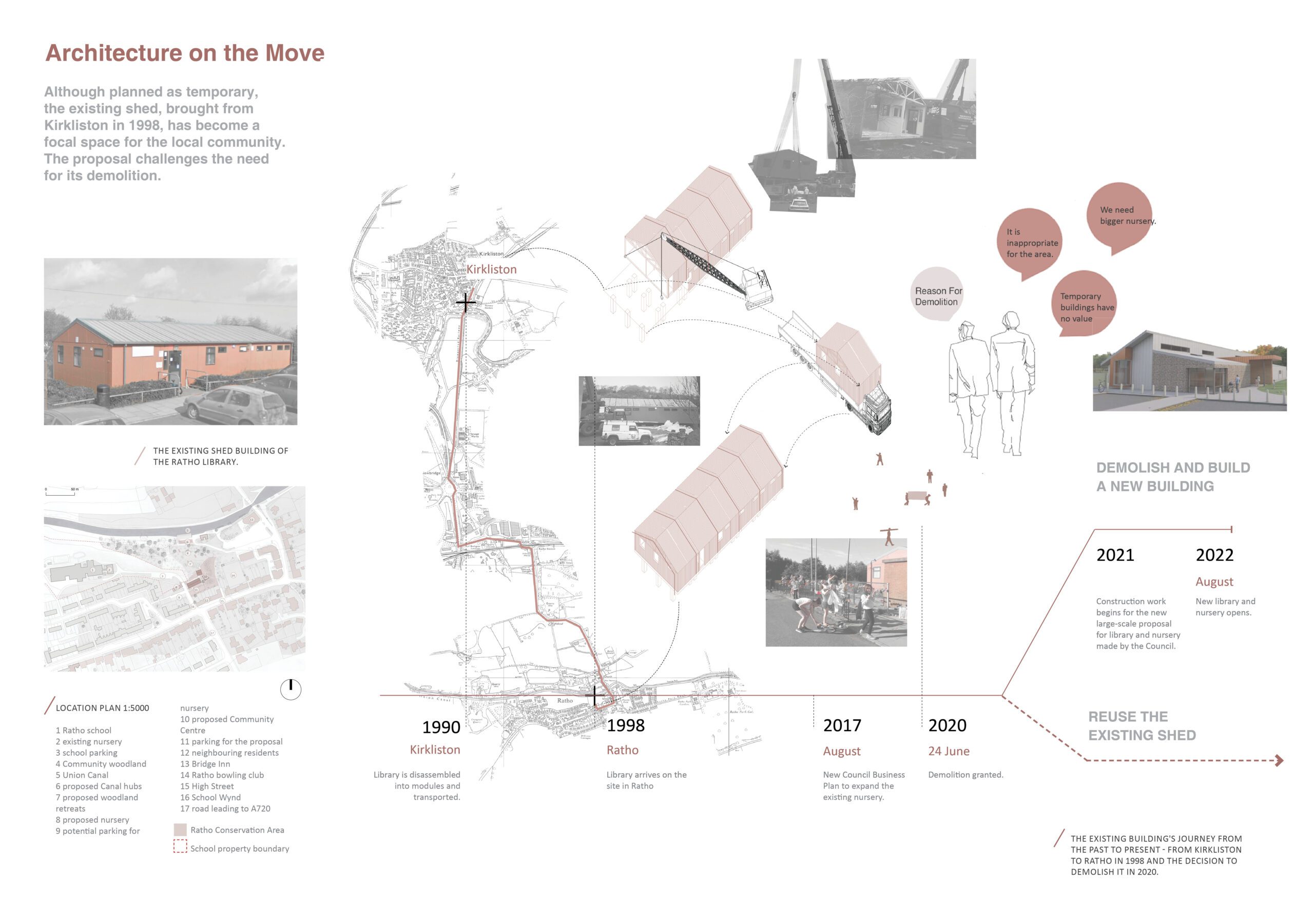 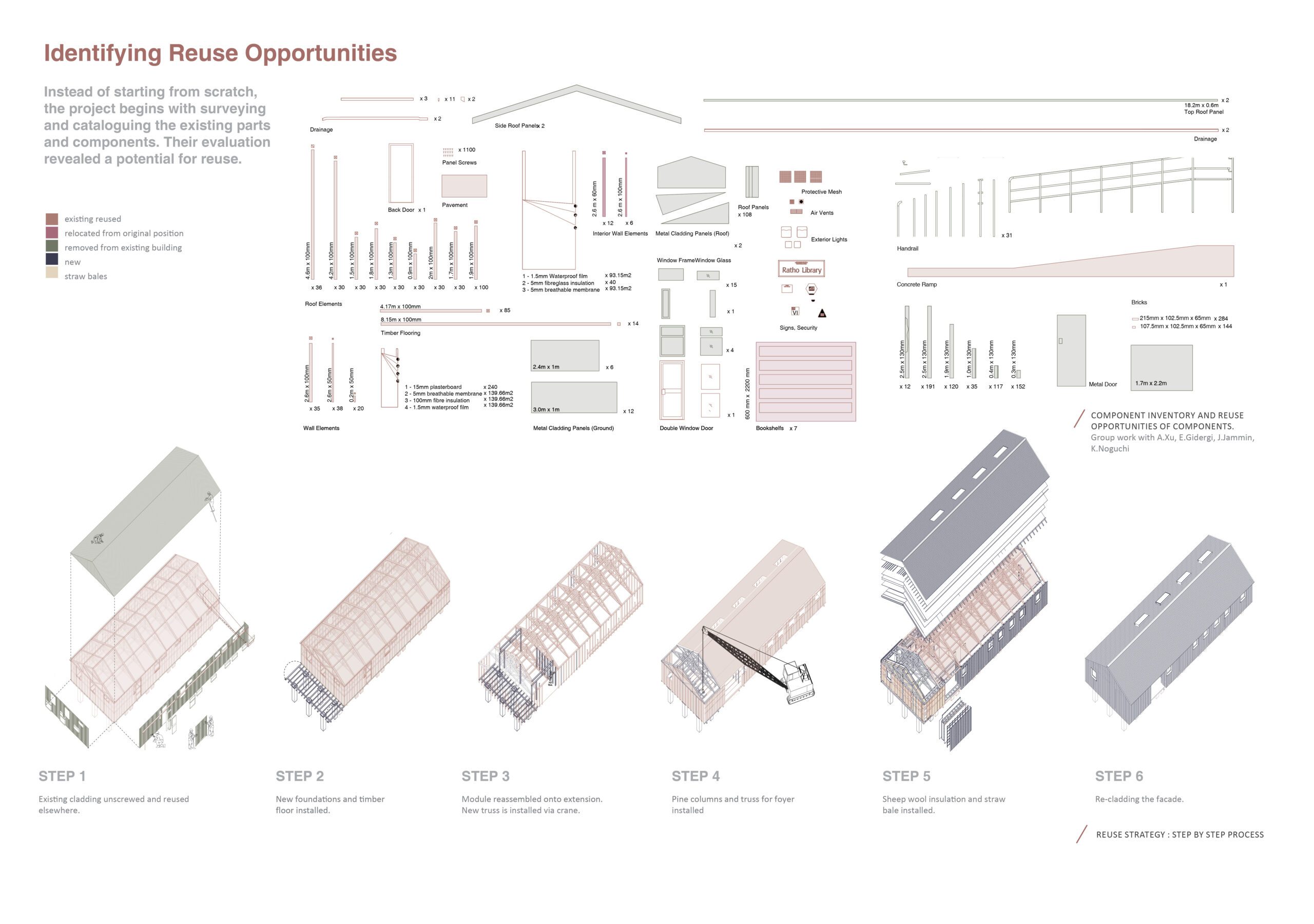 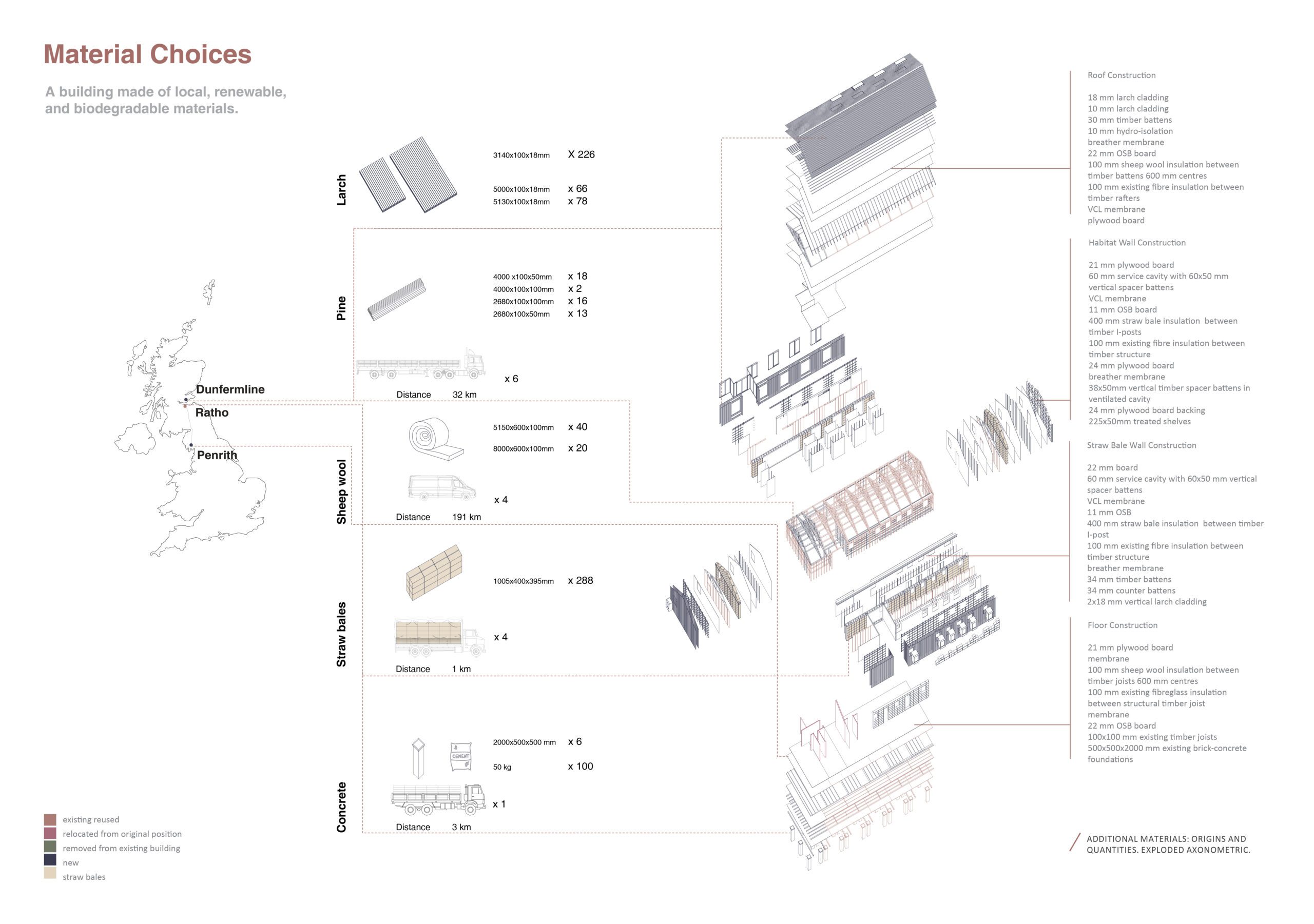 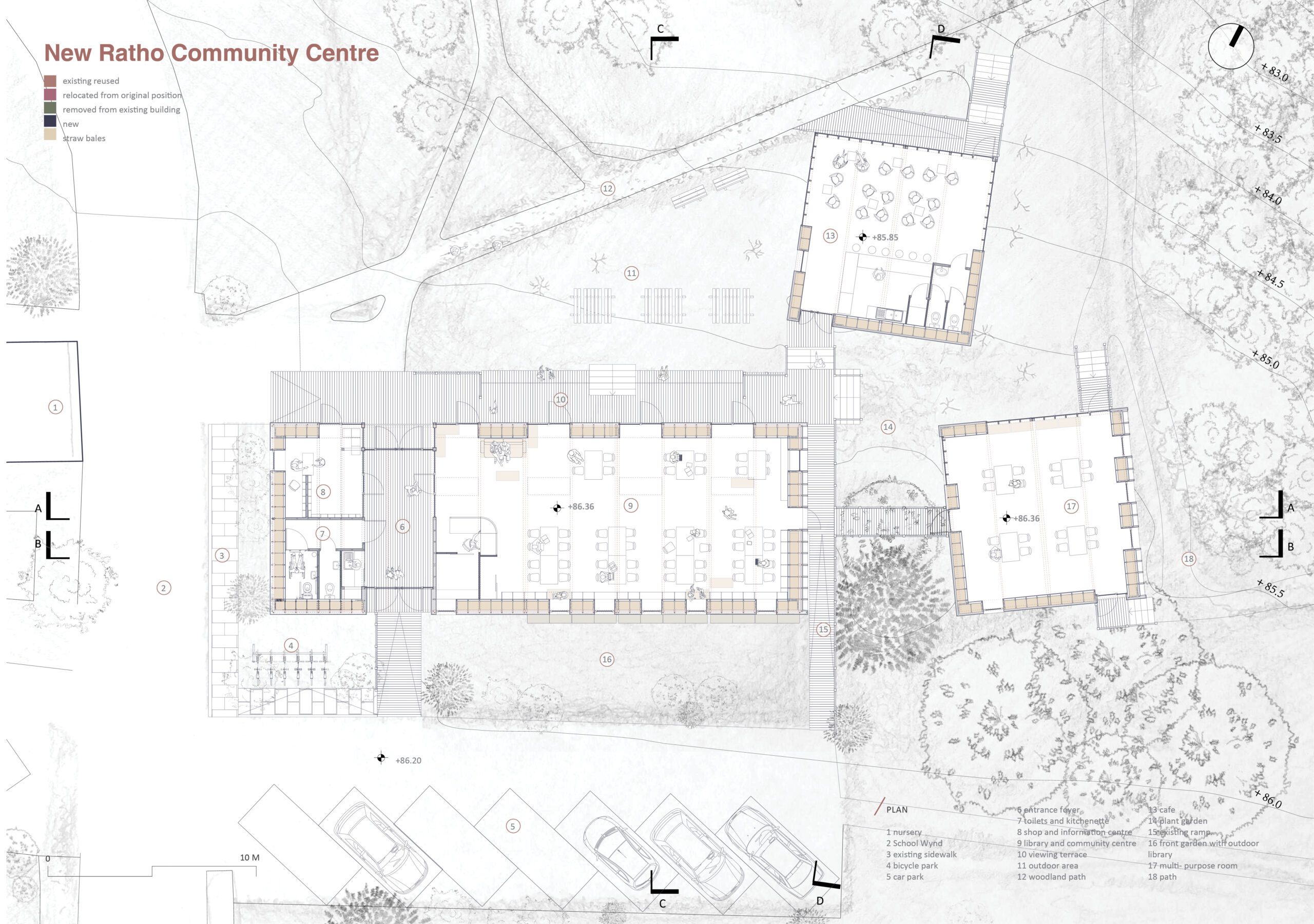 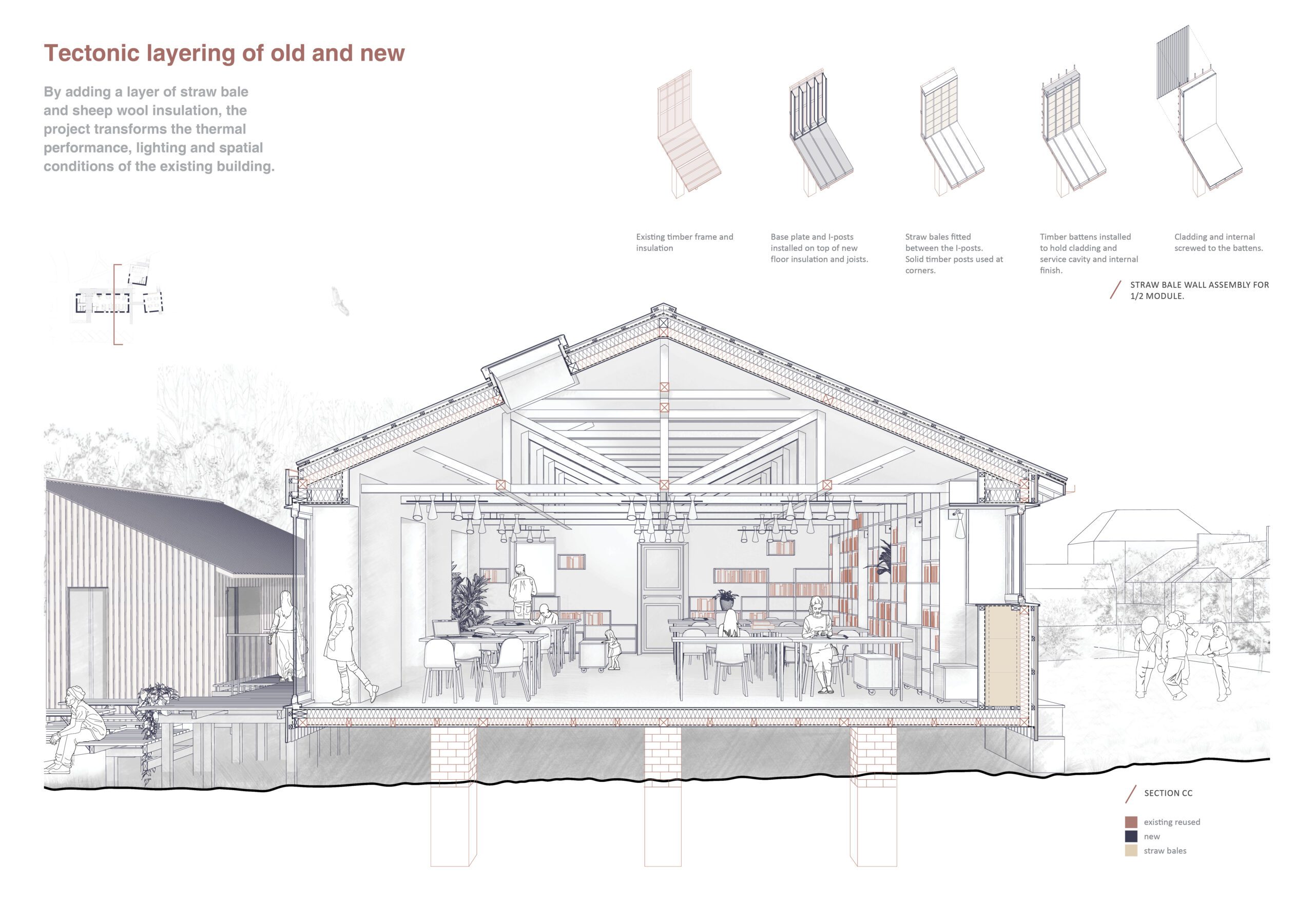 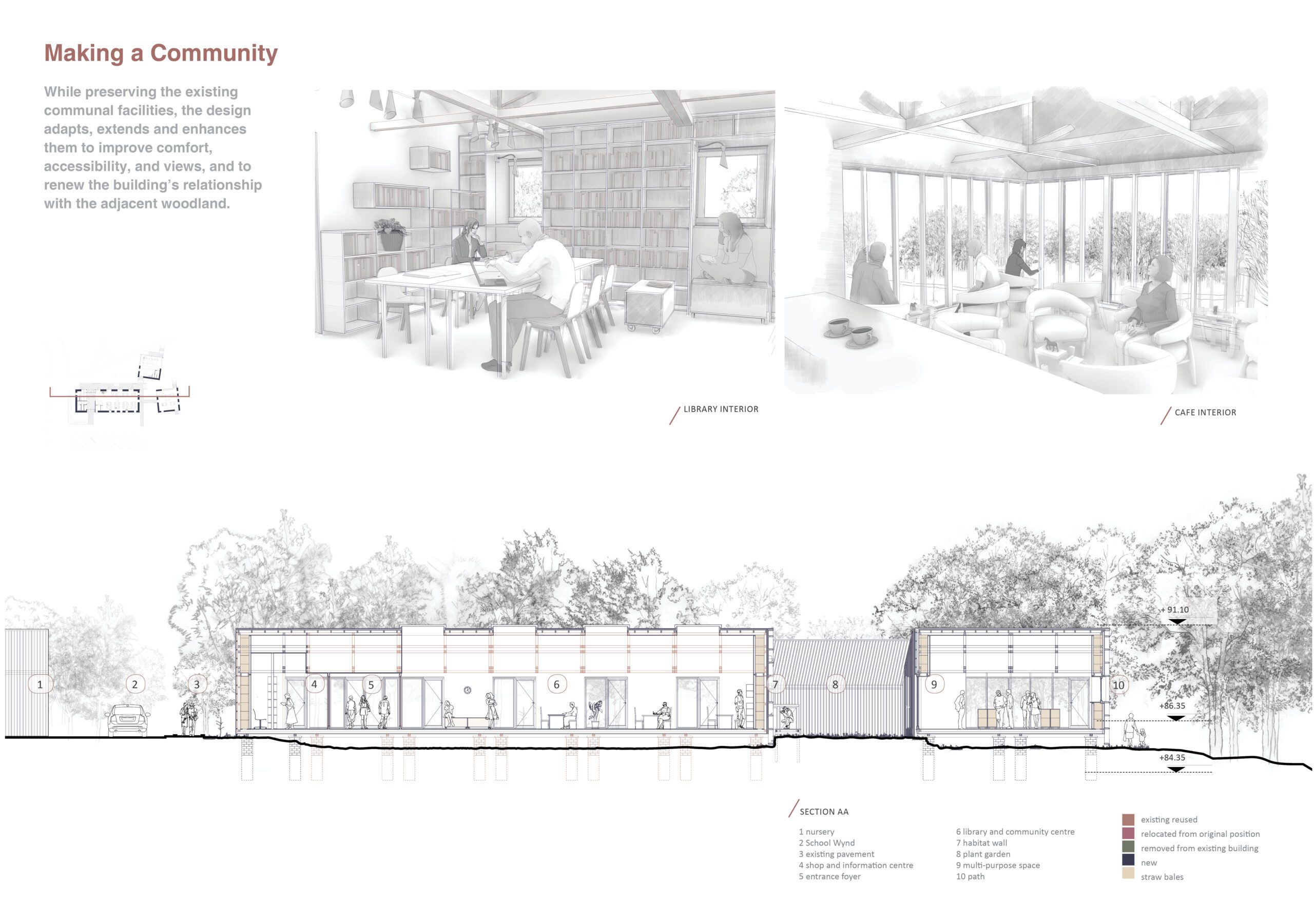 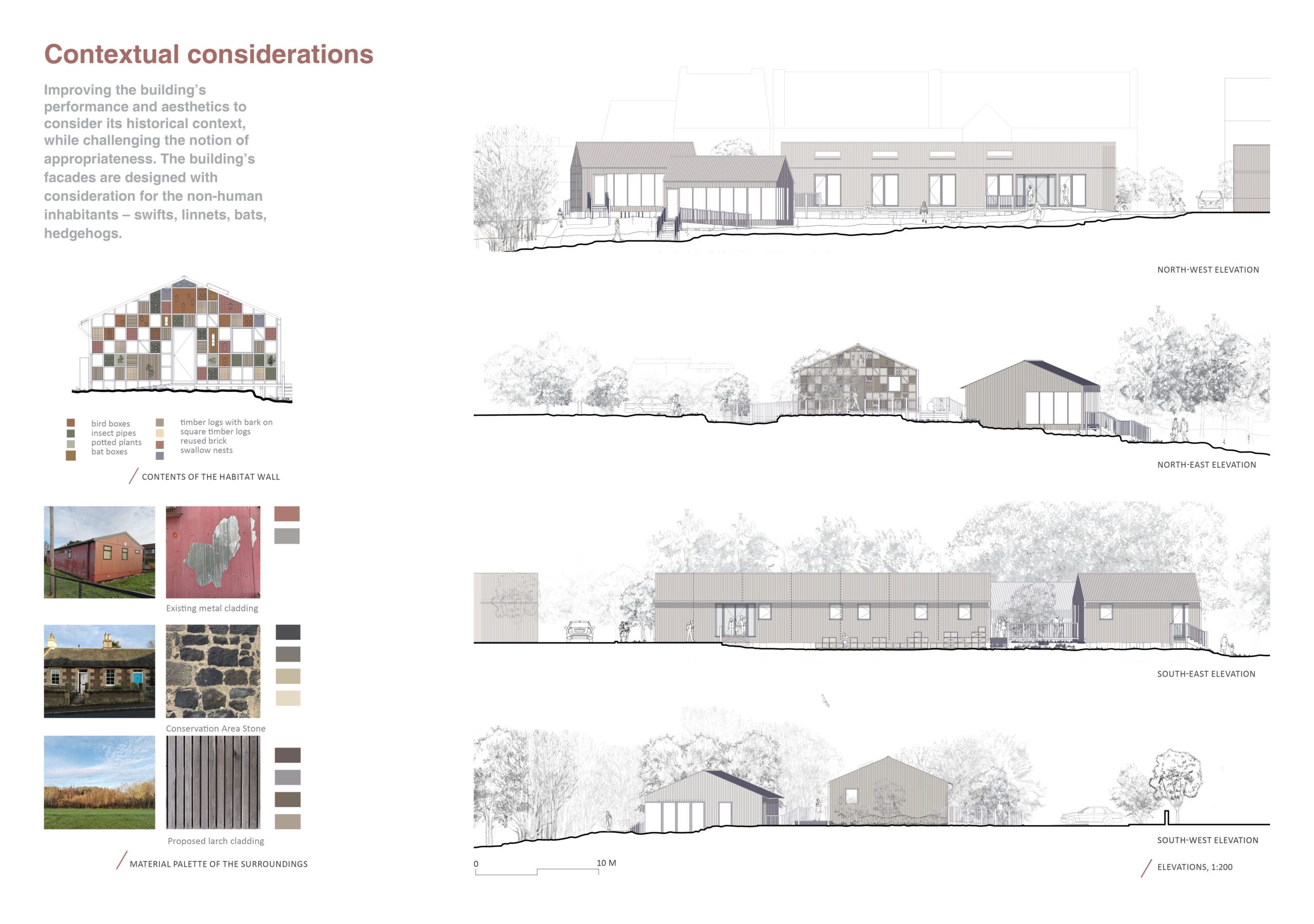 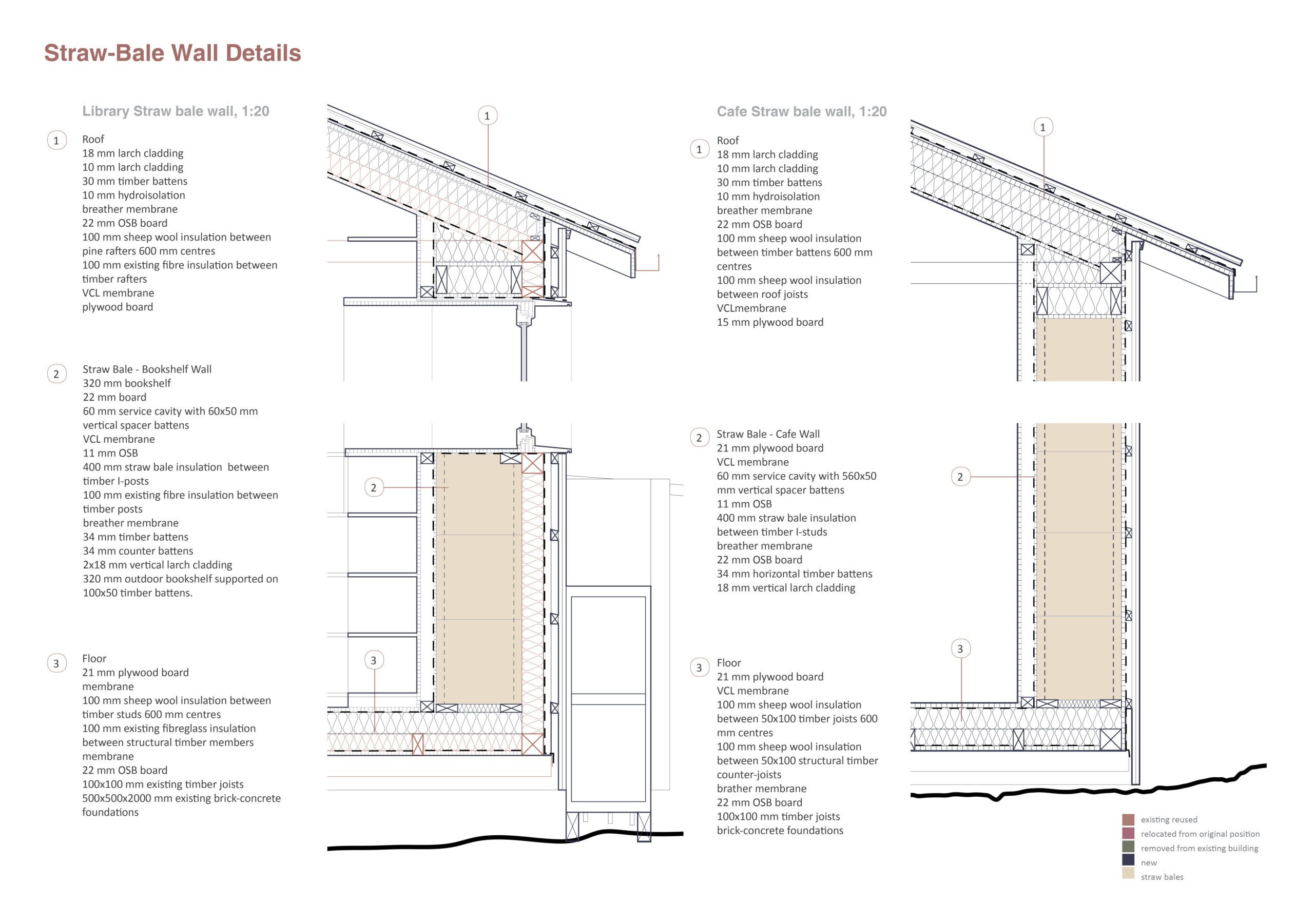 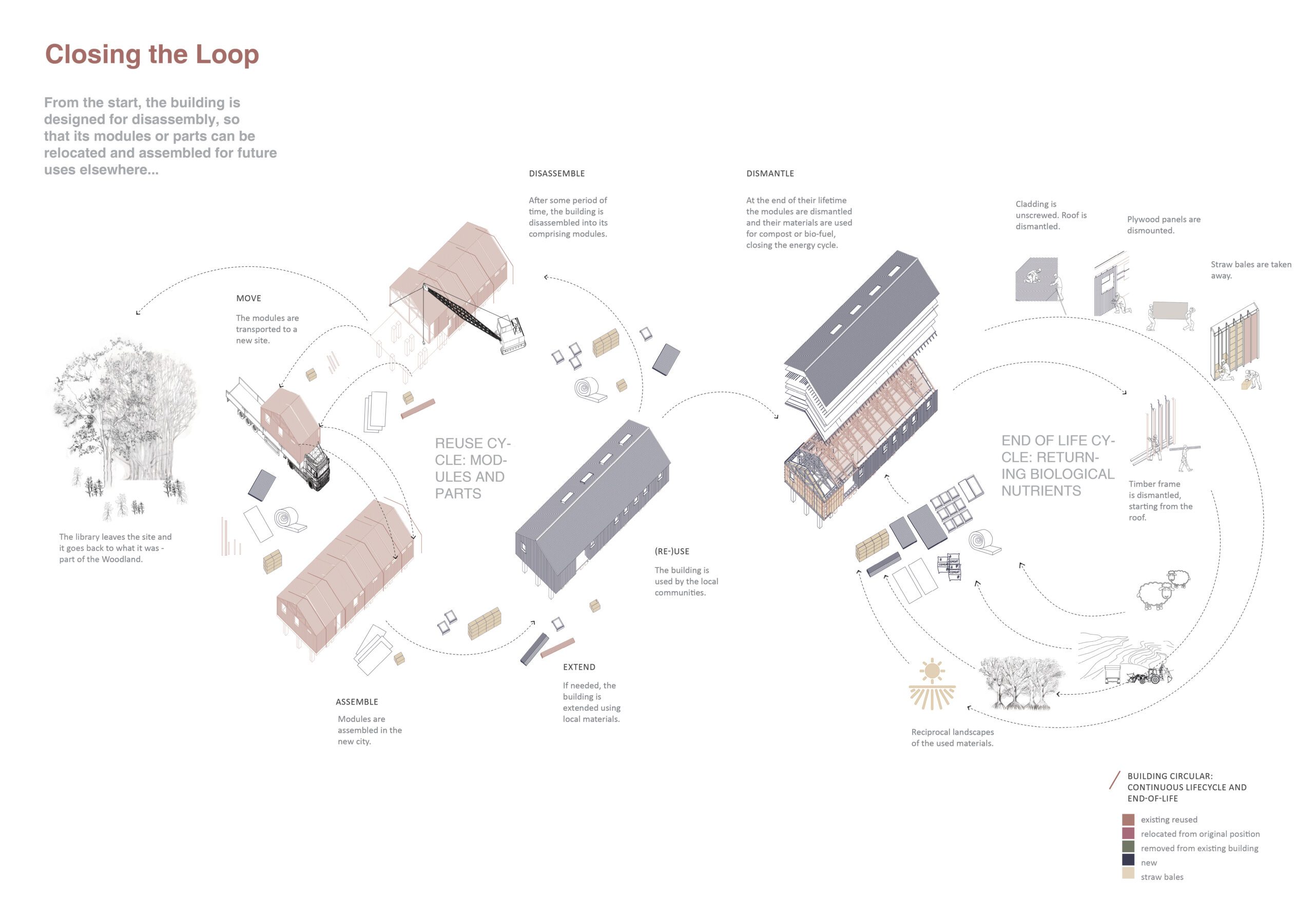 Project description as provided by the author:

Within the context of the circular economy, the project explores the potential of reusing a soon-to-be-demolished library in Ratho, West Edinburgh, through the use of locally sourced biodegradable materials, including straw bale and larch cladding. The proposal is a reaction to the linear model or resource use, in which buildings are routinely built, used and demolished, producing vast amounts of CO2. The project reuses a building that would be typically considered of no value—a modest shed—questioning how architects might transform notions of preservation, permanence and appropriateness to respond to the climate emergency, and by considering a building’s specific social, environmental and historical context. The proposal enhances the existing modular structure and adapts it to promote a variety of functions and address many of its inefficiencies concerning thermal performance, comfort, durability and accessibility.

ARCHTIECTURE ON THE MOVE
Although planned as temporary, the existing shed, brought from Kirkliston in 1998, has become a focal space for the local community. The proposal challenges the need for its demolition. Situated within the Conservation Area of Ratho and next to the Community Woodland, the library is a modular building originally located in Kirkliston. Despite its nomadic and temporary nature, the structure has been on the site for 21 years and has become a centre and reference point for the Ratho community, one where people from all ages gather to read, play games, celebrate, and share significant collective events. A demolition permit was granted on 24 June 2020 in order to redevelop the site and provide supplementary spaces and functions. The project addresses these additional needs but challenges the demolition of the shed, recognising both its significance for the local community and its embodiment of energy and carbon.

IDENTIFYING REUSE OPPORTUNITIES
Instead of starting from scratch, the project begins with surveying and cataloguing the existing parts and components. The limited material palette, mechanical dry joints and modularity of the building parts allow most of the materials and components to be reused with minimum waste. By foregrounding the intrinsic value of a building or material, its history, and embodied energy—and not only its economic value or perceived status—the project reconsiders how we decide what is worth (or not worth) preserving.

MATERIAL CHOICES
A building made of local, renewable, and biodegradable materials. The choice of materials for the library retrofit and extension was governed by a careful analysis of the corresponding production processes, performance, durability, embodied carbon and local availability, as well as by the requirements of dry construction. Straw bale, obtained from the agricultural area surrounding Ratho, was chosen due to its sustainability and performance but also pays tribute to the site’s agricultural past. The quantities and distances involved were estimated and the associated logistical challenges considered.

MAKING A COMMUNITY
While preserving the existing communal facilities, the design adapts, extends and enhances them to improve comfort, accessibility, and views—and to renew the building’s relationship with the adjacent woodland. Preserving its modular logic, the existing library building is extended by shifting one of its modules to accommodate an entrance foyer. In addition, two new modular buildings are created, and positioned so as to not disturb the existing trees. The modules house different functions with varying degrees of openness to the exterior and different straw bale wall assemblies depending on programme and orientation. The design reinforces the communal use of the building with wrap-around timber walkways which open up to and frame the surrounding topography and trees.

TECTONIC LAYERING OF OLD AND NEW
By adding a layer of straw bale and sheep wool insulation, the project transforms the thermal performance, lighting and spatial conditions of the existing building. Previously, the shed was largely closed-off from the surrounding site. The proposal opens it up to bring in more light and provide views to the surroundings. While improving the insulation properties of the existing timber load-bearing structure, and adding a thick layer of straw bale insulation on its inner side, the proposal also negotiates a more open and intimate connection to the woodland and its seasonal changes. The interior spaces were designed to allow for a maximum degree of flexibility of the layout. The bookshelves are placed along the walls to leave the main space free, and movable straw furniture allows the layout to change according to varying needs.

STRAW-ING ARCHITECTURE
Harvesting insulation from the surrounding fields and applying it to the existing structure. The straw bales are fitted between timber I-posts assembled on site. Due to their light weight and small size, they can be easily installed by hand. The posts align to the existing timber structure, and while they don’t serve the main load-bearing function in the library, they allow dry construction to be adopted and help support the additional load of the roof. The thick straw wall affords new ways of inhabiting the existing spaces by creating niches in the walls. The whole wall is screwed together to allow easy assembly, disassembly and reuse.

INTERSECTING HUMAN AND ANIMAL COMMUNITIES
The building’s facades are designed with consideration for the non-human inhabitants – swifts, linnets, bats, hedgehogs. The design is influenced by the animal species present on the site and by their specific habitat requirements. The proposal seeks to reinforce the biodiversity on the site by preserving the existing natural features, planting new trees, and creating a habitat wall to provide shelter, nesting spaces and food resources, while also prompting the community to learn about (and take care of) the local wildlife. The openings of bird boxes are sized to allow different species to inhabit them. If the interior of the library celebrates knowledge, this exterior ‘bookshelf’ celebrates the variety of animals that may occupy it.

CONTEXTUAL CONSIDERATIONS
Improving the building’s performance and aesthetics to consider its historical and environmental context, while challenging the notion of appropriateness. In response to the local climate, biodiversity, orientation of the site, and specific programmatic requirements, the design aims to improve internal comfort through passive means. Cross ventilation and better light condition are facilitated by large operable windows to the north and south. Deep eaves serve to avoid overheating, collect rainwater and protect the straw bales. The Conservation Area Guidelines impose specific requirements concerning building materials. These concerns were both addressed and challenged by using vertical larch cladding. Its choice stands for a more sustainable and respectful approach to the site and the building, promoting a dialogue with both the woodland and the historical area.

CLOSING THE LOOP
From the start, the building is designed for disassembly, so that its modules or parts can be relocated and assembled for future uses elsewhere. The modular design of the building and the materials chosen for it promote its continuous circulation in technical and biological nutrient cycles. On one side, cycles of construction and deconstruction may allow the building modules to form temporary and nomadic architectures across different sites, at different scales of reuse, and in order to address changing needs. With proper maintenance, the lifespan of the materials might allow these processes to stretch over a hundred years. Eventually, the biodegradable materials used, such as straw, sheep wool and wood, will close the material cycle and the sequestrated carbon will be returned to the earth. By considering the building’s history of movement and finding value in the ‘inappropriate’ and ‘temporary‘ building
components, the proposal promotes the rehabilitation, reuse, and extension of this much-loved community building, also planning for its eventual end-of-life.