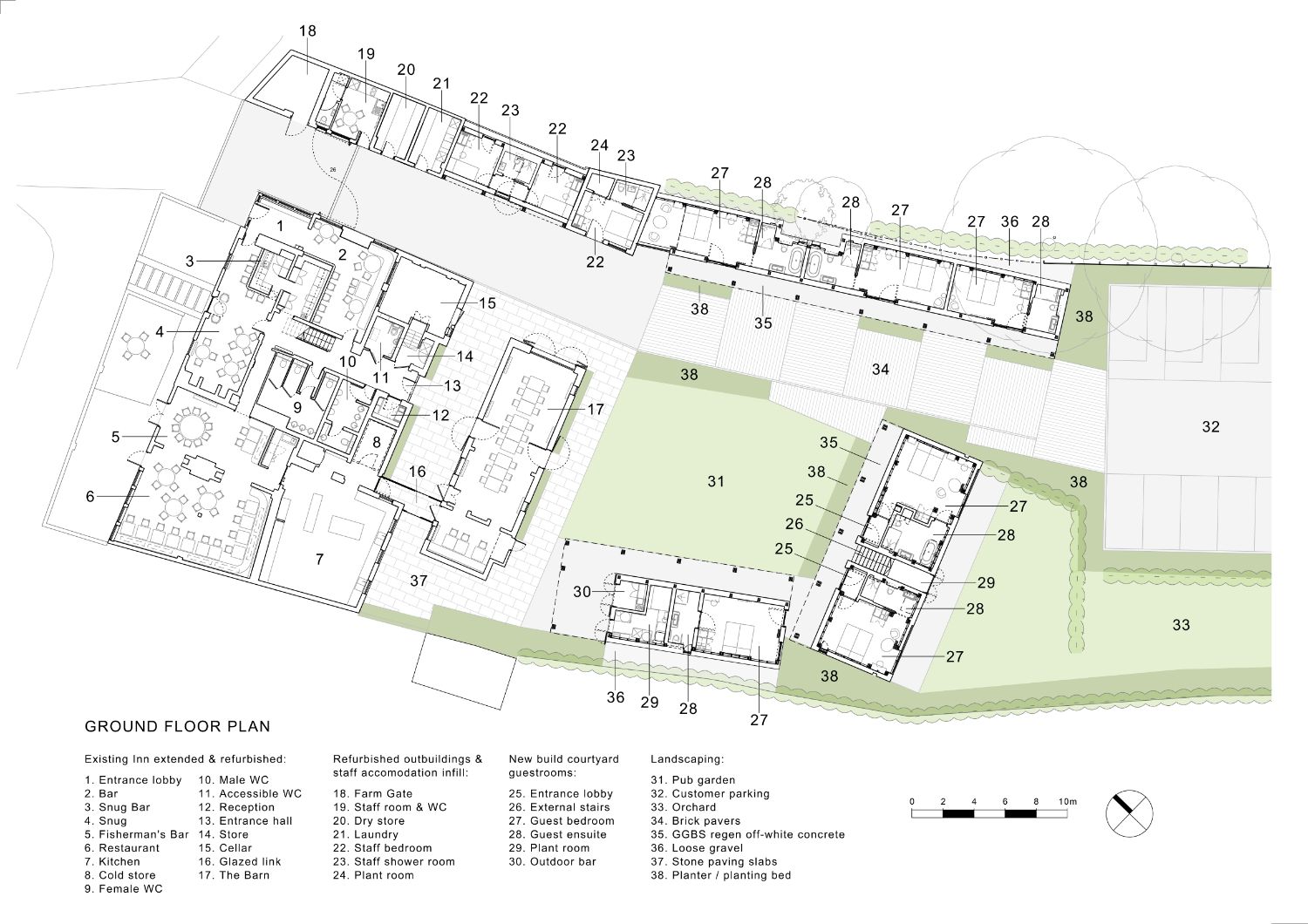 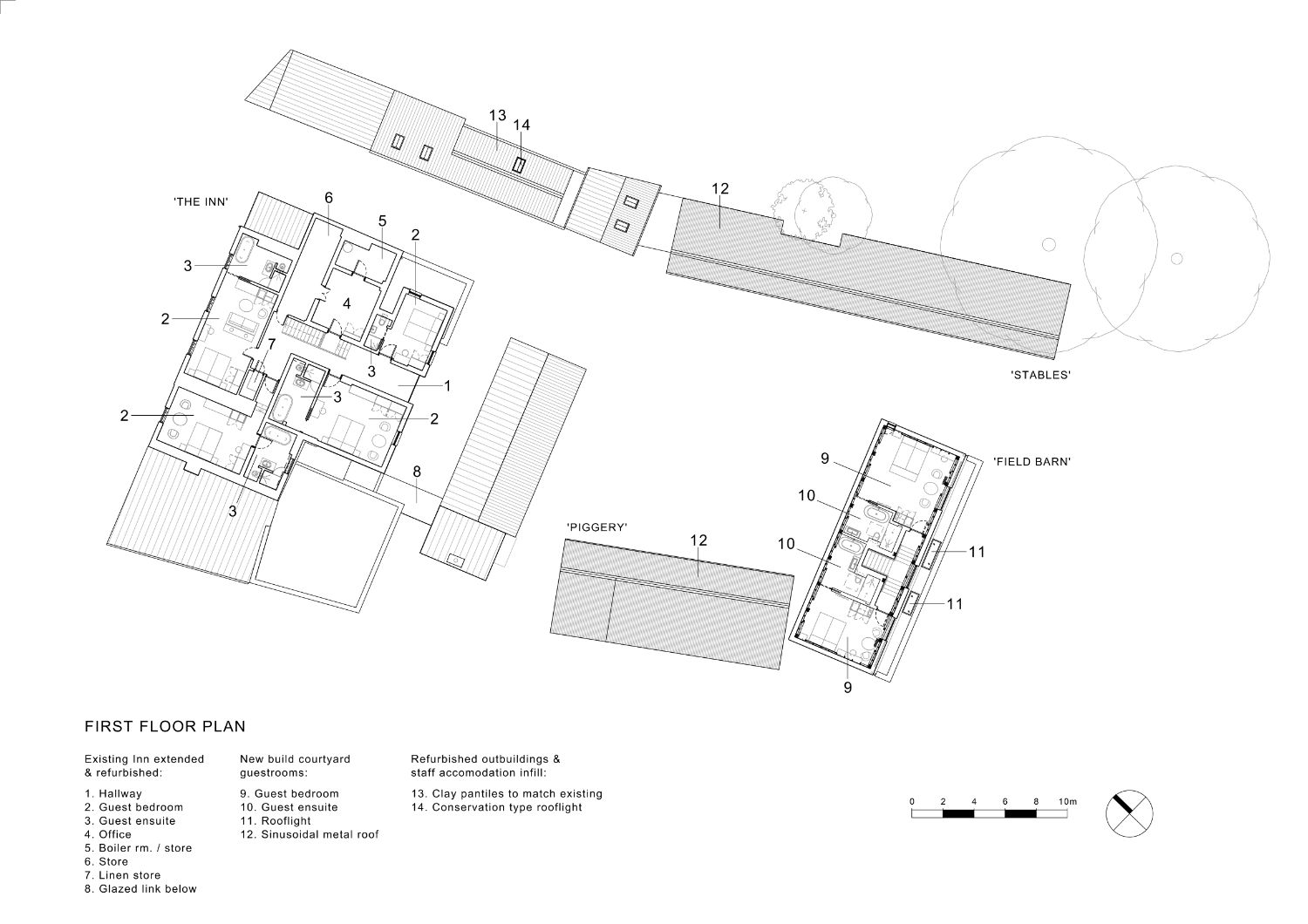 De Matos Ryan has transformed The Alice Hawthorn’s sustainability with the addition of twelve guest bedrooms and the renovation of its Grade II listed pub. At the confluence of the Rivers Ouse and Nidd, the village of Nun Monkton was historically an important Northern trade hub for the medieval river transport network, with many travellers stopping overnight. The increase in road travel saw fewer travellers passing through, which eventually led to its demise as a trade and social point. The closure of the village’s four taverns is sadly consistent with socio-economic and legal changes impacting pubs across the country. Named after a famous 19th Century racehorse, The Alice Hawthorn is the village’s last remaining pub. In recent years, this critical meeting point and social hub for the local community was in economic decline and had come under threat.

De Matos Ryan Director Angus Morrogh-Ryan comments, “Creating an innovative new economy around assets such as the village pub is essential to the health and well-being of any rural community. The tranquil village of Nun Monkton lures visitors from afar to see the tallest maypole in England and one of the last remaining working greens in Yorkshire. Before our client took ownership in 2013, the pub struggled commercially and had even closed for a period in 2007. Despite significant investment in a new kitchen and the wholesale refurbishment of the ground floor pub spaces, it was not yet a sustainable business. To become solvent long term, it needed to increase its appeal to a broader audience. Therefore, the brief was to provide tourists, as well as the local community, with a high-quality but affordable basecamp from which to enjoy the surrounding landscape and visitor attractions.”

Close, collaborative consultations with Harrogate Borough Council and the local community informed the project’s design. During these consultations, one villager noted that arriving home at night and seeing the pub lights on always gave them a warm feeling of contentment and calm. To see these switched off permanently would ostensibly remove a key organ of the community. It was therefore incredibly important to save the pub from extinction. Community needs were considered at every stage of the design process and the scheme was tweaked, changed and reconfigured to acknowledge local feedback. The redevelopment has created new revenue streams for the restaurant and bar business, improved visitor footfall and dwell time and, most critically, increased propensity to spend within the local economy.

The scheme includes twelve ensuite guest bedrooms, four on the first floor of the pub and eight around a new courtyard, which extends the village green into the pub’s rear garden. The project takes its inspiration from the Norse ‘garth’ (‘grassy cloister’ or ‘clearing in the woods’), creating a sense of quiet enclosure and a notional extension of the village green: a place of gathering. The design reflects the character of the various informal farmsteads that surround the green, which continues to be grazed by cows and other animals. The home-grown Douglas fir framed buildings use authentic agricultural building materials, such as galvanised corrugated steel roofing and larch cladding, to create the sense that the animals have only recently moved out. A simple and honest construction typology ensures that the project looks like the way it was built. The guest bedrooms are supported by new ancillary service areas, including housekeeping and linen stores, and staff accommodation.

The new timber frame buildings include the Sheds, Field Barn, Stables and Tack Room. Double member ‘cloister’ columns engage stainless steel feet sitting on cast concrete upstands. Adjacent to the front gate, the Sheds is a single-storey infill building between existing brick outbuildings with two staff bedrooms and a bathroom. It is clad in larch with a pan-tile roof to match the outbuildings. The Field Barn is a south facing, two-storey structure with four guestrooms. The lower level is clad in larch while the upper level is sinusoidal galvanised steel. There are no windows to the north and west to prevent overlooking and light pollution to the neighbours. The Tack Room, a single-storey structure with a wheelchair accessible guestroom, sits adjacent to the west boundary and the Field Barn. It also provides shelter to the outdoor kitchen, pizza oven and pub garden bar. Adjacent to the east boundary, the Stables is a single-storey extension structure with three guest rooms. Both the Stables and the Tack Room are clad in larch with a sinusoidal galvanised steel roof and back wall. Each guestroom is announced externally by a hand painted motif of the room names, such as Saddle, Stirrup, Flax, Barley, Wheat and Hay. Internally, in contrast to traditional pub interiors, the new build elements have no plaster and are lined with larch boarding and poplar plywood. Subtle distinctions between the timber species are blurred by a tinted treatment. The only internal wall decorations are lino cut prints created by village primary school children, who have a vegetable patch at the rear of the garth.

Sustainability is at the heart of the project’s design. A ground source heat pump provides heating and hot water, supplied by bore holes and supported with high levels of non-combustible mineral wool insulation and airtightness to a standard higher than current Part L2A building regulations. The timber frame buildings are naturally ventilated through use of high-level clerestory windows and rooflights on actuators. Solar gain is reduced by roof overhangs, which offer shading. LED and low energy lighting, as well as low volume water appliances, have been fitted throughout. The sustainable drainage system includes permeable paving and surface water attenuation tanks concealed below the pub garden. A particular challenge was to develop a 1-hour fire resisting timber frame wall within 1m of the site boundaries. This was resolved by employing a fire resisting sheathing internally, thus avoiding carbon heavy blockwork. To ensure accessibility for all, level threshold access is provided to all buildings. On completion, the new builds scored an EPC ‘A’ rating. Biodiversity has been improved on site through extensive planting and habitat creation. The new courtyard is bounded by borders planted with native species, which also help screen the adjacent bedrooms. An orchard at the back of the site, which would have been typical of these plots in medieval times, is being re-established with fruit trees and will ultimately supply the pub’s kitchen.

Client and Nun Monkton local Kate Harpin comments, “We were very excited with the shape of the plans as they evolved, and the finished result has exceeded our expectations. We have twelve beautiful guest bedrooms, every one of them perfect in its own way. The beer garden has been flanked by the new buildings, making an atmospheric, sheltered and relaxing place to enjoy a pint and a tasty plate.  The buildings, imagined as agricultural stables, stores, and barn, work brilliantly in our setting, and I have no doubt will get even better with age and weather. However, best of all, our guests love it, and the sense of pride exuded by the staff is wonderful. Since reopening, business has never been better.”

Link to the project on the architect / engineer website: https://www.dematosryan.co.uk/archive/alice-hawthorn/