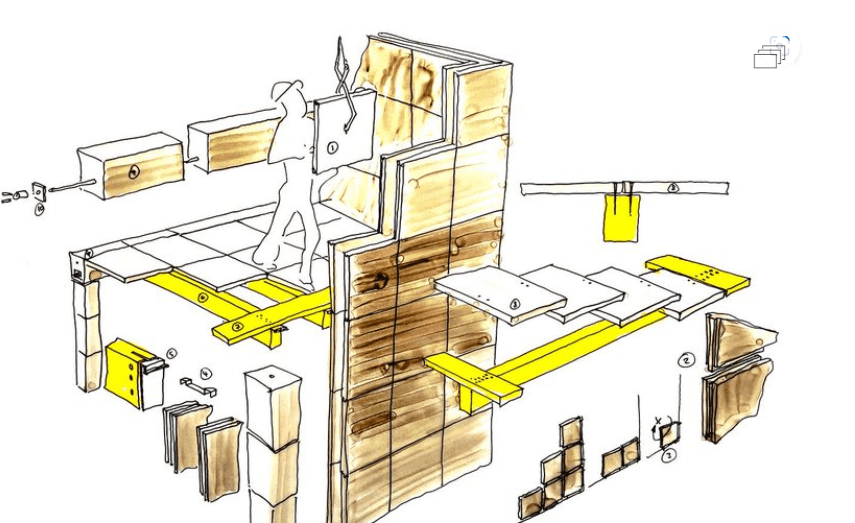 Never before has so much energy been used in all areas of life – and certainly in building. A very specific energy blip over the last 200 years, created by the availability of fossil fuels, has allowed us to produce building materials that are used the world over. The problem is that these materials –  concrete, steel, aluminium and brick – are very energy hungry and difficult to decarbonise.

On a recent trip to Mallorca I met Carles Oliver Barcelo, who works for local government housing programme IBAVI. Here, 1000 social housing units are being built entirely from local Mares stone, with concrete and steel slowly been banished from the wider building programme.

As well as citing climate change, Barcelo believes localism is important in architecture: ‘Just as the world has 7000 languages, there should be 7000 architectural styles reflecting local conditions and history,’ he says. In Mallorca this readily available sandstone underlies the entire island, and producing massive stone buildings makes a lot of sense. Architects like Giles Perraudin, continuing in the vein of Fernand Pouillon, use massive, uninsulated stone as well, which reflects the climate and material availability. This is mirrored in northern European countries rich in forests with widespread adoption of massive timber like CLT.

On the flipside, a recent Guardian article questioned the validity of London’s local style, which is increasingly composed of concrete frames with brick skins. This isn’t new at all! We are baking in style based on historical nostalgia and public perceptions of durability that is extremely damaging to the environment.

If we adopted Barcelo’s philosophy, how could we build in Britain? We need to use low energy materials, so timber and stone are the obvious choices. We need to address fire concerns and overheating, durability and public satisfaction. We do not have stone available in sizes and volumes to follow the Mallorca model; nor do we have enough timber to adopt the massive timber model. Massive timber also doesn’t help with overheating or durability and has come under considerable pressure from Grenfell-initiated fire concerns. Massive stone does not work in our environment because we need to insulate.

Perhaps there is a way of combining our smaller pieces of timber and stone to form buildings that address these concerns. As an alternative to CLT, the concept of composite timber and concrete has been explored on a number of European projects. Could the concrete – or bricks – be switched for stone?

A building with stone walls formed of 900 square 50mm tiles (1) interlocked with a tongue in groove joint (2) forming a kinetically locked wall structure (3) shows how the corner tile is fixed by the return and the floor, and how subsequent tiles take support from the first to form a reciprocating grid. This is much stronger, lighter and thinner than brickwork and requires no movement joints, wind posts or shelf angles, and is fast to build using small lifting jibs. The walls are held together with wall ties (4) and support the composite timber floor on joist hangers (5). The timber joists (6) can span 5m-7m and support a timber shear block (7) that puts compression into the floor tiles (8) when the beam bends. When a longer span is needed, stone blocks can be post tensioned into beams and columns (9). Low carbon, light, durable and flexible, the structure can be exposed internally and externally and would have enough thermal mass to avoid overheating – and would have good fire performance, not adding too much fuel.