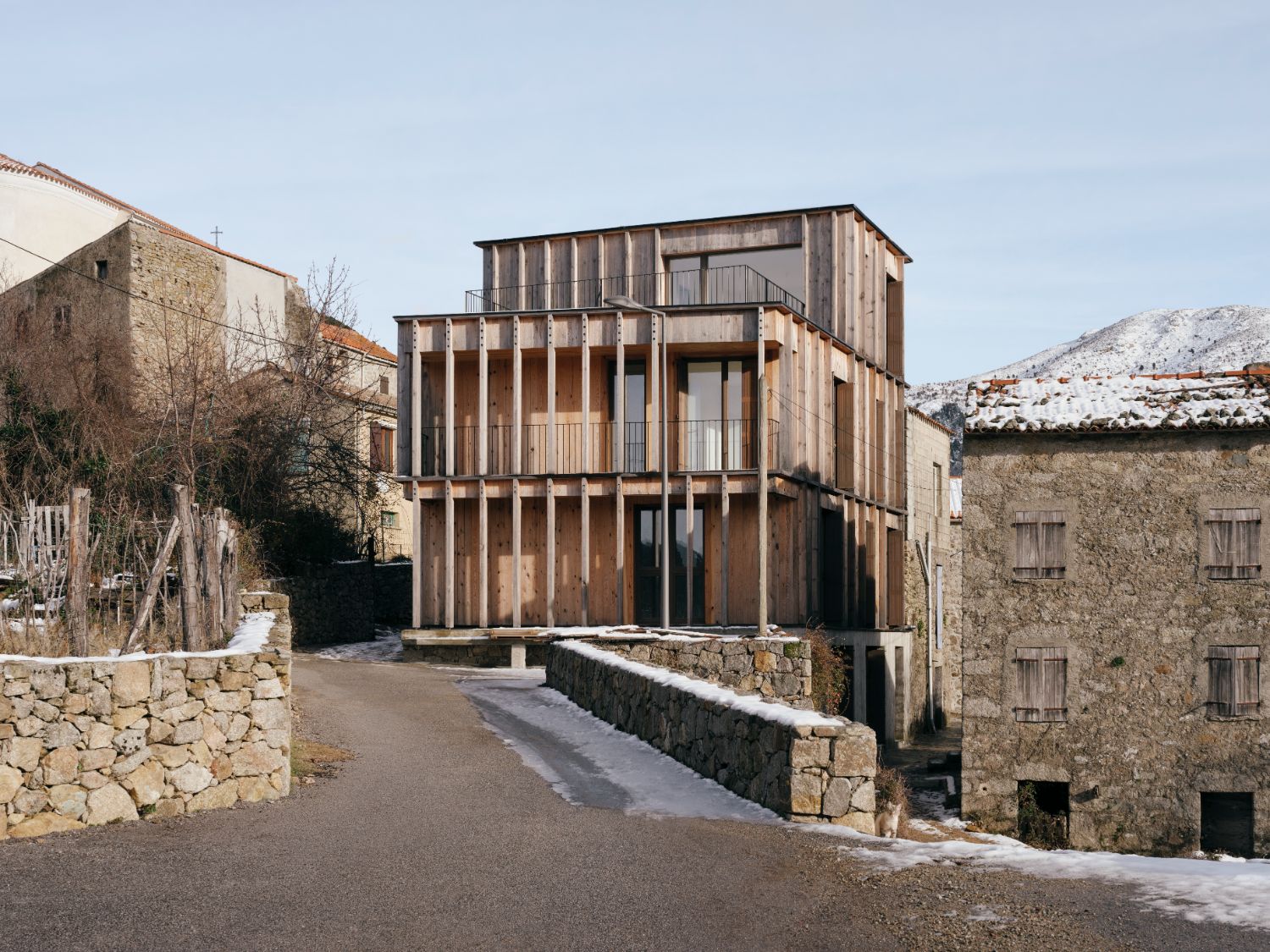 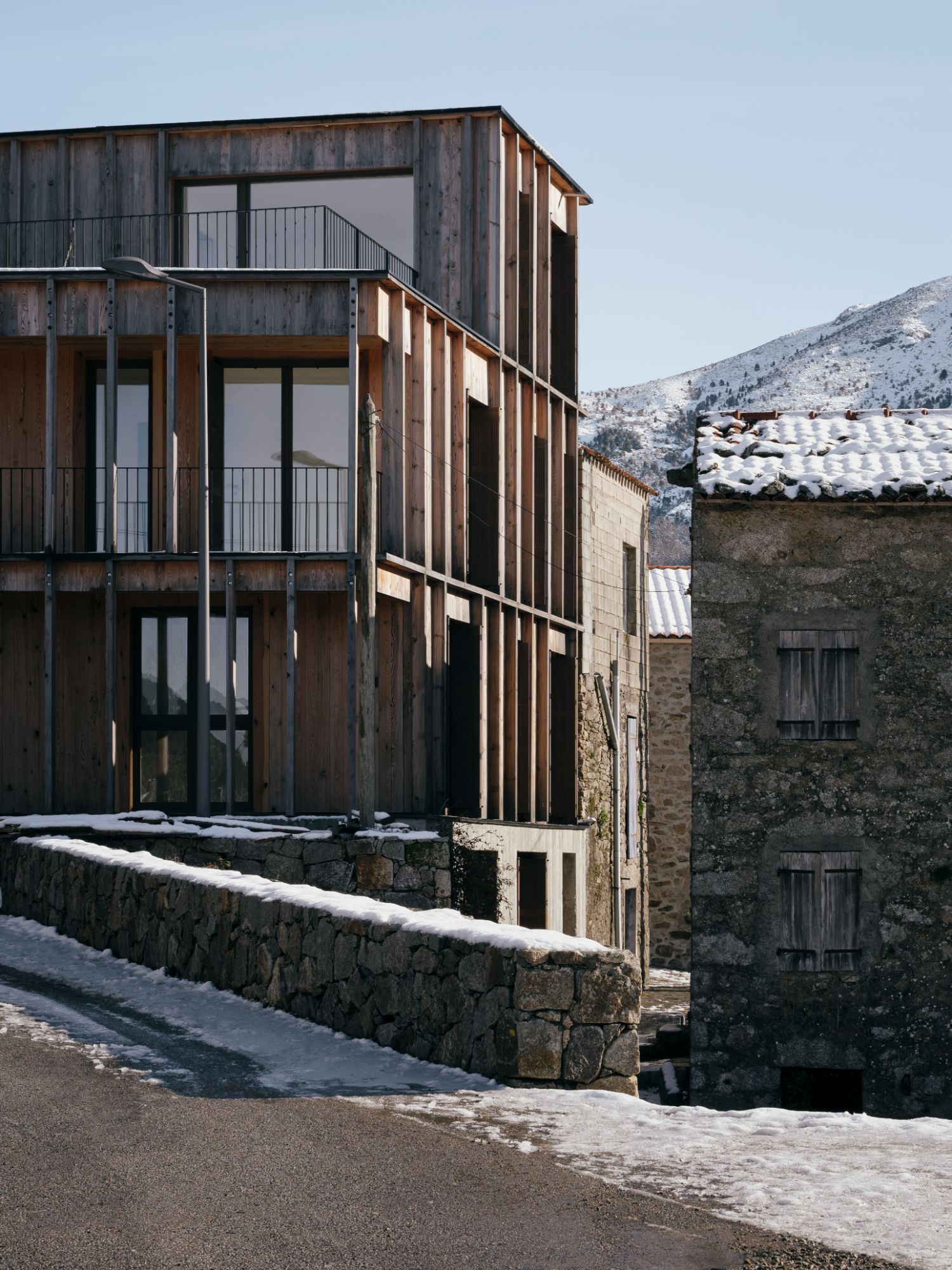 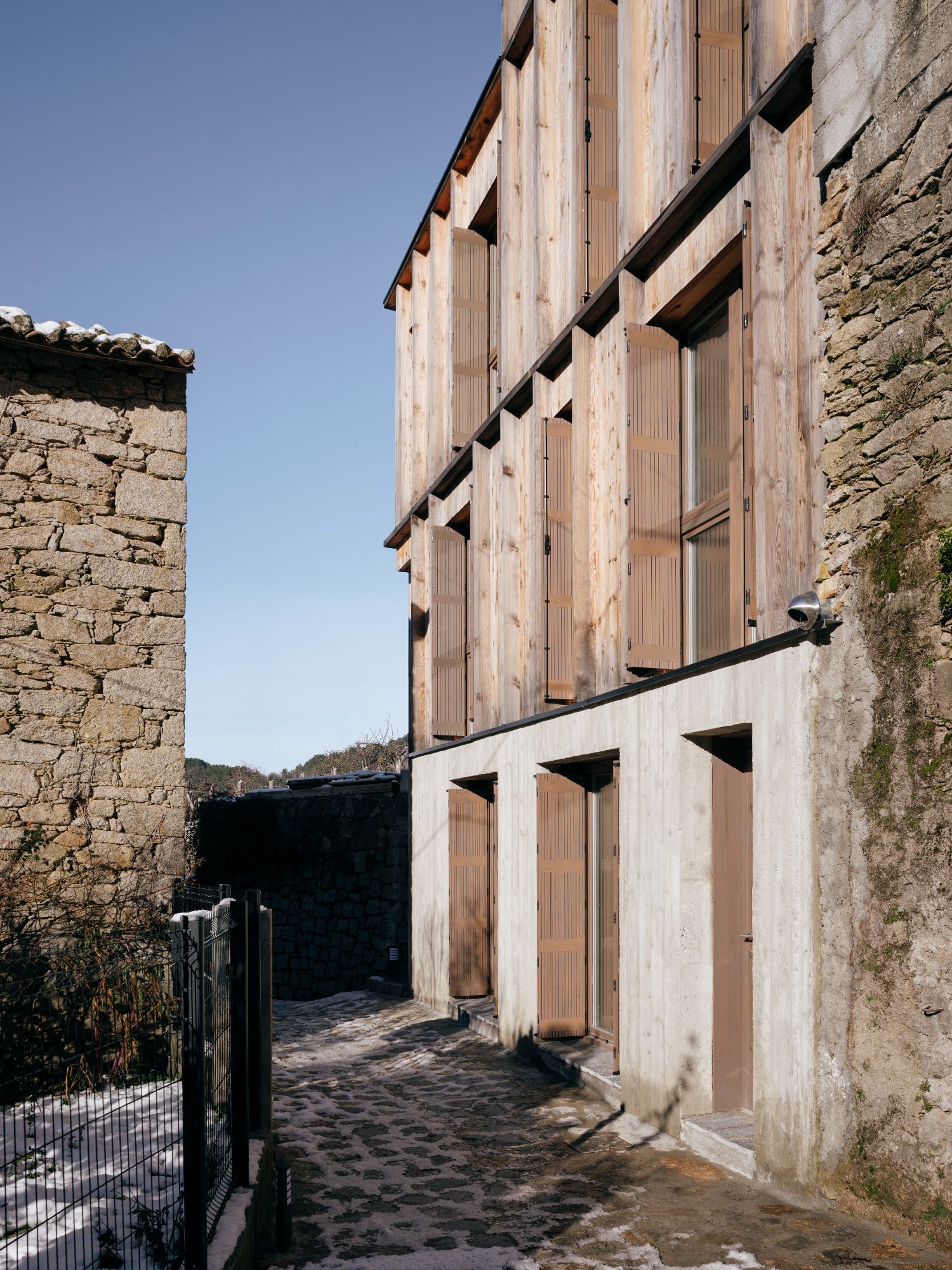 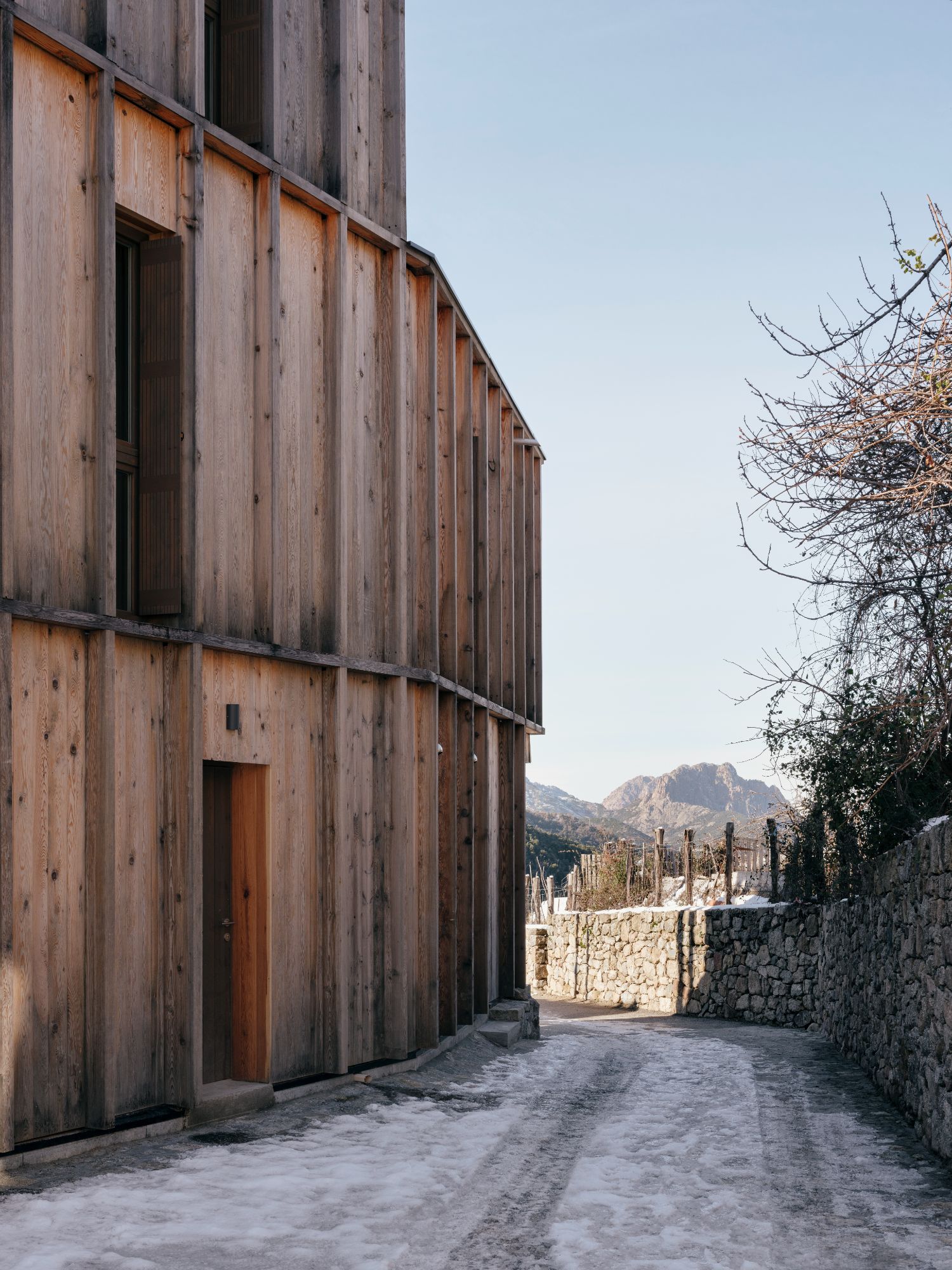 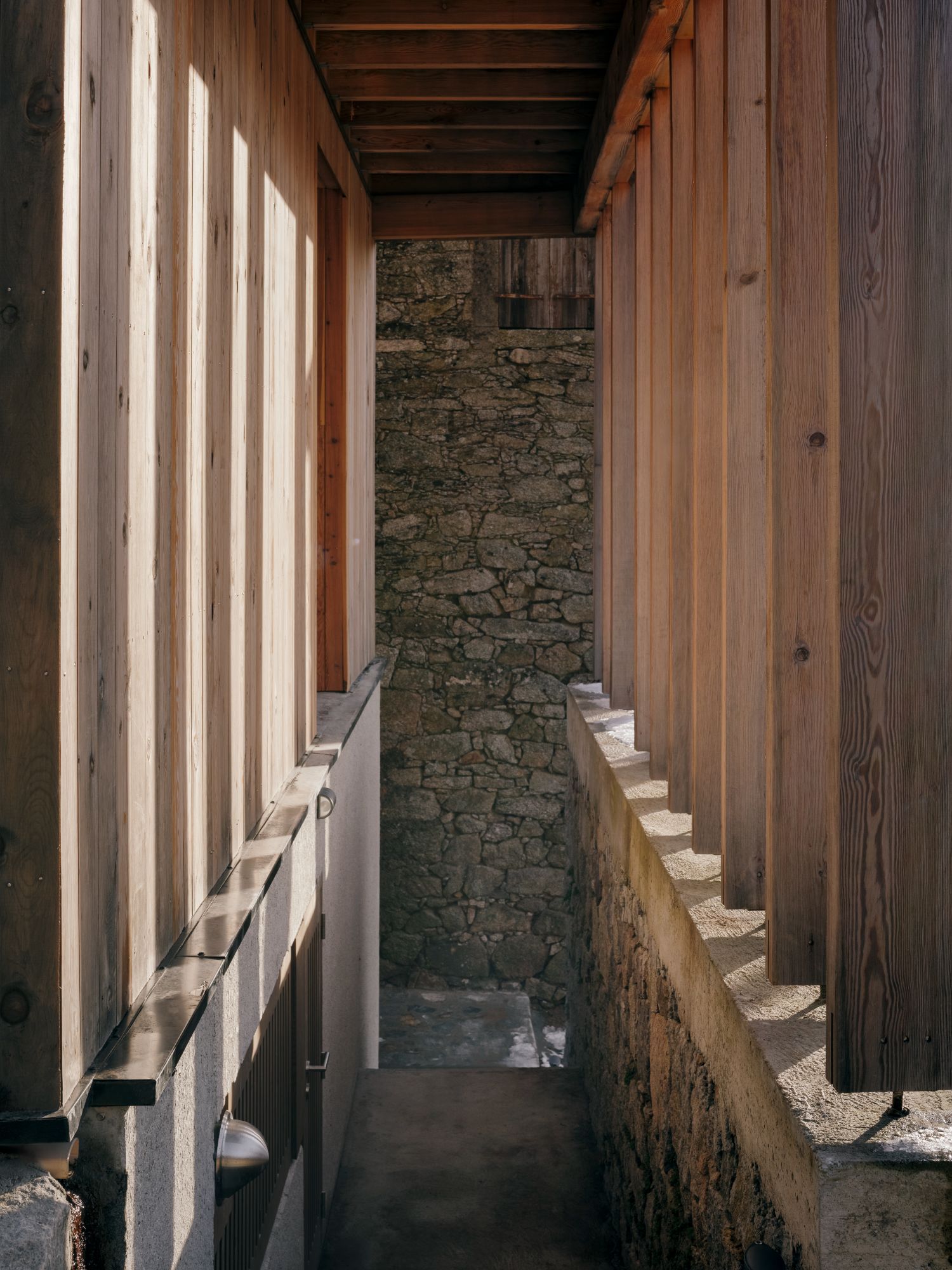 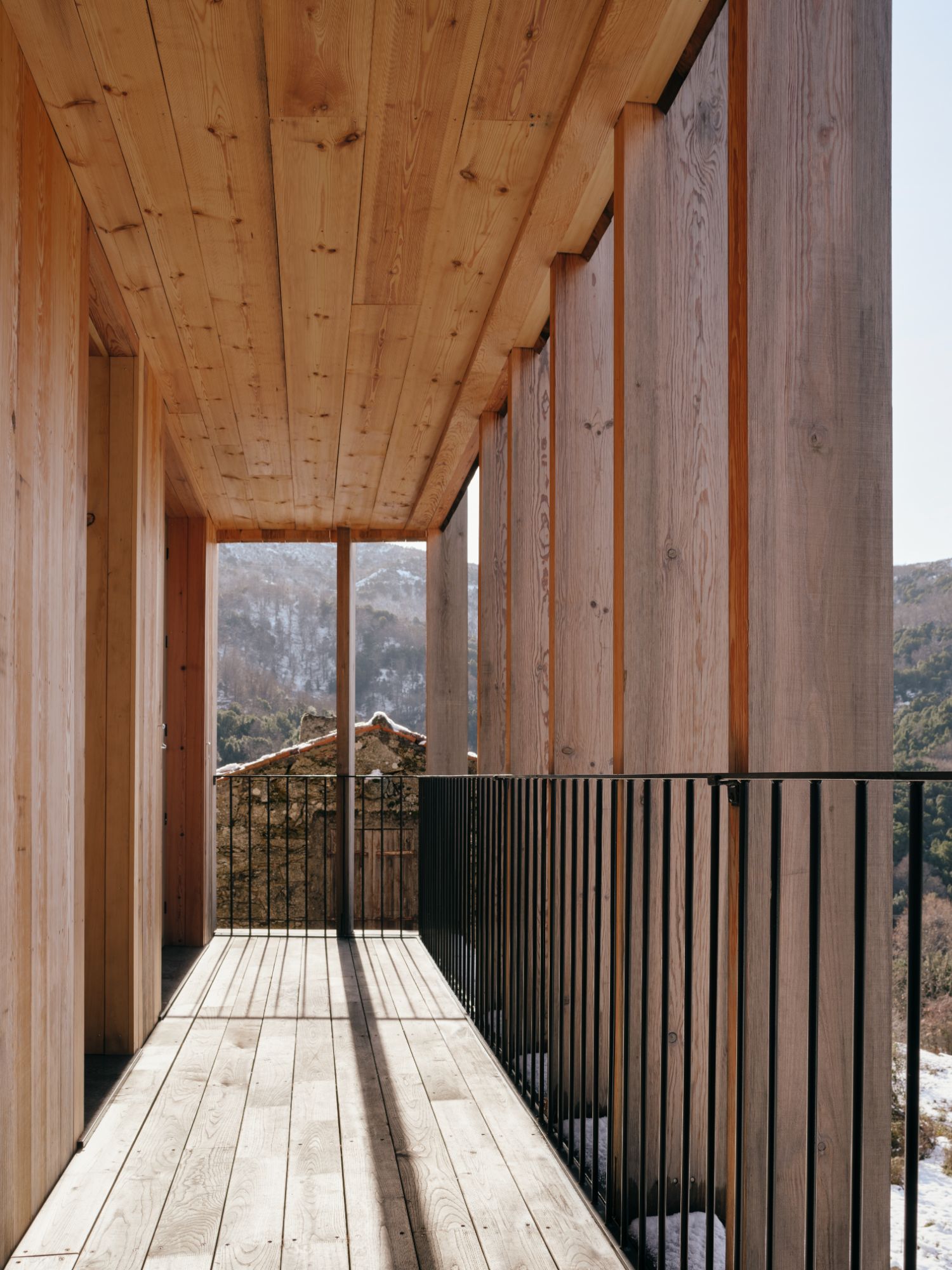 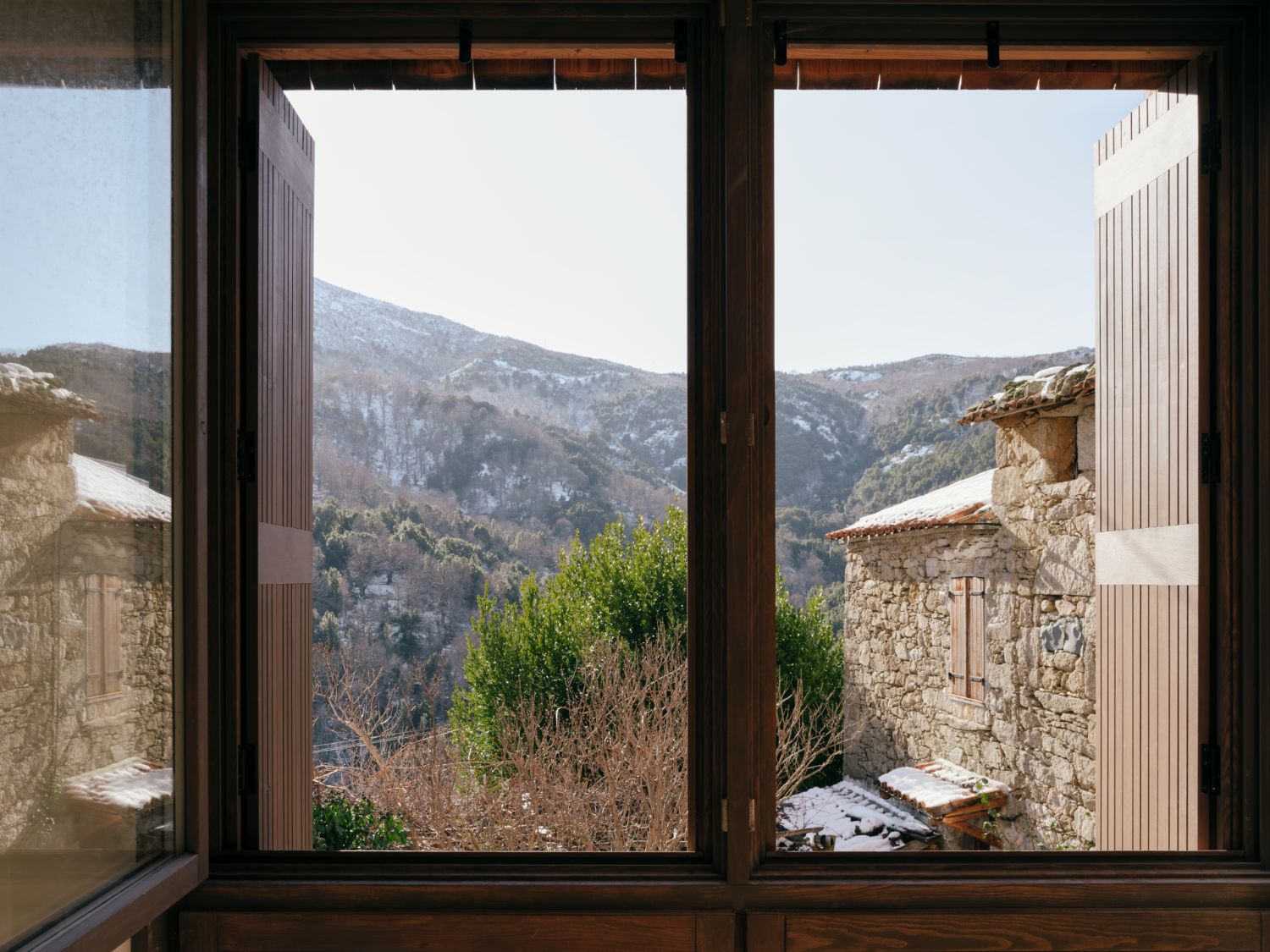 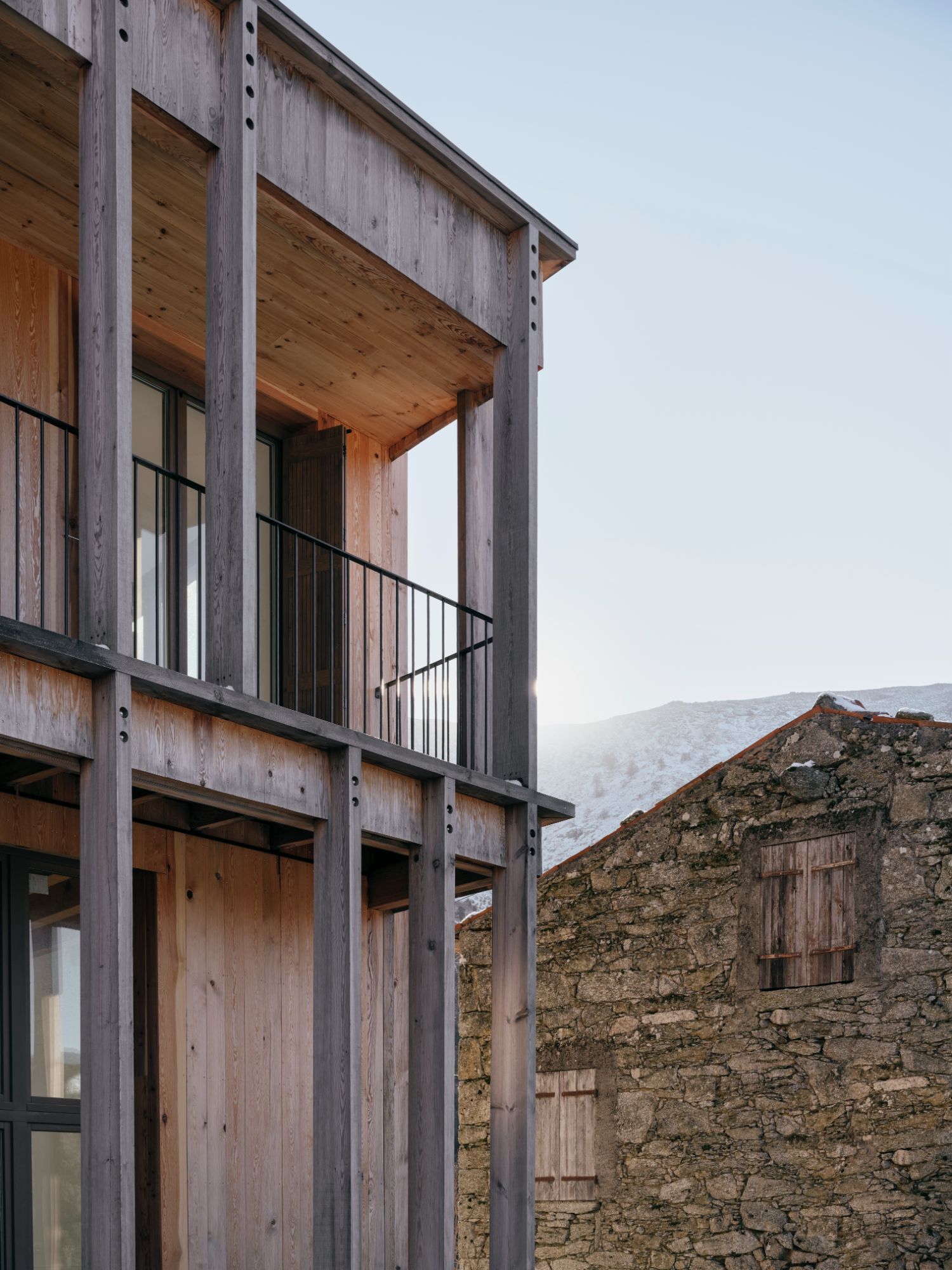 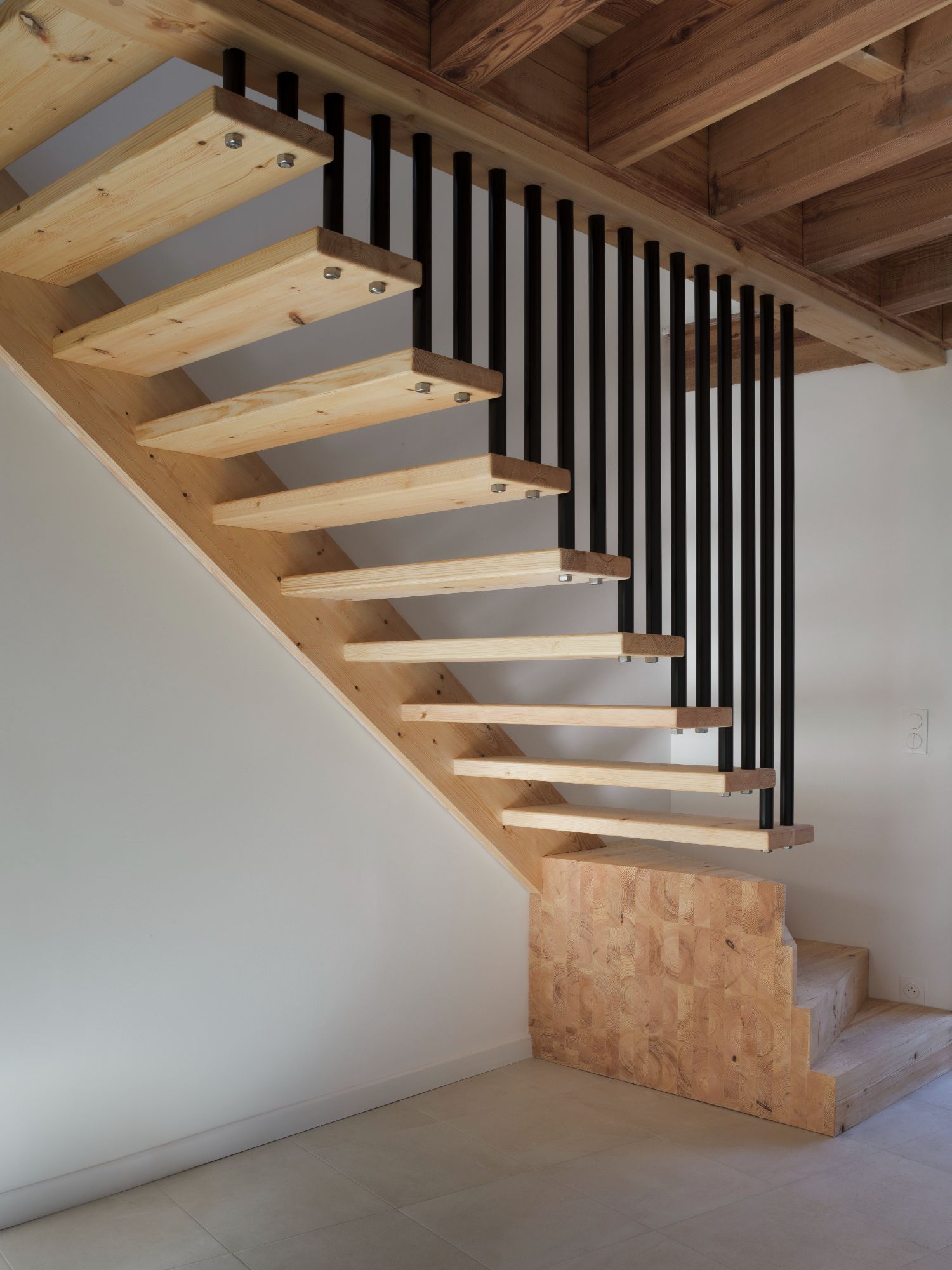 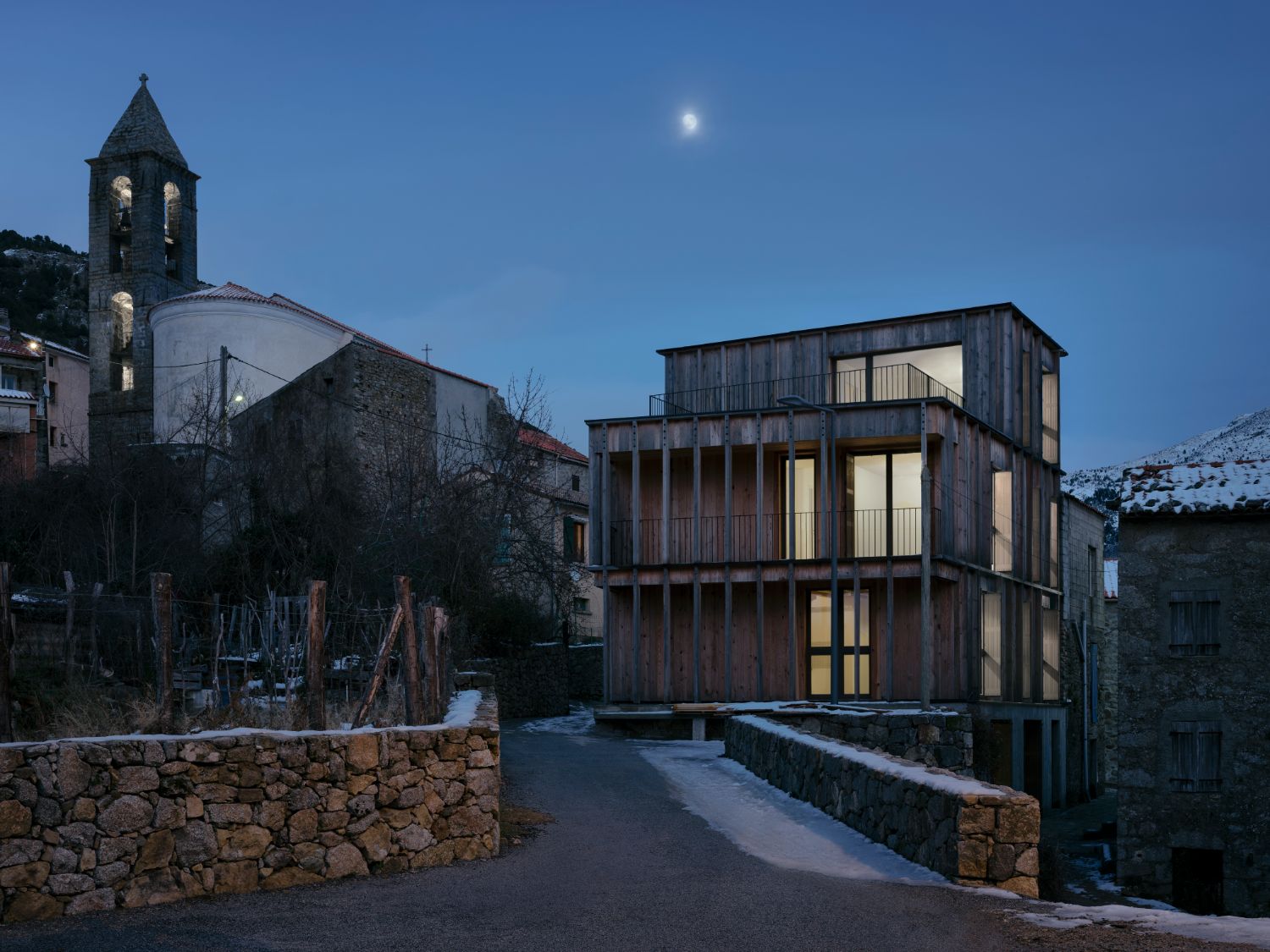 The project at hand is the rebuilding and reorganization of a ruin in the small village of Cristinacce, Corsica, to create three city-owned apartments.

Firstly, there is a social aspect to it as not-only it is city-owned, but the typologies are different to respond to the diversity of situations within Corsican villages.

Secondly, you find an environmental angle as it is a pressing matter for the whole island. This building is dimmed “low-carbon”, which makes it the first of its kind in Corsica.

Finally, the architectural aspect of the project of course, which lies in the form of a contemporary construction that fits the needs of modern life but in the midst of an old, traditional fabric, ever present in our small villages.

There is an act of resistance to the approach of building three social dwellings in a small village as it also aims at fighting against the depopulation inland. Offering high quality dwellings for a lower population with lower income is even greater.

The project Mairie de Cristinacce is characterized by a structure and a surface mainly wooden-made, thus really setting the building in our times. There was also the purpose of further integrating the modern volumes and shape, considering the material unity and sobriety of the façades. Furthermore, the architecture of the building allows us to create wide openings, necessary to meet the environmental standards as well as framing the views on the mountains afar.

Advocating the merits of a wood channel, industry, in Corsica could no longer be necessary as it is a material that you don’t only find in abundance across the island, but it also is a wood of the highest quality. Nevertheless, we still wanted to champion the local craftsmanship and point out the fact that despite wood being in plenty, difficulties in building with such a simple material can still arise because of the lack of drying units in Corsica. Indeed, the majority of the wood being used has to be dried and transformed, either on the mainland or in Italy.

The project Mairie de Cristinacce is looking into providing immediate answers to the issues at hand. In order to do this, the building methods we have looked into had to be precise and to integrate the fact that the wood we would use would not reach the required 13% humidity rate, as it is normally the case in all traditional wooden structures. Doing so, we avoided shipping the wood on the mainland, lowering the carbon footprint of the project at the same time.

Hence, in being very demanding with regard to the whole process, we wanted to ensure that the project would be exemplary in all aspects. This project is socially and environmentally sound, promoting endemic resources (the wood used in Laricio pine tree) and it participates in repopulating the inland parts of Corsica.

Link to the project on the architect / engineer website: https://www.orma-architettura.com/fr/projets/logements-communaux