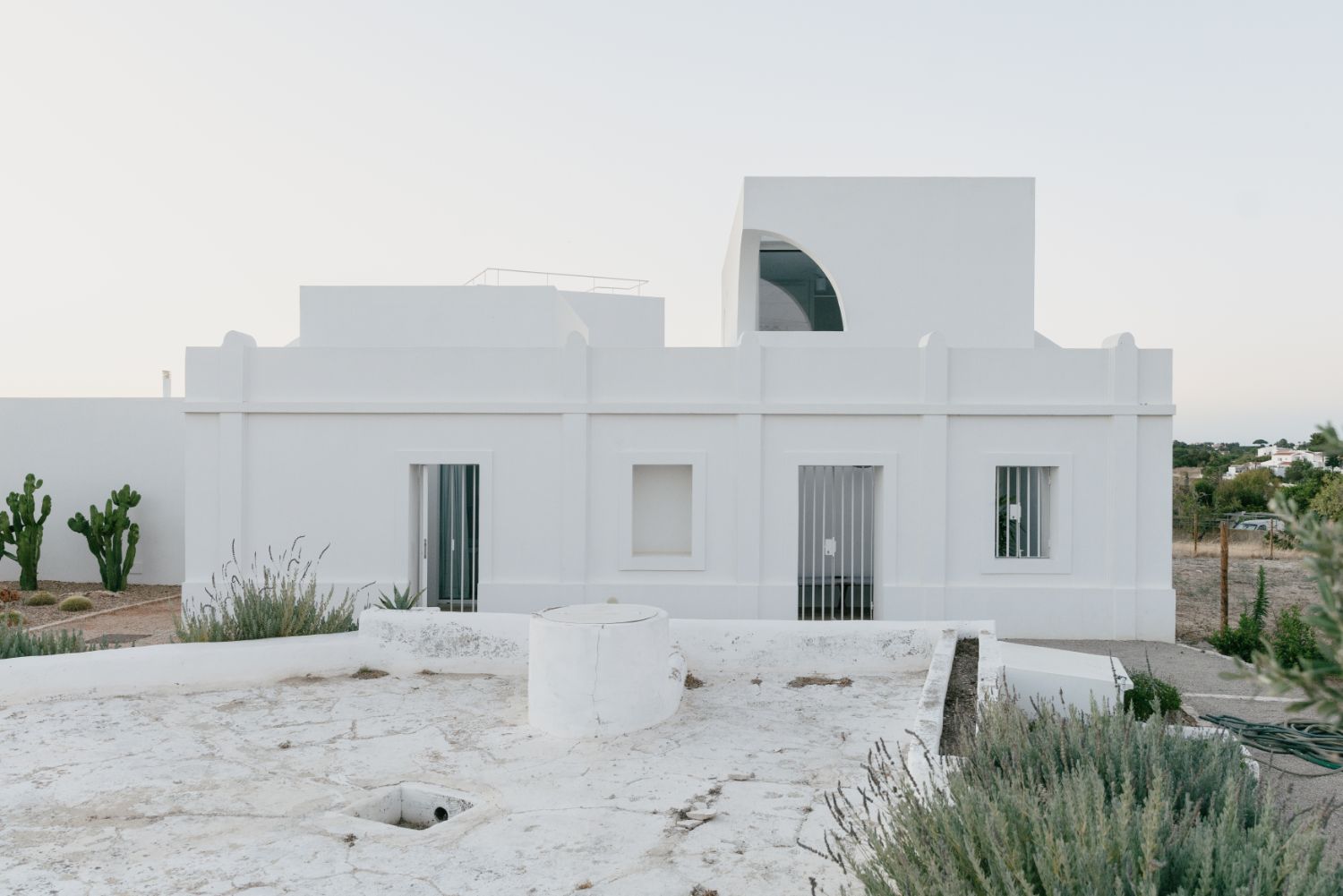 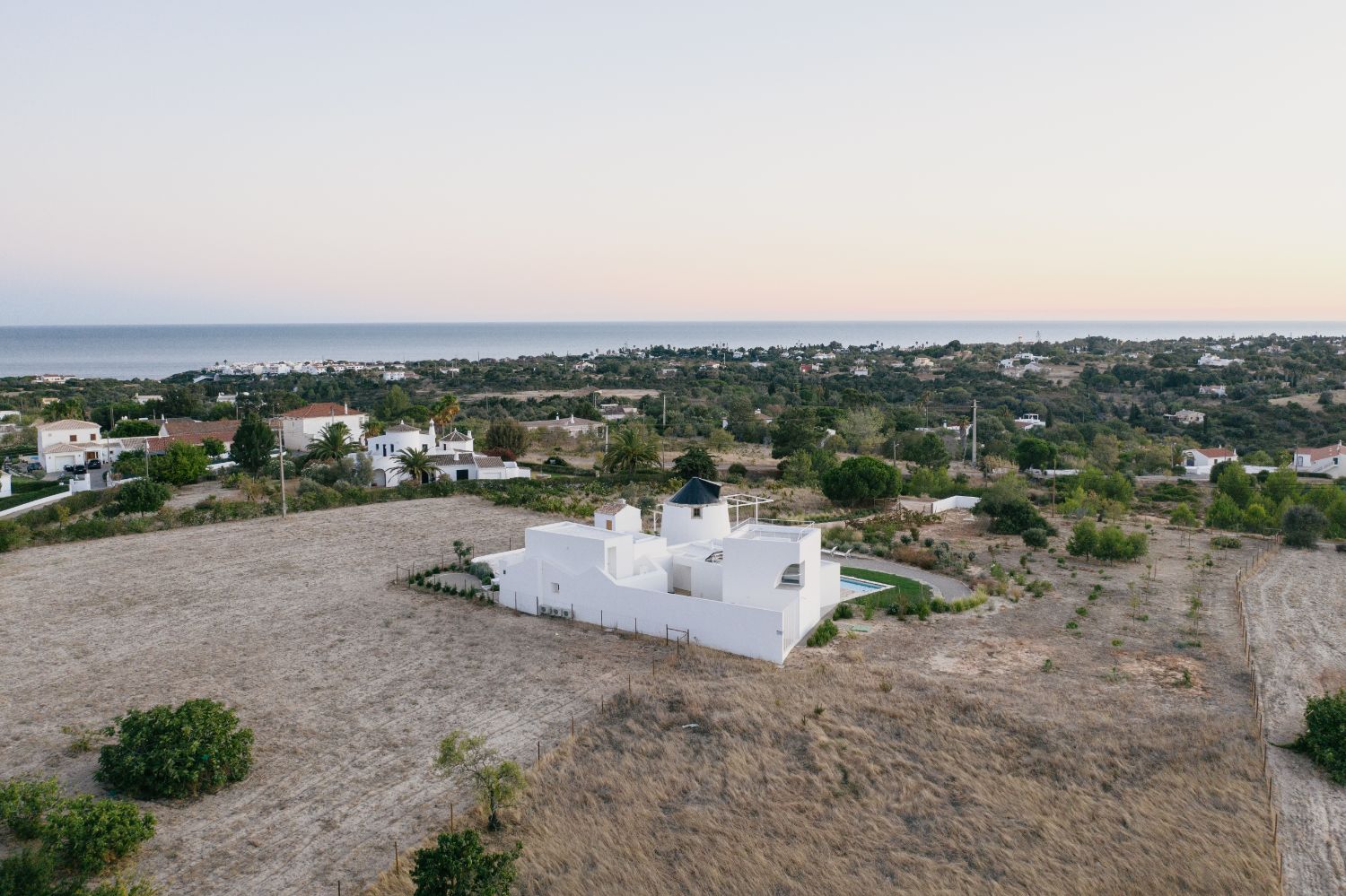 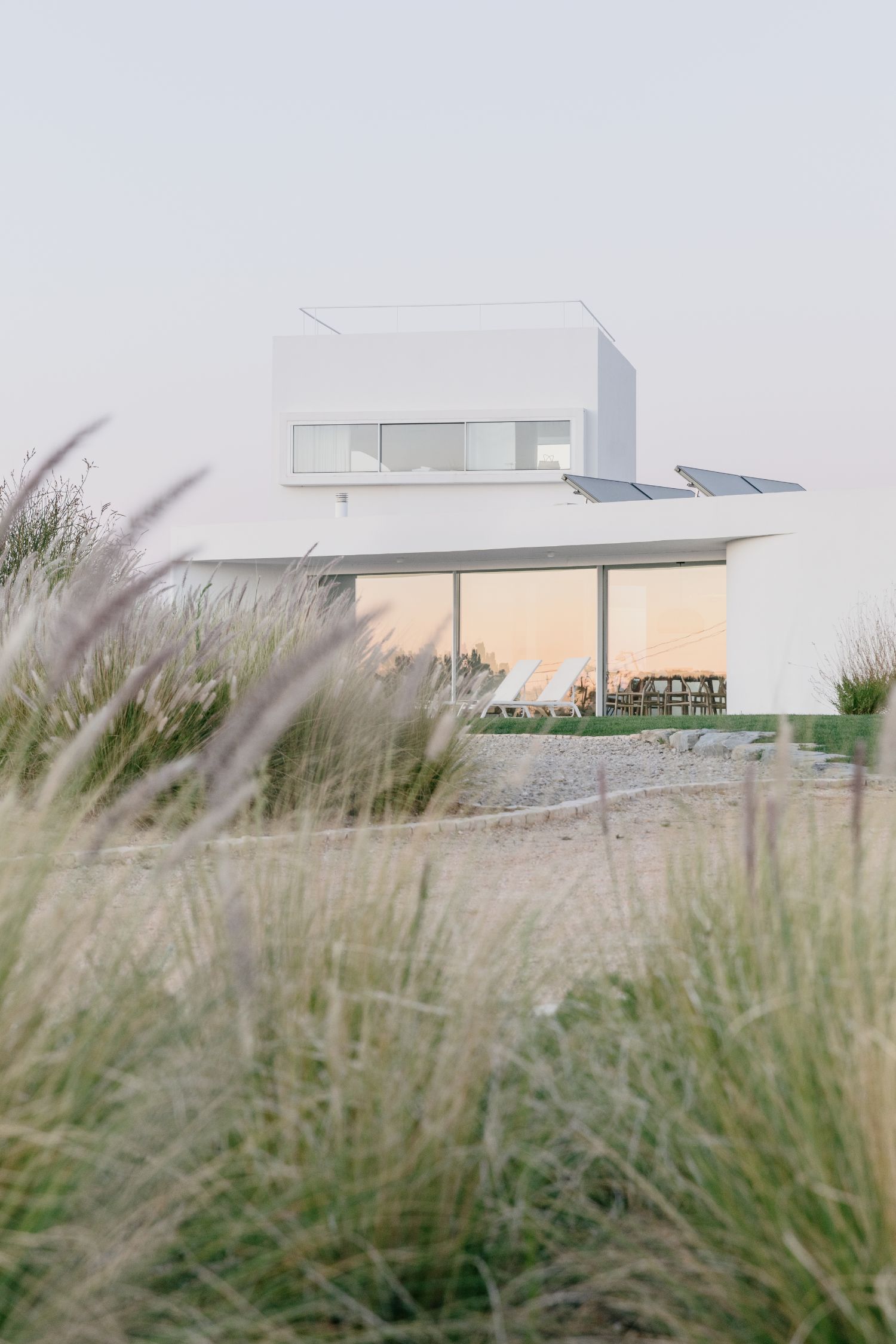 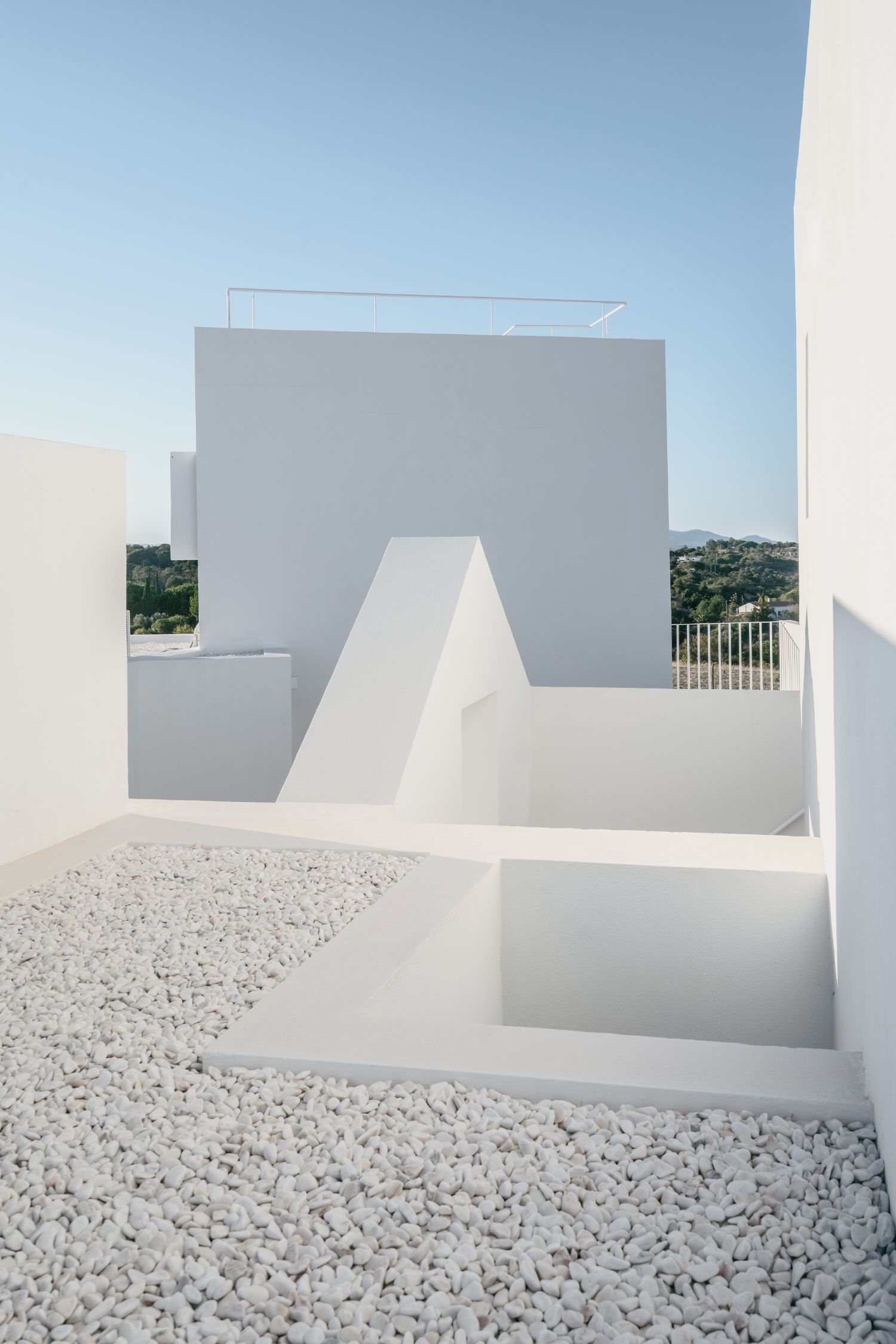 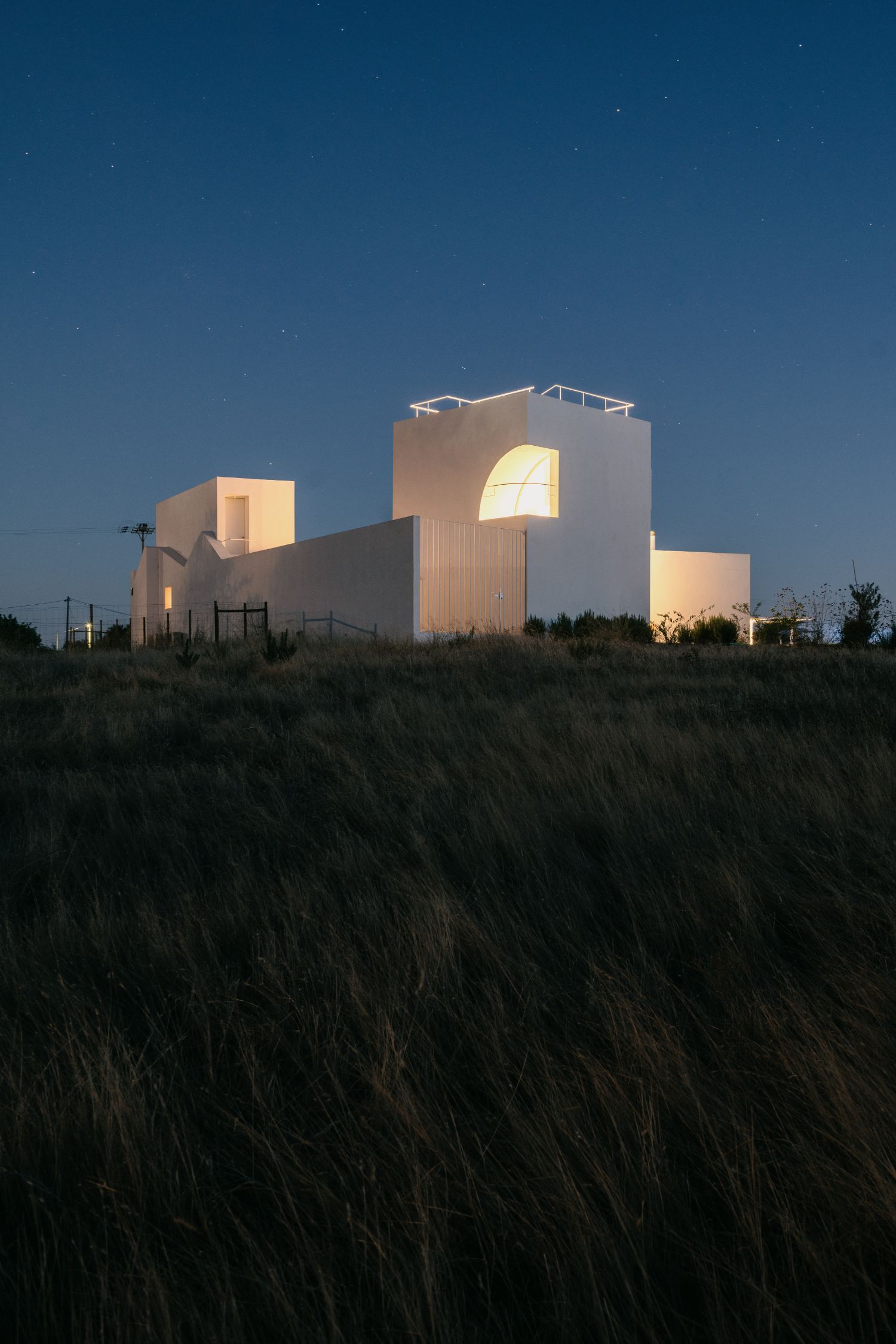 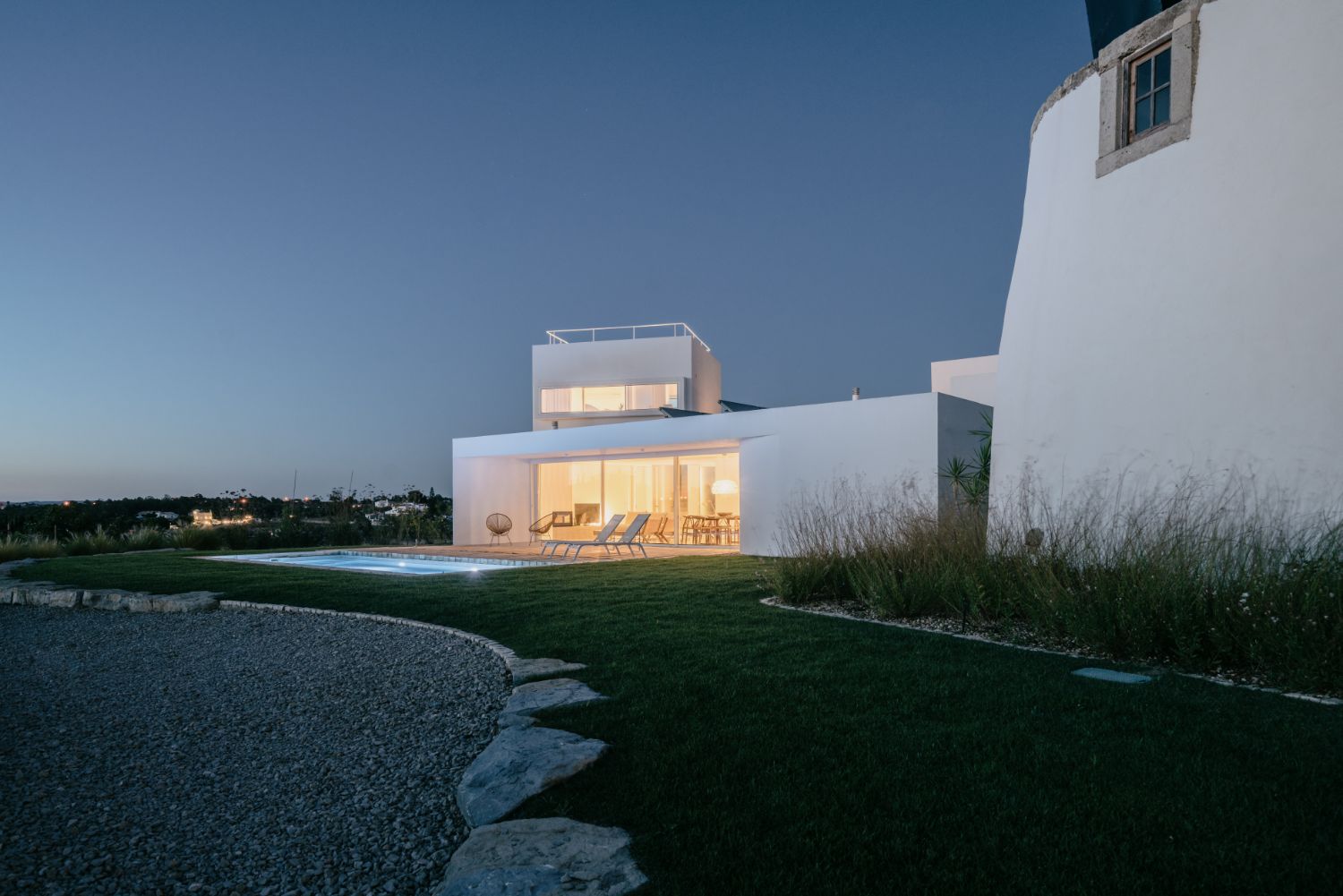 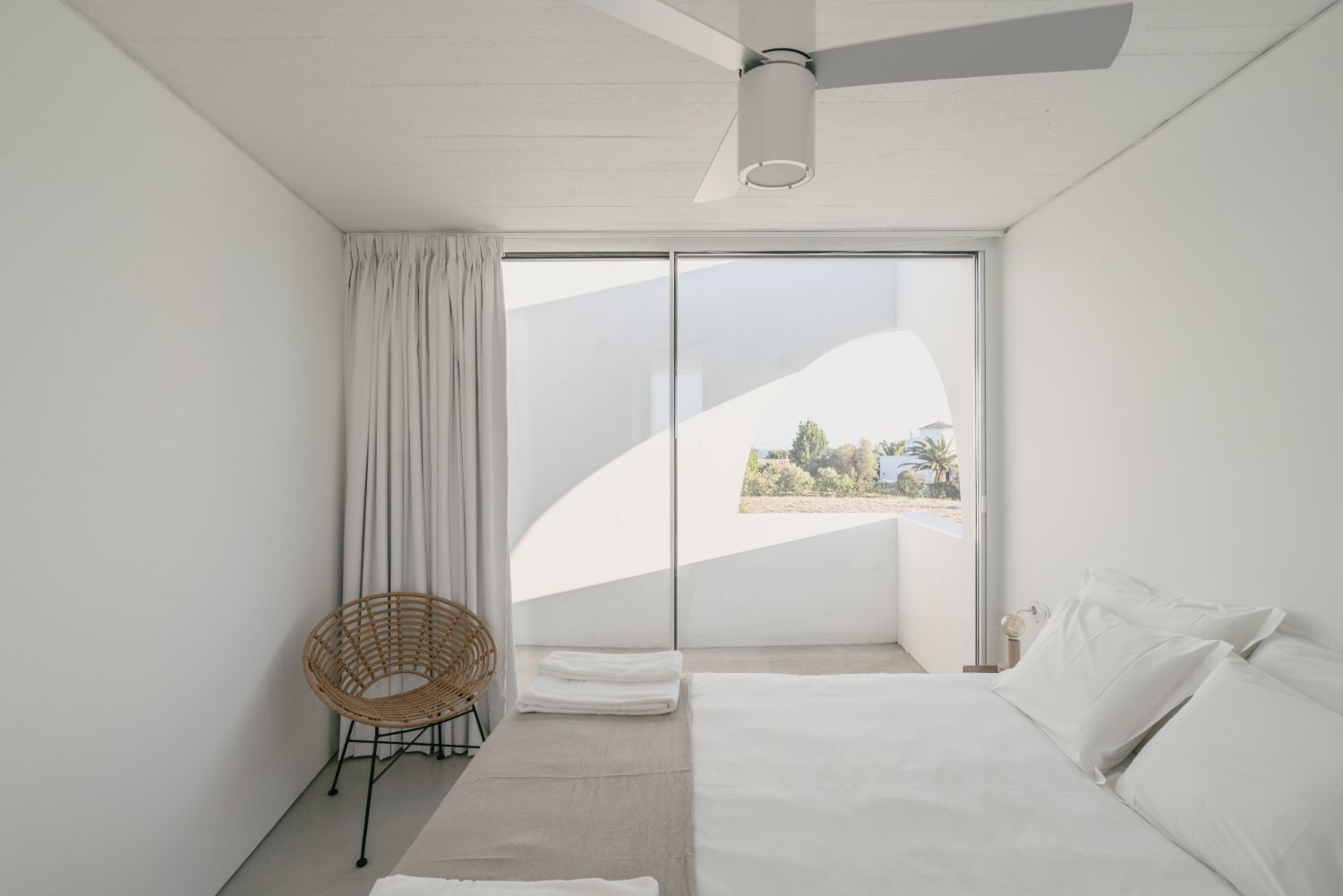 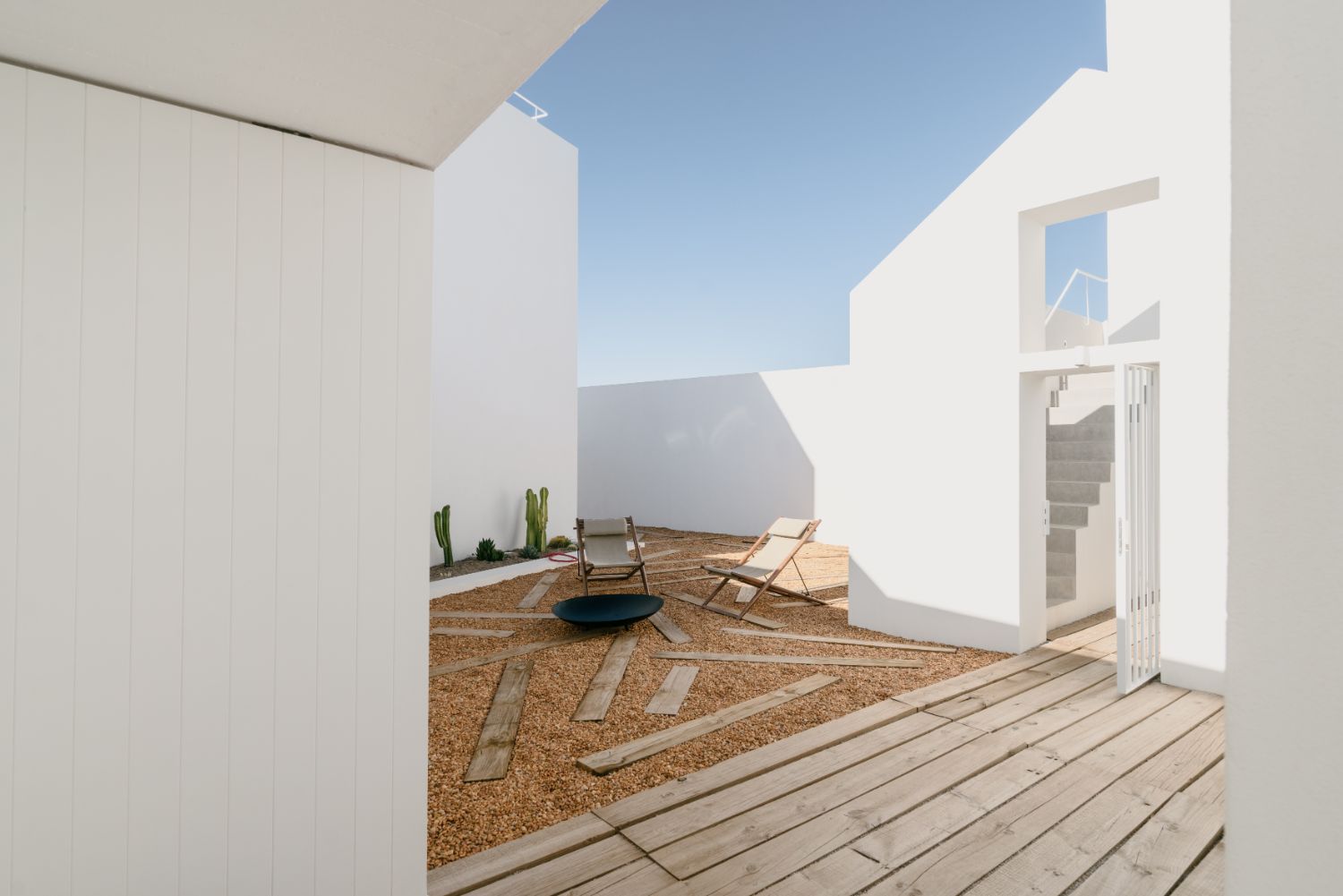 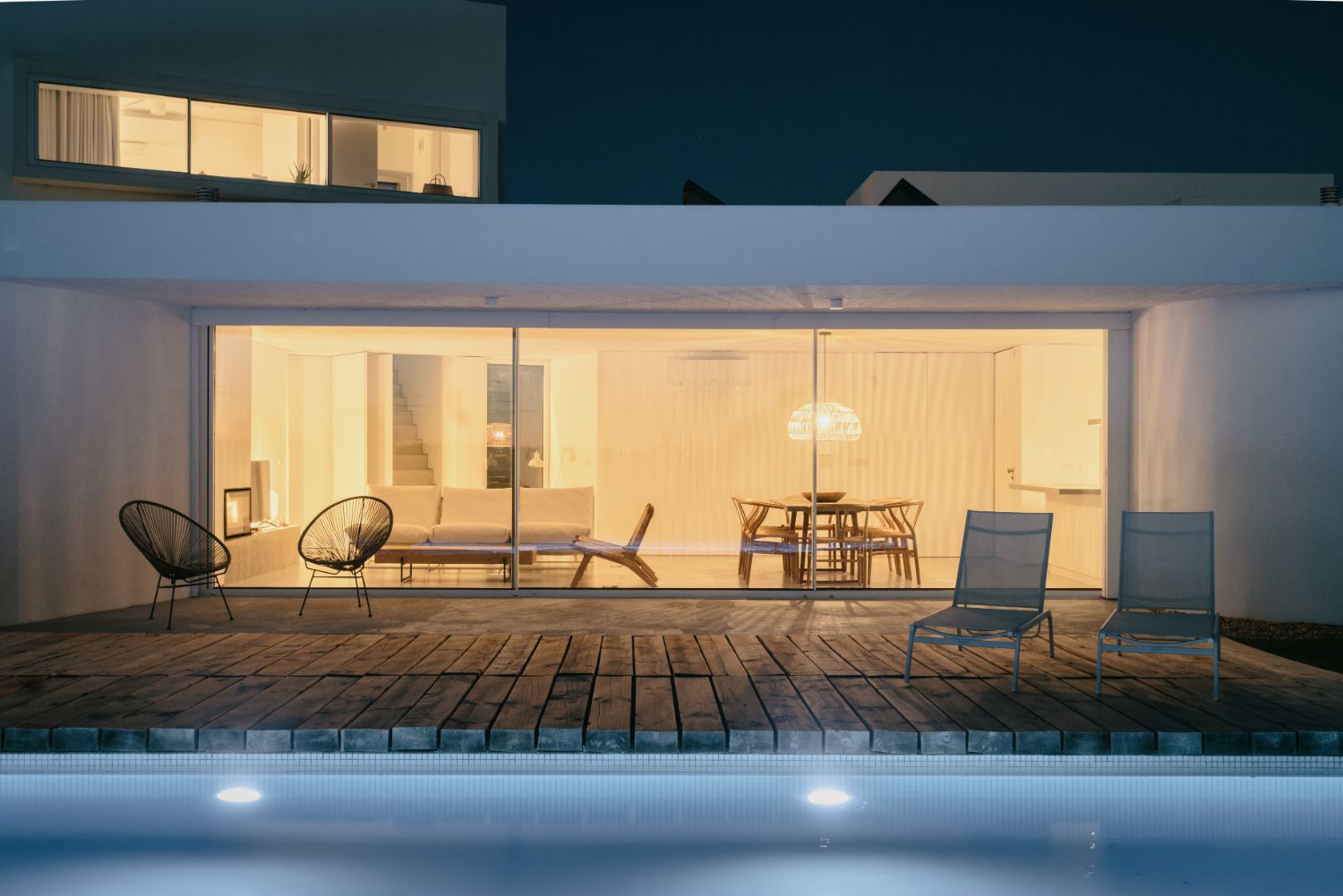 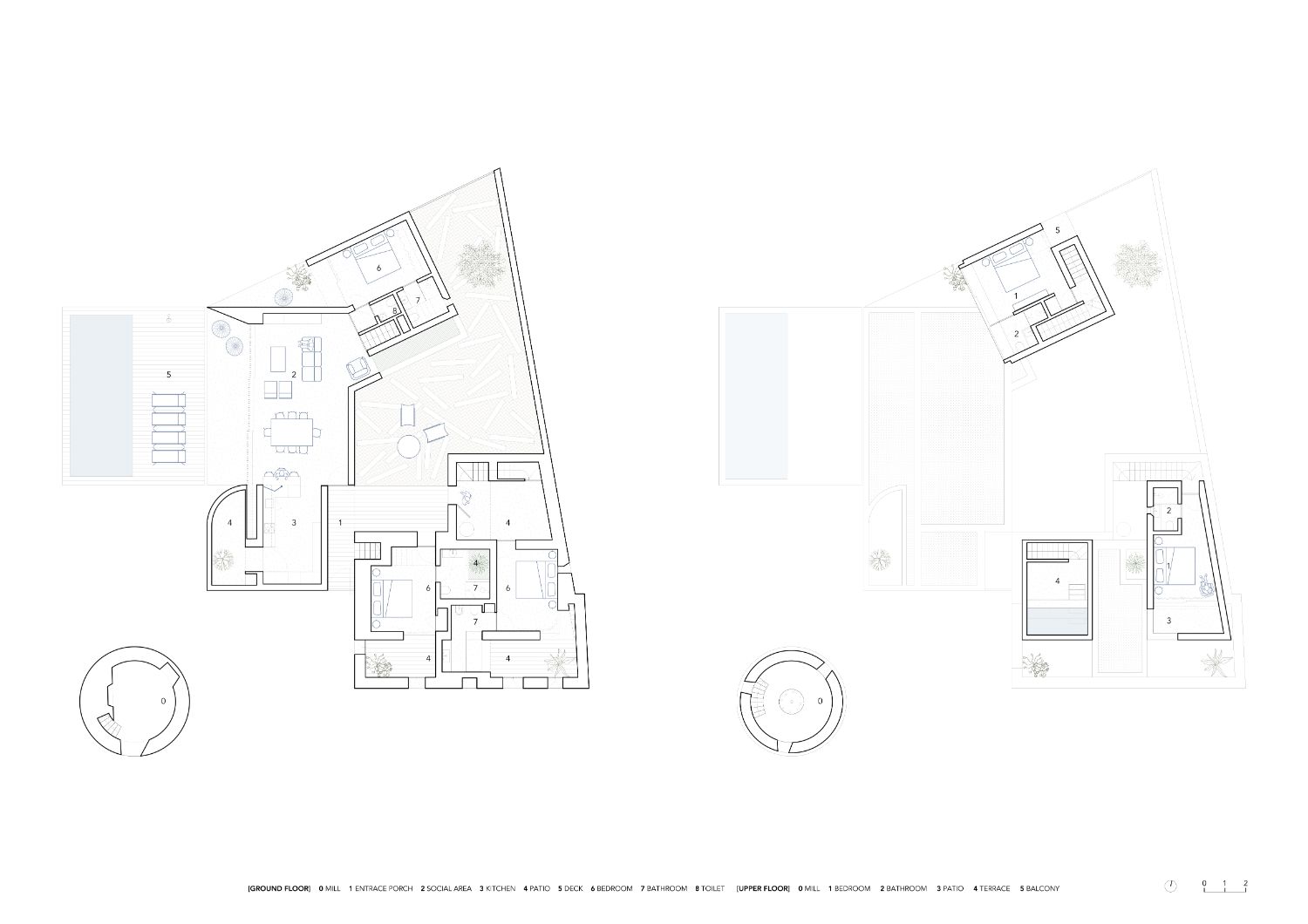 Located on a high ground in Vale d’el Rei, Lagoa, Casa Cabrita Moleiro aims to turn an old agricultural property into a residential space, where its flexibility to accommodate a wide variety of usage and sharing is a major Project condition.

On this place, dominated by the presence of an existing wind well, once used for willing wheat, other pre-existences like the old house of the miller, a threshing floor area or even a small corral reinforce, all together, the eminent rural character of the site and its built elements.

The project development, pushed by the need of rehabilitate the old structures and readapt them to a new scope of usage and function, aimed to incorporate some of those elements in a new spatial and experiential dynamic, allowing them to belong to a new place and, as a consequence, to its own new timeline.

Old walls were converted into a new limit that contains and frames part of the intervention. From this new limit, emerges the articulation of new built volumes and, in result of their disposition, empty voids are generated, emphasizing the relations between indoor and outdoor. Simultaneously, they contribute for a better perception of the space that goes through different stages and levels of exposure.

This progressive building process of the space, that distinguishes different levels of intimacy, is equally explored from a section-profile point of view, where the various heights of the volumes generates distinct confrontations with the surroundings, expanding our field of vision until the sea and its infiniteness or, on the contrary, framing it in the contained character of a courtyard.

The distribution of the spatial program considers the distinction between social and private areas, linking them to different and specific volumes.

The social area, where the kitchen, living room and swimming pool (with associated outdoor-lounge area) are located, is developed in a one floor volume, whose centrality reinforces the intention of establishing a core that gathers a conviviality and sharing atmosphere, around which the bedroom volumes are shaped.

In a first volume, developed from the limits of the old house, three suites with independent access are settled, distributed by two different floors. Each bedroom disposes of an outdoor courtyard of exclusive usage and, besides that, there’s a terrace on the volume’s rooftop with a shared jacuzzi, which takes total advantage of the privileged view over the sea.

The second volume – the two floored tower that contains other two suites – emerges in continuity of the social area, standing out due to its volumetry, just like the other bedrooms core, that privileges the overhead view towards the sea.

This exercise of exploring the physical surroundings of the site is also reinforced by the introduction of terraces and viewpoints, which are traditional features on rooftops around this area of Portugal. The so called “açoteia algarvia” is evoked and incorporated into the project.

Finally, the connection between the perimeter of the old house and the new built area functions as a distribution axis to the different spaces of the house. This distributive axis allows Casa Cabrita Moleiro to be flexible on its own use: a house that works as a unit, with five bedrooms or, on the other perspective, a house with two bedrooms, complemented with an independent wing which has three more bedrooms.

Link to the project on the architect / engineer website: http://www.atelierdata.com/pt-built.html?mainMenuItemToSlide=2#