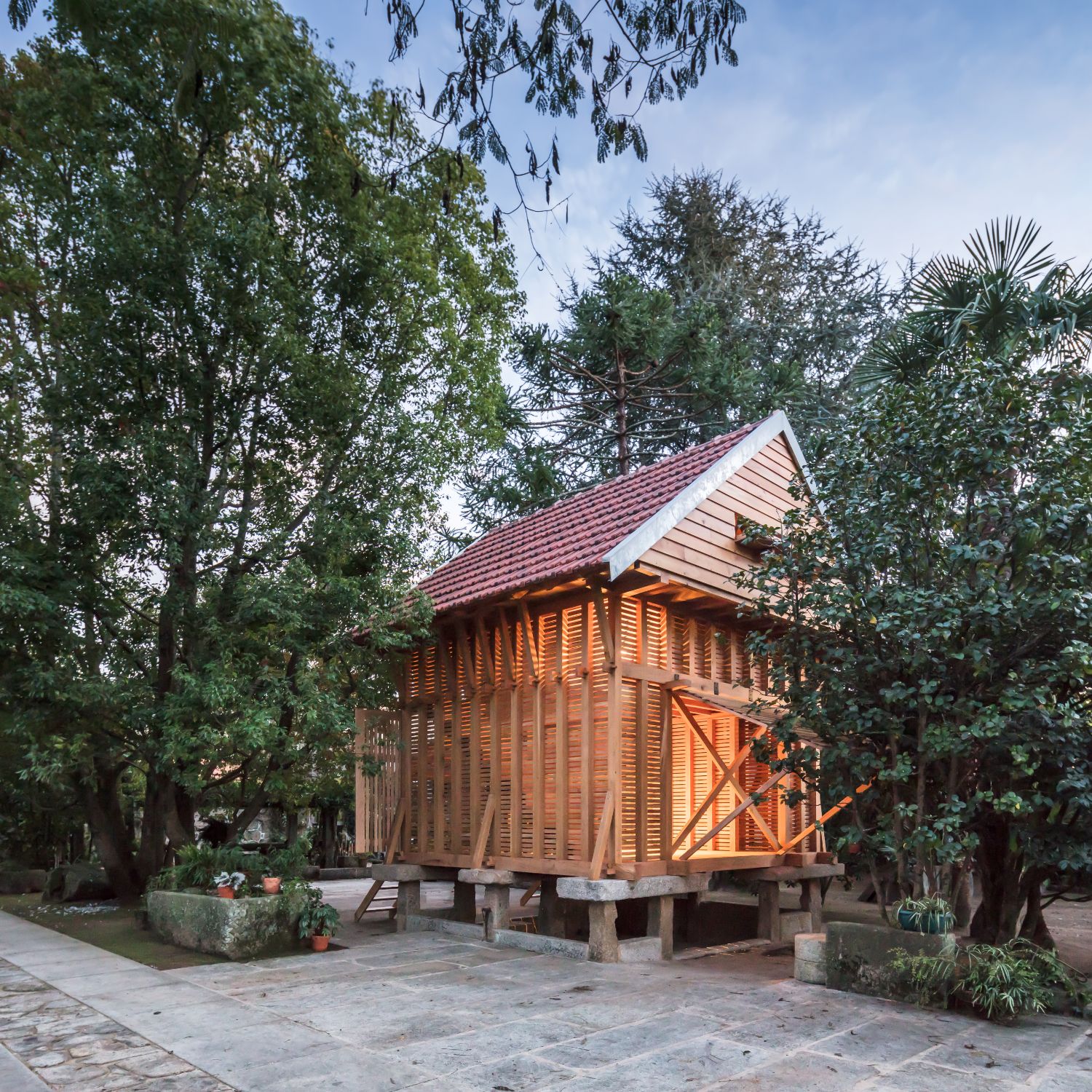 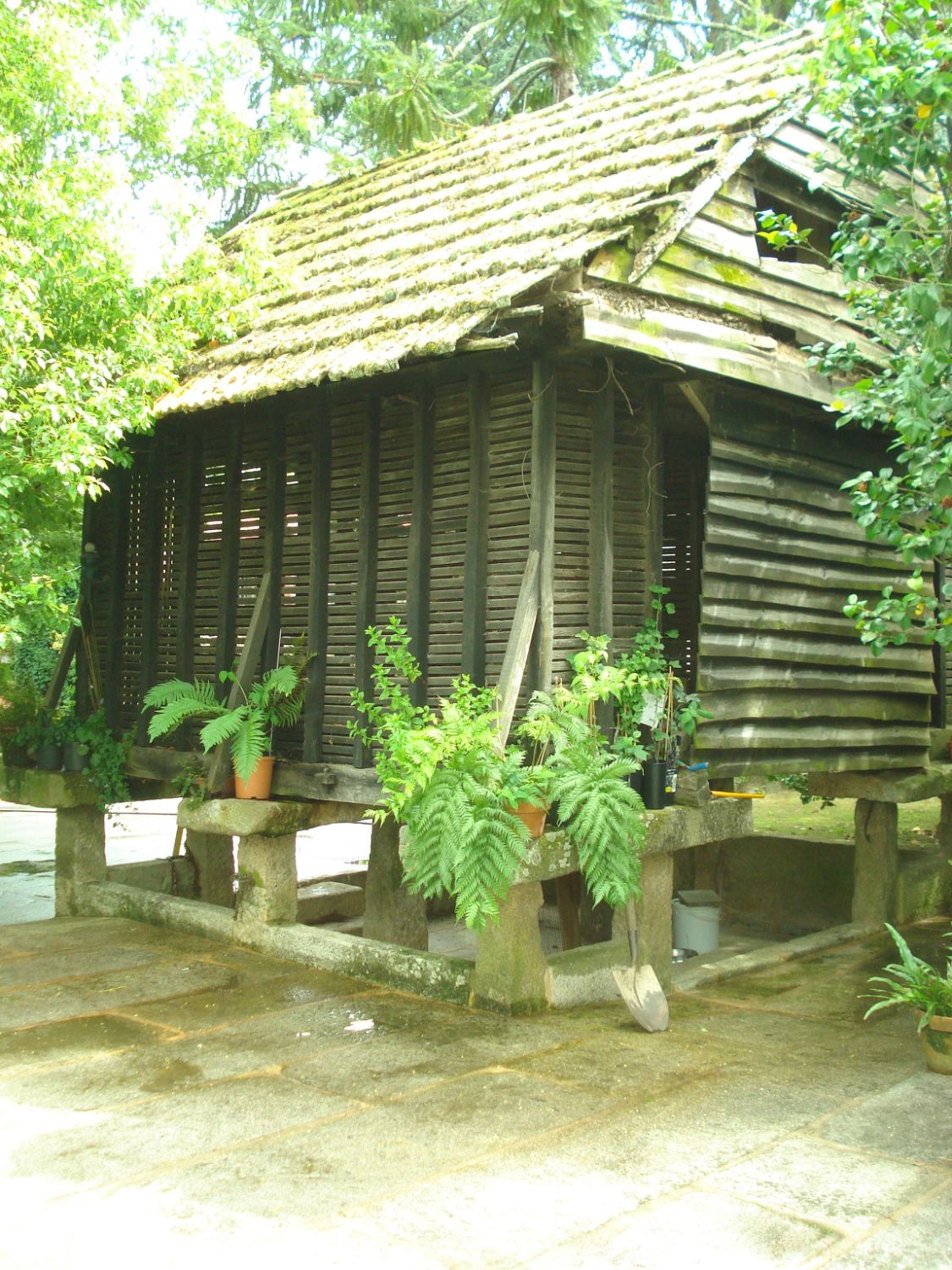 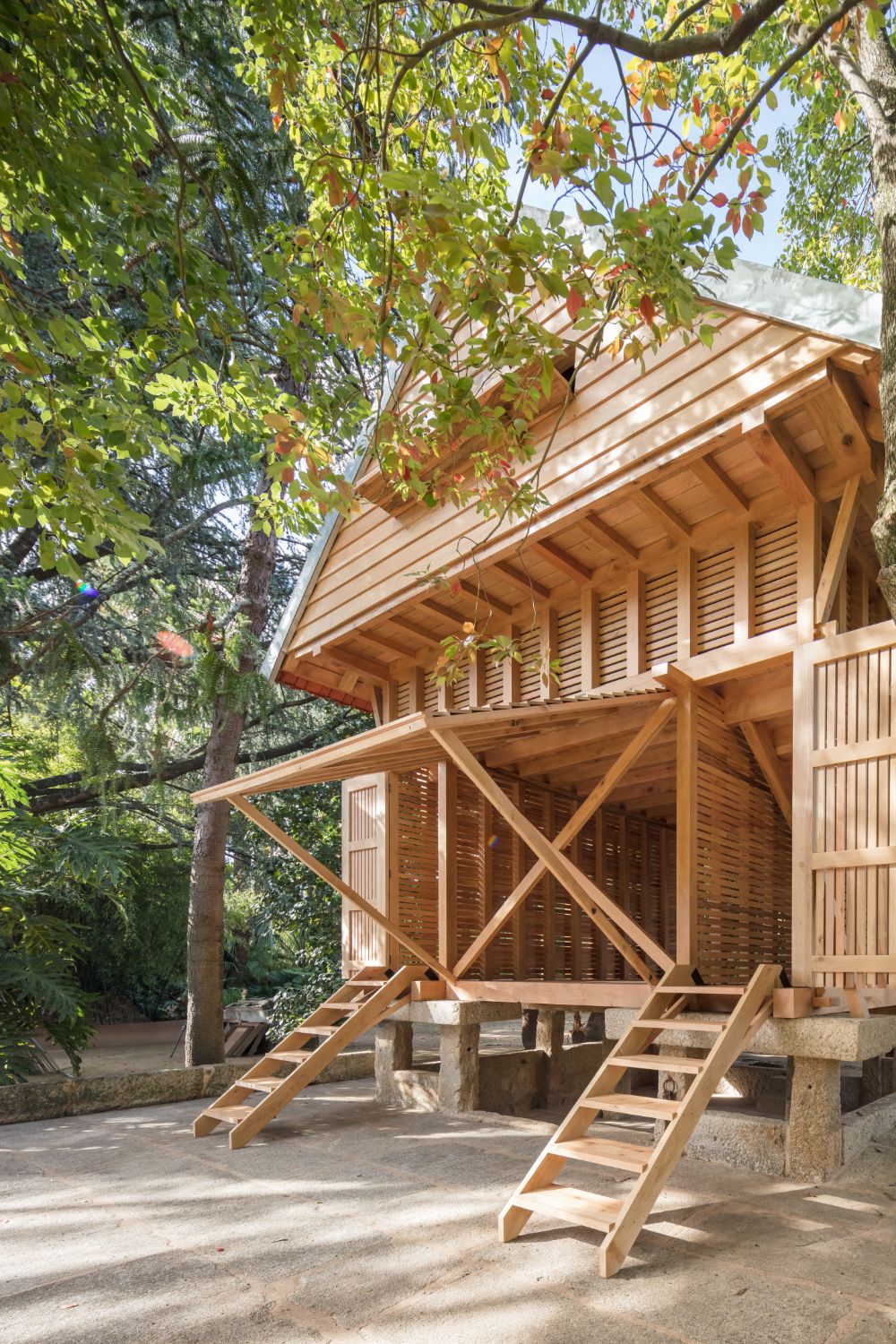 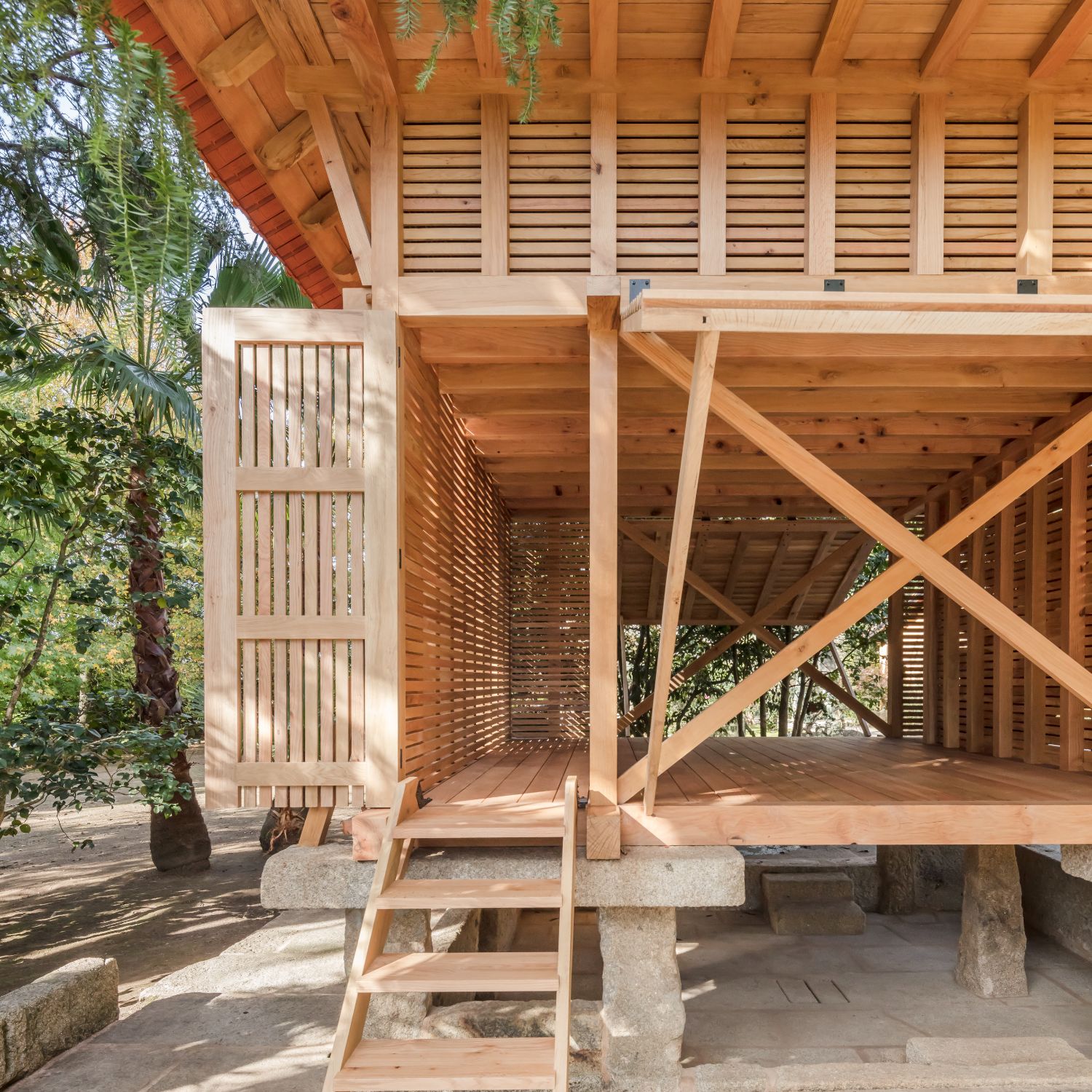 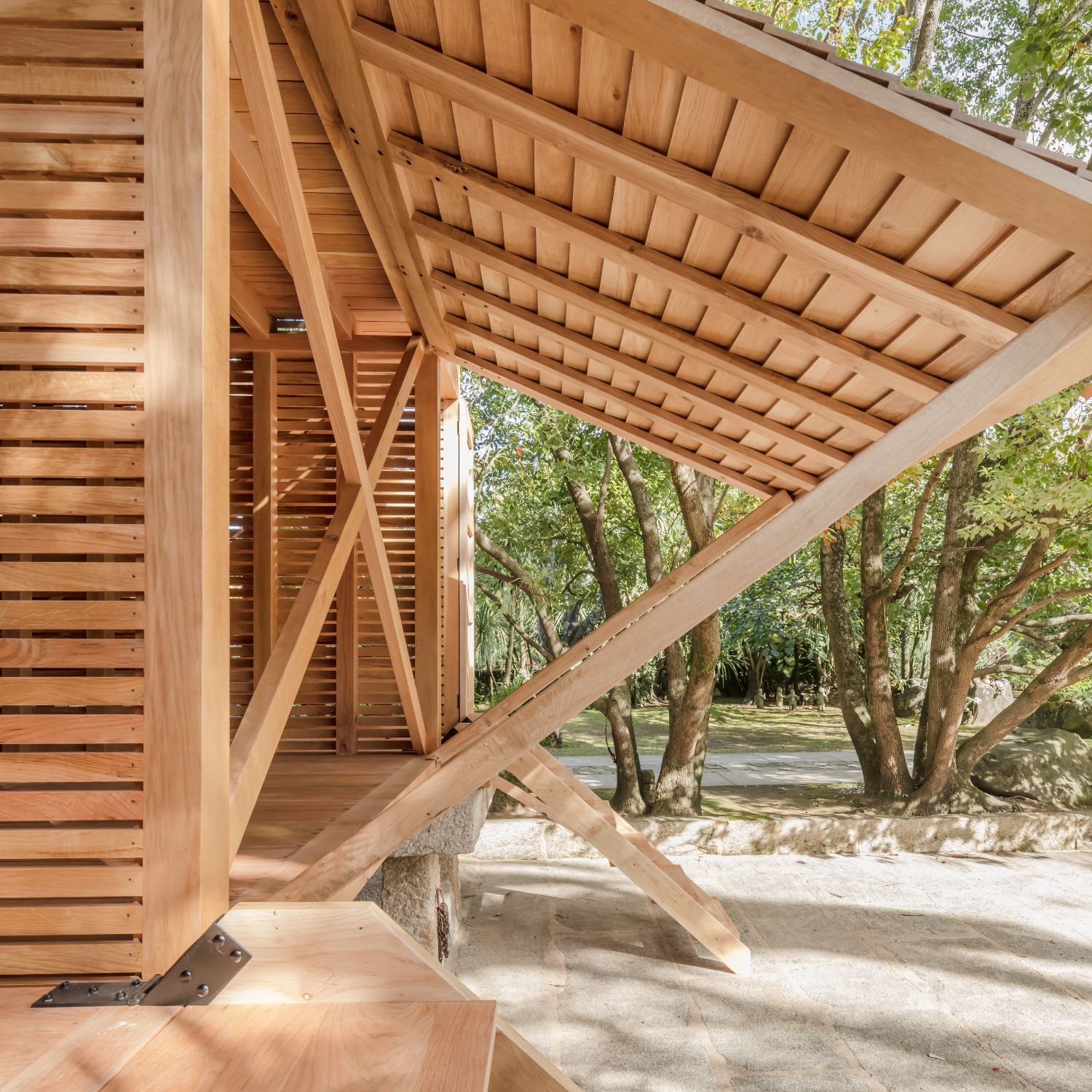 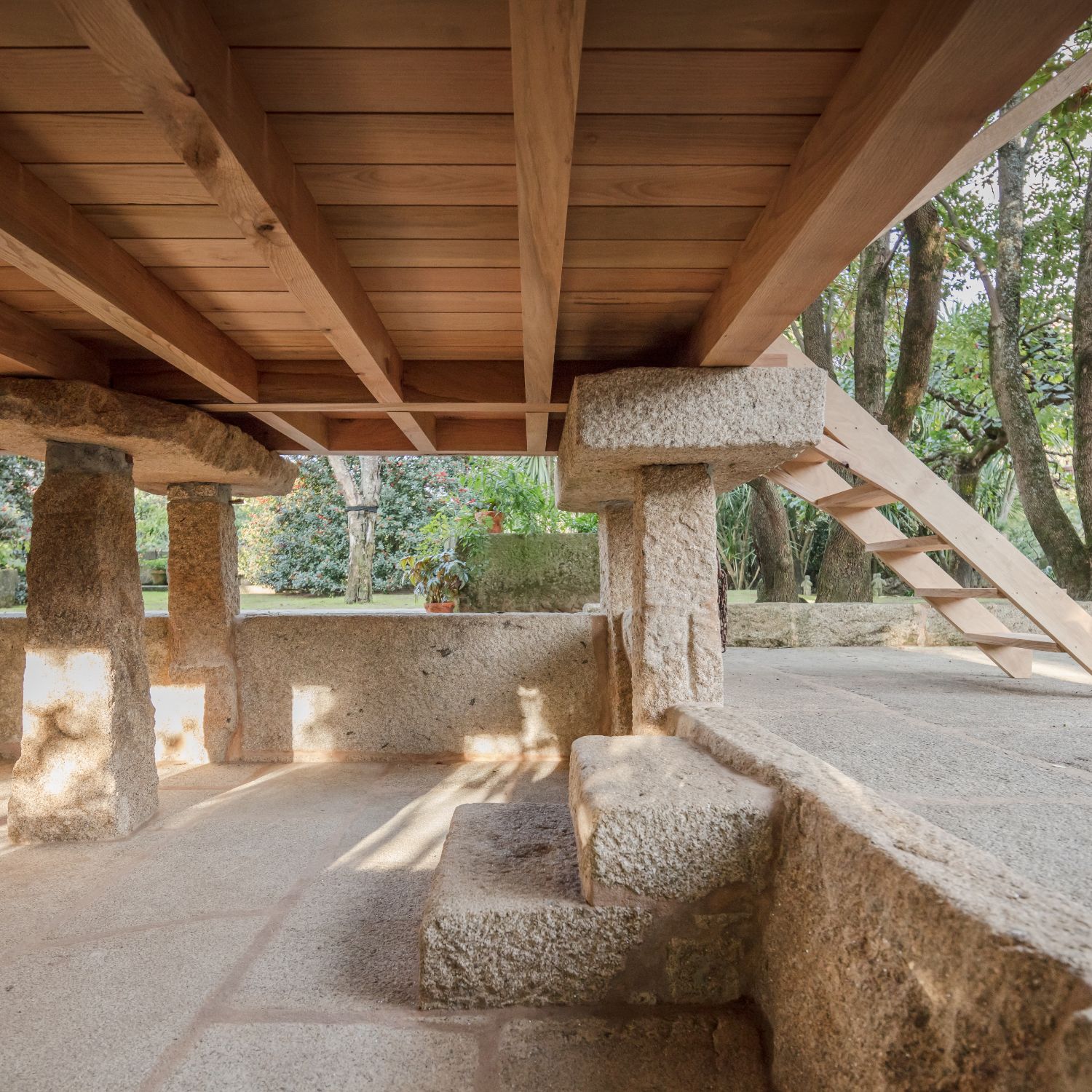 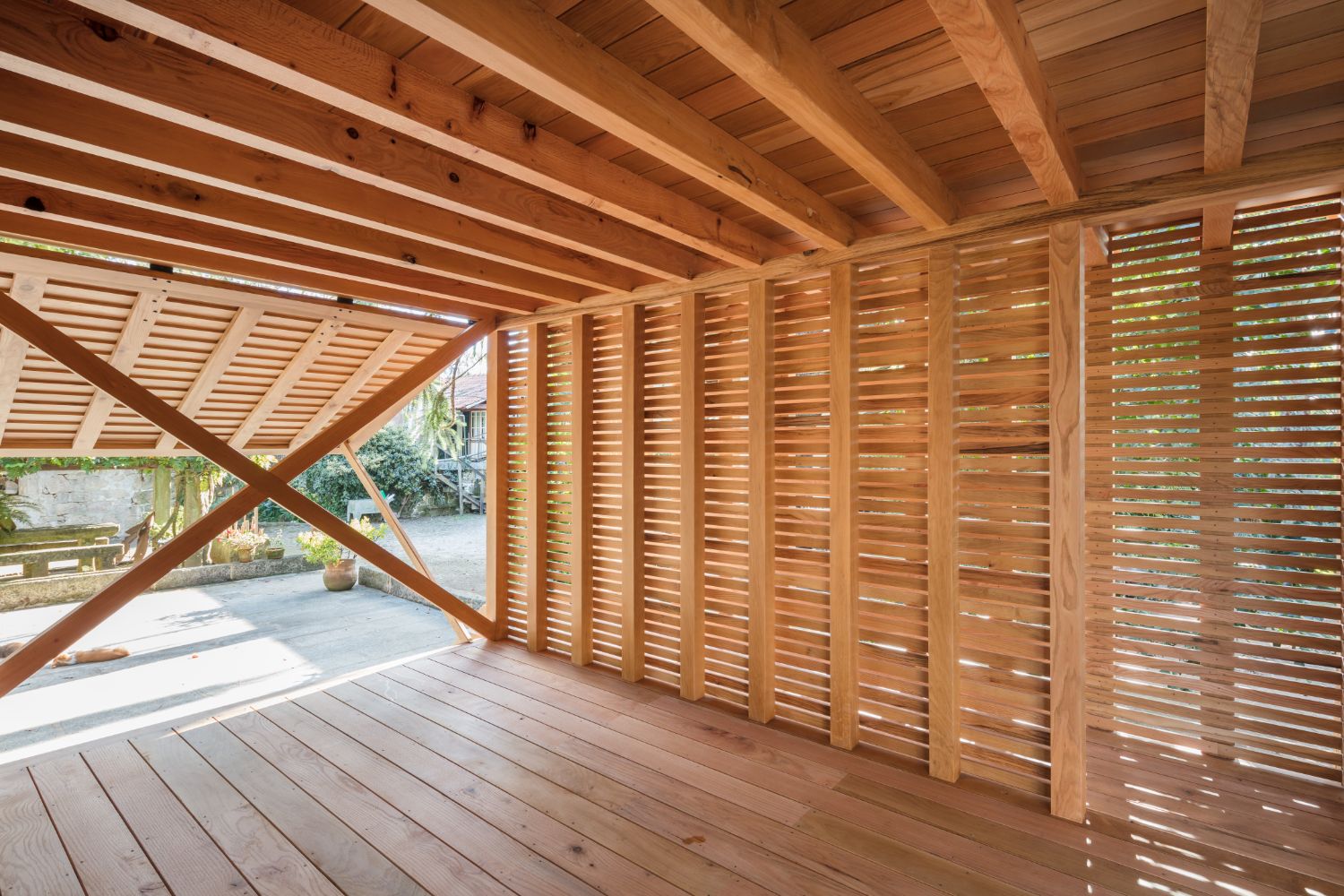 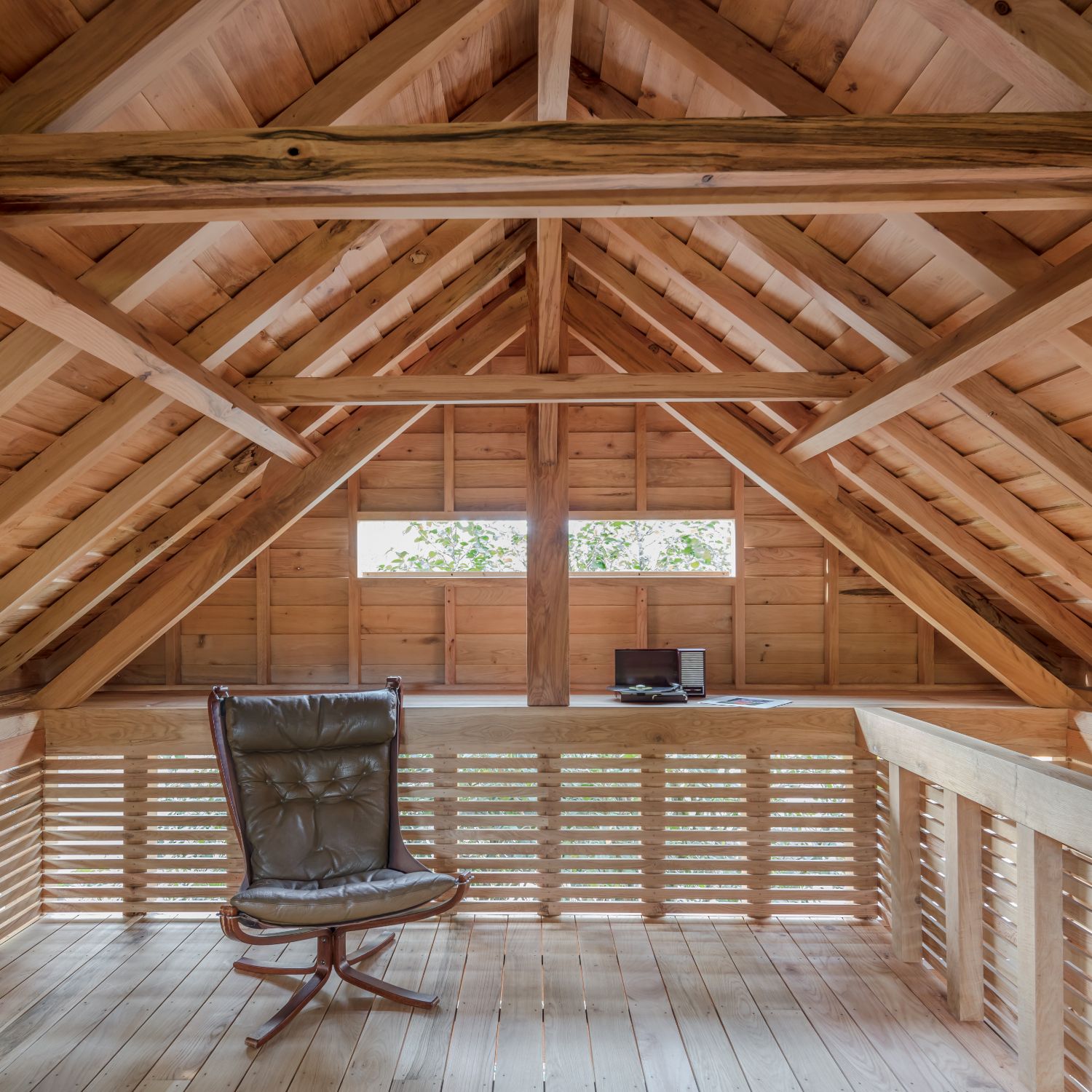 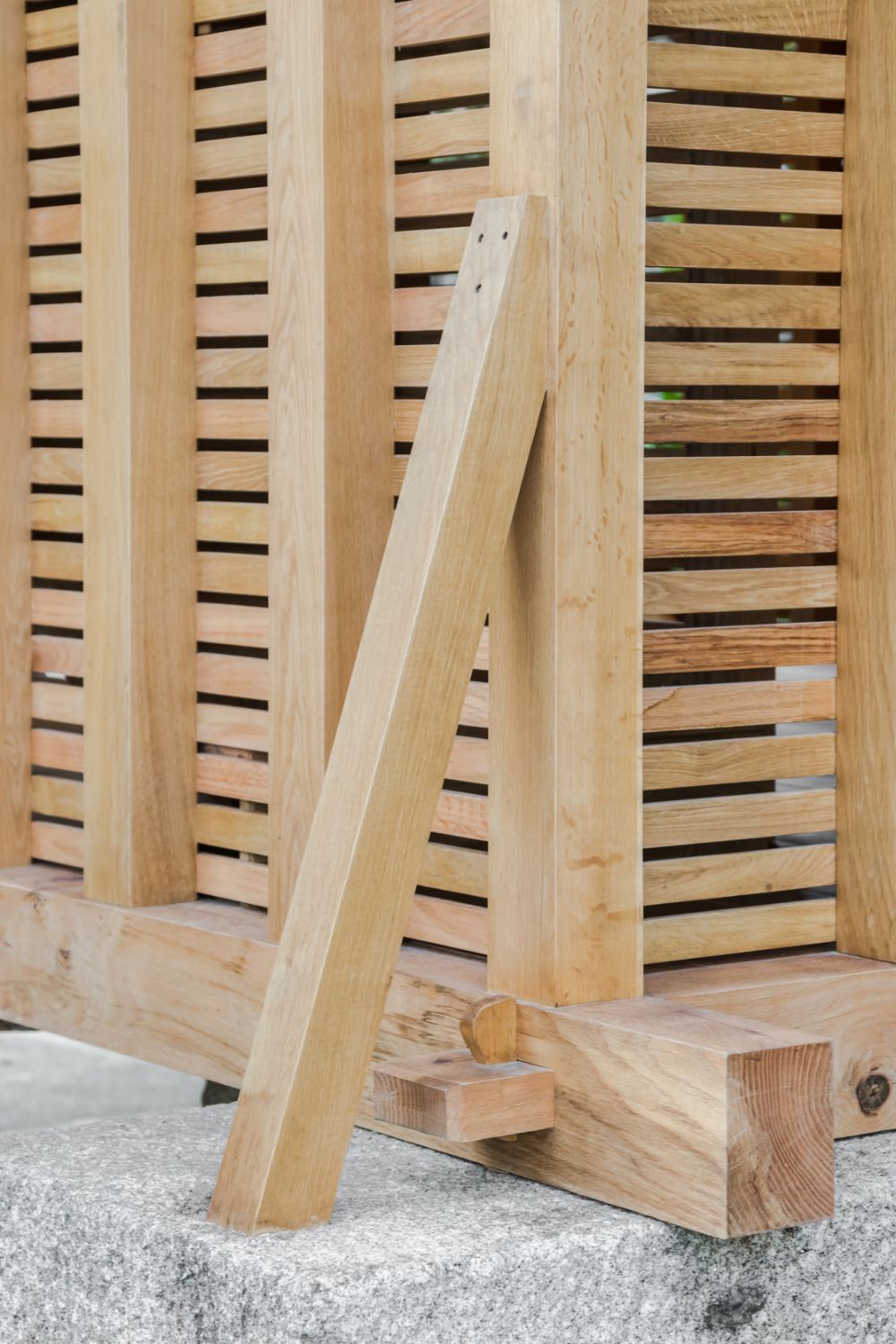 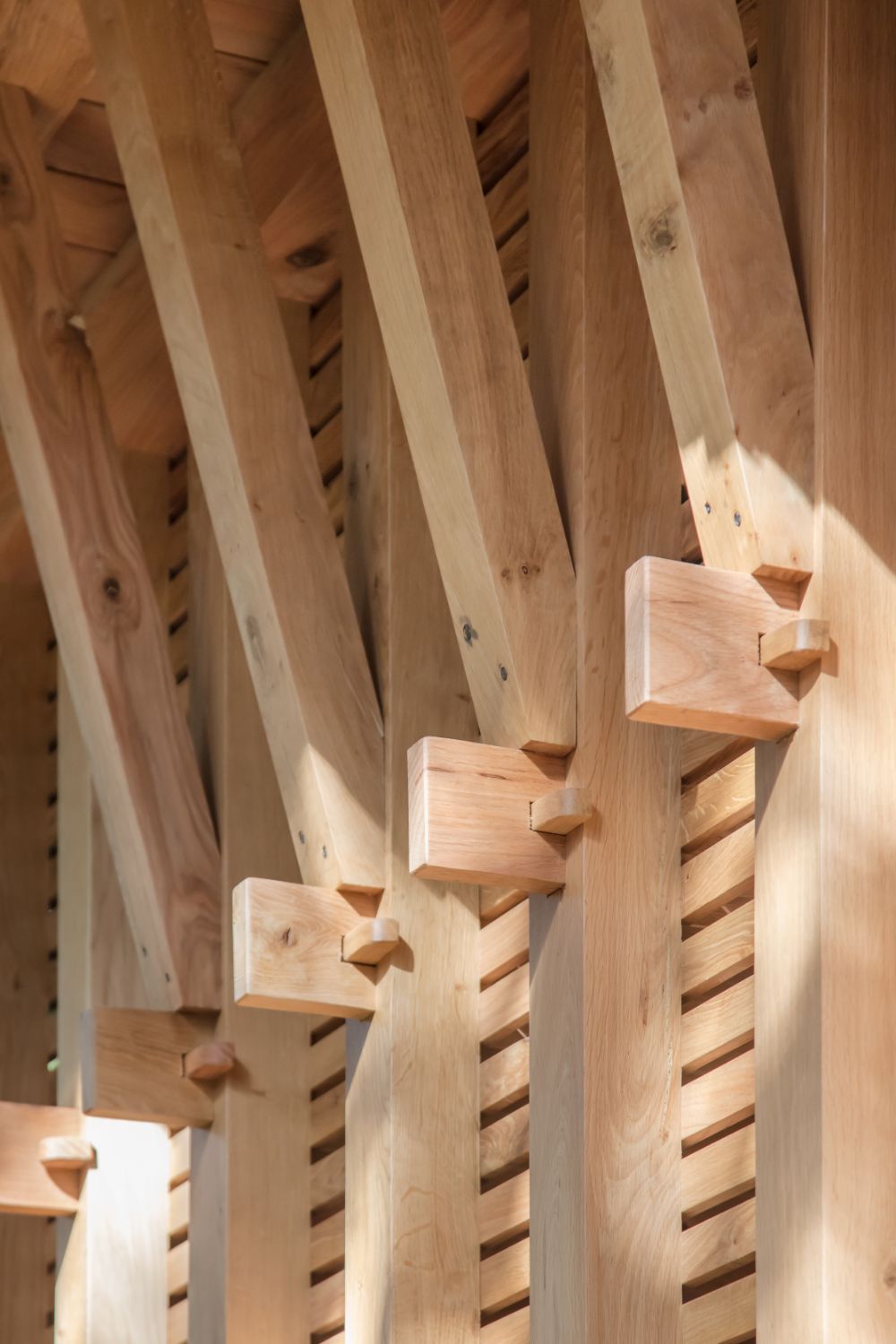 The Dovecote-Granary is a place of serenity and introspection, where one can establish a strong connection with both nature and oneself. Without a conventional function the space is its own purpose: a treehouse-temple of sorts.

Its roots are humble, though unexpectedly pragmatic, creative and sophisticated in their design and solutions: a precious little jewel of vernacular Minho architecture.

Originally built in the late XIX century, its starting point were two traditional northern Portugal maize granaries standing over granite bases. A common roof united them under which there was a dovecote. Finally, the space between the two granaries was used to dry cereals, with two huge basculating panels controlling the ventilation.

This incredible design was an unusual but smart combination of three very common vernacular typologies (granary, dovecote, drying shed) that are still part of our collective memory. The execution, unfortunately, was not without its problems.

Built out of oak wood, the structure was under-dimensioned for the demands of that construction and, receiving no proper maintenance through an important part of its life, the wood rapidly decayed: though still kept standing by steel cables stretched from the adjacent trees it was unsalvageable.

The rotten wood pieces, nevertheless, allowed for the full documentation of the design and constructive techniques of the building as it was when last usable, opening the doors for a piece by piece reconstruction, in the same vein as the Ise Jingu rebuild every 20 years in Japan, but here at the scale of rural northern Portugal, preserving an interesting built vernacular document and using local artisan traditional knowledge to achieve it.

Times changed, though: there’s no farming on the property anymore, so the rebuilt Dovecote-Granary will not serve its original functions in the foreseeable future. It won’t have a specific use either: it will be what the nature of the space lends itself to be.

These circumstances implied not only reconstruction but also transformation, giving form to the theme of the project. The result is an element by element rebuild of the Dovecote-Granary, with an intricate redesign of all the subtle carpentry details and a limited set of surgical interventions that will allow for its safe and renewed use.

To fix the original structural fragility a small number of cross-members was inserted in strategic locations, reflecting solutions found in buildings of similar age, construction techniques and typology.

Two new foldable wood stairs lead inside both granaries and an interior staircase rises to the dovecote, finally making that magical space accessible.

This project matrix was of a strict reconstruction with the added requirement of the most minute intervention to render it usable, enabling the minimal necessary connections inside and out.

These humble constructions are now rapidly disappearing: with no current use and no apparent potential for transformation they are silently disassembled. They fall victims of their frail materiality and of a lack of recognition of their cultural and patrimonial significance. They are not considered valuable enough for systematic study or documentation: once they are gone, they never existed.

This exercise came as a way to show that these constructions can produce very high quality spatial experiences while maintaining a living built document of very special vernacular architecture, using local resources, local artisans and local knowledge, making them pertinent way after their agricultural use passes.

The Dovecote-Granary is now a sanctuary among the tree canopies, an iconic shape in the rural landscape of the Minho region, and the experience of the dancing leaf shadows, the gentle crossing breeze and the birds chirping in a late summer afternoon fully defines its new purpose, function and use.

Link to the project on the architect / engineer website: https://tiagodovale.com/portfolio/dovecote-granary/