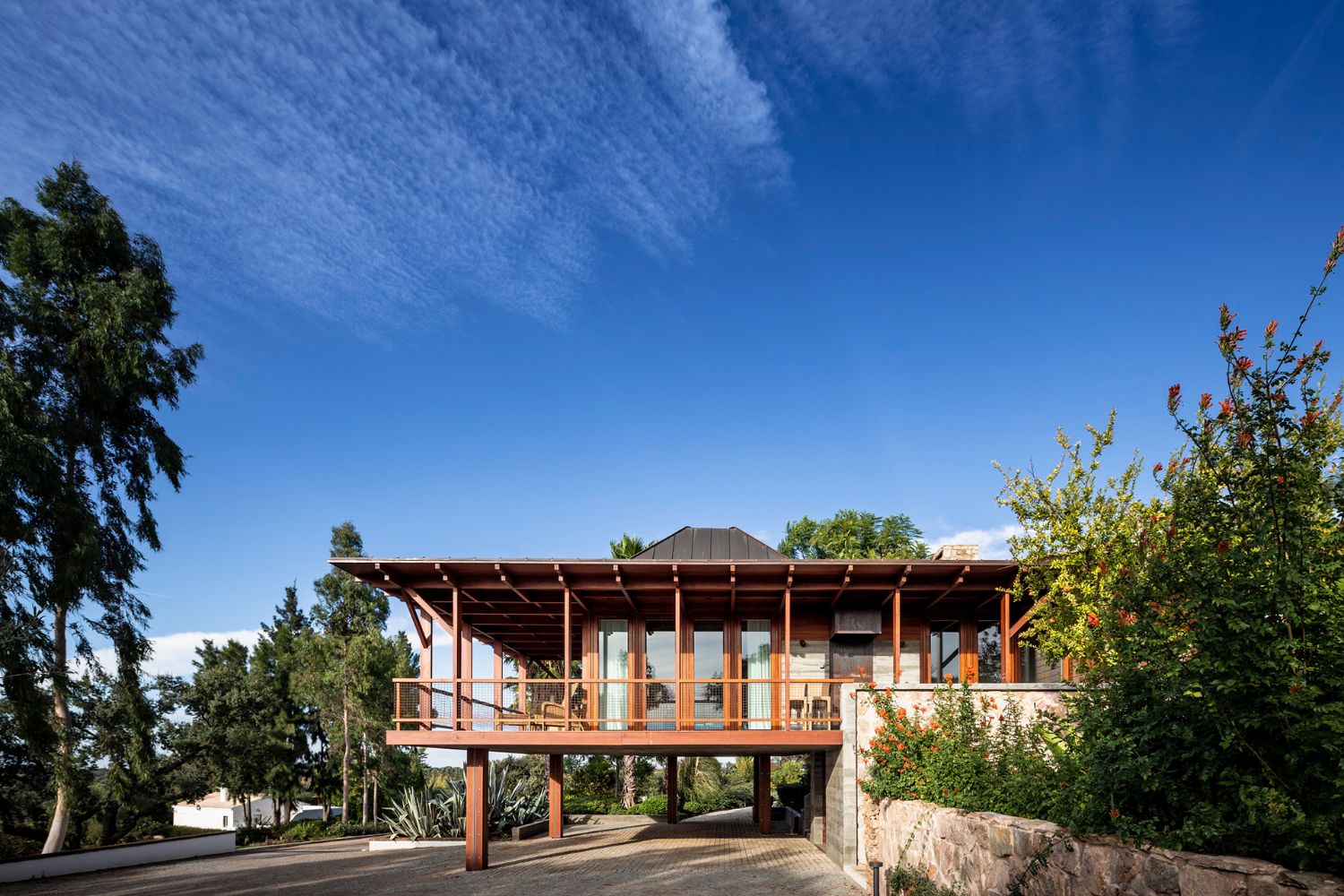 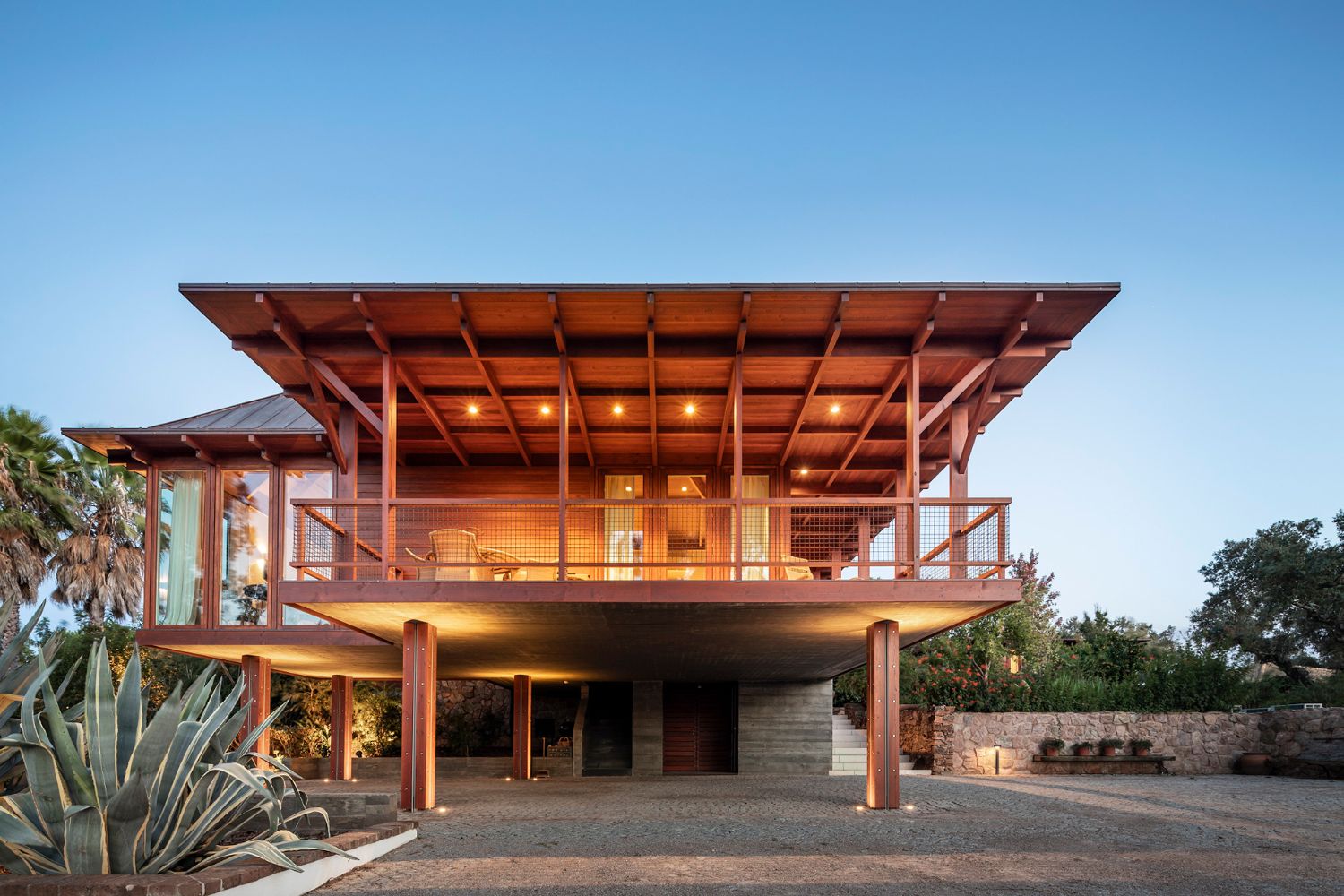 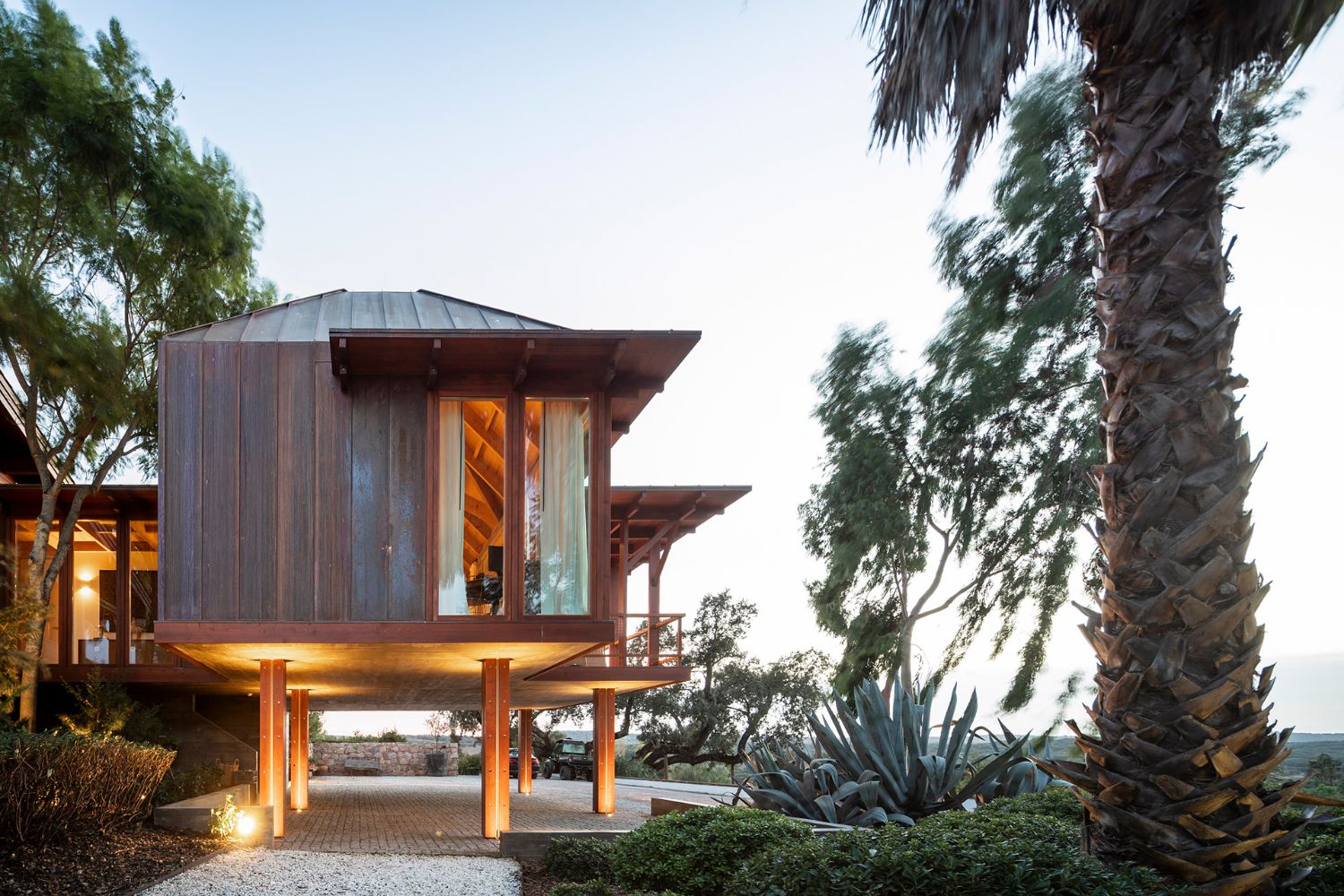 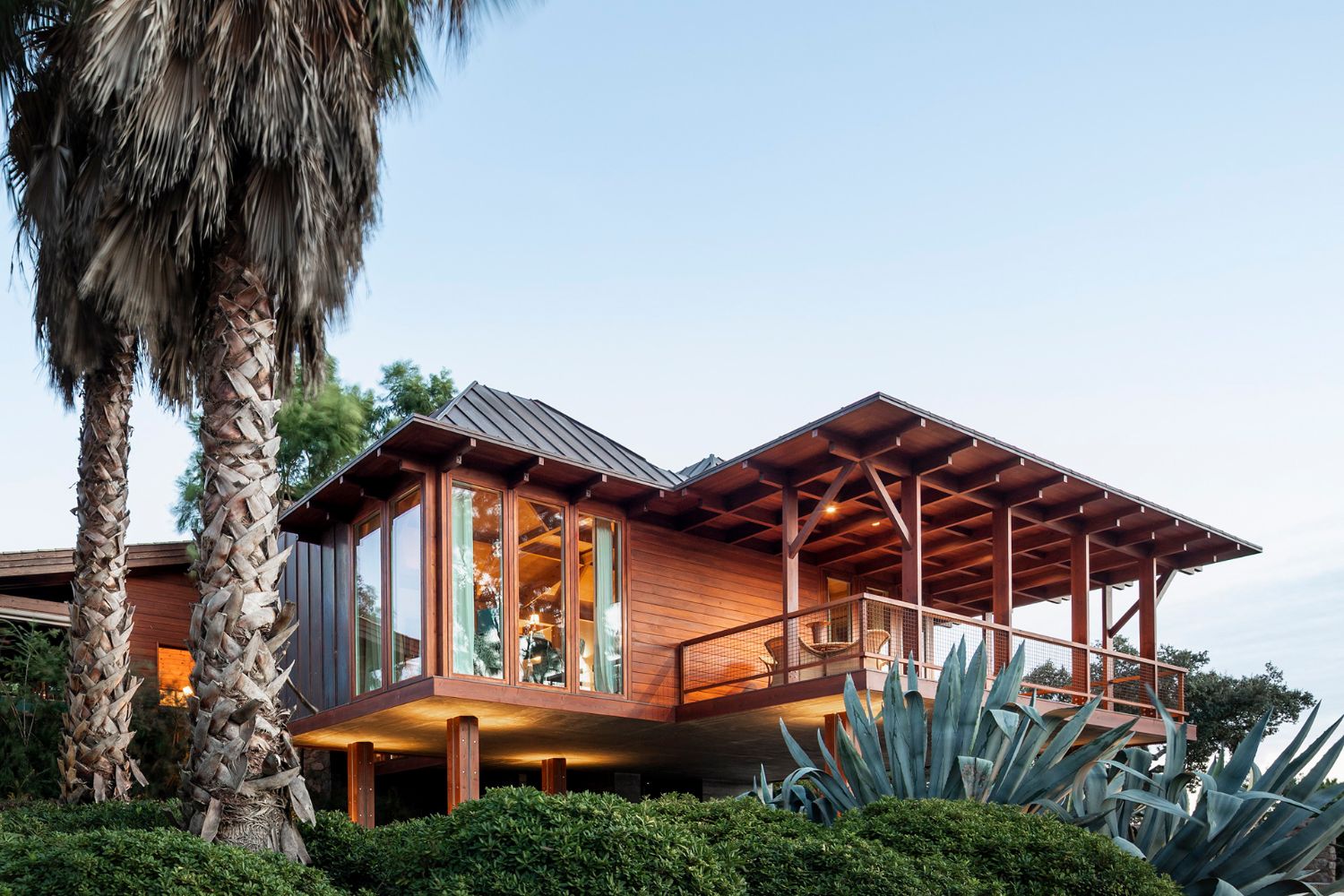 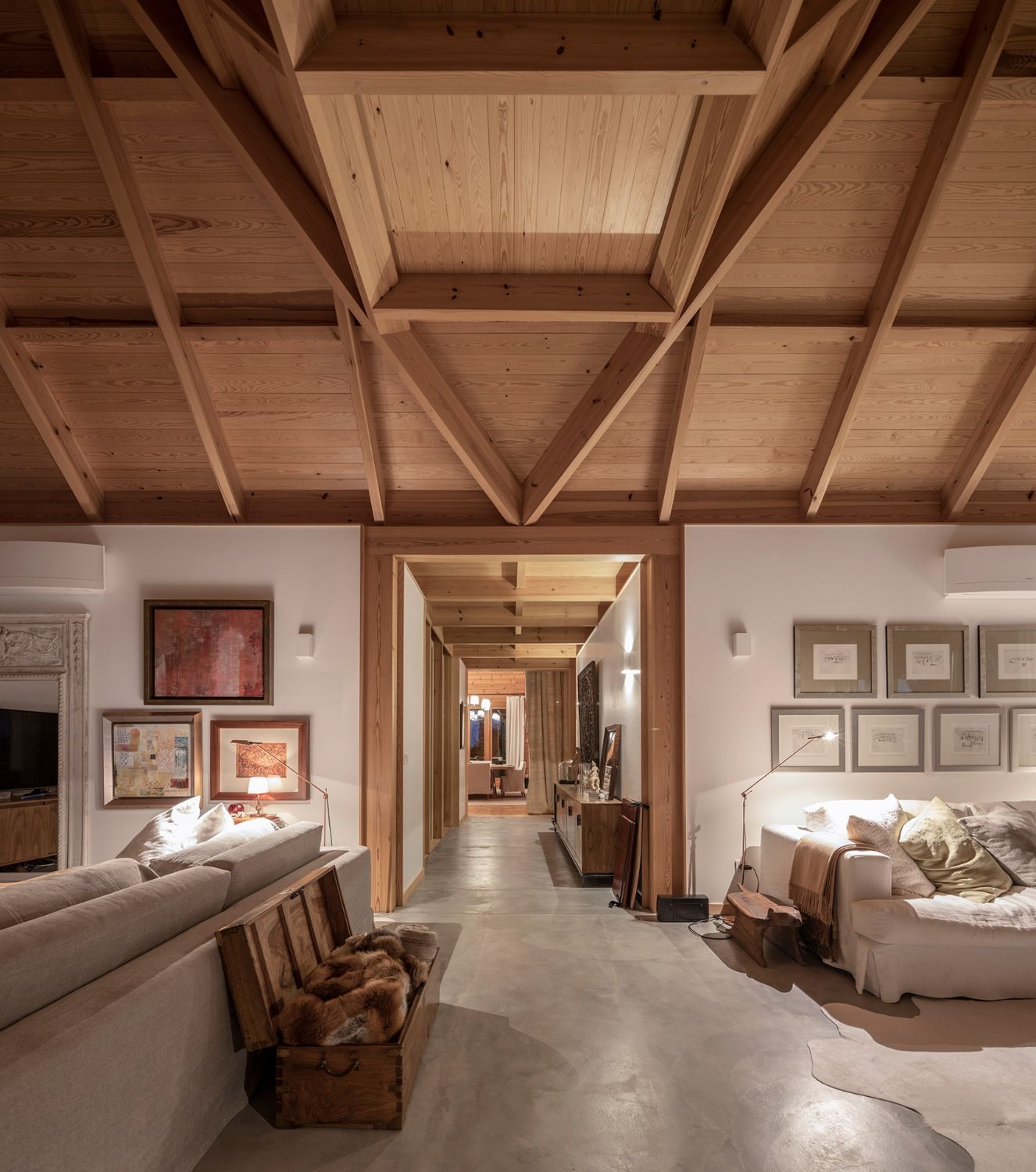 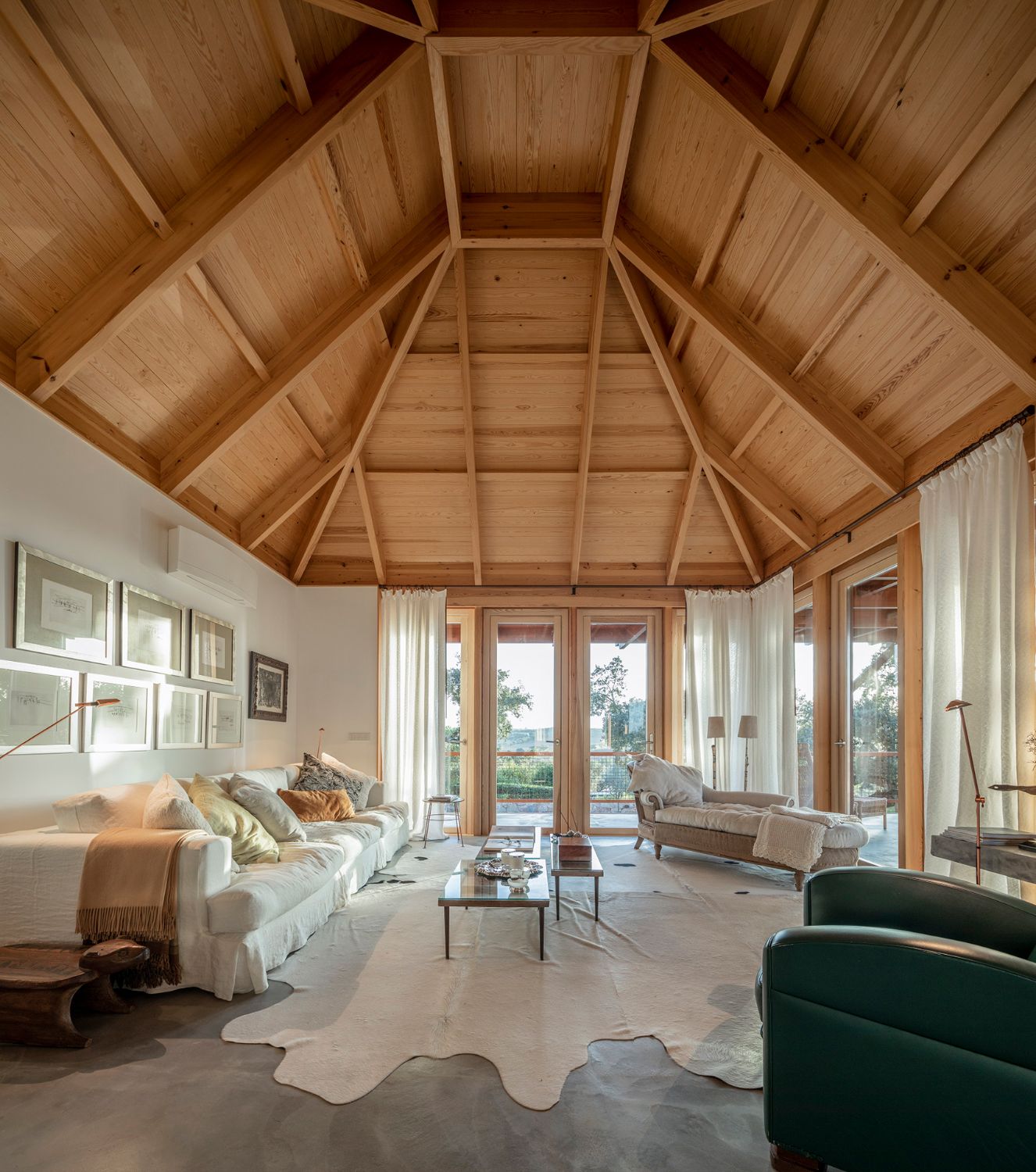 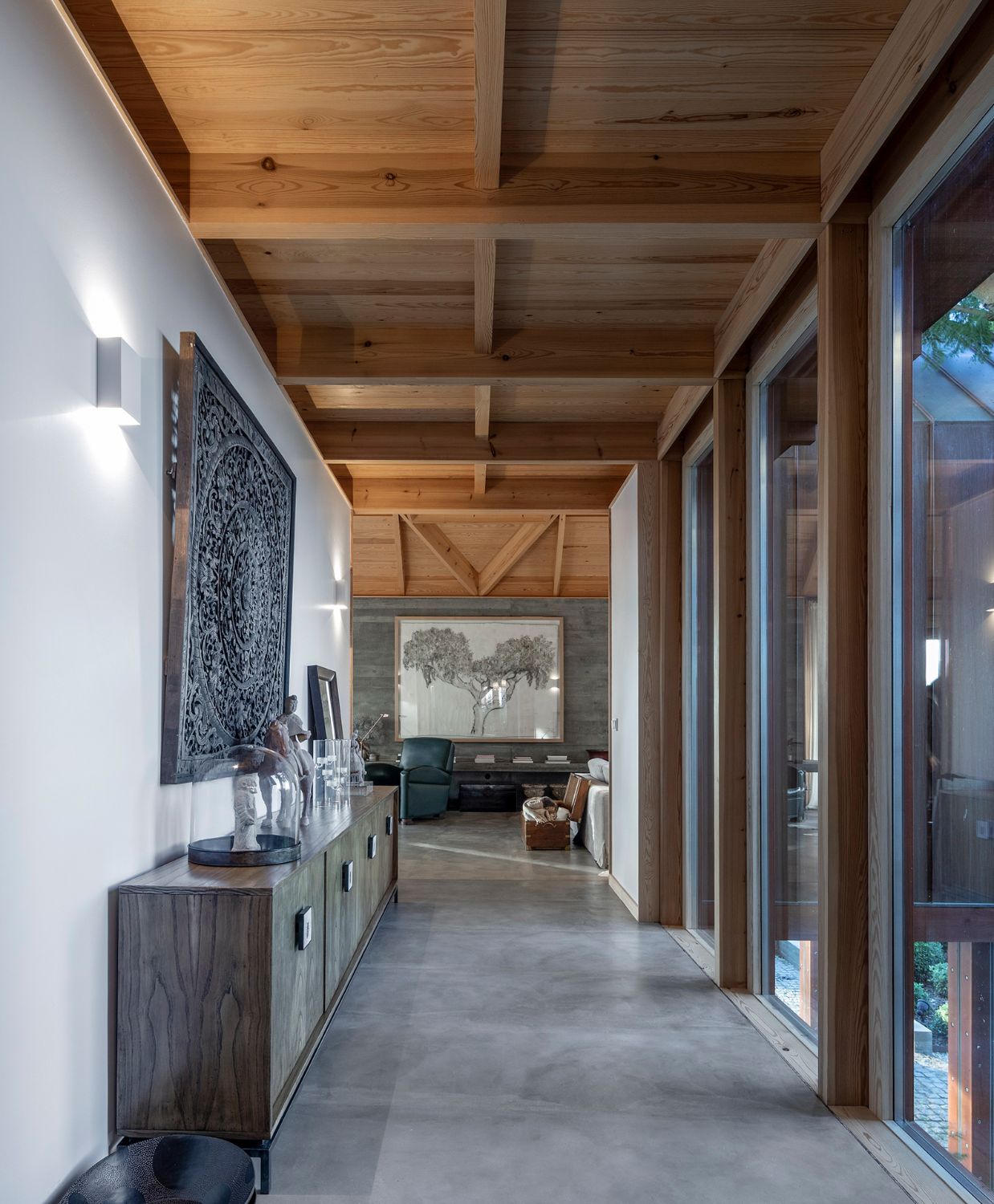 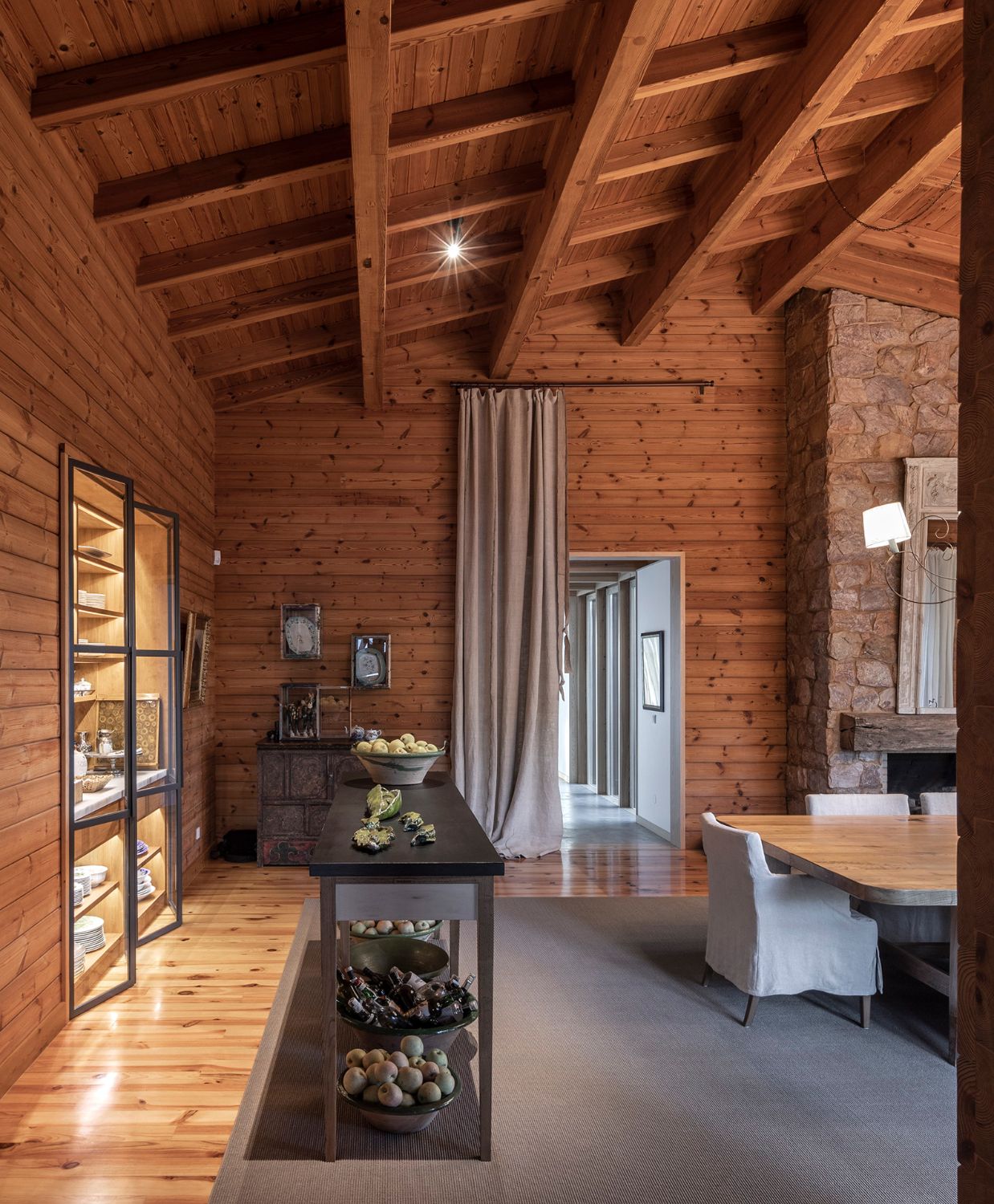 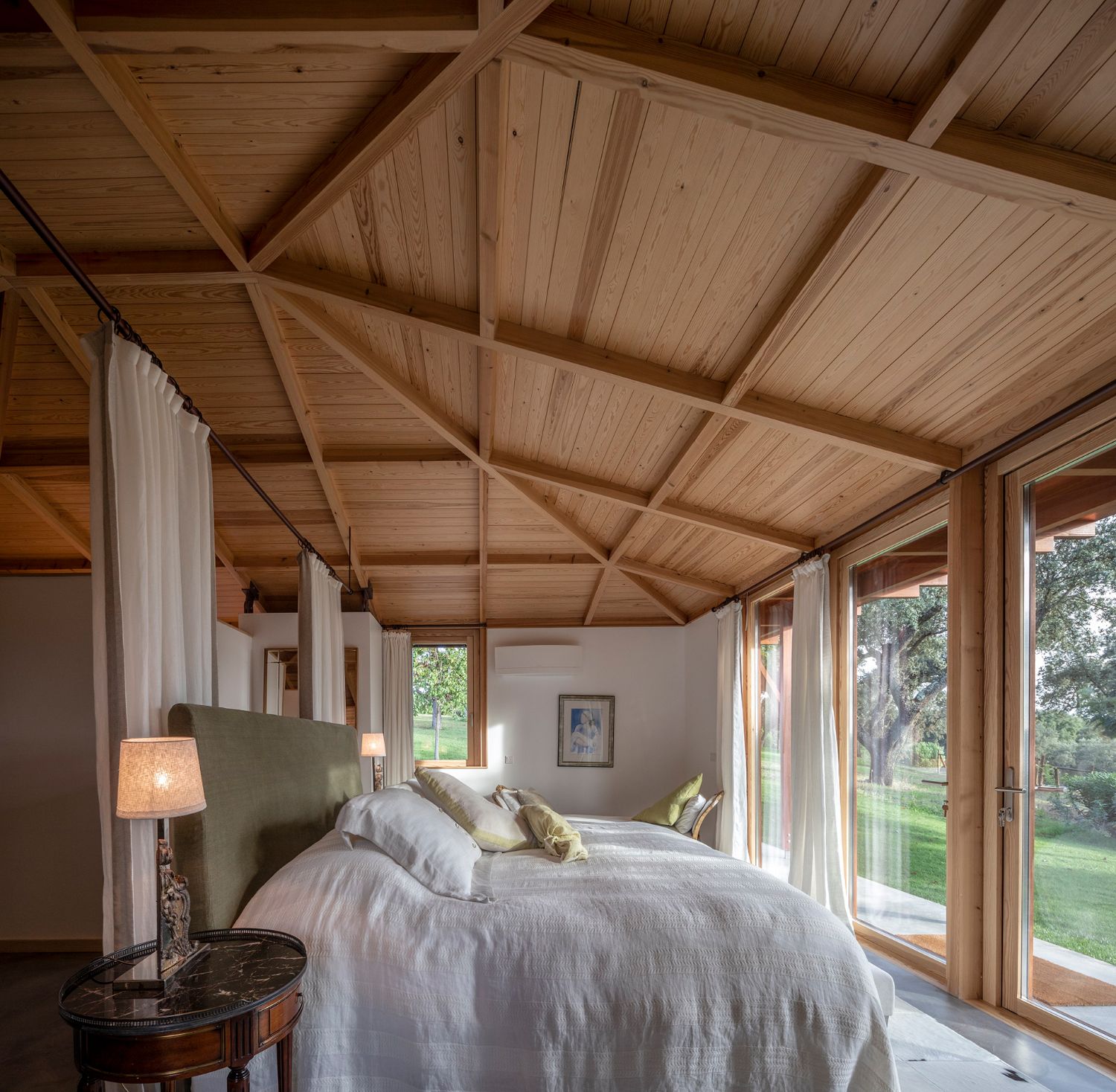 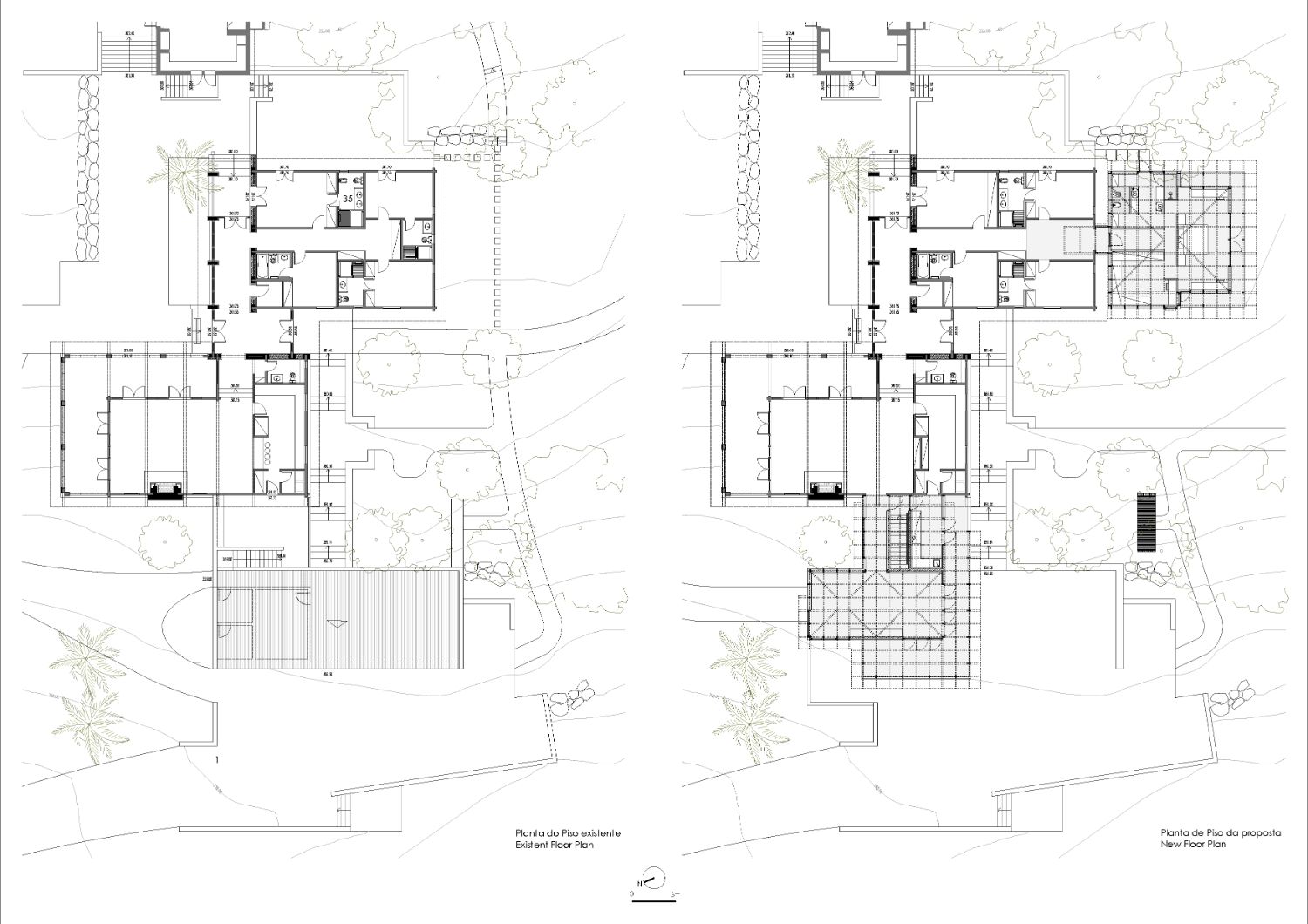 One arrives along a straight line, in amongst holm cork trees that defy all rules of stability, extending their arms into impossible cantilevers.

This is a monte alentejano * and buildings emerge from this hill.

These are recent buildings, and all of them of them built by the owner.

The main building is in timber. Of so-called standard construction, which finds it somewhat difficult in adapting to the topography.

Happy with the experience of living in a wooden house, the now larger family, intend to enlarge the main living room and add a bedroom, so as to create the necessary conditions to live here permanently.

When one begins to alter what’s existing, little by little, it becomes evident that it is not enough to juxtapose or paste in new areas, new volumes.

It is necessary re-organize and make corrections.

It soon became clear that in order to be the respectful to the – well looked after by the owners –  existing fabric, would oblige that the addition of new volumes to the existing would have to be in a way that would allow for the existing to speak, as with the construction, because the house would continue to be in use during the building period.

Far from me to imagine, that, I would one day have to adapt my own architectonic language to an existent construction, of which I am not particularly respectful, but owning to its simple existence and value, I treated as if it were a monument.

Construction drawings were studied, measurements were checked, a topographic survey of the surrounding area was undertaken. All with millimetric precision.

The Main bedroom, stands out by a neck from the other bedroom’s volume, as it extends off the existing corridor.

It adapts its volume and roof to the levels of the existing. Integrating, but creating its own personality and contemporaneity, whilst valuing the existing.

It opens generously to the landscape, whilst creating privacy.

The main living room becomes an isolated covered veranda facing over the landscape towards the west.

It opens the house to the landscape.

This new volume, with its cooper roof and two wooden troughs, creates a new image on arrival, forcing a recreation in the sequence of access, opening up the space, allowing in people and the horizon.

It imposes on the existing, showing volume, space and materiality.

It is juxtaposed, carefully, but it turns out to be dominant or dominator of the whole.

It rises up absorbing the covered space for parking. It sets-out and bestows hierarchy to access whilst hiding technical areas.

The – almost Iush – vegetation is mixed and almost mystic. The almost excessive horizontality of the holm-oaks, contrasts with other more vertical, imported species, which are common in these eclectic gardens.

As it always has been.

The Pavilion is a fait-divers.

Being an Architect brings along this kind of thing. To find a client looking for something that’s not the usual.

What luck! Something that’s built with the passing of time.

It had to be isolated. Music with no restrictions. Books, lots of books. A room for to house a passion for model trains. A small gym.

I brought up this small volume at the highest point of the property.

It levitates, as if something strange was there about to land.  Or to take off? There, in the midst of scots pine.

A large space and two small ones, house the requirements of the brief.

Windows and terraces let in – selectively – the most amazing and never-the-same landscapes.

The smallest space becomes enormous, as it receives furniture, books, objects, sounds systems, machinery and… a surprising and passionate construction of model trains, with its own hills and mountains, stations and villages.

All that’s needed to enchant just about anyone.

It is a mixed type of construction with a language – or morphology- that’s intended to be different from that of the housing complex.

It is there, isolated, levitating and ready to go…dreaming

Link to the project on the architect / engineer website: https://www.carloscastanheira.pt/project/barrocas-main-house-expansion/