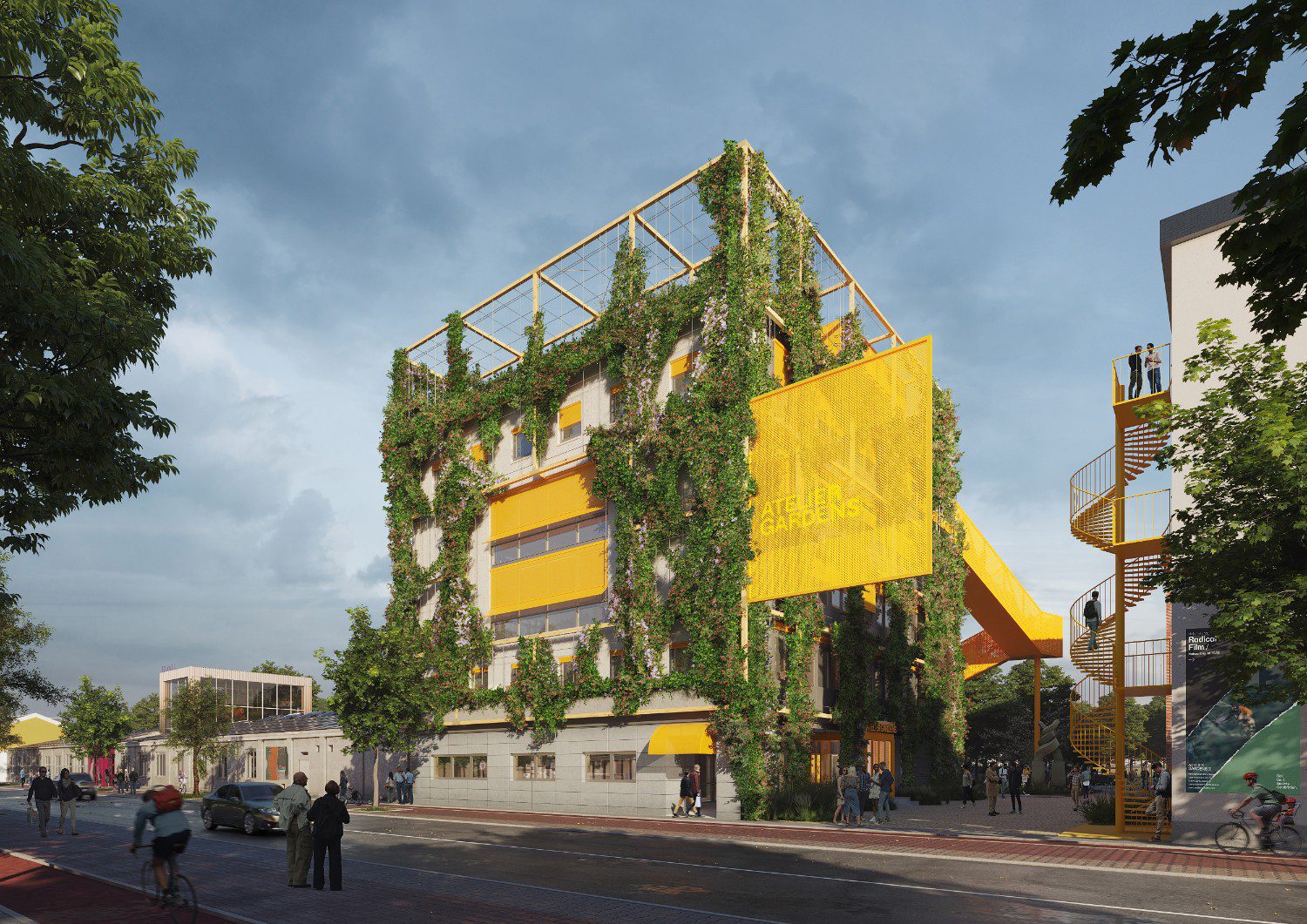 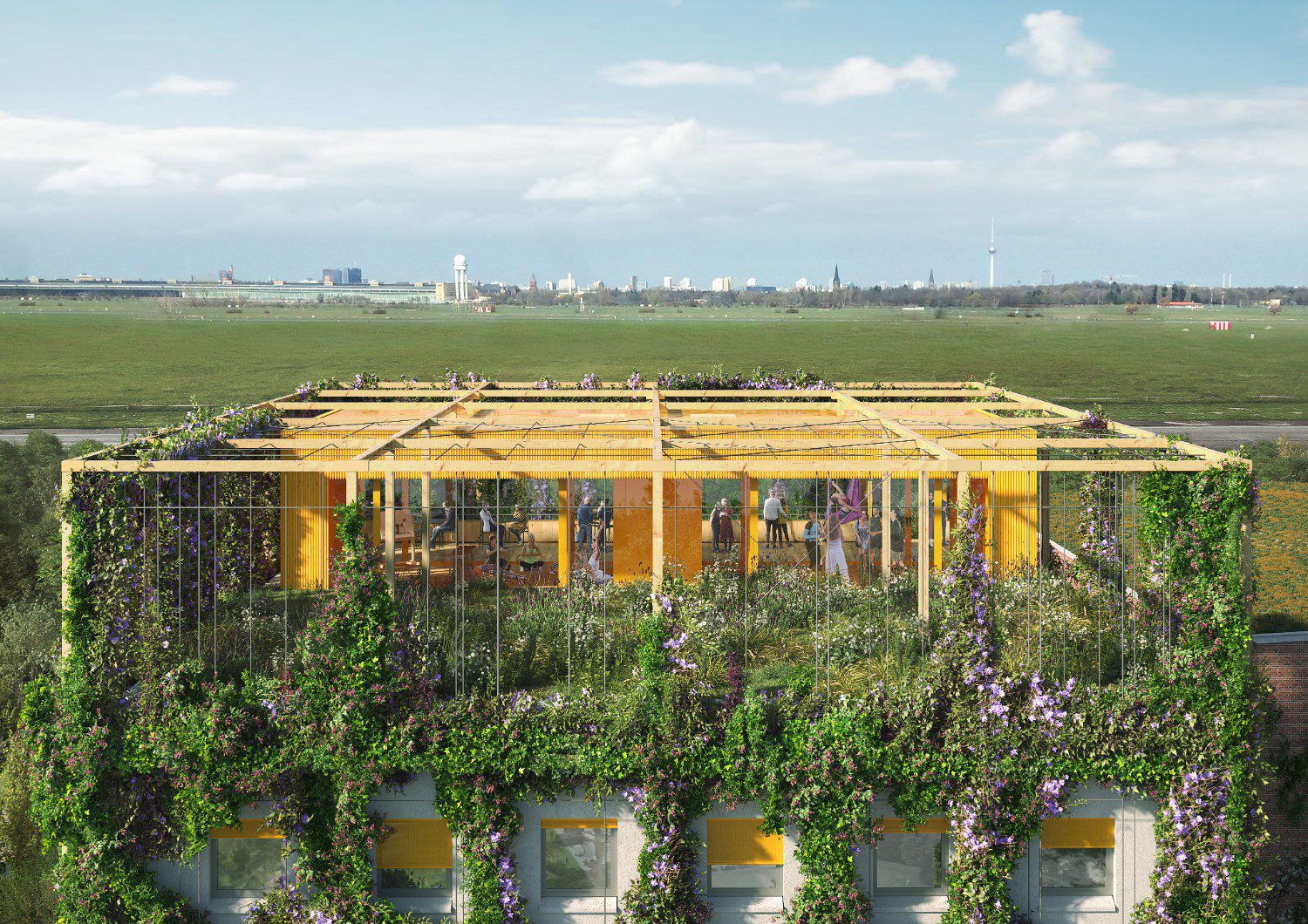 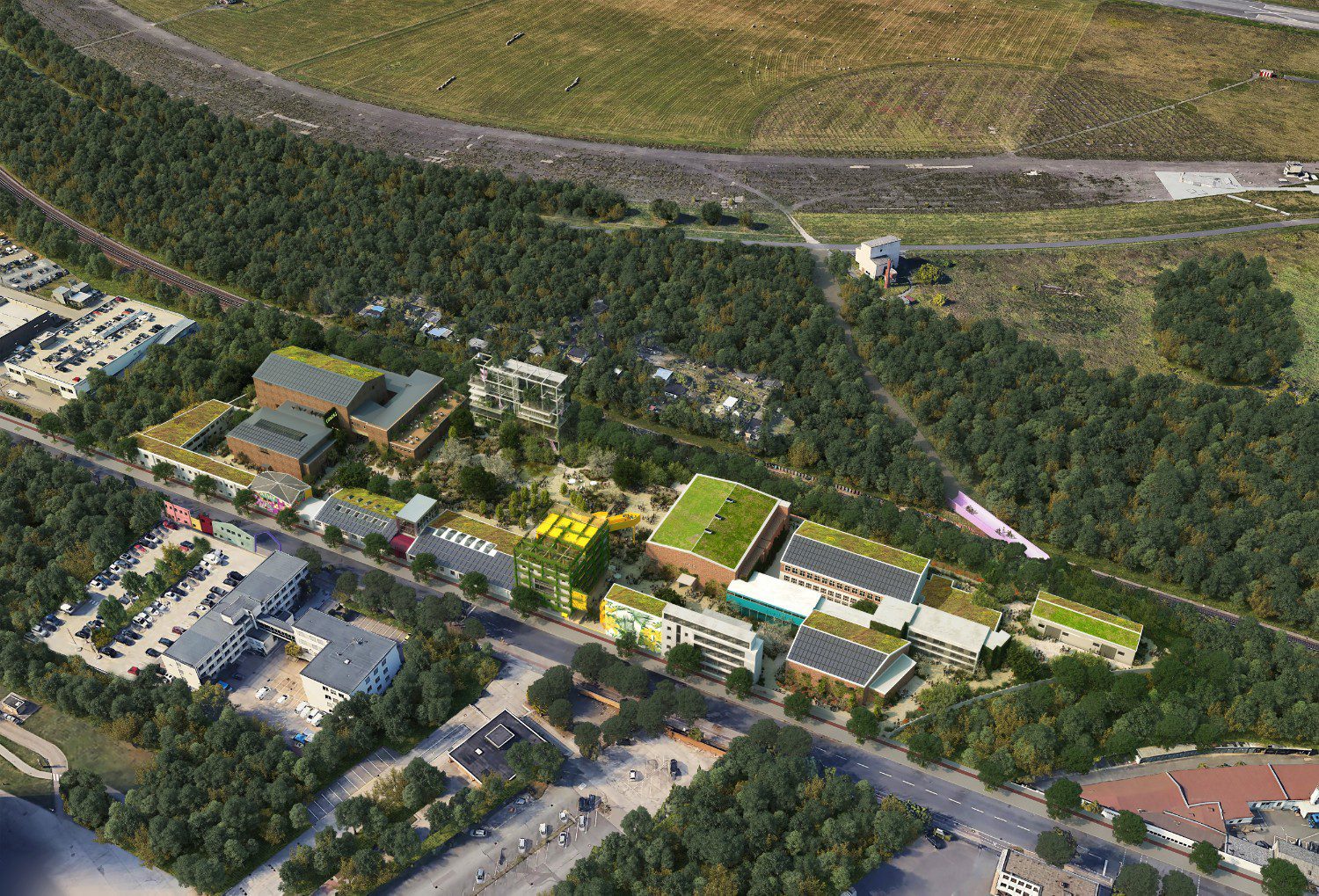 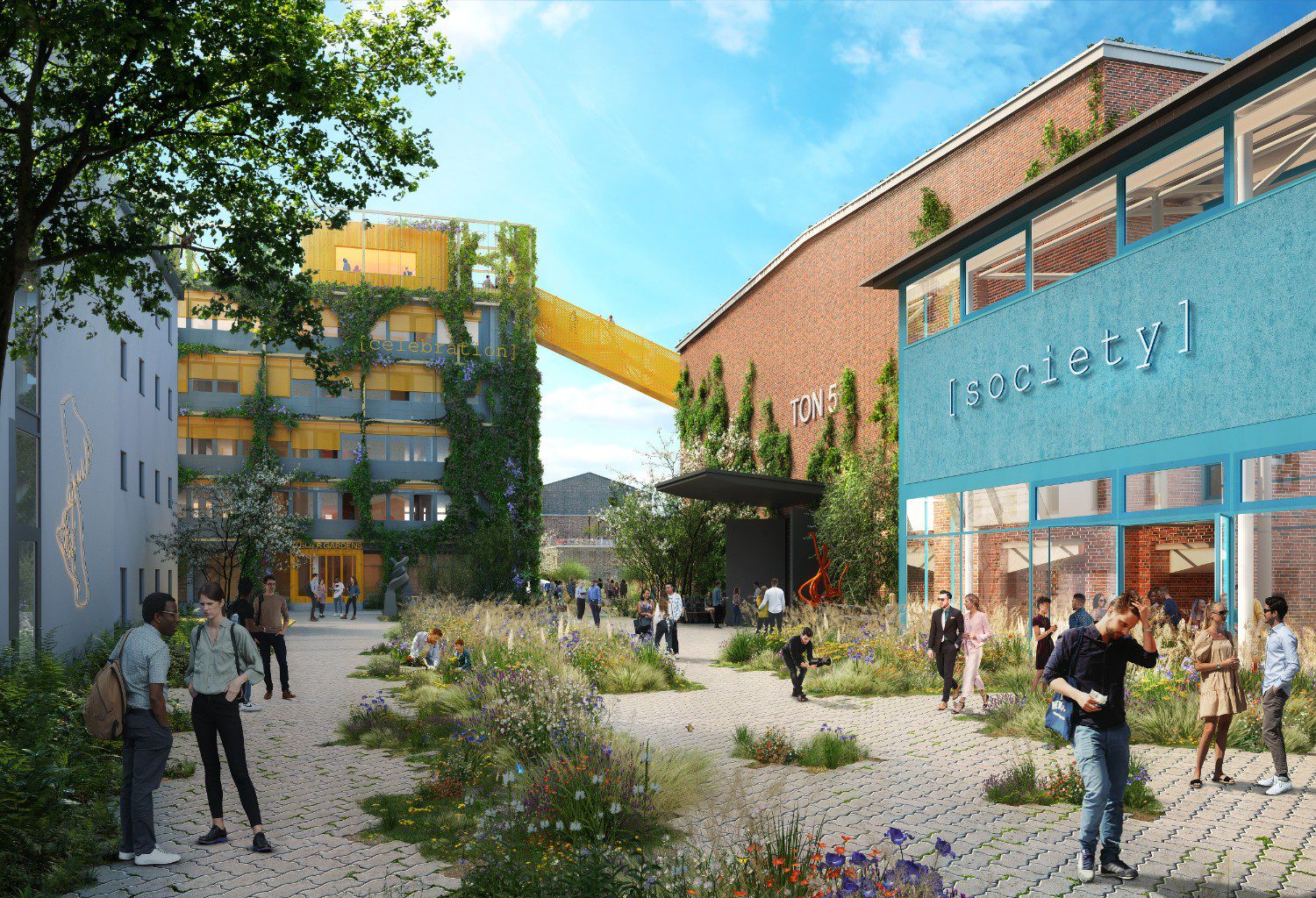 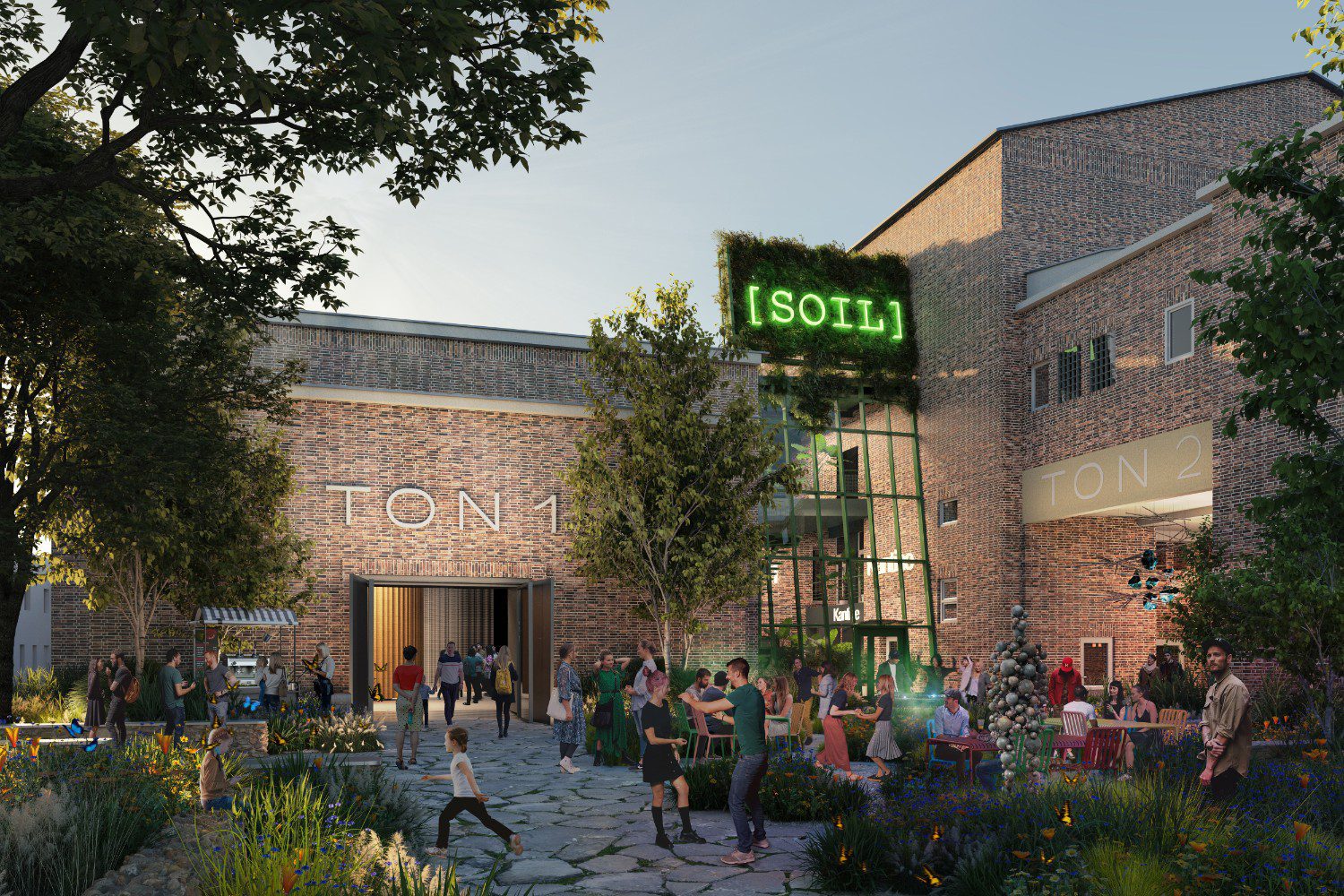 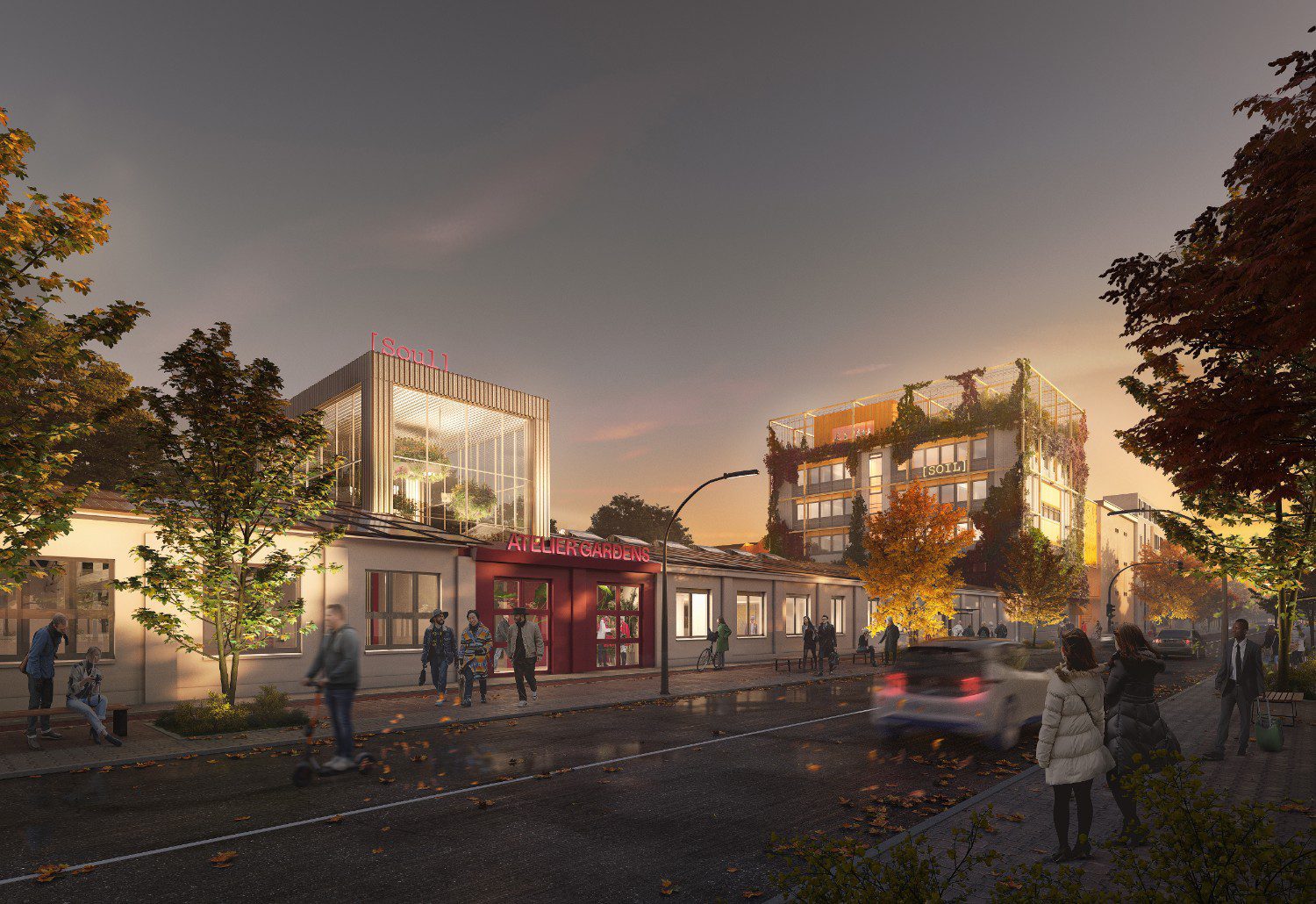 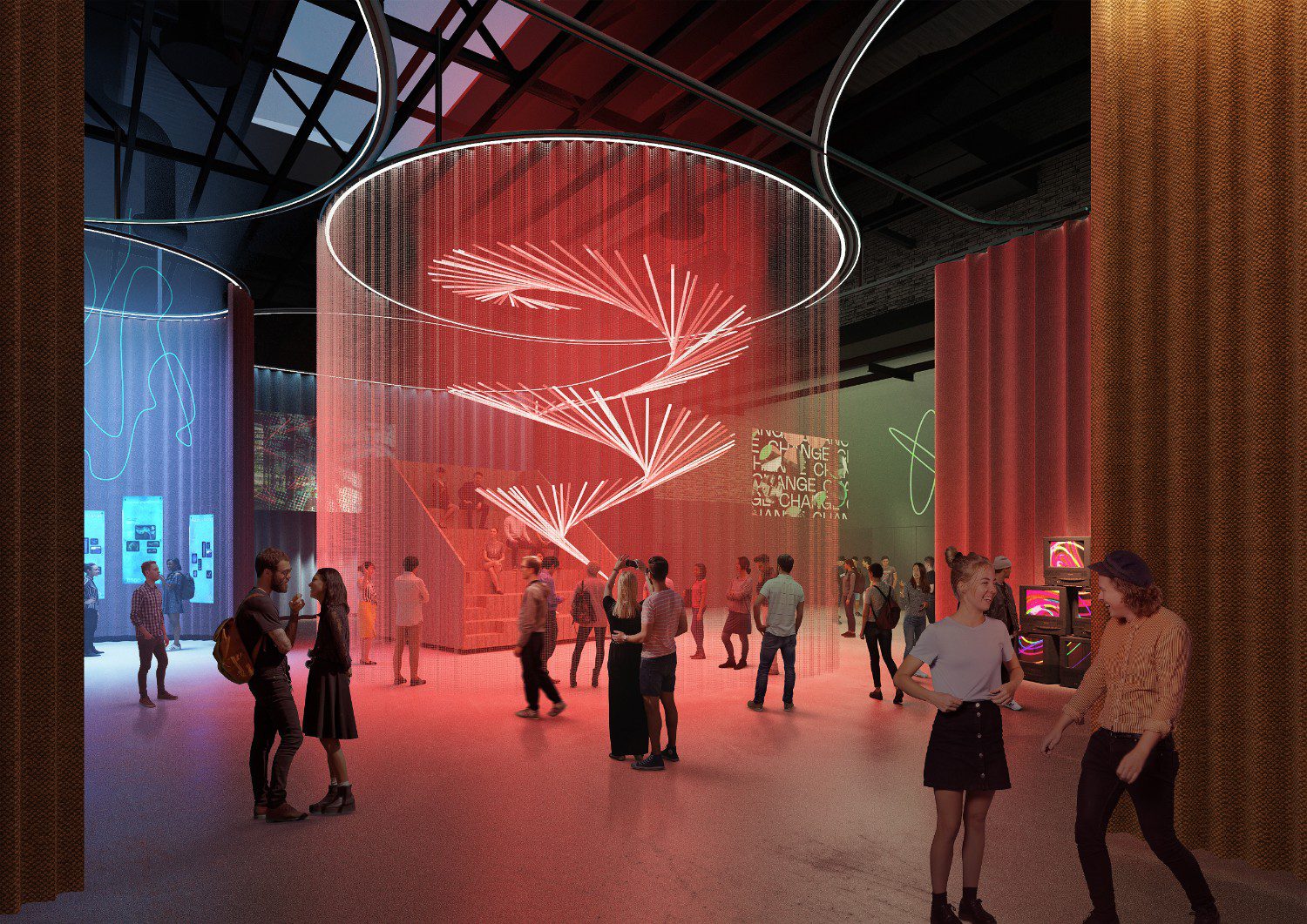 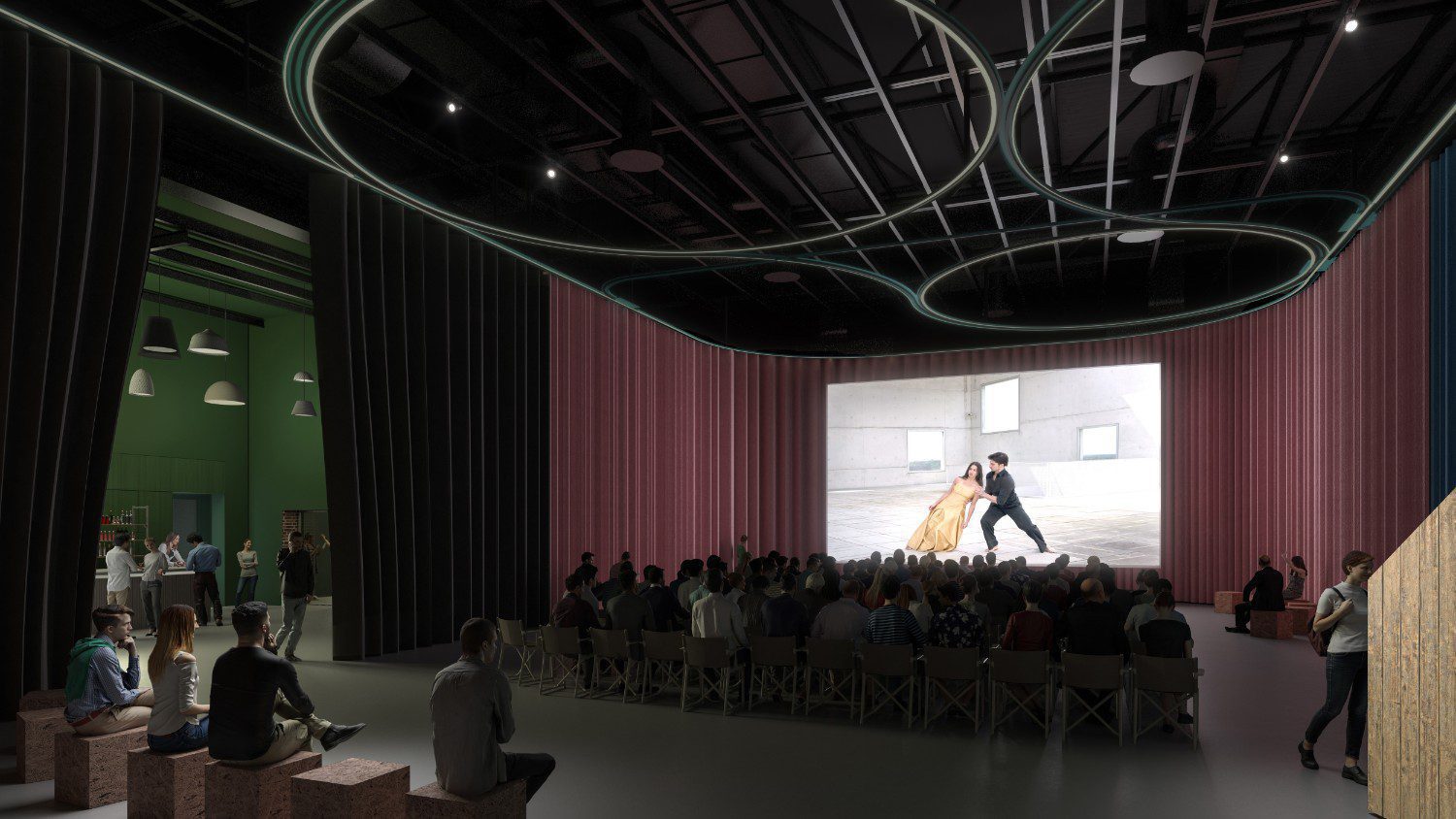 MVRDV has received planning approval for the first two buildings in Atelier Gardens, a proposal to sustainably transform the campus of Berliner Union Film Ateliers (BUFA). Situated on the southern edge of Berlin’s Tempelhof Airport, BUFA has been a key part of Berlin’s film and television industry since its first buildings were constructed over a century ago. Now, BUFA is expanding its user base beyond filmmakers to encompass all forms of ‘change makers’, including organisations and individuals with a focus on activism and social justice – catalysed by a change of identity in its physical spaces.

The five filming studios and assortment of ancillary facilities form a dense campus: large, charismatic brick buildings define narrow alleys and open plazas. MVRDV’s design preserves and enhances this spatial diversity: a series of sustainable transformations, which take advantage of the existing structures rather than demolishing and rebuilding, refresh the buildings while maximising the potential of the spaces between.

The campus will be transformed with an ecologically focused landscape: large areas of paving are removed, eliminating vehicles and adding water permeability and biodiversity with rooftop gardens and green plazas. Other sustainability measures are also incorporated, such as eco-toilets, rainwater collection and water recycling, and improved natural ventilation. Another proposal currently under consideration would see steel salvaged from the demolition of two outdated warehouses reused directly on site to create a new entrance pavilion.

The masterplan for the 23,800m2 campus takes an incremental approach to refresh the film studios, considering each building transformation as a response to the previous ones. The first of these developments, which have recently received construction approval, are the transformation of the building next to the main entrance known as House 1, and the renovation of Studio 1.

At almost 100 years old, Studio 1 is somewhat outdated for modern film production, being used most in recent years for television productions and commercials. It is also a listed building, which necessitated a design that creates a flexible space for a variety of uses without permanently altering the existing features of the building in any significant way. The design needed to lengthen the lifespan of the building to ensure a sustainable future for the campus while also respecting its history.

MVRDV’s design achieves this through a “low tech transformation” with one stand-out feature: an intricate overhead curtain rail that – unlike in most film studios where curtain rails are hidden – becomes a focal point of the space. The rail supports a variety of curtains in a range of bright colours, from raspberry to honey yellow, that can be used to divide the space, each with different functions (such as acoustic curtains and translucent curtains). In this way, the new additions contrast the original building: flexible instead of fixed, and colourful instead of black. Brick walls are kept visible, while above the curtain rail, a skylight is added in the roof of the building to make the space more suitable for different uses. Other features of the building are updated, with new interior surfaces and a new more efficient ventilation system.

The transformation of House 1, which was originally built in 1997, is more radical. The building has a poor indoor climate, with overheating in summer and poorly insulated walls. It is made more efficient by a green “wrap”, created with a wooden frame and climbing plants, delivering maximum impact with minimal material. This frame extends above the roofline to form a sheltered garden and rooftop pavilion, accessible from both the building itself and a zig-zagging staircase that leads directly to the rooftop. Inside, the building will host flexible workspaces, a café-bar, and meeting spaces, with a similar goal of achieving maximum performance improvement with minimal new material.

“With its new focus on social causes, Atelier Gardens helps to define a different vision of society, and invite more people to join in that vision”, says MVRDV founding partner Jacob van Rijs. “By transforming this important piece of Berlin’s film history, we extend its lifespan to connect an exciting past with an optimistic future.”

“Our vision for Atelier Gardens is to build on BUFA’s history as a place of energy and passion and work with creative, forward thinking people to build a home for exchange, action and global impact”, says Fabrix CEO Clive Nichol. The original studios serve as a reminder of the creative impulse that Berlin gave the world in the 1920s and are a starting point and inspiration for the journey we are now embarking on. As with all of our projects we are repurposing the existing buildings and adapting their use to meet the evolving needs of our urban environments.”

As the next step in the story of the BUFA campus, Atelier Gardens will pioneer the future of farming, food, finance, film, leadership, education, and other sectors that benefit from direct democratic participation. As such, the transformation of the campus into Atelier Gardens is considered as a collection of pilot projects – an ongoing process in which the participation and feedback of the users would help to clarify the direction of the campus as a whole.

MVRDV is designing the Tempelhof masterplan and the buildings within it for London-based property investor and developer Fabrix. The design of Studio 1 was developed in collaboration with local co-architect HS-Architekten, while London-based designers Harris Bugg Studio developed the masterplan’s landscape design.

Link to the project on the architect / engineer website: https://mvrdv.nl/projects/594/atelier-gardens