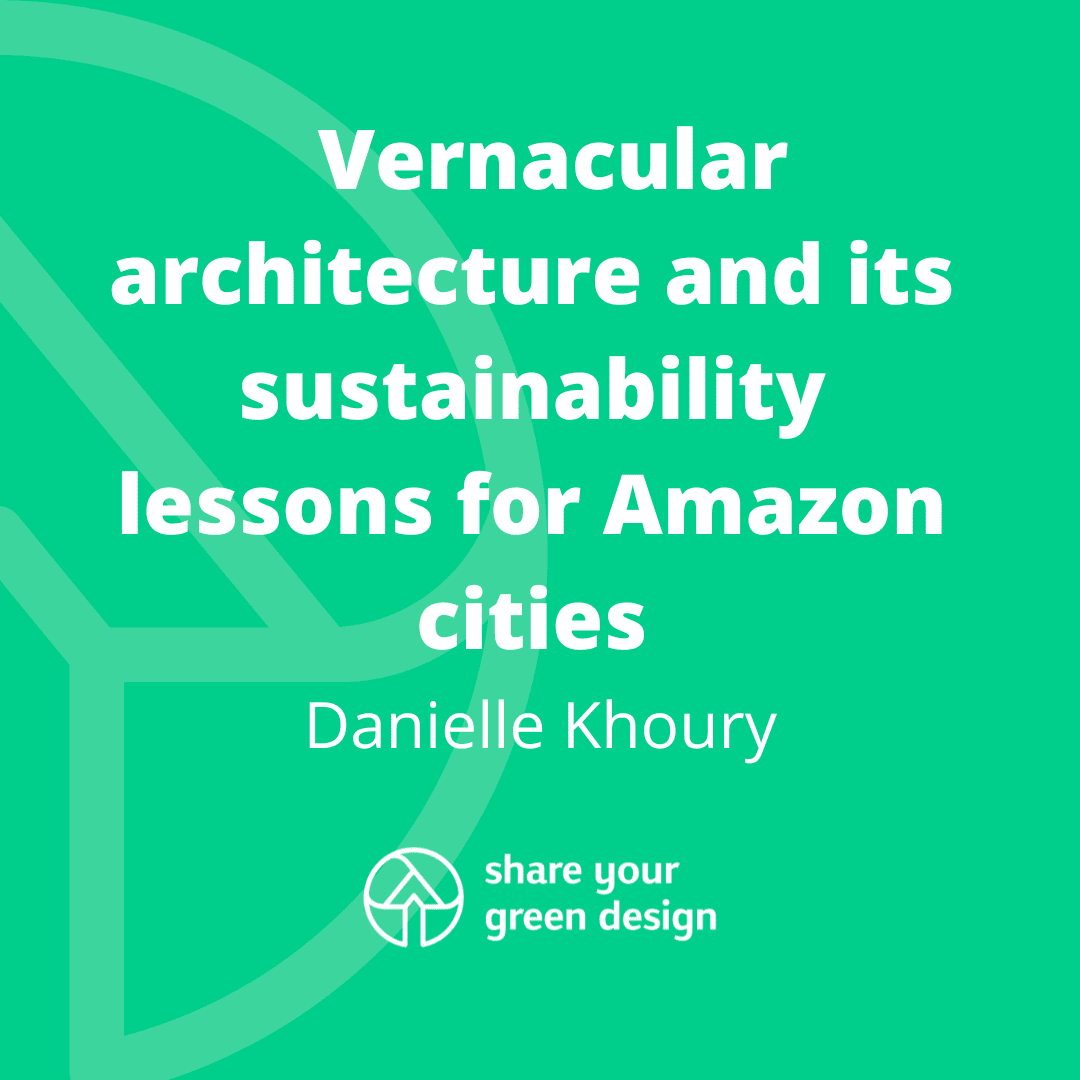 The traditional Amazon architecture reveals precise knowledge and techniques for the construction of buildings in great harmony with the natural landscape. An in-depth study of local architecture can provide relevant lessons about sustainable construction, enabling the design of buildings with greater energy efficiency, lower environmental impact and that are better integrated into the territory

To inhabit the complex Amazon region, traditional riverside communities have developed over generations an architecture adapted to local conditions, establishing an optimal relationship between people and their place. Using local materials and technology emerging from the natural and cultural environment, this architecture reveals simple and ingenious solutions for sustaining local life.
Nevertheless, over the last few centuries vernacular architecture has been gradually eliminated from urban occupations of the region, being replaced by one of a global nature, seen as more developed and modern. As a result, a generic model of urban space was created, ignoring local culture and leading to environmental destruction and disasters.

The traditional architecture of riverine people in the Amazon

To understand Amazonian architecture, it is first necessary to study the unique characteristics of the Great Amazon Basin region. The area has a predominantly hot and humid climate, where two very distinct periods stand out throughout the year: the period of persistent rains, known as “regional winter”, which comprises the months of January to April, and the “Amazonian summer”, marked by less frequent rains, from June to November. This variation between periods of drought and periods of heavy rains has a great influence on the configuration of the local landscape. For example, the level of the Amazonas River has a fluctuation of around 10 meters over the year. Depending on the time of year, the width and extent of river beds change, islands disappear and reappear and lakes and ponds expand and contract.
The hydrological cycle of the region not only changes the landscape but also influences the life of the riverside populations. They have adapted their way of living to this annual variation, which their traditional architecture reflects.
There are basically two different types of riverside housing: the stilt and the floating houses. Both solutions bring inventiveness and adequacy between technique and the environment. The stilt houses are built on wooden pillars. They have a simple configuration, usually with only one room that works as a bedroom, living room, and kitchen in one. This type of layout allows for good ventilation of the internal space of the house, being an example of an adaptation to the local hot climate. The house is built using local, abundant materials, such as wood, jungle vines, and leaves. To assemble the walls, Paxiúba wood (Iriartea exorriza) which grows in the igapós (periodically flooded areas) and reaches heights of 10 to 15 meters, is most frequently used. The use of Araracanga (Aspidosperma desmanthum) and Angelim (Hymenolobium petraem) are also frequent. They are even used for flooring the house, as well as for the production of furniture. For the structure, the species very resistant to water are used [1]. Traditionally, the roof is made of straw, using the leaves of the Paxiúba or palm trees. The durability of the materials is varied: a straw roof lasts, on average, four years. The walls and wooden floors, with good maintenance, last up to 10 years, while the structures made of Itaúba or Maçaranduba have a useful life of around 40 years [1].
The floating house resembles the stilt house in the choice of construction materials and layout but differs in that it is not attached to the ground. It floats on water, being able to change places. In addition, it has the advantage of being less vulnerable to river floods and ebbs. The traditional house is built on logs of Assacu (Hura crepitans), light wood with low density that floats on water. It is a typical tree of the floodplain forest (Igapós), so it is very resistant to the water and can be used for more than 40 years [1].
Both floating and stilt houses are expressions of a material culture that obeys precise knowledge and techniques, an essential condition for their durability, safety, and adequacy to the demands of life in the Great Amazon River Basin.

Negative impacts of the Globalized Architecture

From the 19th century onwards, with the rapid economic growth coming from the exploitation of rubber (Hevea Brasiliensis), main Amazon cities have undergone a process of intense urbanization. In the city of Manaus, capital of the Amazonas state, several hills were razed and rivers filled in to open new avenues and boulevards, following an external model of urbanism. This process, consequently, transformed the original, rich, and complex landscape of Manaus into a homogeneous scenario that has lost a dialog with the surrounding environment [2].
The influence of foreign culture changed not only the urban plan of Manaus but also its architecture. A new urban landscape was defined, from a romanticized neoclassical to the innovations of art-nouveau. Imposing and luxurious buildings were built, such as the Amazonas Theater, the Government Palace, and the Municipal Market. The city came to be known as the “tropical Paris”. It was the Manaus of avenues, cafes, theatre, palaces, of a sanitized urbanism, articulating the city to the world and despising the history and culture of the place [3].
The globalized model of architecture and urbanism was even strengthened during the implementation of the industrial center in Manaus in the 60s when the government sought to bring development and progress to the Amazon. The traditional stilt and floating houses were gradually removed from the urban space, described by the authorities as a symbol of urban disorganization, and characterized as unsanitary, ugly, and outdated, as opposed to what the new political order proposed.
A great example of the government’s effort to control the urban space of Manaus was the destruction of the “Floating City” in 1965, an agglomeration of more than 2000 buildings floating on the Negro River. All households were forced to leave the region. Today, still large urban interventions are carried out, altering profoundly the local landscape and ignoring traditional ways of life.

The construction of standardized buildings not only represents a problem for the maintenance of the local culture, but can also increase the environmental impacts arising from the civil construction sector. As most of the buildings are designed without taking into account the local climate, which is extremely hot and humid, there is an increase in their energy consumption, mainly linked to the high use of air conditioning. Furthermore, by ignoring the knowledge present in the architecture of stilts and floating buildings, the city is unable to adapt to the natural variation of river levels. In 2020, for example, Manaus city center was completely flooded for two months. It was necessary to build temporary walkways to allow the population to circulate through the area.
The local architecture, having been developed specifically for the Amazon region, has answers for the construction of buildings in harmony with the local climate and natural cycles. Designing cities taking this knowledge into account would not only help to increase the energy efficiency of buildings but would also allow for the construction of space in dialogue with rivers and the Amazonian landscape.

Fortunately, there are also architects in the Amazon region who promote dialogue between traditional and contemporary techniques as an alternative to the generic architecture of the main cities. One of them is the architect Samuel Bravo. In his project “ANI NII SHÖBO”, Samuel was inspired by traditional stilt buildings.
The construction is located in an area periodically flooded by the Ucayali river. The building consists of a series of programs, including housing and service spaces, located along this variable edge between forest and water. The project involved local labour and featured local techniques and materials such as capirona and quinilla wood and irapay palm leaf roofing.
To fit the extremely hot and wet climate of the region, Samuel took inspiration from the local traditional architecture. The buildings have tall roofs made of palm leaves with a steep slope which favors water runoff, while the hot air is concentrated at the top of the volume, creating a fresh and airy shade. [4]

The riverine architecture presents technical solutions capable of solving fundamental problems to life in the Amazon rainforest. The replacement of this knowledge by generic formulas is seen as a cultural violence, which eliminates the techniques developed over generations by the local people and changes communities’ way of life. Furthermore, by proposing a space that ignores local conditions, we intensify problems such as buildings’ high energy consumption and misuse of natural resources.
The centenary techniques demonstrate how local materials can be used to respond to regional challenges, such as using the correct wood to build the base of floating buildings. In addition, riverside architecture presents strategies for better adaptation to large floods, which are
increasingly frequent in the region, avoiding human and material losses. The incorporation of knowledge present in vernacular constructions, therefore, would be a measure to avoid urban disasters. Finally, the biggest lesson we learn from traditional architecture is the importance of understanding the particularities of each region where we design. In this way we are able to avoid natural catastrophes, design buildings well suited to local climate, more efficient and that make better use of resources.
It is necessary to rethink the way architects design today. What is proposed is not a romanticized return to a past time, but rather to reflect on how traditional knowledge can be combined with new technologies to develop an architecture better adapted to local conditions. It is necessary to
look at the local history, culture, climate and landscape in order to develop buildings capable of facing the intrinsic challenges of each region.