Home / News / Concrete: Its future in a zero emissions world 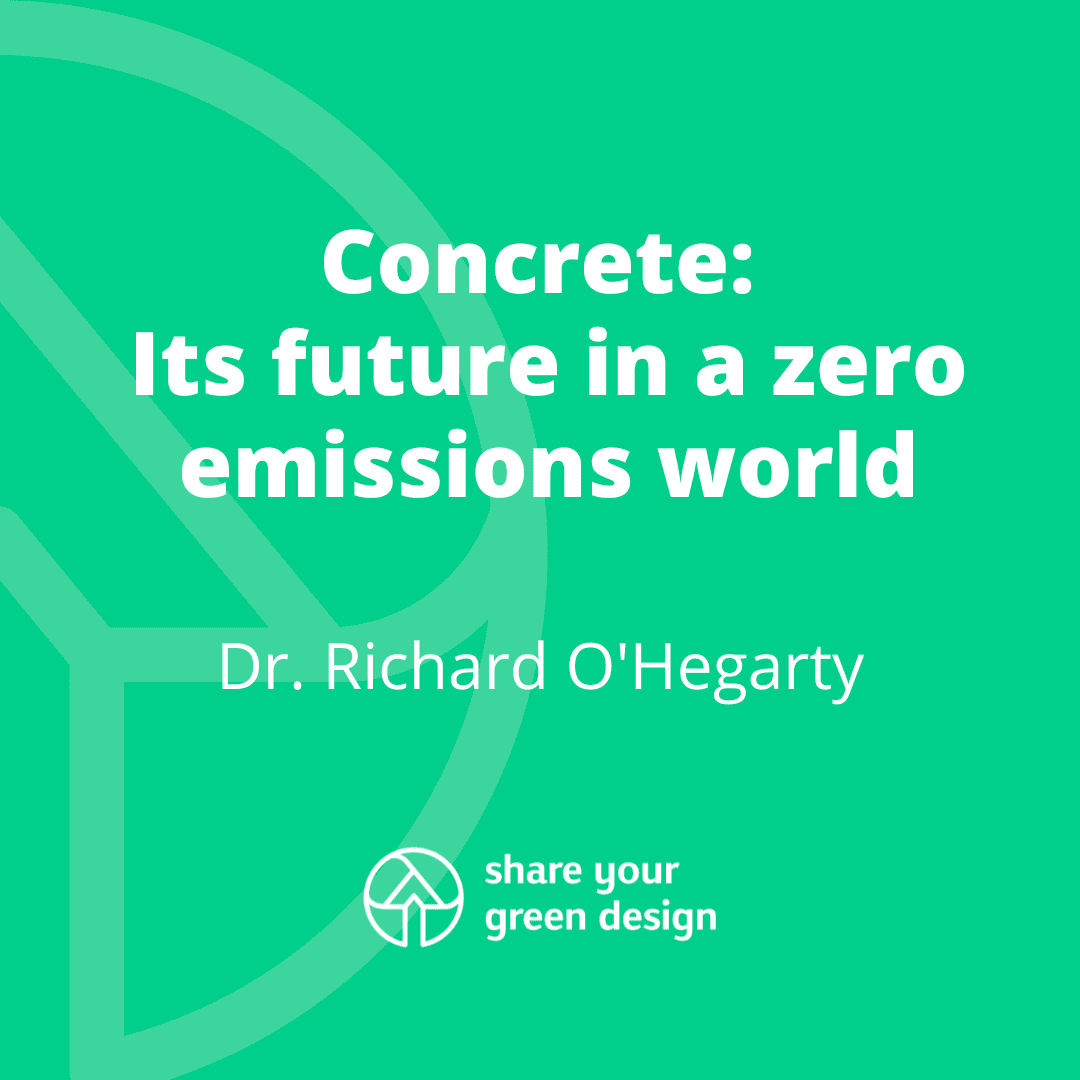 After water, concrete is the most consumed substance on the planet. Anything consumed in such large volumes will inevitably leave a dent on the environment. In fact, it is estimated that 7-8% of global greenhouse gas emissions are associated with the cement and concrete industry. But before we discredit concrete, we should consider why it became so popular in the first place.

Why do we use so much concrete?

Mark Miodownik, a material scientist from University College London, wrote a book called Stuff Matters about the fascinating materials that we use on a daily basis. He titles one of the chapters in this book “Fundamental”. This chapter is about concrete, and that is precisely what concrete is. Concrete was fundamental to the growth of past empires, has been fundamental to the growth of today’s modern world powers and will almost certainly be fundamental to the growth of developing countries. It’s found in the roads and train tracks that connect us together, the water and sewerage systems that plumb our towns and cities and also the foundations of the towers that transport our energy. It’s in the buildings in which we live, work and socialise. Concrete is used everywhere. It does not require highly skilled labour, it’s made from relatively cheap abundant materials and can be moulded into virtually any shape.

Concrete is also incredibly durable. The pantheon was constructed by the Romans almost 2,000 years ago yet still stands strong today. Other construction materials cannot compete with concretes’ longevity. In fact, it is the corrosion of the steel in modern reinforced concrete that determines its design life. The typical design life of steel reinforced concrete is 50-100 years, while concrete alone could last over 1000 years.

The materials concrete is made from are abundant. Cement is primarily made from limestone and the earth’s crust is 15% limestone. The aggregates and sands used in concrete can be made from both crushed rock and natural sands/gravel from glacial deposits or marine/river beds. The latter option is depleting in some parts of the world, but crushed rock is generally plentiful.  The merits of concrete extend far beyond these points. The simple fact that it is so widely used is in itself evidence of its success as a building material.

But here’s the problem:

Concrete’s popularity comes at an environmental cost. Cement, the key ingredient in concrete which glues the pieces of rock and sand in concrete together, is manufactured by burning limestone at extremely high temperatures in a large cylindrical chamber called a kiln. This process results in CO2 emissions from both the chemical change of materials in the kiln and the combustion of the fuel used to reach these temperatures. So it is cement1 rather than concrete which is the primary cause of its environmental impact. In short, we simply cannot continue making concrete the same way as we have done in the past and expect its associated greenhouse gas emissions to reduce.

Ok…but what are the solutions?

It is incredibly unlikely that there will be one single solution that will overcome the carbon intensity associated with the manufacturing of modern day concrete, but rather it will take a collective innovative effort from all groups of people. Research scientists will be required to develop new scalable cement and concrete formulations, engineers will be now tasked with pushing the limitations of structural efficiency to remove redundancy, while policy makers have to enable change through a modernisation of potentially out-dated standards.

The cement we use needs to be manufactured with less clinker. The kilns we use to melt limestone need to be fuelled by low carbon fuels. The concrete elements we design need to be thinner and more efficient than ever and carbon capture and storage needs to be advanced.

A number of research groups (both academic and industry lead) are tackling each individual component in this jigsaw of solutions. To date, many promising individual results have been obtained.

I previously mentioned that cement was the problem rather than concrete. This is true, however it’s only part of the story. The raw material produced from these gigantic cylindrical ovens is called clinker, and the more clinker in a cement blend, the more carbon intensive that cement will be. Most cements are a blend of clinker and other materials including limestone fines, slag and ash. A number of companies are leading the way when it comes to the clinker-substitution route to net zero. Ecocem, for example, are developing scalable ultra-low clinker cements while Wagners, an Australian company, are driving the use of a zero clinker concrete – better known as geopolymer.

The other big emitter of carbon, when it comes to clinker production is the burning of fuel, required to reach the high kiln temperatures. A project lead by the Mineral Products Association (MPA), Hanson UK and funded by the Department for Business, Energy and Industrial Strategy (BEIS) in the UK is working on a solution for just that. And for the first time in history a cement plant has produced clinker from a net zero fuel. Ribblesdale cement plant in the UK, ran a production cycle using hydrogen and bio fuel, proving that emissions could indeed be cut. Economically scaling this will be a challenge but the potential is definitely there.

When it comes to design efficiency, many examples exist. Cheap materials like concrete have historically meant that it was the cost of programming a solution that dictated design – rather than the cost of the material itself. If the cost of finding a solution to a complex structural problem was too great, the cheaper option was to de-optimize the structural design and add more material. Advancements in computers over the past three decades have meant that the software and hardware used to simulate the structural stresses and strains in complex designs have become more accessible and so this is no longer the barrier it once was.

Our built environment is generally created from angular prismatic elements – not because these are structurally optimal but because these shapes are easy to engineer and manufacture. The geometry of our future cities will better represent nature, which, after all, has been developed from a finely tuned algorithm optimised over millennia. A number of research groups are getting closer with these designs.

A UKRI funded research group of engineers, mathematicians and manufacturing experts from Universities of Bath, Cambridge and Dundee have developed a thin shell vaulted floor which uses 75% less concrete than a traditional slab with equivalent strength, thereby reducing the carbon footprint by 60%. While another group of researchers from ETH Zurich have been developing a rib-stiffened funicular flooring system that saves 70% of the concrete, and 90% of the steel reinforcement of a conventional slab.

Removing structural redundancy, reducing clinker consumption and decarbonising the energy used to produce the raw materials of concrete will all play an important role in squeezing carbon out of the industry. However, even in the most positive scenario for the three routes listed above a remainder of carbon will likely be left over, and therefore, a fourth major piece is necessary.

Carbon capture, storage and utilization is a key component in both the Global Cement and Concrete Association (GCCA) and the Cembureau’s roadmaps to carbon neutrality by 2050 for the cement and concrete industry.

Essentially there are, (as the name suggests), three key stages to making this whole process work.

Once captured, the carbon then needs to be transported3 to a site where it will be either stored or used. Carbon can be stored in deep geological rock formations (similar to those formations where we extracted the fuel used in the first place) or could be used as a commodity (carbonated drinks, fire extinguishers, fuel recovery etc). The issue with the former solution (storage) is the cost and potential for leakage. With regard to the second solution (utilisation of carbon) the main challenge is to find something which we use in such large volumes that matches the rate at which we emit carbon. Whatever utilization solution we come up with will have to be used in huge volumes. And what do we use a lot of? Oh yeah….concrete!

Using CO2 in concrete is precisely the route Blue Planet Systems® are taking. They are mixing captured CO2 with water-based solutions to form synthetic limestone which can be used to make concrete. This would make concrete a carbon sink rather than carbon source. So perhaps concrete will be the solution rather than the problem!

The Future of Concrete is…

The challenge of decarbonizing concrete is huge, but the significant increase in awareness has instilled confidence in me.  The sheer volume of concrete consumption means that sometimes small improvements adopted at scale are more impactful than ground-breaking innovations which cannot be scaled. Every innovative effort (big or small) made to remove carbon from concrete should be considered. In my opinion, the future of concrete will involve using a combination of solutions. I don’t know the precise recipe to these solutions, but I do know we are all now looking hard.

This is an exciting time to be working with concrete because there is no choice, the industry either innovates together or gets left behind.