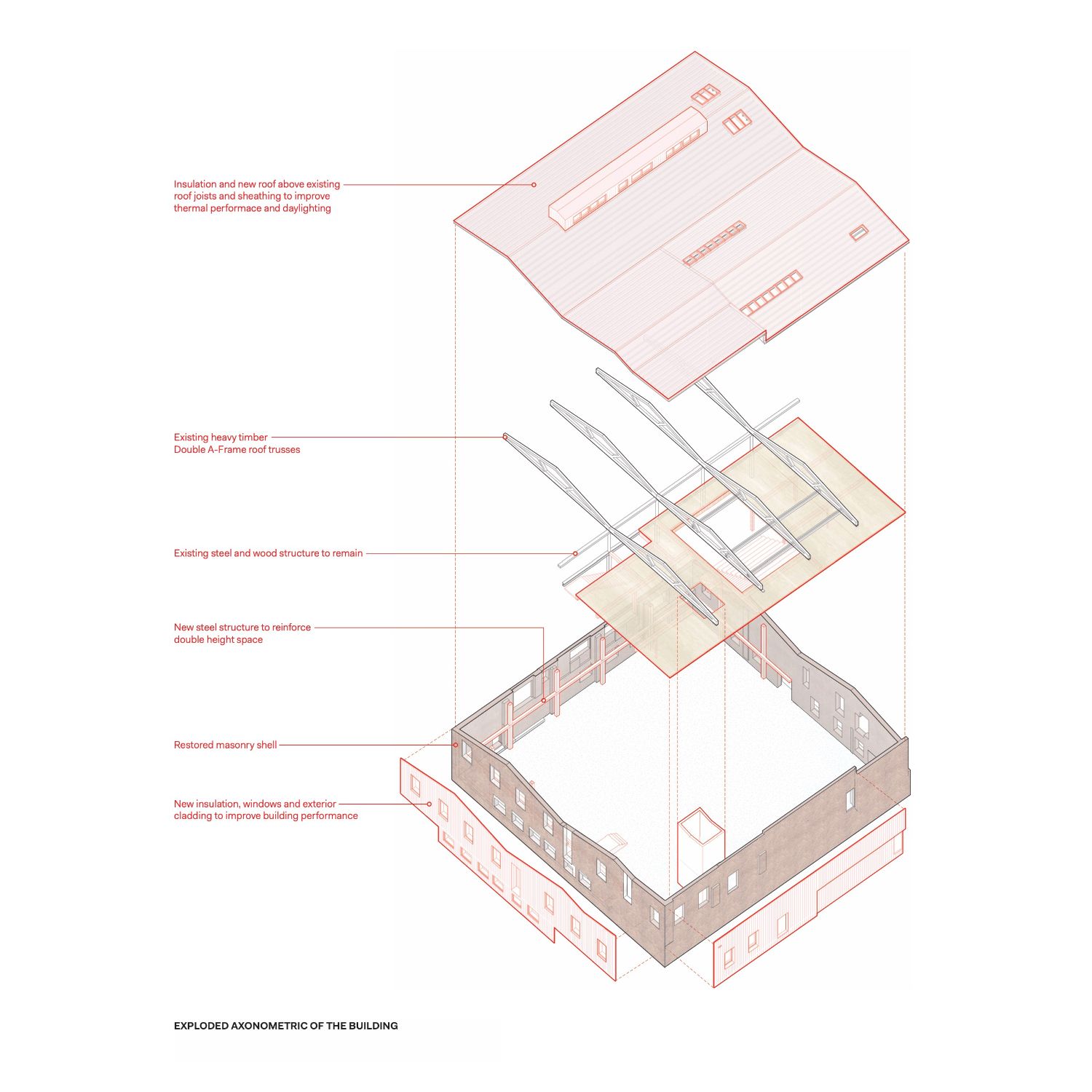 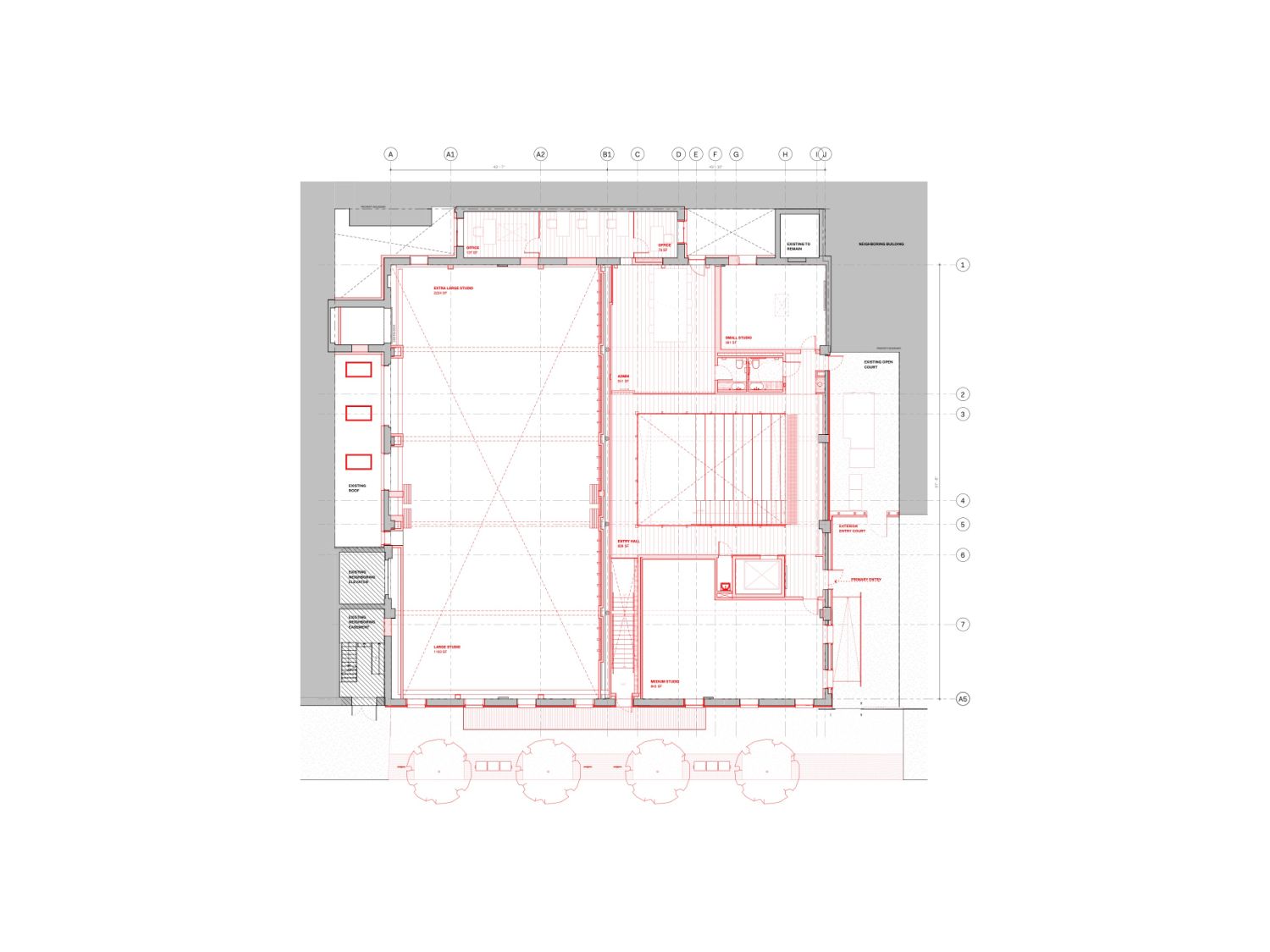 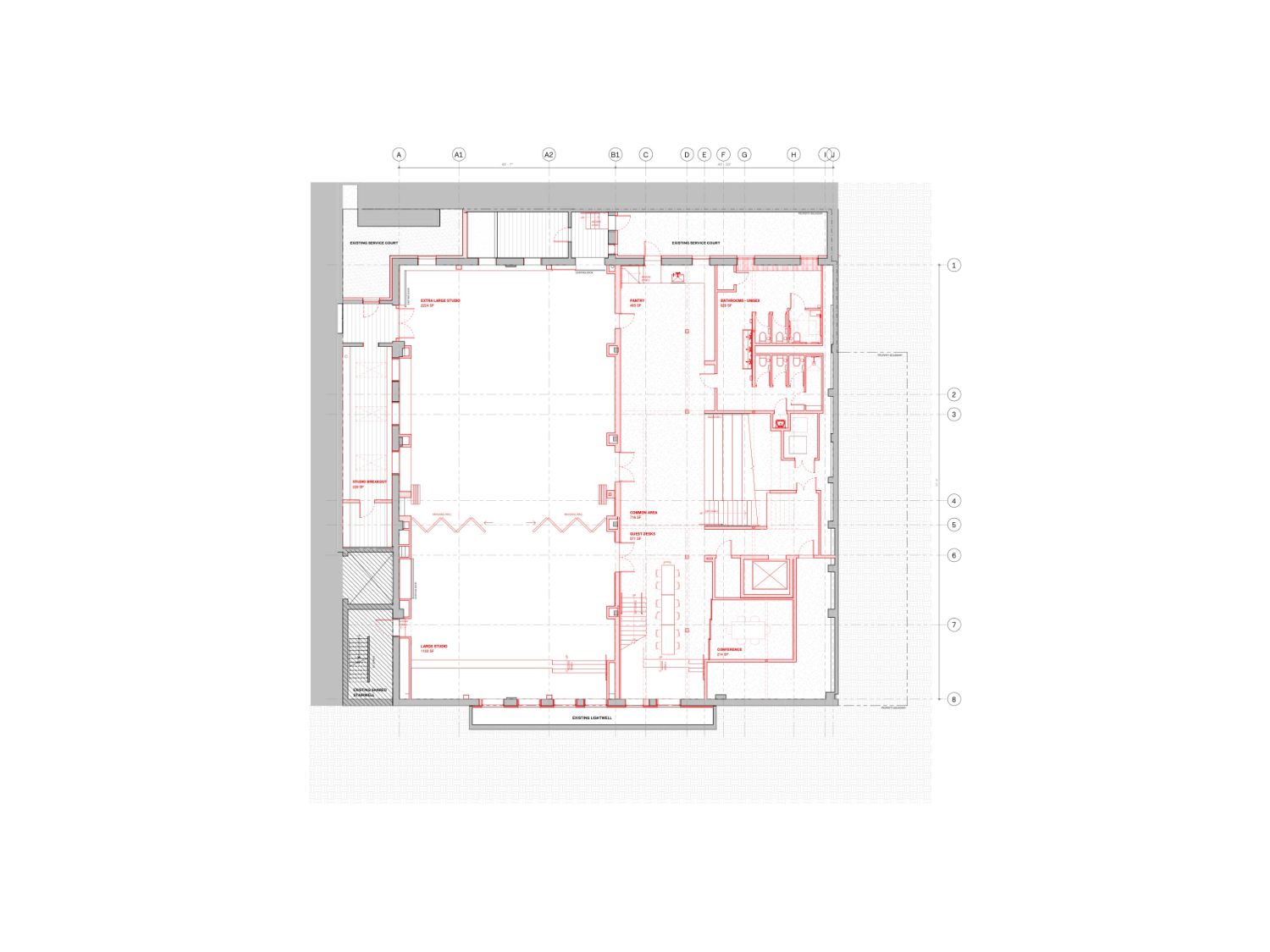 Brooklyn-based architectural practice CO Adaptive Architecture has transformed a 12,700SF former metal foundry, previously used as offices, into The Mercury Store, a new, light-filled developmental space for theater artists. This adaptive reuse project updates and opens the original double A-frame, timber-and-brick building by repurposing removed elements as the basis for new architectural features. Wood is the project’s dominant material: old longleaf pine timber is reconstituted, while new insertions are made from cross-laminated timber (CLT), an innovative product that has a negative carbon footprint, compared to carbon-emitting materials like steel and concrete, therefore meeting CO Adaptive’s low-carbon design commitment. The project represents the first use of CLT on a fully commercial building in New York City.

“This is the first project in New York City to use mass timber to transform an adaptive reuse building, and we hope it will lead by example; exemplifying the capacity of mass timber to simultaneously reduce our embodied carbon and reinvigorate our aging building stock,” says CO Adaptive co-principal Ruth Mandl.

CO Adaptive began the project soon after the client, The Mercury Store, purchased the building in 2017. Dating to 1902 and located in Brooklyn’s Gowanus Canal district, it had three previous lives: First, as the Royal Metal Furniture Company foundry; next, as a warehouse and storage facility; and, just prior to this renovation, as highly compartmentalized art studios and office space. Historically home to heavy industry, Gowanus is currently undergoing a vigorous transformation catalyzed by remediation efforts and substantial rezoning that allows for denser residential, commercial, and cultural sites.

“Within the context of this evolving neighborhood, our clients engaged us to design a space for creative expression through the sensitive transformation of a century-old building that recalls the community’s past,” says CO Adaptive co-principal Bobby Johnston.

With this, CO Adaptive set out to restore the character of the heavy timber building, exposing and honoring its substantial wood trusses and reinforcing the double A-frame, while also adapting the building to meet the new program. After years as an industrial and studio space, the building interior was highly compartmentalized and repairs were neglected. In response, the architects transformed it into an interconnected, spacious, and flexible environment for theater rehearsals and performances.

“The new space has really fired people’s imaginations. It’s a beautiful, practical, intentional space and it inspires, I hope, the artists to respond in the exact same way,” says Will Frears, Director of The Mercury Store.

New aluminum exterior cladding blends in with the industrial neighborhood, while a new, unobtrusive entrance was carved in from the side alley, rather than the street-facing front. Additionally, new exterior insulation was applied to allow interior exposure of existing brick walls, heavy timber trusses, and roof joists—all rich with decades of industrial patina—therefore reducing the need for additional interior materials and finishes. “Insulating the building from the exterior allowed us to expose the existing materials’ warmth, texture, and history of use; we even left intact the construction spray paint annotations on the exposed brick walls,” says Mandl. “This decision also reduced the need for interior finishes—like drywall and paint—that a project of this scale would typically require.”

Across the interior, previously subdivided spaces were opened up and existing windows, skylights, and clerestory were replaced or restored, permitting sunlight to penetrate all corners of the large square footprint. In an essential gesture, the existing ground floor of one half of the building was removed to create a lofty, double-height assembly space for theatrical rehearsals and performances. Exposed brick bookends this area, while substantial floor-to-ceiling accordion doors fold unobtrusively into one side at the room’s center, available to bifurcate the space as needed. Responding to the project’s low-lying site and potential flood events, new demountable, sprung-wood flooring was installed across the main performance space, which lies a story below grade. Designed collaboratively with Broadway set company Hudson Scenic, the system can be disassembled and relocated to higher ground by lifting the finish layer to access a puzzle of removable 3-by-6-foot panels.

“Because of the type of movement-dance, performance—happening in that space, it was important for the system to be a proper sprung-wood floor. The client wanted the warmth of real wood, but also wanted to avoid replacing it in the case of a big flood event,” explains Mandl.

On the other half of the building, new bleachers provide a central gathering and circulation zone that connects the main assembly space and breakout rooms to the upper level, where two additional smaller studios and an administrative area complete the program. Here, a new CLT floor structure with Glulam columns and girders replaced existing joists and subfloor, allowing for large column spans, an open layout, and the existing heavy timber trusses to remain unaltered and exposed. Removed wood joists were reinserted as railing posts framing the bleacher opening, and an orange metal door, repurposed from a different area of the original building, hangs from a new track separating the administrative offices from the main entry and circulation space. Above, two new skylights punch into the roof and create floods of natural light.

Overall, the project exemplifies CO Adaptive’s commitment to low-carbon design thinking in three major ways. First, in the evolution of existing building stock to support an innovative new use, simultaneously reducing demolition waste and engaging with the history of the site. Second, in leveraging low-carbon alternatives to standard construction practices, with the application of CLT, in the required structural insertions. Finally, in repurposing removed building materials to create architectural features, while minimizing the use of virgin materials.

“Care is taken to re-appropriate, rather than erase, the building’s historic materials and character,” says Johnston. “The project therefore not only reuses the building, but reduces demolition waste by reclaiming integral materials throughout the design, thereby minimizing its carbon footprint.”

Link to the project on the architect / engineer website: https://coadaptive.co/E131