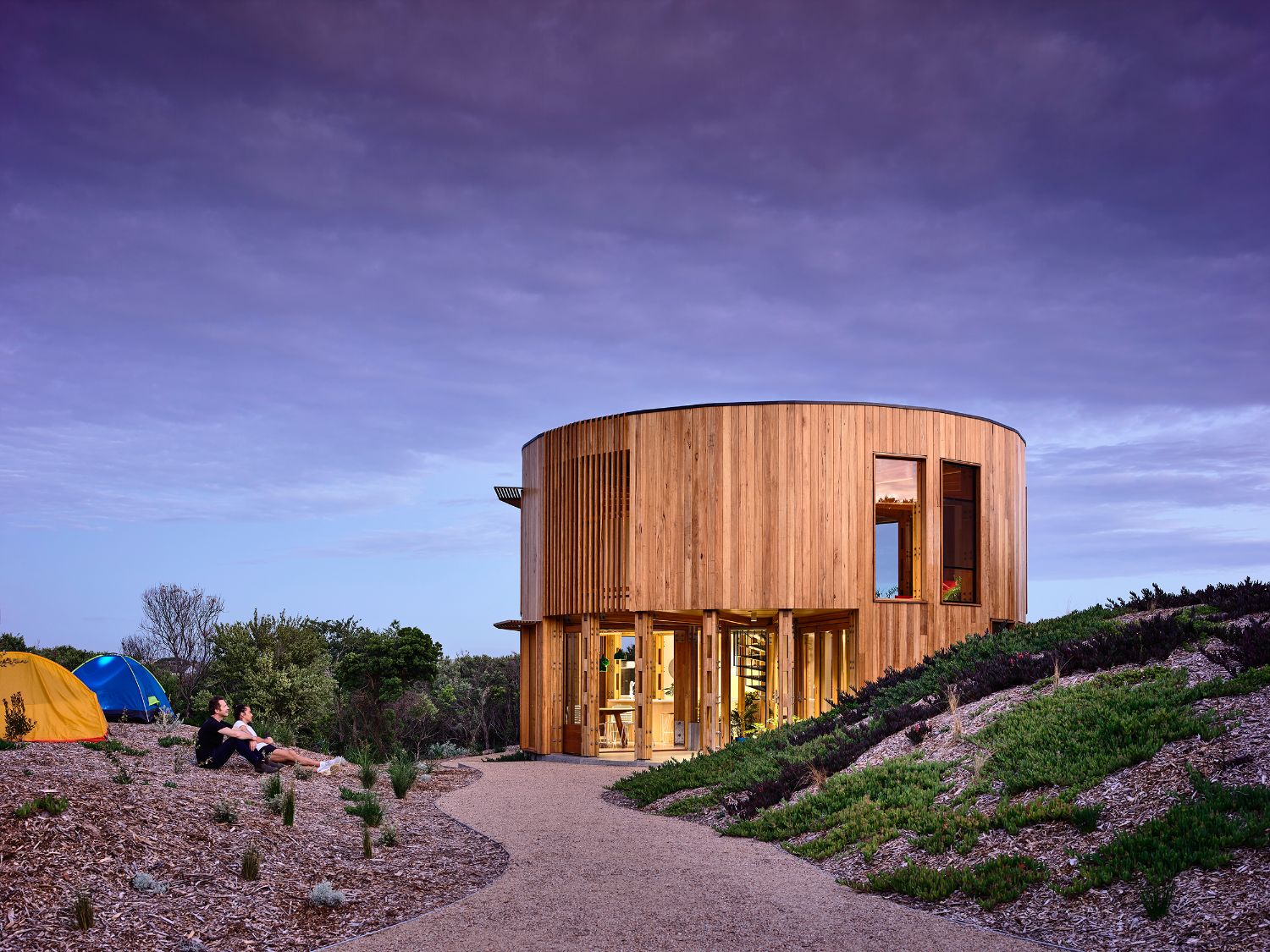 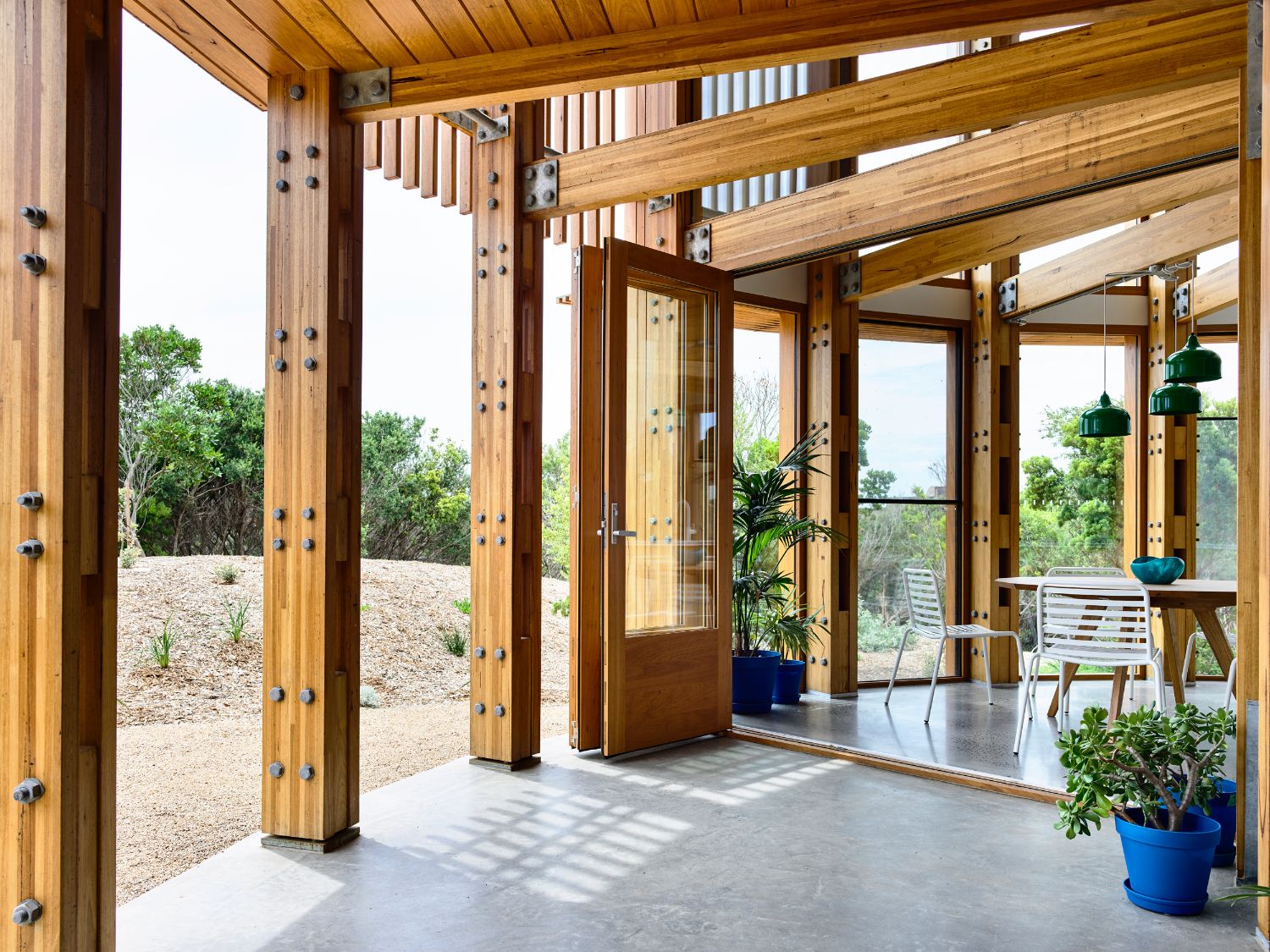 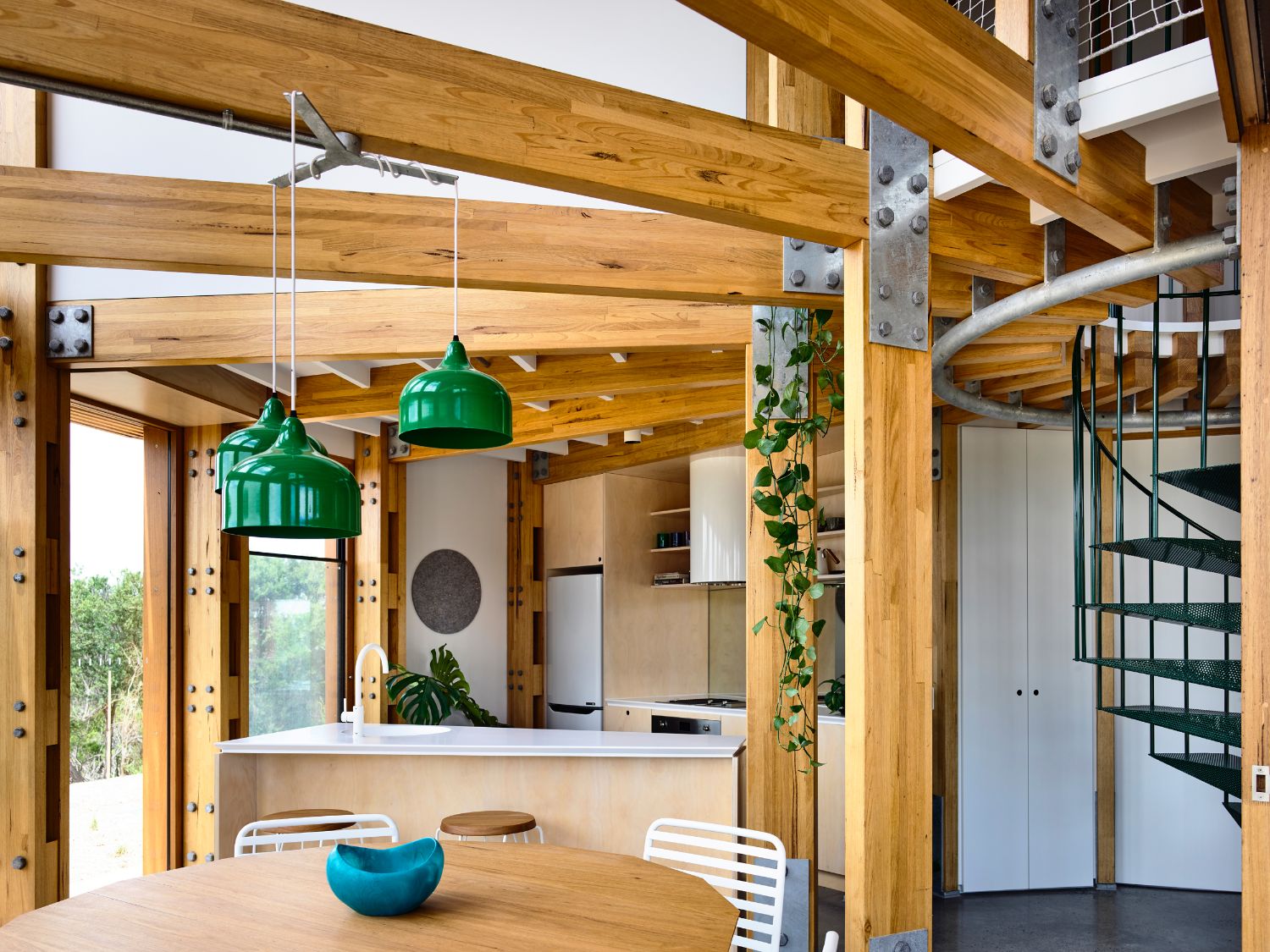 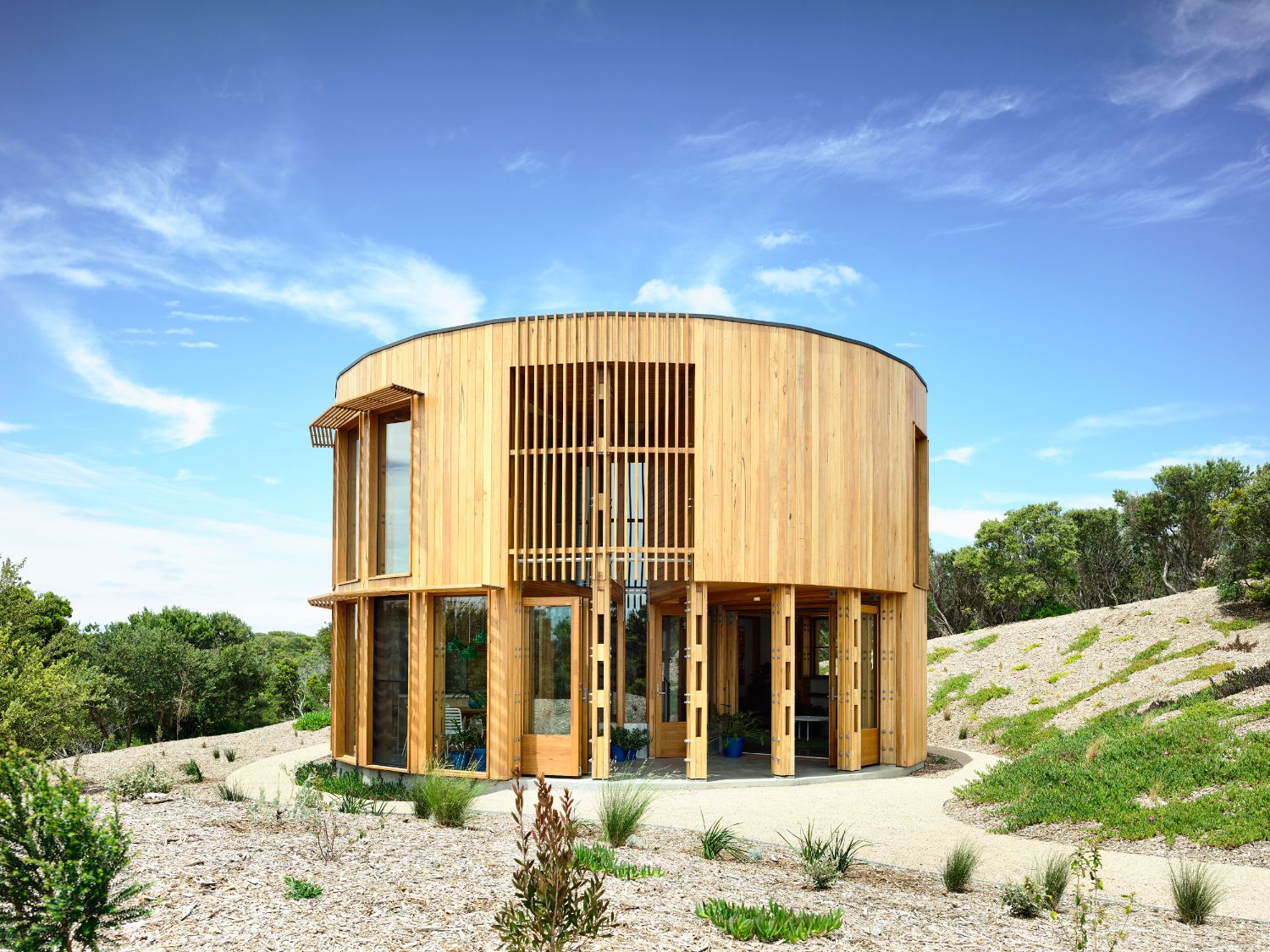 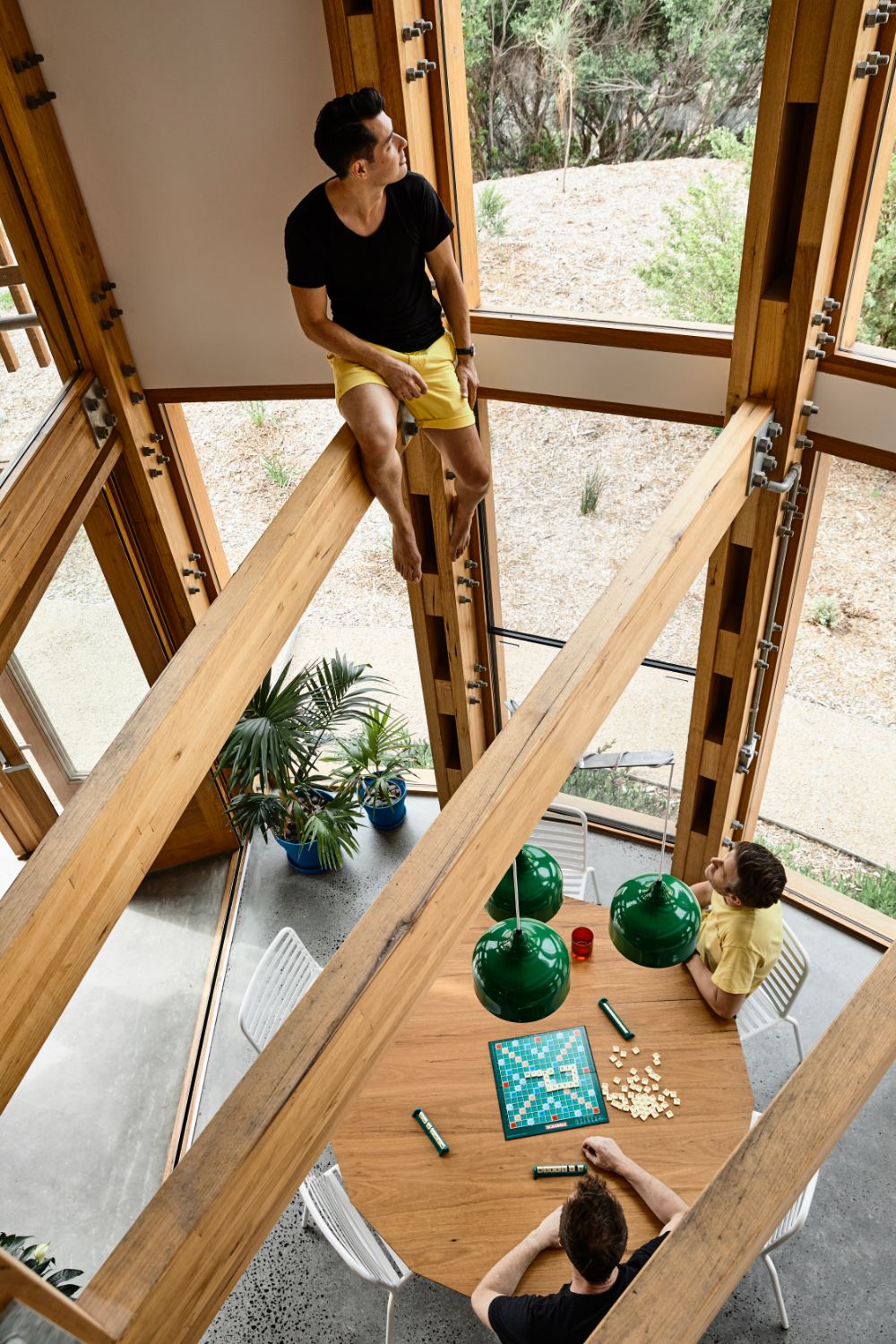 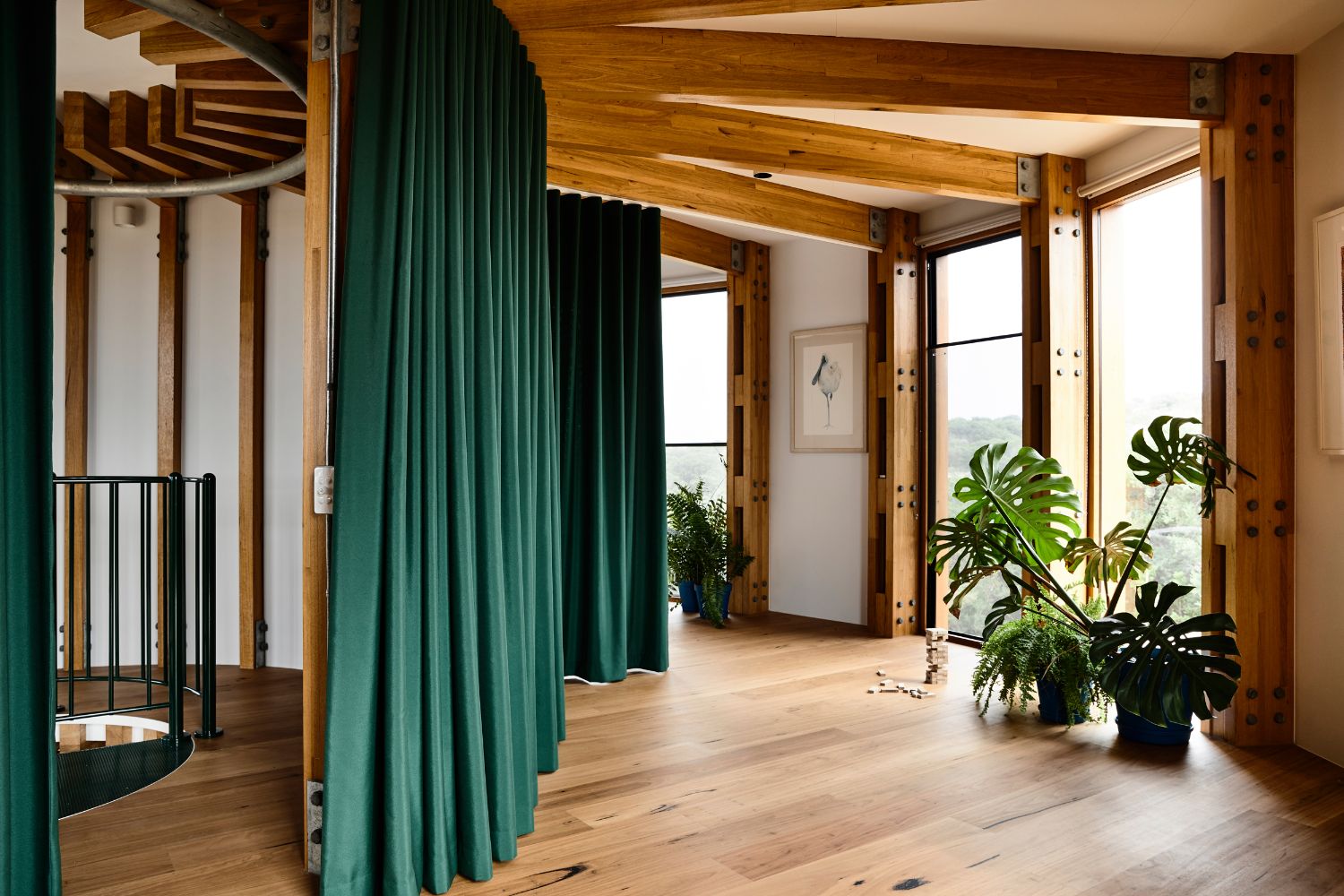 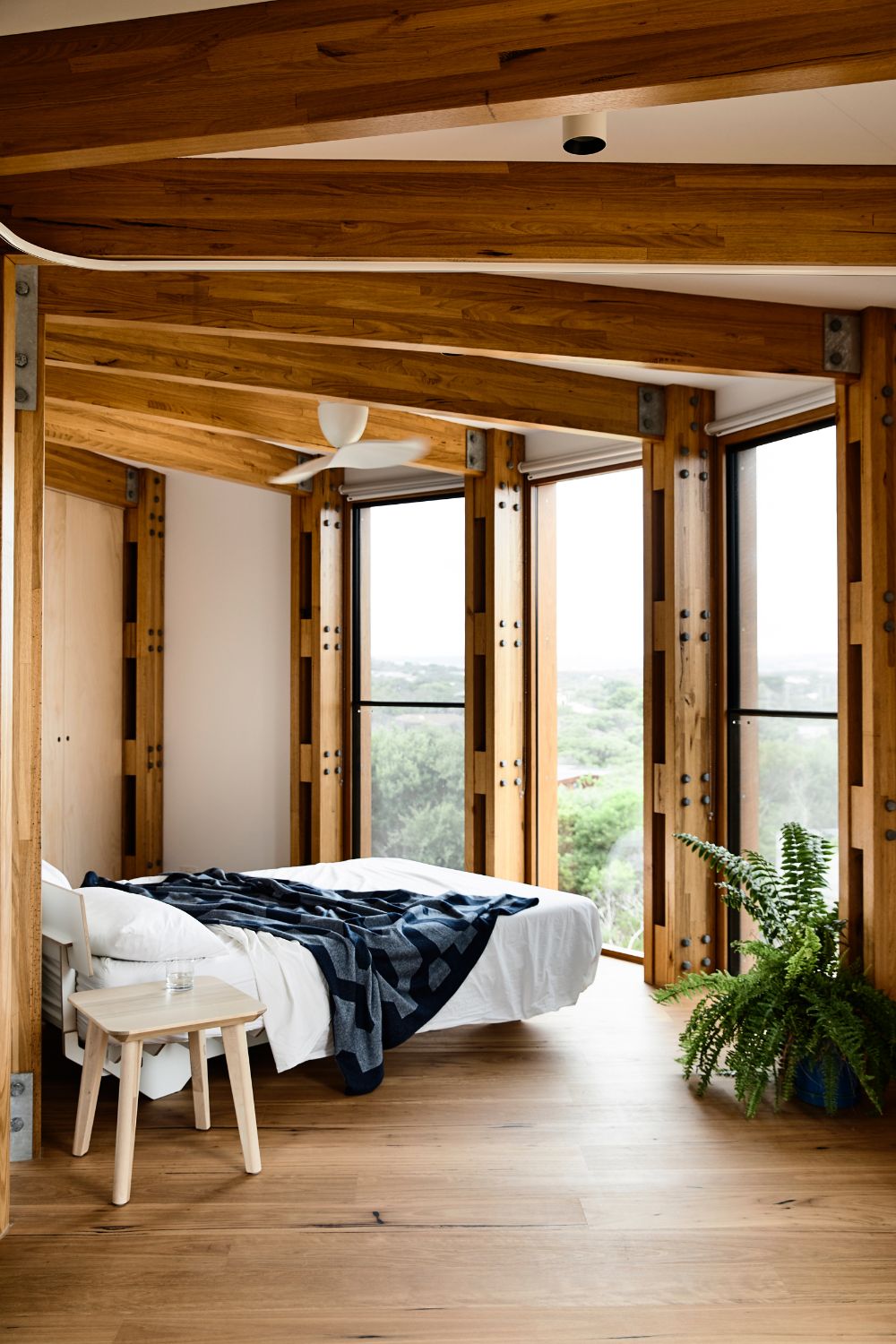 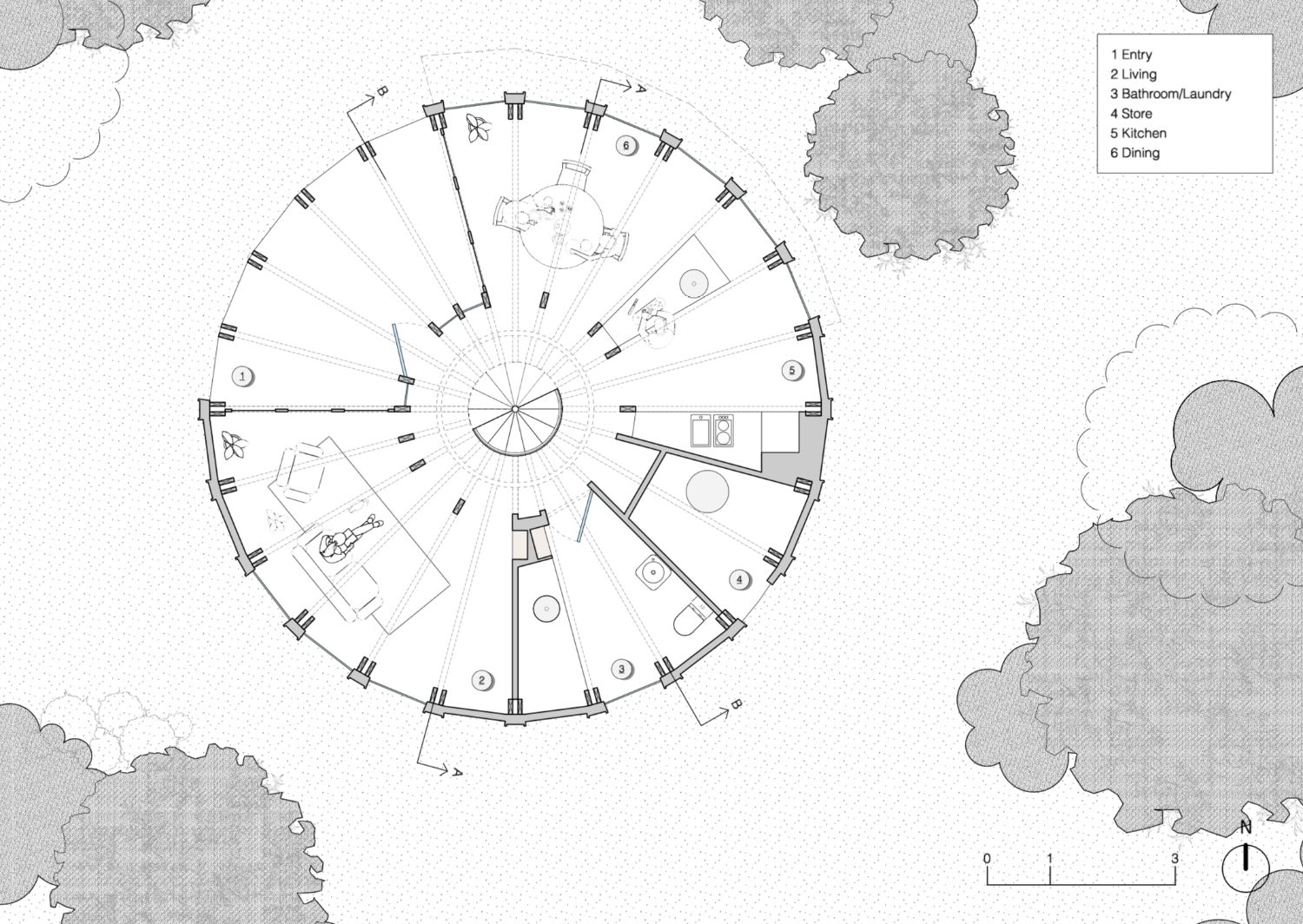 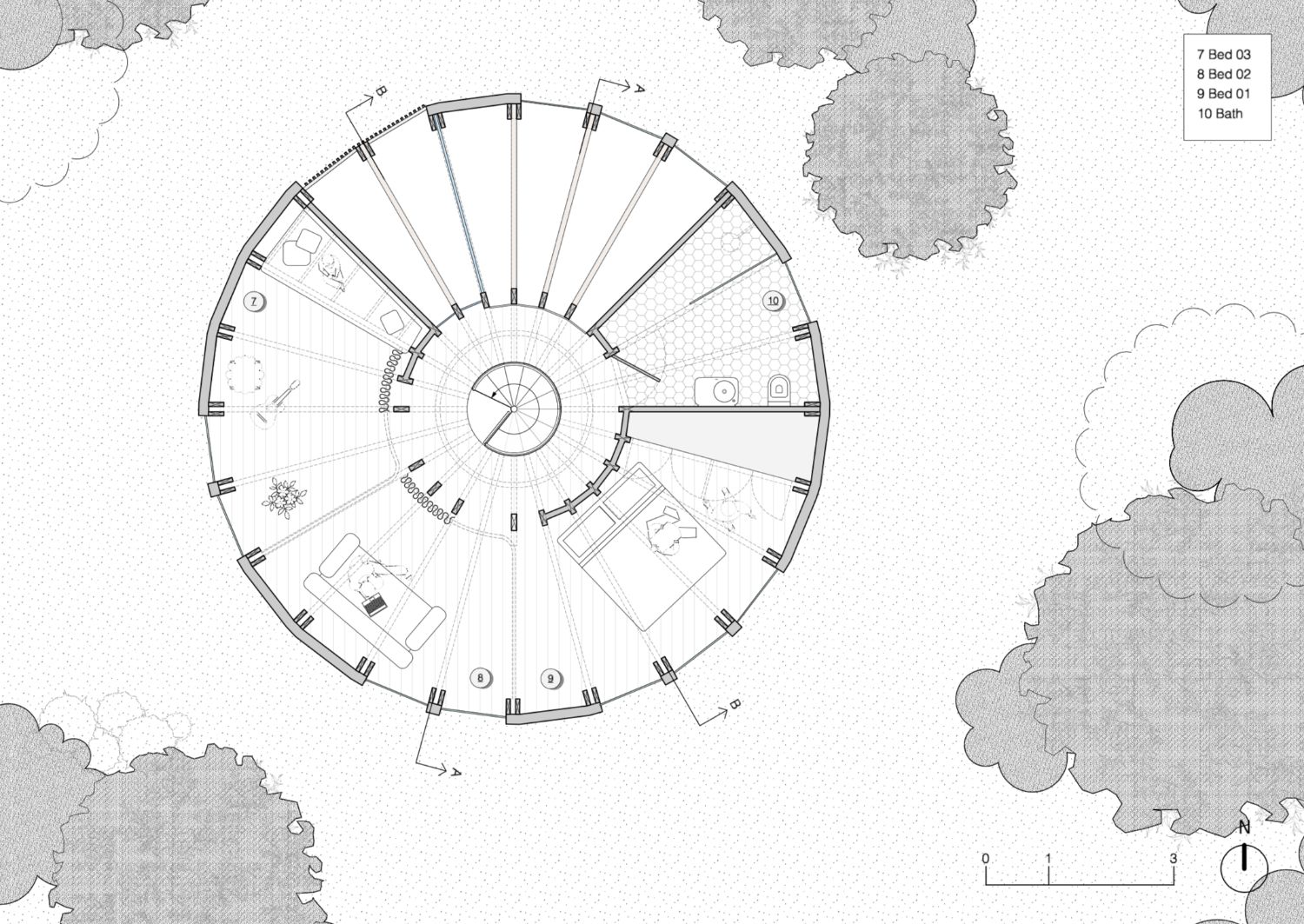 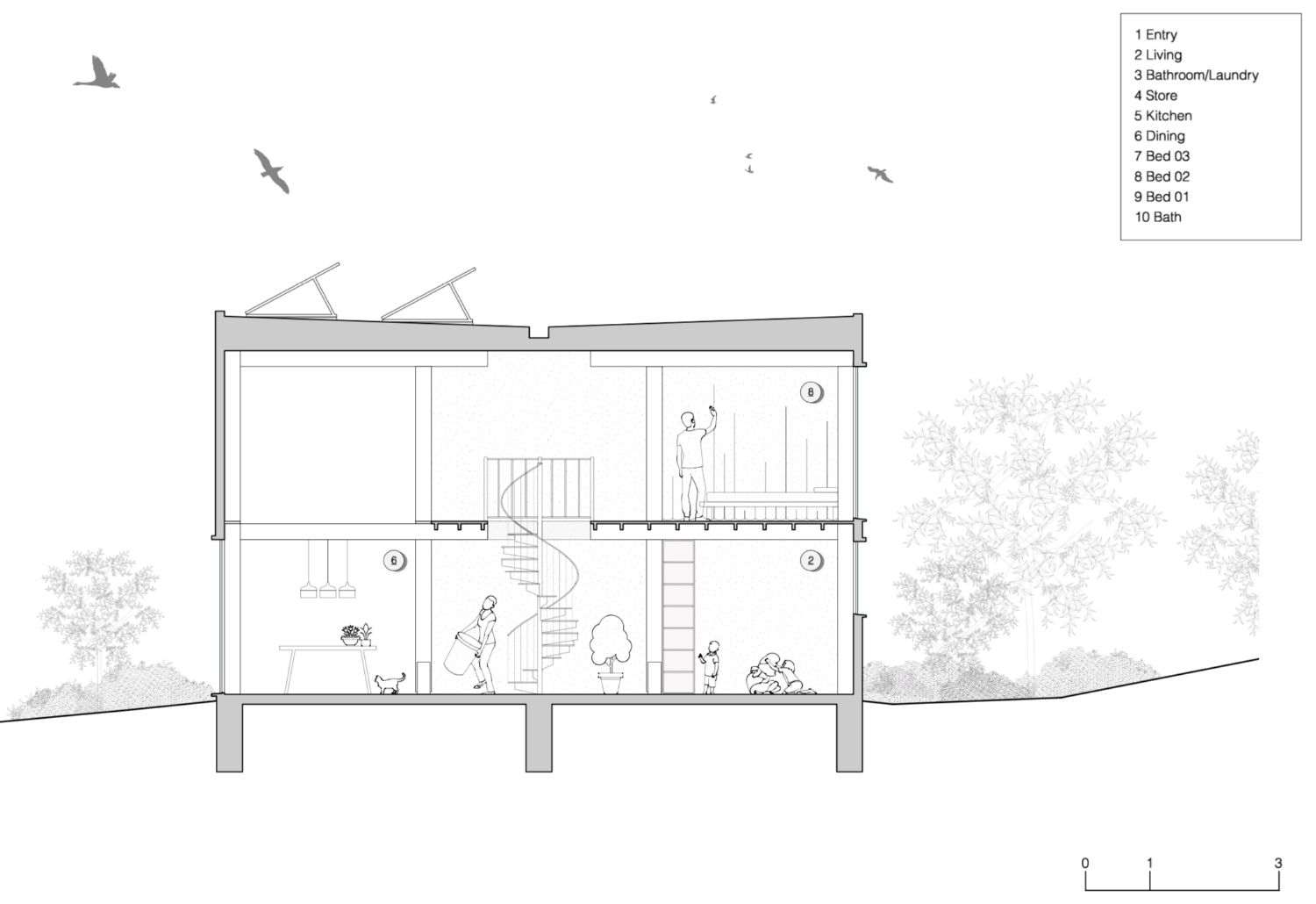 Less than five meters in radius, St Andrews Beach House is an object in the landscape. A Euclidean form set amongst the rough and sandy terrain it provides – in modest form – everything you would need and want in a beach shack.

Australians have some of the biggest houses in the world and holiday houses are increasingly becoming carbon copies of the suburban home.  The owner of St Andrews Beach House recognised this. He challenged us to design him a ‘bach’ – a New Zealand word used to describe a very modest, small and basic shack, or shed.

Located on Victoria’s Mornington Peninsula, St Andrews Beach has no shopping strip and no restaurants. There’s a corner store, a brewery, and not much else. What it does offer is serenity and seclusion, a wildly beautiful coastline, and some of the most celebrated residential architecture in Australia. The owner was fortunate enough to own land abutting national parkland, close to the foreshore and directly within the sand dunes.

St Andrews Beach House is a two storey circular holiday home that takes advantage of the remoteness of site and expansive views, which extend in all directions. The house stands alone, amongst wild bush, rugged sand dunes and scrub. The location is fragile and the house respectfully integrates into the environment. With no neighboring forms to respond to, the brief – to design a modest, two-bedroom beach house, was freely imagined.

The shape of the house grew from a response to the views and the simplification of the interior spaces. At St Andrews Beach House there are no corridors. Corridors and circulation space are, in our view, a waste. A corridor free home lends itself to a circular design.

To the beach and bach

Beach houses exist for simple relaxation, an escape from the city, for quietude and downtime with family and friends. It should provide contrast from day-to-day normality, be super low maintenance, relatively self-sustaining and basic, but not without simple creature comforts.

Australians have some of the biggest houses in the world and, increasingly so, Australian  holiday houses are becoming carbon copies of the suburban home. Simple shacks are replaced with oversized structures that are all too literally a-home-away-from-home. The owner of St Andrews Beach House recognised this. In his brief he would frequently use the term ‘bach’ –  a word used in New Zealand to describe the rough and ready beach shacks built mostly in the mid century from found and recycled materials. Regardless of how much money you’ve made, you get yourself a bach, and that bach has to be the most basic, down-to-earth thing. The owner challenged us to design and build him a ‘bach’ in the dunes.

A circle in the sand

Less than five meters in radius, St Andrews Beach House is an object in the landscape. A Euclidean form set amongst the rough terrain. The plan of the house is generated using the rational and precise geometry, as the circle extrudes into a tube. The internal spaces are generated by a tightly controlled plan adhering to the rules of form, guiding and arranging segments that divide the space, with a spiral staircase as its central core, providing light and air but also snug spaces. The house displays an innovative use of timber, with chunky details and exposed portal frames. This is not a slick beach house, but a relaxed and informal escape, designed with materials that will patina and weather, like an old coastal wharf.

The house has multiple outlooks. Without a dominant orientation there is no need for a front, back and sides, St Andrew Beach House is all front. The ground floor comprises of kitchen, living and dining, with a bathroom and a laundry. An open deck area, within the tube, unites the spaces when the bi-fold doors are opened. Most Australians want a deck or veranda,  instead of adding something to the outside, like that of the classic old Australian home, at St Andrews Beach House the deck has been eroded out of the form itself, creating a two story space that’s both outside and inside.

Wherever I lay my head, that´s my bed

A central spiral staircase leads upstairs to the bathroom and bedroom zone. Unlike a traditional bedroom layout, the upstairs sleeping area is essentially one bunk room, separated by curtains. (The space can also function as a second living or games room.) Rather than design a series of sealed bedrooms, each with ensuite and walk-in-robe, the sleeping zone at St Andrews Beach House is informal, casual and relaxed, where floor space is the only limitation. And when that limitation is reached, guests are invited to pitch a tent on the soft sand outside and use the house as a central hub.

A single cylinder concrete water tank acts as a gateway marker to the beach house, from here onwards you leave cars, the road, your troubles and everything else behind. Though the building is precise, following the rigid geometry of a circle, staying here provides a complete escape from regular life. Not adhering to a typical layout allows you, if not forces you, to live differently. With a standard home arrangement (a long corridor, with rooms leading off etc) everyone knows how to use the spaces, a circular home with strong open connections horizontally and diagonally throughout, serves to both engage and liberate.

St Andrews Beach House stands at less than five meters in radius, creating a very small footprint amongst the dunes. Like all of Austin Maynard Architects buildings, sustainability is at the core of this project. The materials used are robust and designed to weather. Passive solar principals are maximized by the design. All windows are double-glazed. Solar panels with micro-inverters cover the roof providing electric hydronic- no fossil fuels, no gas. A large cylinder concrete water tank collects rainwater, captured and reused to flush toilets and water the garden.

The block had been previously cleared and connected to the road for services. Construction was difficult as shifting sands required deep footings. Landscaping and retaining the existing fauna was especially important to minimize sand blasting caused by wind.

Link to the project on the architect / engineer website: https://maynardarchitects.com/#/standrews/