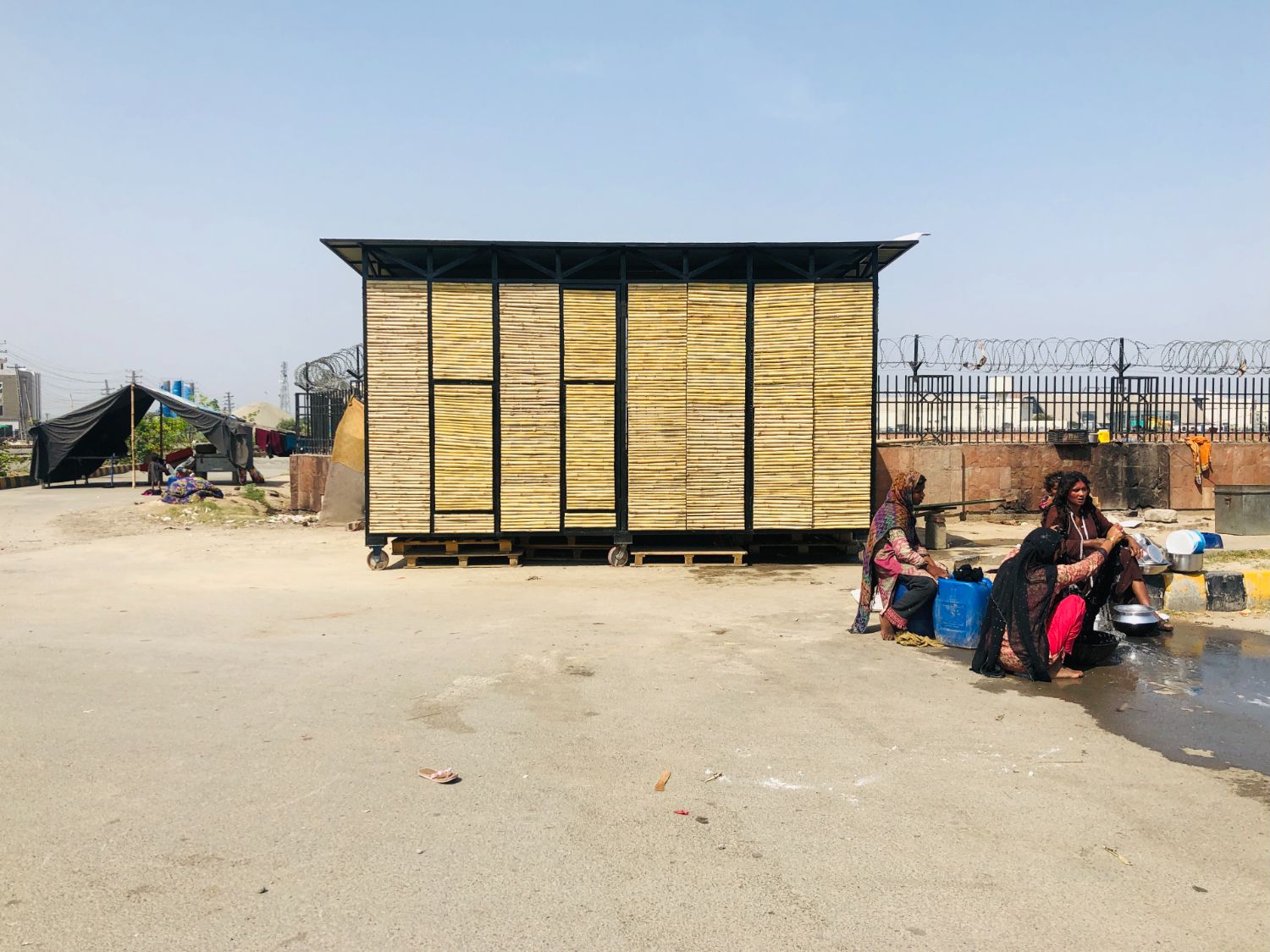 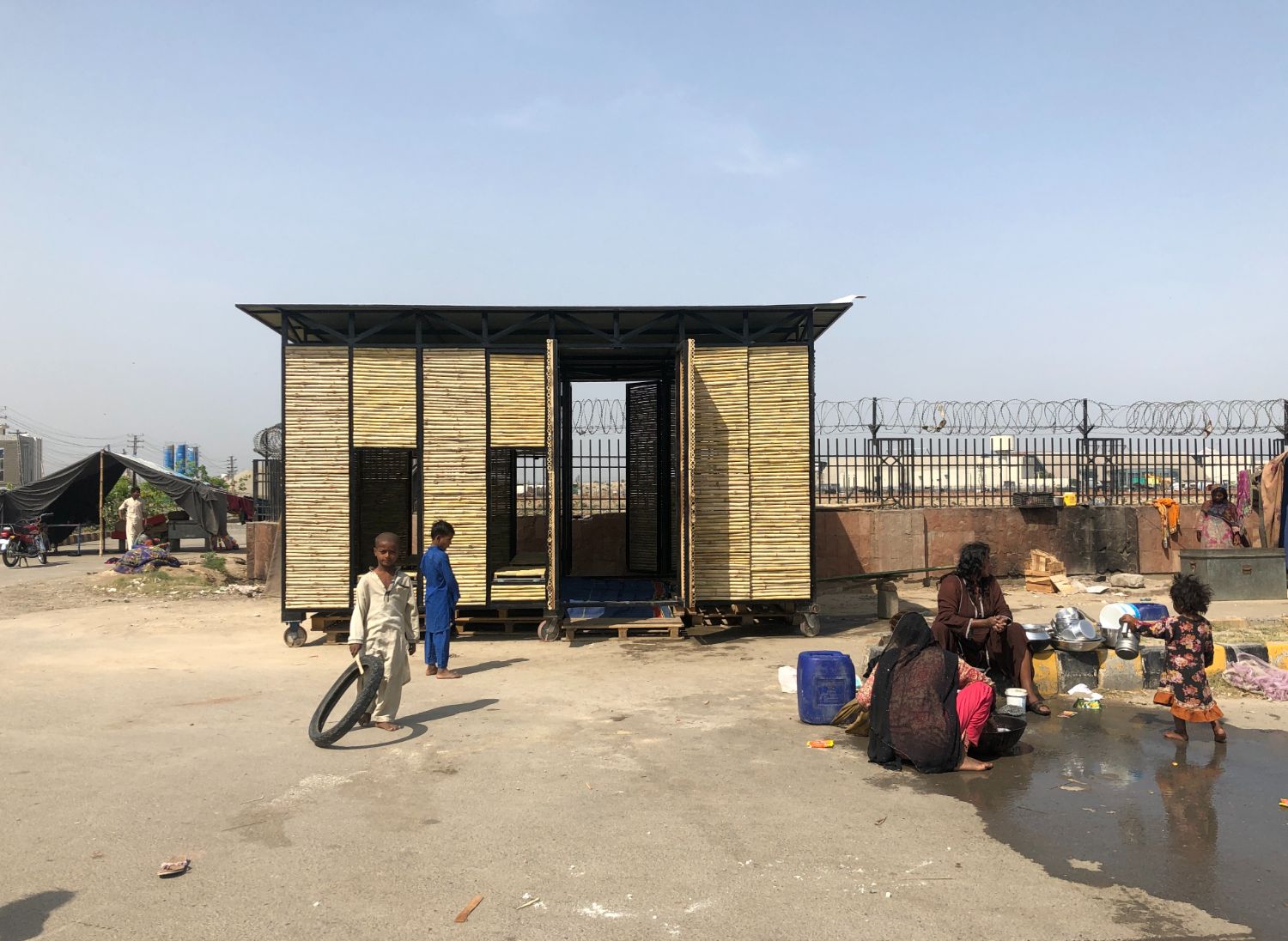 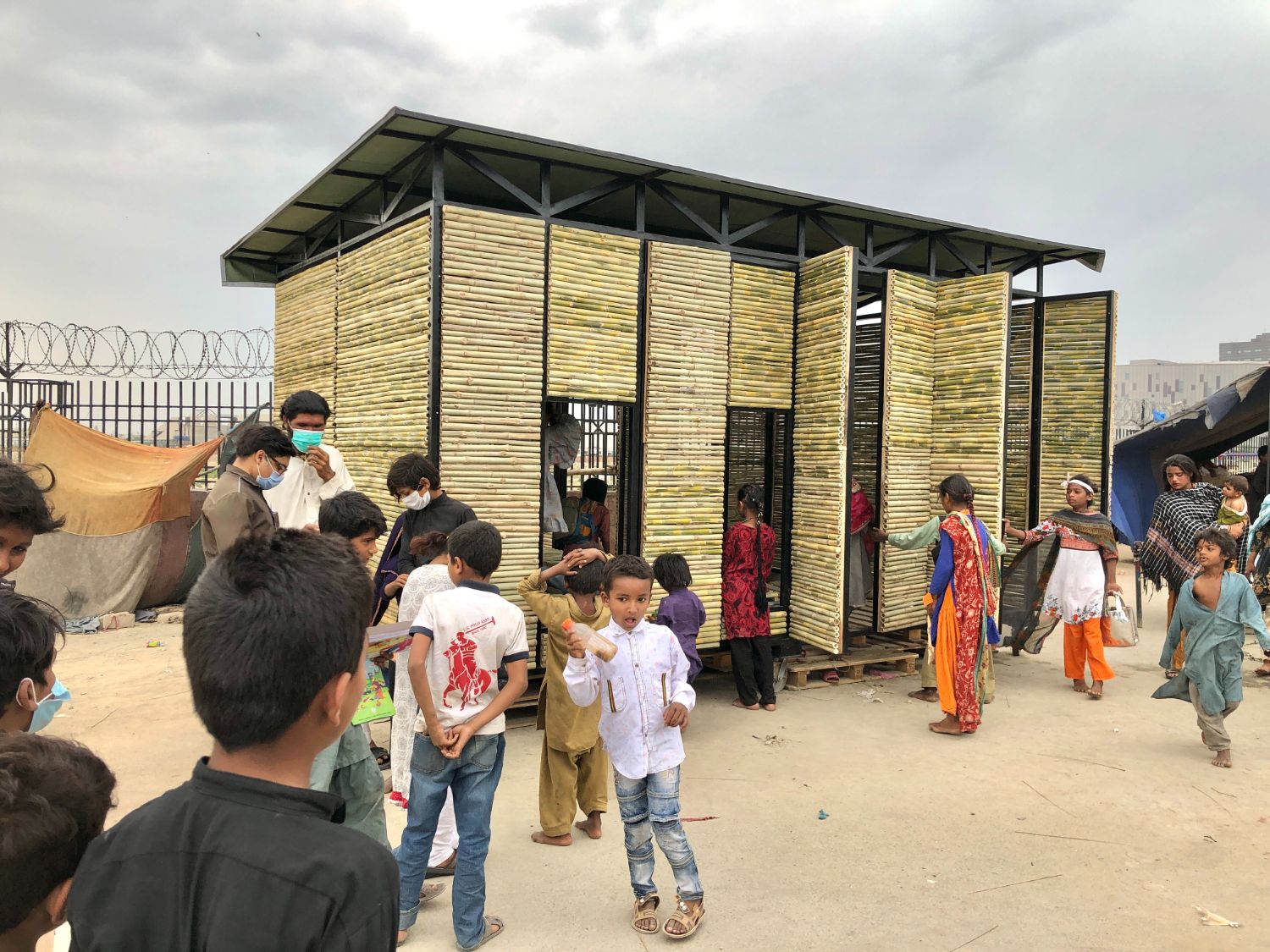 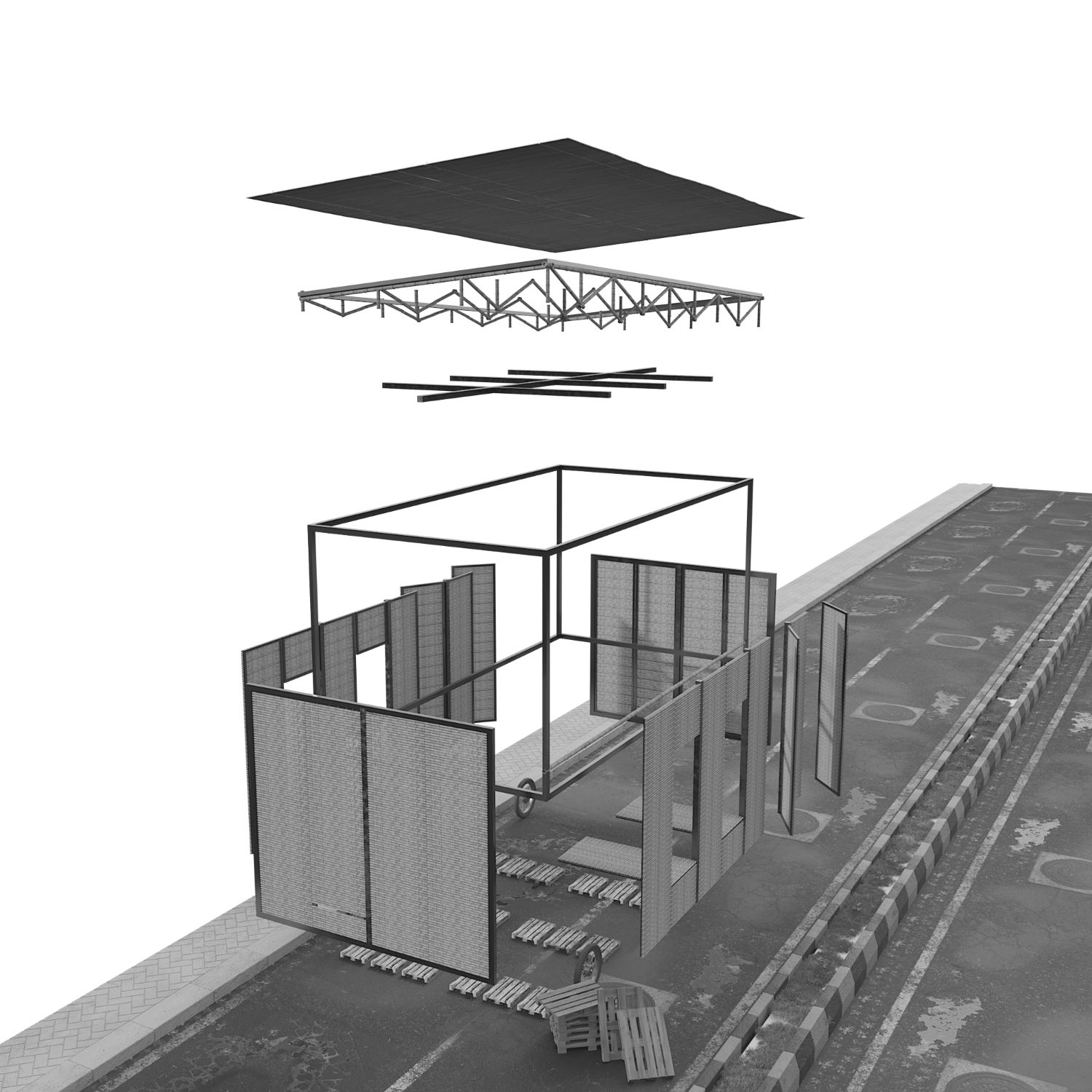 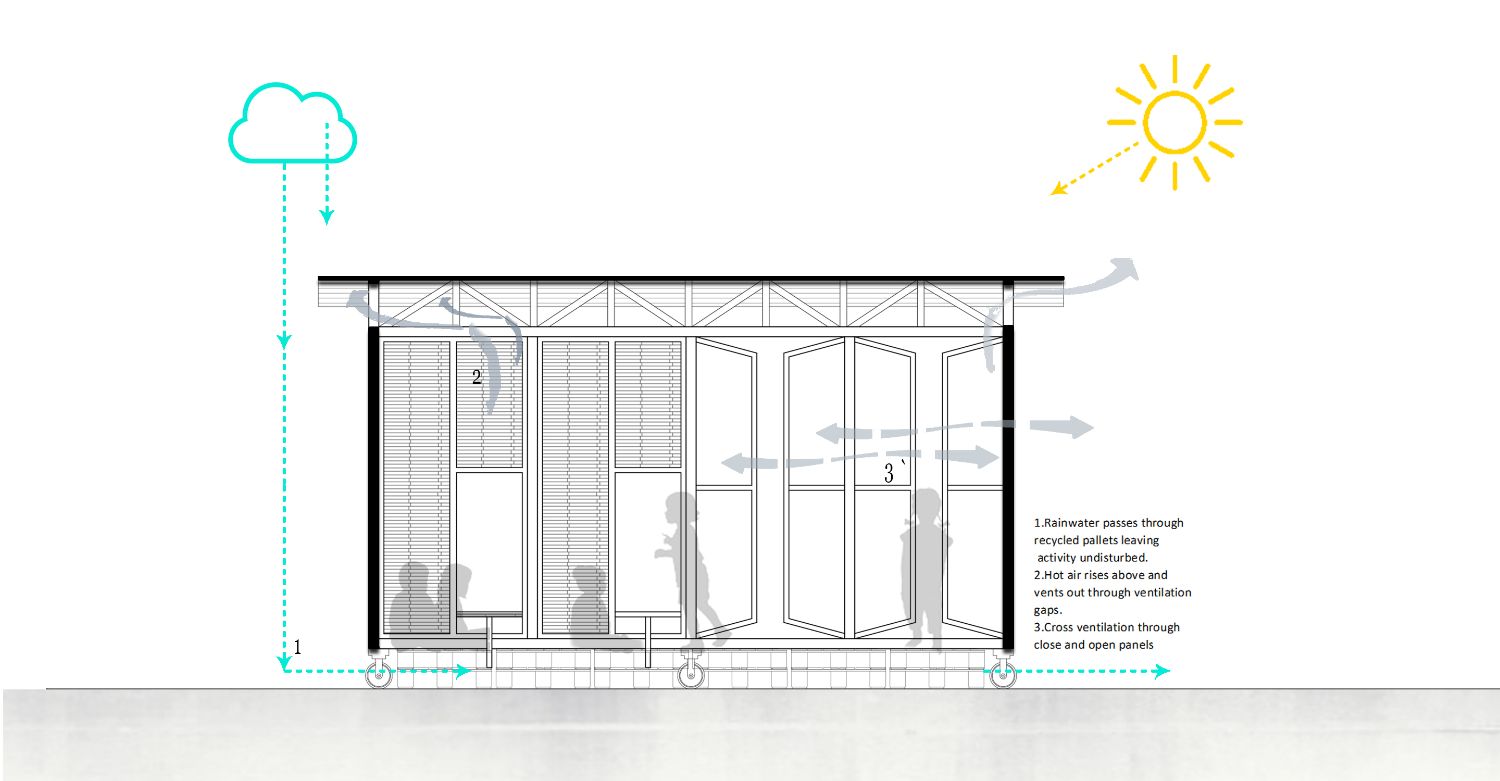 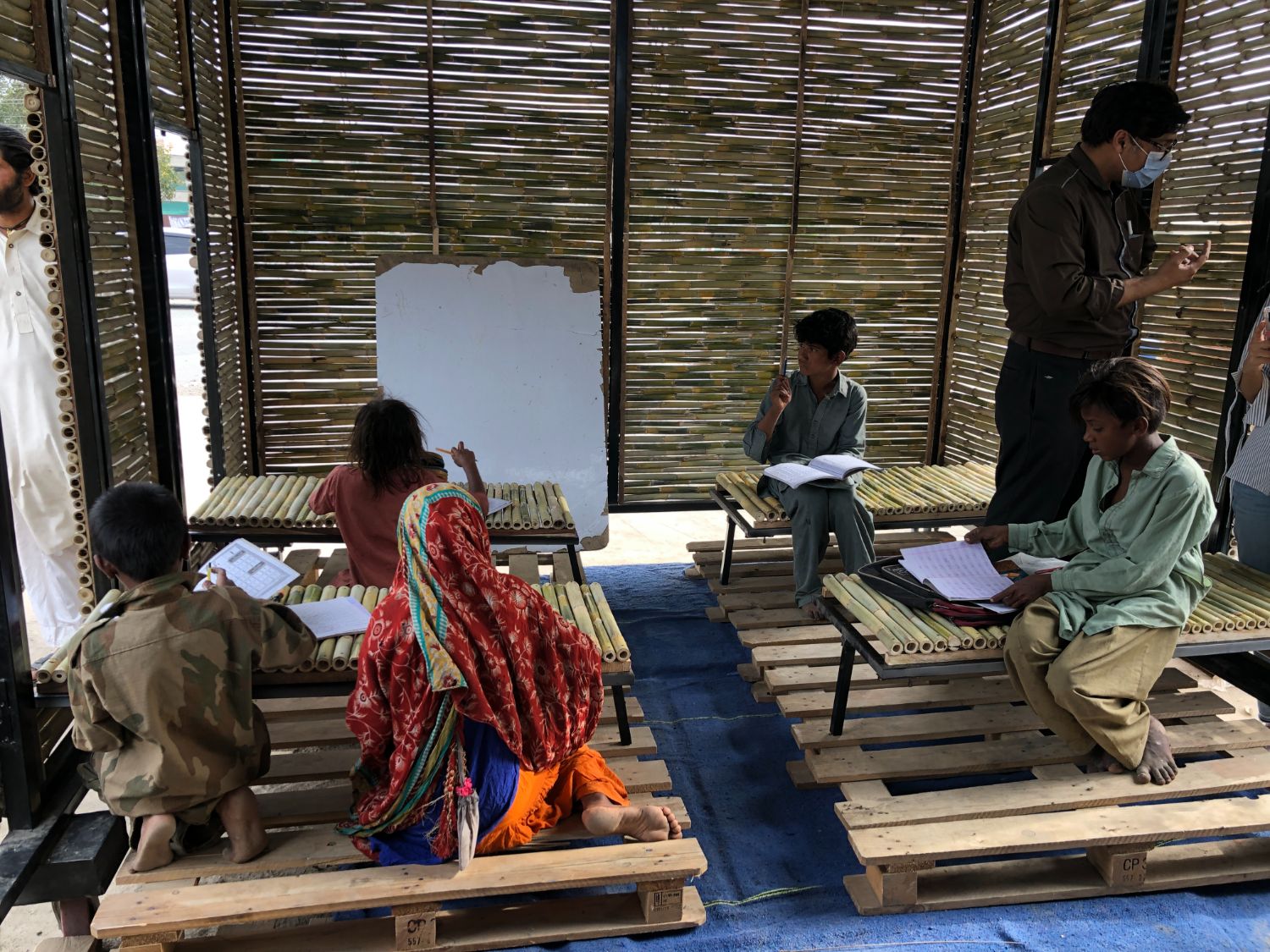 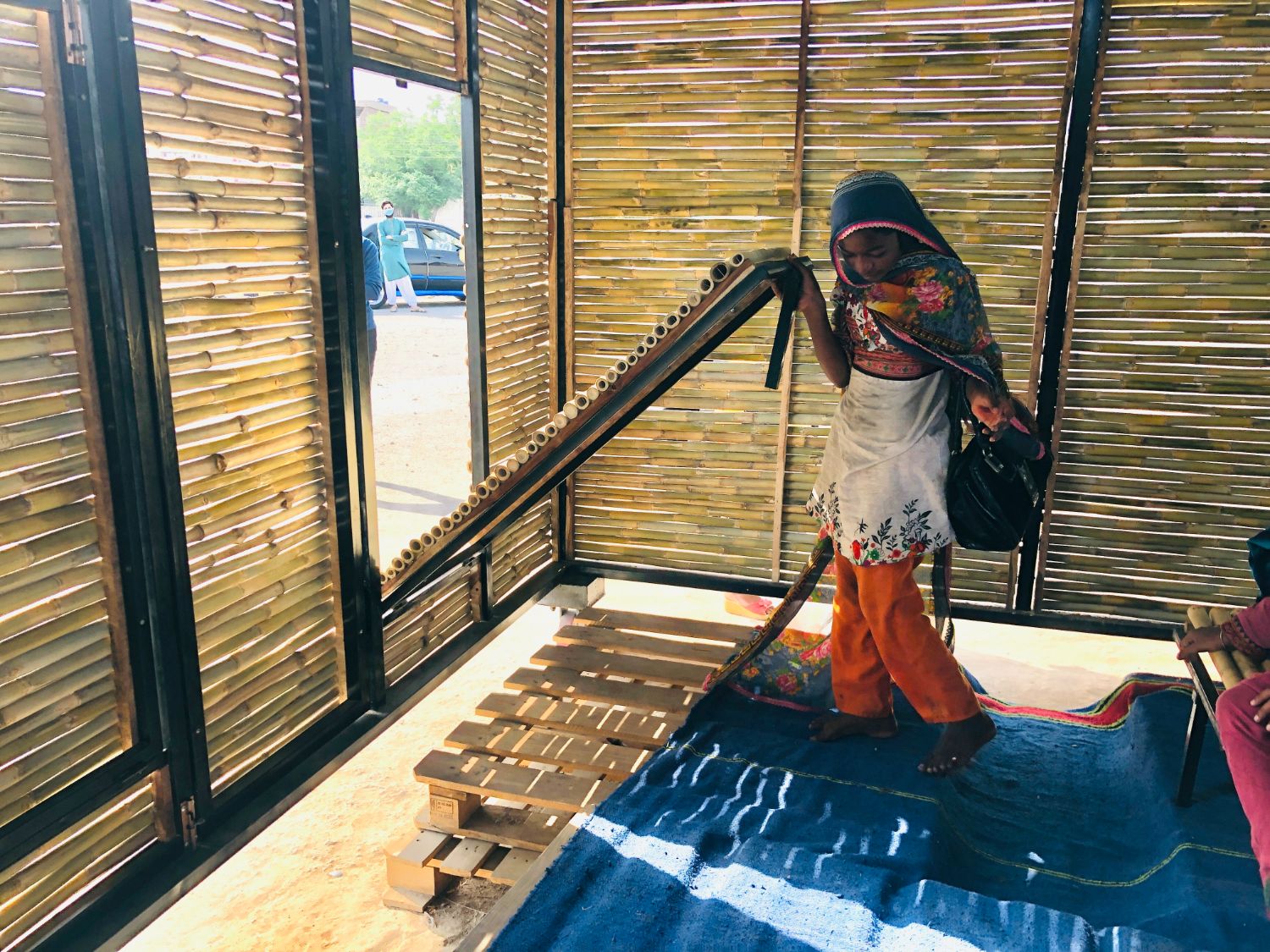 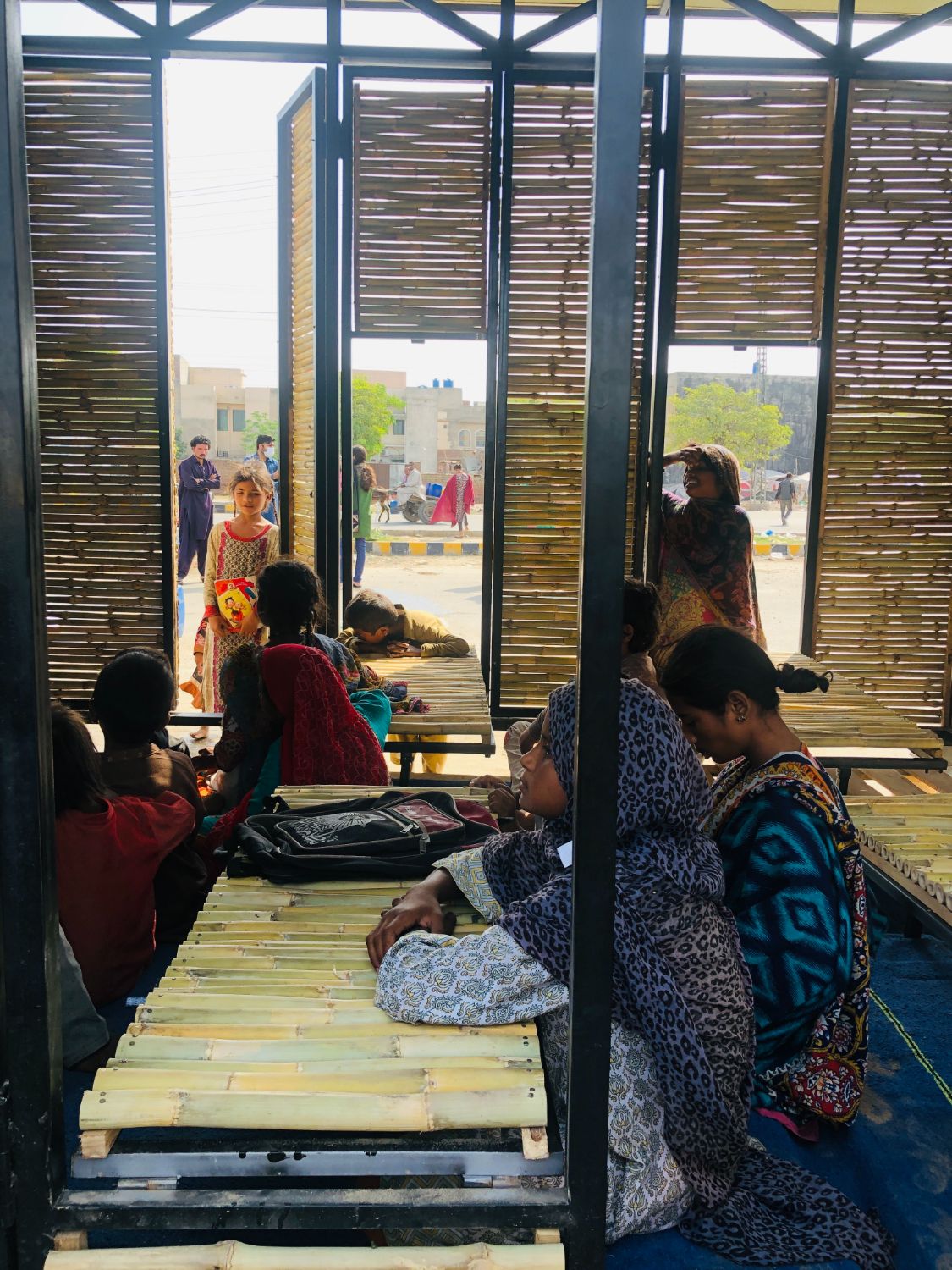 Slum School Prototype Design is a social design collaborative initiated by Architorque Academic & Research Center.  The project, initiated in 2020, is aimed at developing portable, adaptable, and contextual sensitive school units dedicated to the children of slum dwellers in the cities across Punjab. The first such unit has already been installed and is operating as a school in the informal settlement of Johar Town, Lahore.

In 2020, the center was approached by the local slum community and an organization i.e. Go Green Welfare Society, working on the education and skill development of the slum community. The organization with the help of the local slum community were running a school for the past few years first on the footpath and later in a tent. However, the community in general and the children in particular, had failed in taking ownership and exercising their agency in the process and space. The organization was also facing severe challenges in the operational aspects since they had to close the tent school if it rained or other such related conditions. Also, the school, being run inside the tent, had been placed in the informal settlement which is located on a highly commercial public land. The land had seen a great price hike in its value due to the opening of Lahore’s mega-mall Emporium. Thus anything permanently anchored on the land is considered a threat therefore the school had also been demolished several times by the local municipality leading to the demoralization and despair of the community and children. We, thus, were requested to design and develop an unconventional school unit that is inclusive in terms of its form as well as and function. The school is also designed to be portable so that it can move with the slum dwellers and to save the school from being demolished by the local municipal authorities.

Since most slums in Lahore are temporary in terms of their settlements i.e. they keep on moving from one place to another from time to time. Thus the school is designed to be a mobile unit and is not anchored to one place permanently. This has also saved the school from being demolished and the school has seen a drastic decrease in the drop-out student ratio as well.

The scale and size of the school are also responsive and sensitive to the context i.e. developed to respect rather than overshadow its neighborhood Jhugi ( slum housing unit).  The School is built with local materials which are frequently used in the slum i.e. bamboo, tarpal & pallets. The employment of vernacular material and joinery details in the school has imparted a sense of confidence and ownership in the local slum community since due to their familiarity with the material they can take care of the maintenance aspect of the school without any guidance. The school, being responsive to the climate, has incorporated passive design techniques such as cross-ventilation, stack effect, and diffuse light to tackle the hot climate of the city. The façade of the building in terms of its walls and floor are adaptable,  changing shape, and used as per the required activity and climate conditions. Lack of community participation, ownership, and the agency have been reinstated since due to the adaptability feature the school is now also being used for community gatherings and meetings. The community decides what other communal activity they are comfortable performing in the unit during off-school hours.

We have always observed that the development projects in our city i.e. Lahore, have always ignored the marginalized slum communities of the city both in terms of their human and as well infrastructural development. Our team leaders Ar Mehreen Mustafa & Ar Mirza Hammad Hussian are involved in education activism and mapping projects related to informal settlements. It is during one such mapping project we came across a group of local community members and Go Green Welfare Society who have been running a small school in a tent and were facing extreme challenges to retain the initiative. Upon learning our expertise and interest, they approached us to develop an unconventional school unit that can cater to the needs and challenges of the slum community and also can act as a beacon of hope and dignity for the community. The school was envisioned to be more than a formal learning space but a place where informal learning and communal activities will thrive. The project was started by conducting field research and a survey which was led by the community members, especially very excited children. The research was later published as a manual. A community-based hands-on learning approach was adopted during the design and development process. Our team collaborated and learned from the local community members regarding their lives, daily routine, culture, and most importantly vernacular building material and joinery details.  With the help of the Go Green Welfare society and local community members, the first school was designed, developed, and installed in the informal settlements located near Emporium Mall, Lahore.

With the help of local community members and Go Green welfare society, we have successfully designed and installed the first SSPD School in Johar Town slums. By keeping the core design principles of the SSPD project i.e. portability, adaptability, and being sensitive to the context, we now aim to scale up the project by developing and installing more such mobile slum school units in other slums of Lahore and Punjab. We also aim to do more experiments with the joinery details, min or no use of MS for the main structure, and to involve the community in the construction process, which was missed in the first SSPD School due to COVID-19 restrictions.

We are now in the process of developing the 2nd SSPD School in another slum of Lahore. For that, we are now collaborating with the local slum community and local organization which was running a school in the slum but they have to shut the school due to the non availability of proper space. We shall start from the starch i.e. conducting field research and survey under the guidance of the local community, developing the design, and constructing on-site with the community members. We now aim to develop and build our 2nd SSP-D School by the end of 2021.

Link to the project on the architect / engineer website: http://architorque.com/