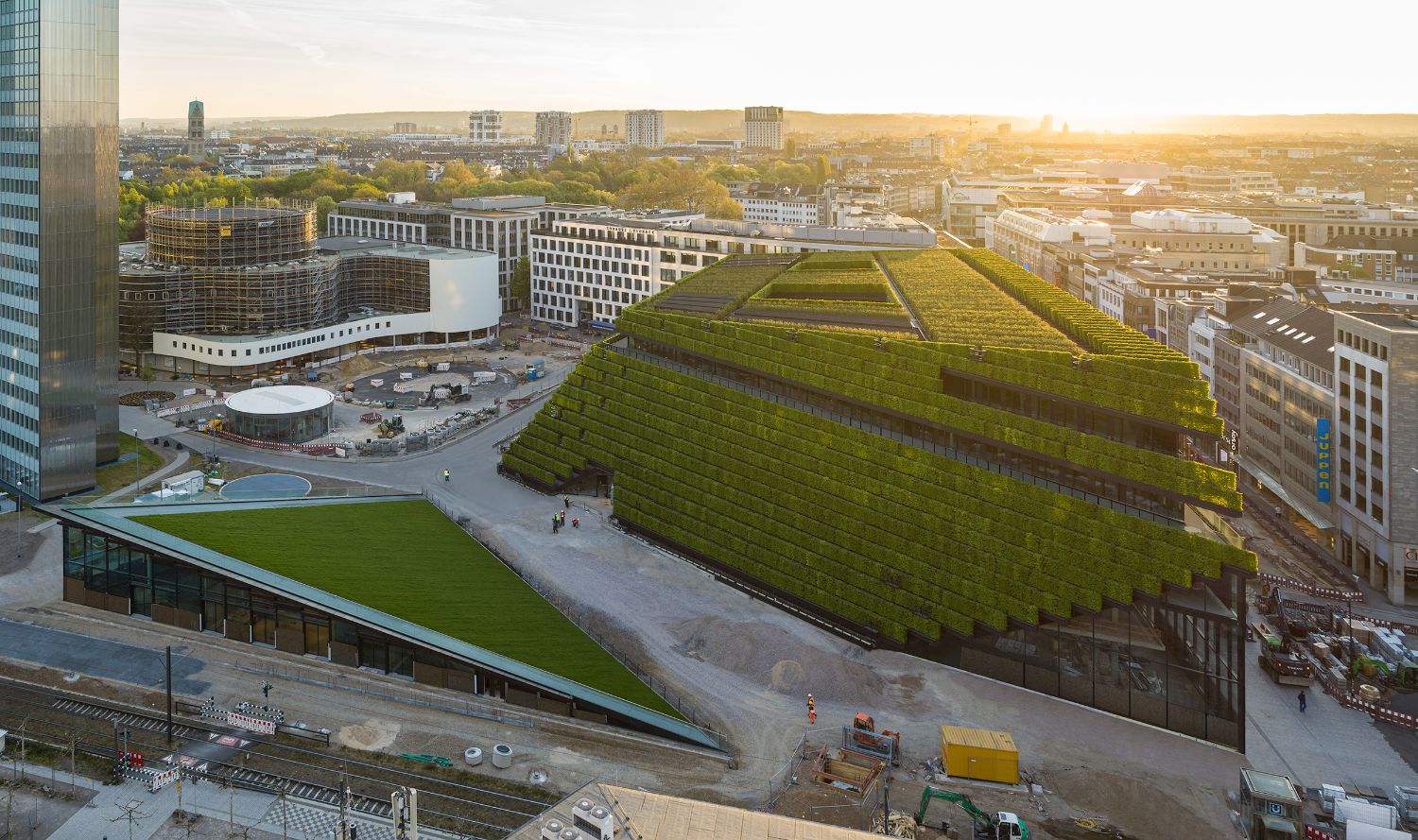 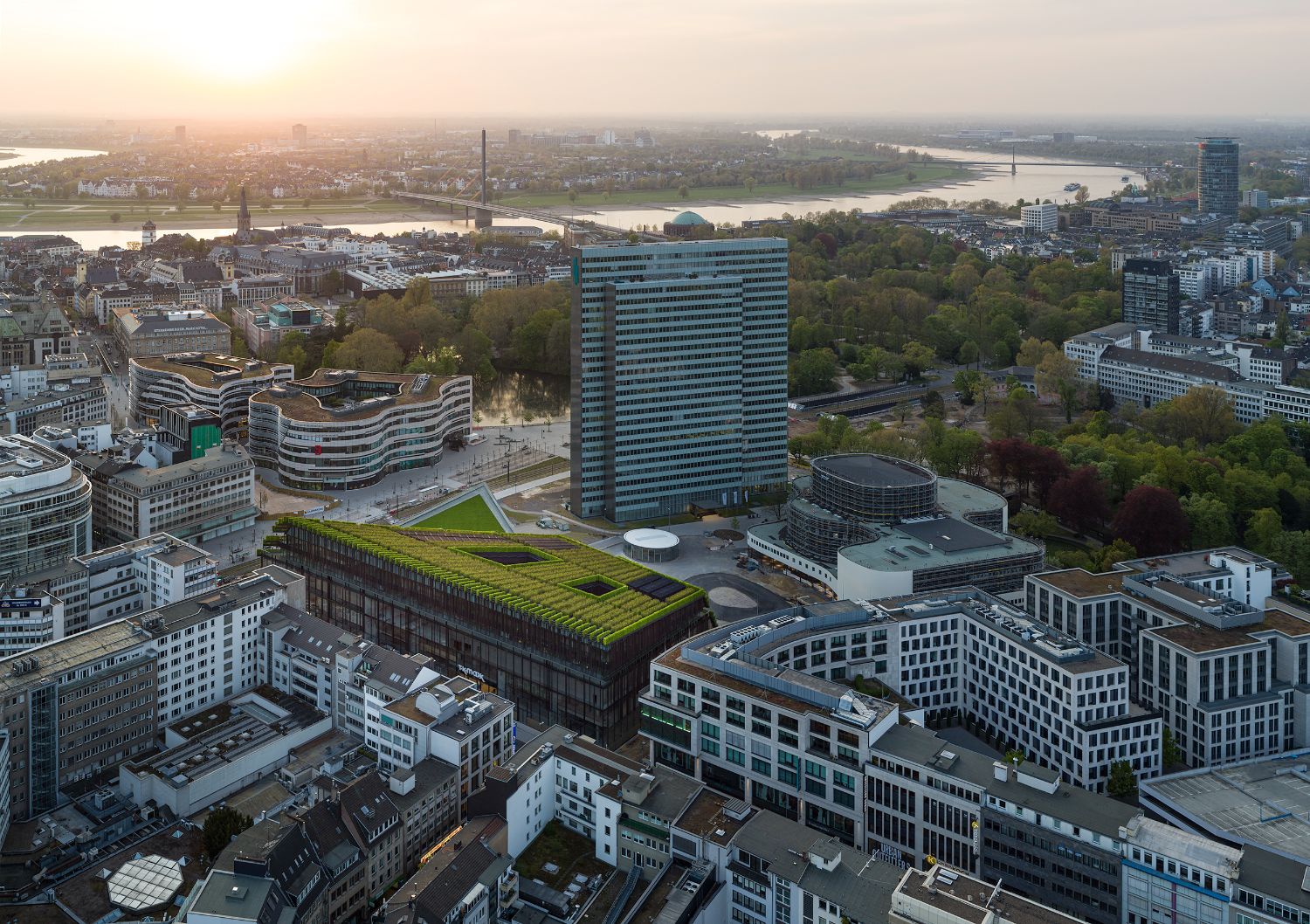 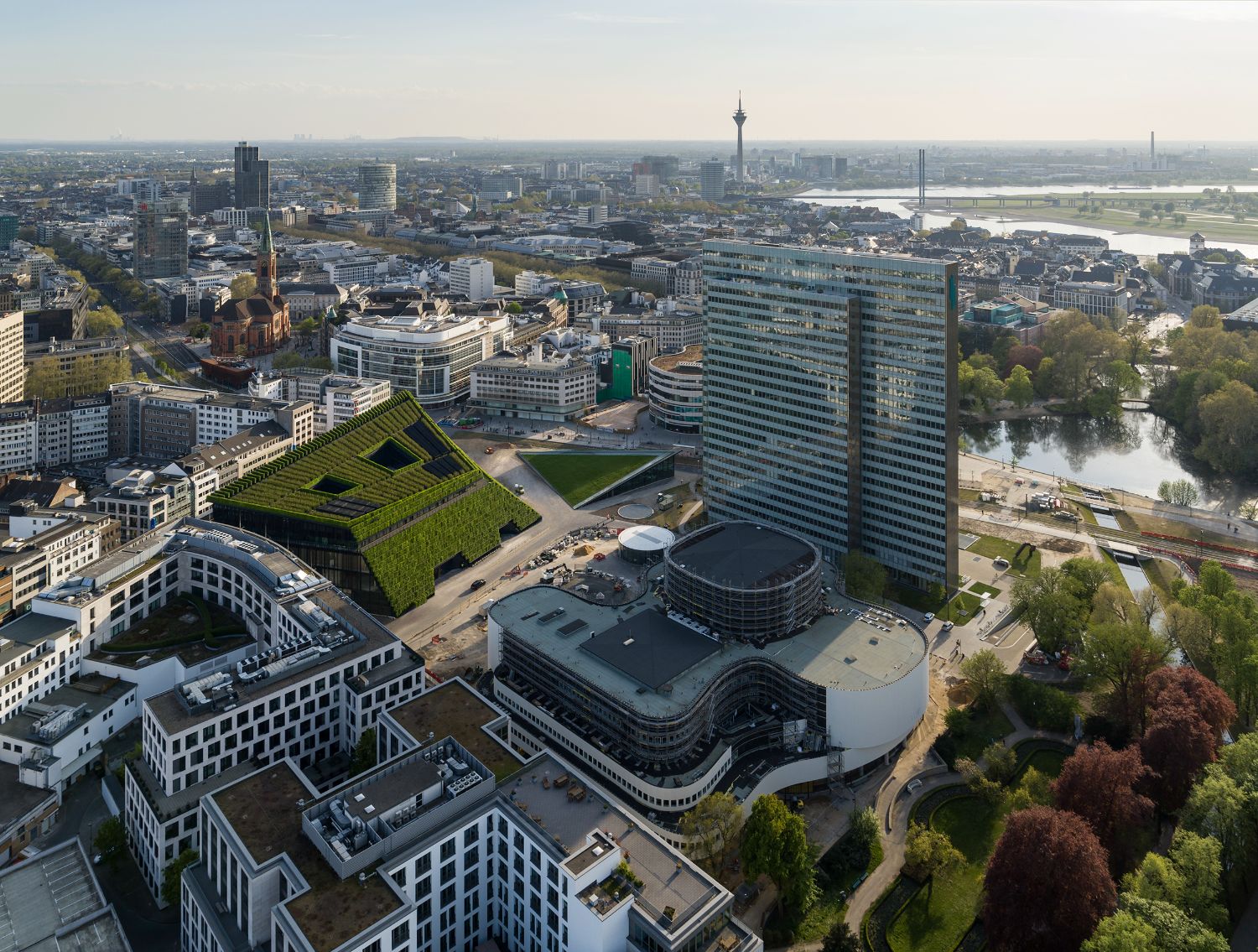 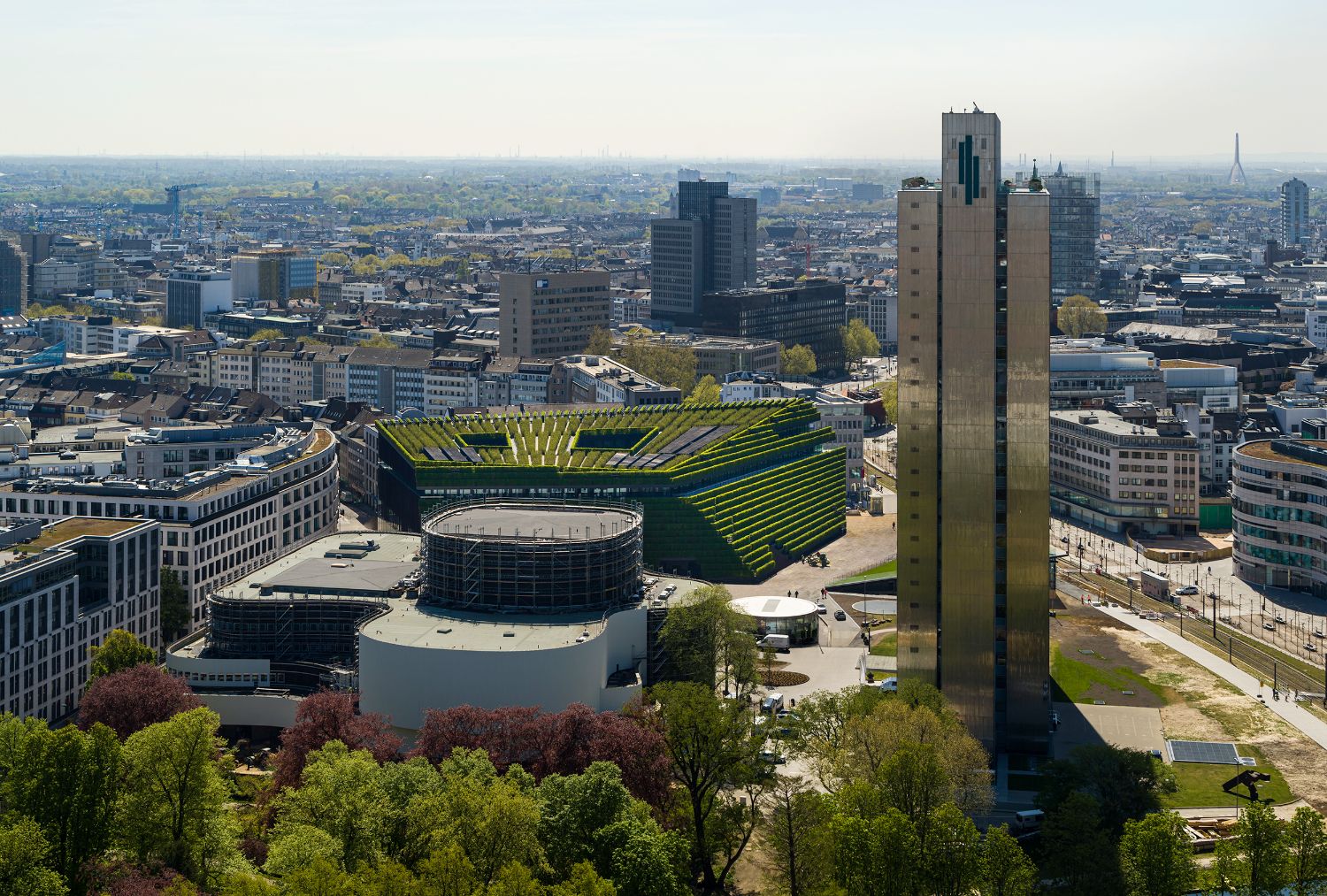 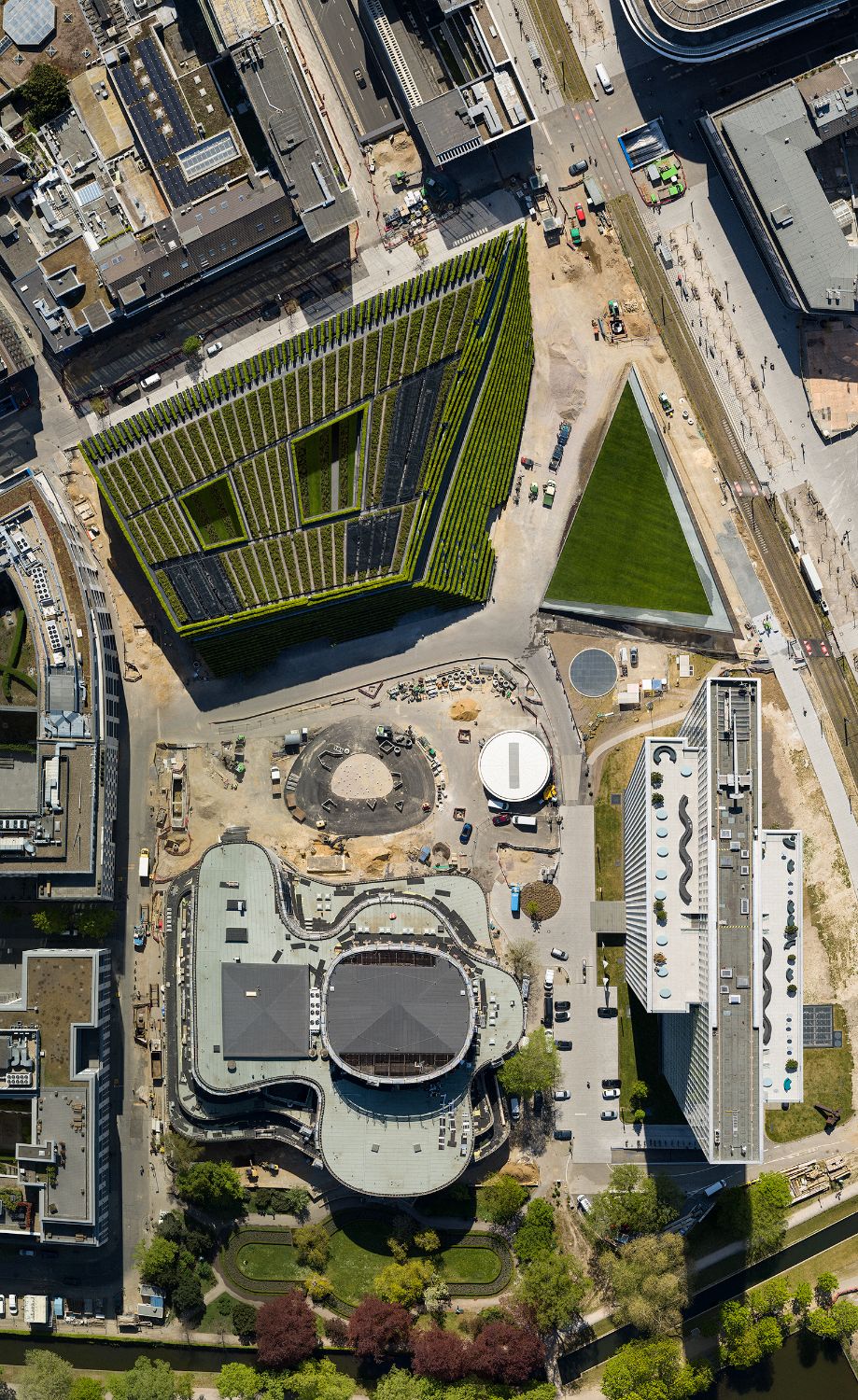 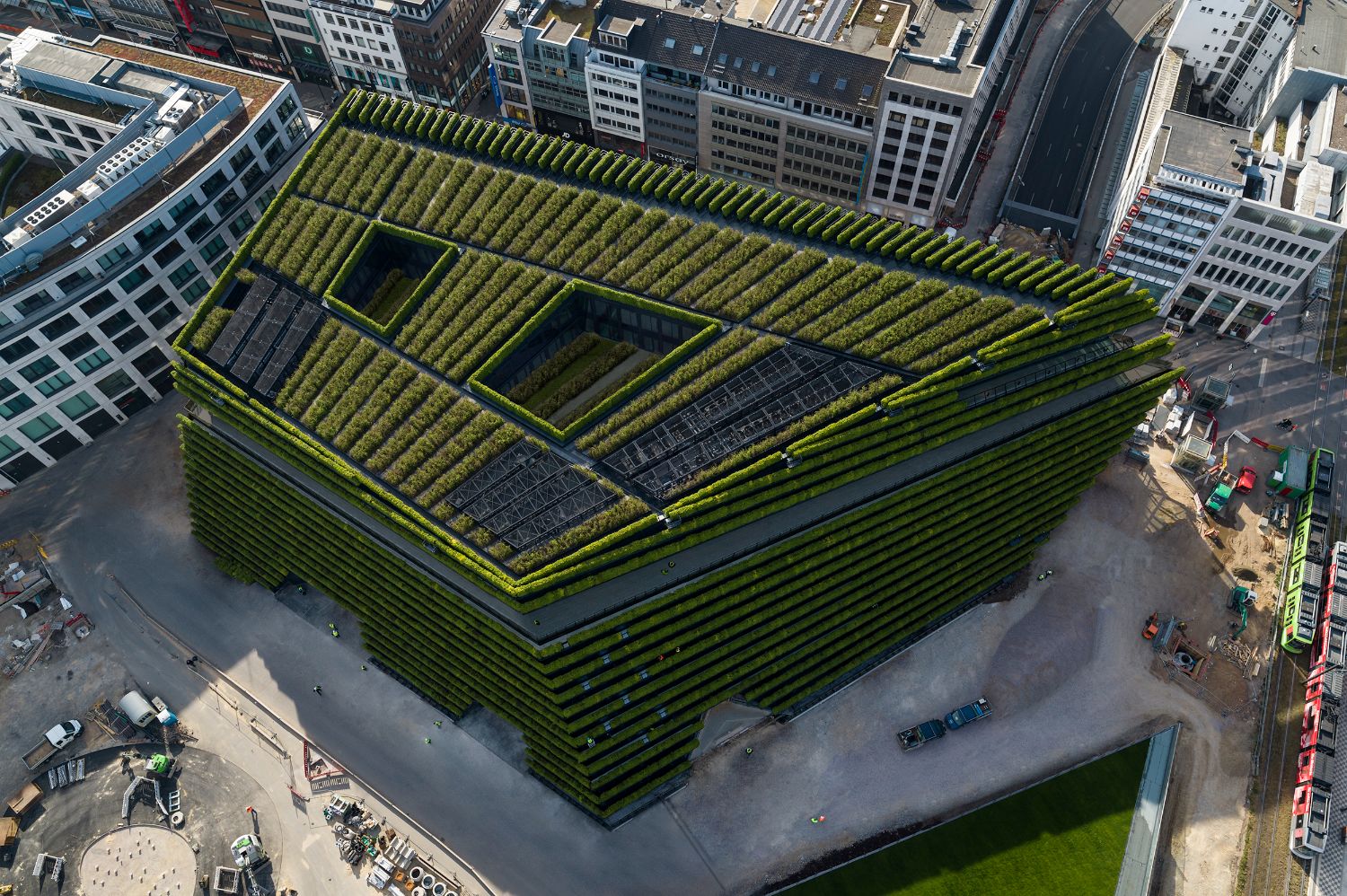 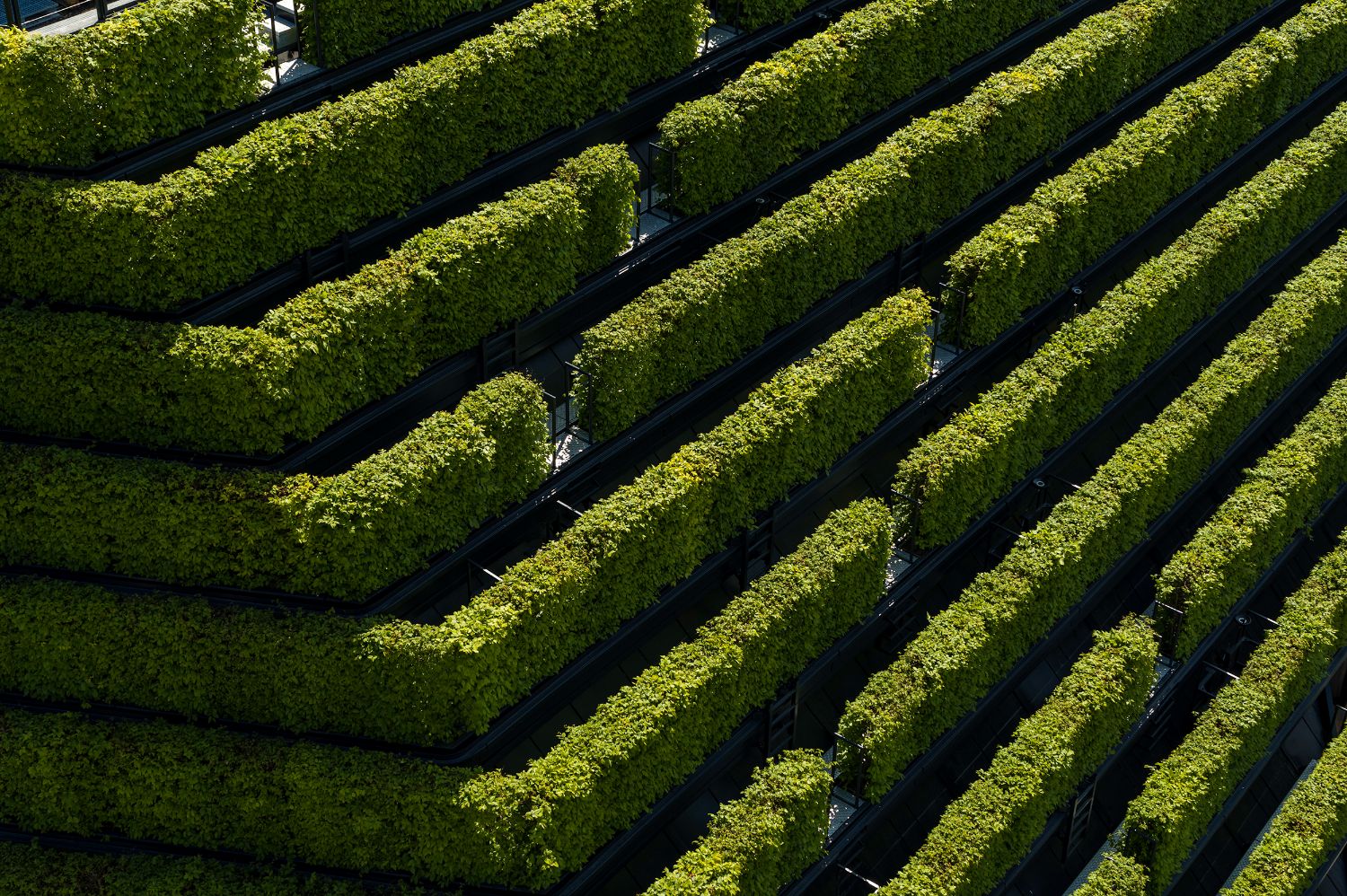 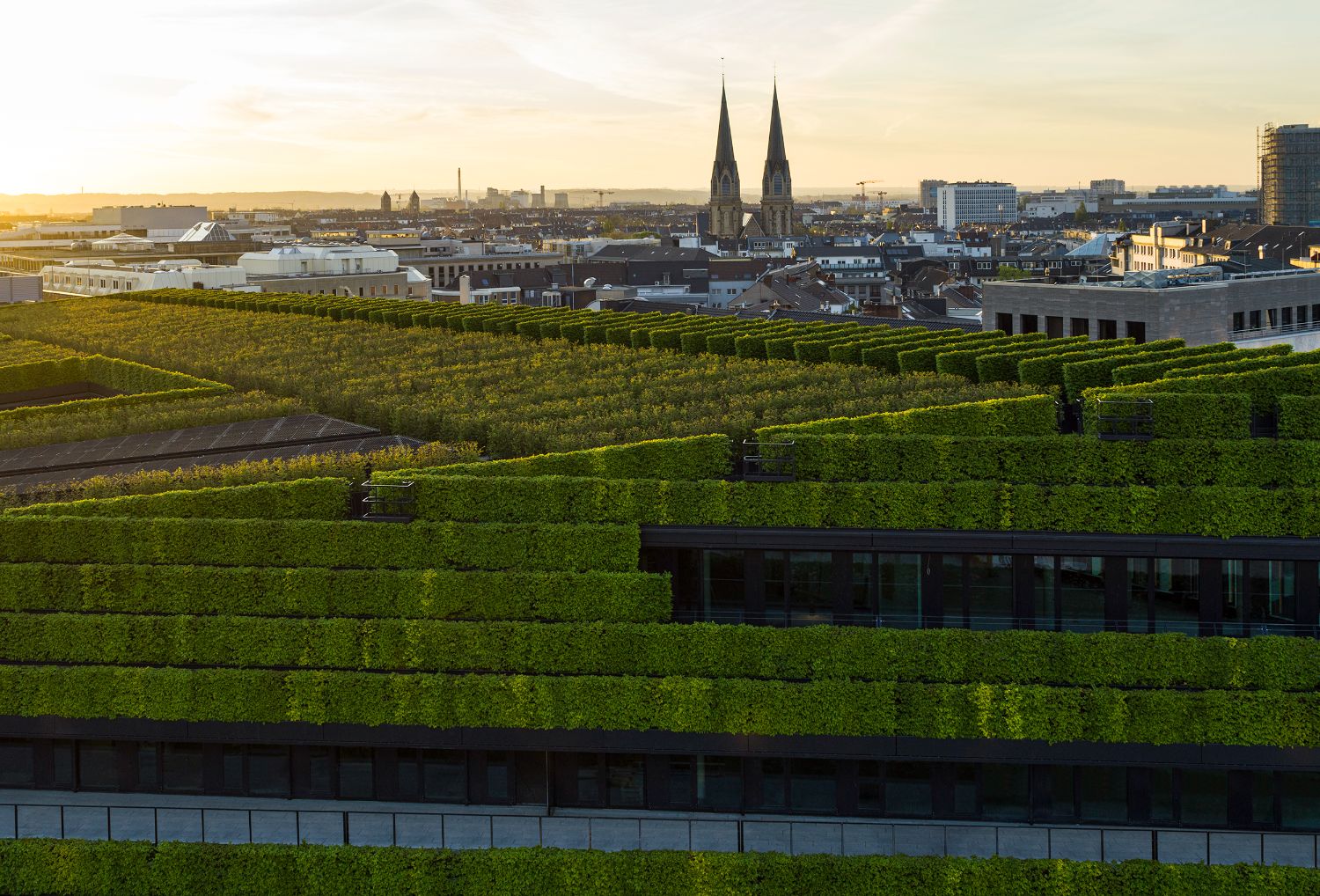 Kö-Bogen II also represents a paradigm shift: from an urban perspective, it signals a departure from the automotive era and a turn towards people oriented planning. And with Europe’s largest green facade, it offers a forward-thinking urban response to climate change. Giving back as much green as possible to the city is a task that ingenhoven architects have been working on for decades and across different climate zones. With its supergreen® concept, the office is taking a comprehensive approach to sustainability.

Today, at the site where an elevated motorway dominated the landscape until 2013, the Hofgarten has moved back into the heart of the city. The composition of Kö-Bogen’s dynamic green facades was inspired by Land Art. They enable the new building complex to oscillate in a deliberate indeterminacy between city and park, and open up the view to icons of post-war modernism – the clear austerity of the Dreischeibenhaus [1960] and the buoyant lightness of the Schauspielhaus [1970], whose renovation was also undertaken by ingenhoven architects. Kö-Bogen II is a contemporary answer to these two historic landmarks, confident without being overbearing. Since 1992, Christoph Ingenhoven has been pursuing the idea of redesigning this central part of Düsseldorf and has provided the city with numerous essential impulses through his work.

Between city and park – a new type of building

Kö-Bogen II, a two-part commercial and office building, was developed in response to the existing urban situation. With their sloping facades turned towards each other, the five-storey, trapezoidal main building, together with its smaller, triangular counterpart, form a dynamic entrance to Gustaf-Gründgens-Platz. Approaching the building from Schadowstrasse or Berliner Allee gives an unobstructed view of the icons of post-war modernism – the Dreischeibenhaus and the Schauspielhaus – and behind them the Hofgarten [the public garden] with its magnolia trees. The Kö-Bogen facades facing the plaza at Gustaf-Gründgens-Platz are entirely green, entering into a dialogue with the Hofgarten.

Functionally, Kö-Bogen II mediates between the different facets of urban life: between the pleasures of culture and of shopping. A variety of uses – retail, gastronomy, offices, and recreation – come together on a gross floor area of 42,000 square metres. Measuring 27 metres high and 120 metres long, the facade of the main building along Schadowstrasse – one of the busiest shopping streets in Germany – is completely glazed. Expanded metal slats structure the interior, varying in transparency from closed to open, depending on the perspective. The other facades including the roof are more tempered and planted with 8 kilometres of hornbeam hedges – Europe’s largest green facade. The accessible sloping roof of the 10-metre-high building opposite is also completely green and invites visitors to relax and take in the sun. The composition of these green areas is inspired by Land Art, and enable Kö-Bogen II to oscillate in a deliberate indeterminacy between city and park.

The hornbeam was chosen as a native hardwood, and the selected varieties keep their leaves in winter. In spring the hedges glisten with their fresh, light green foliage, which deepen to rich,

dark green in summer, then to golden brown in autumn. This greenery improves the city’s microclimate – it protects against the sun’s rays in summer and reduces urban heat, binds carbon dioxide, stores moisture, absorbs noise, and supports biodiversity. The ecological benefit of the hornbeam hedges equals that of approximately 80 fully grown deciduous trees. Giving back as much green as possible to the city is a task that ingenhoven architects have been working on for decades and across different climate zones. With its supergreen® concept the office is taking a comprehensive approach to sustainability. A bespoke planting concept is developed for each project according to the local context and marks a forward-thinking urban response to climate change.

with the botanist Prof. Dr. Strauch from Beuth University of Applied Sciences in Berlin, and tested in a trial installation. Based on a precise site analysis, structural requirements were defined, such as the size and type of planters needed for the 1.3-metre-high hedges. A concept for the supply of water and nutrients along with plant maintenance, including regular pruning, was also developed. While the shrubs on the roof of Kö-Bogen II grow in conventional plant beds, those on the north- and west-facing facades are grown in a special system of horizontally arranged containers on a separate supporting structure that is firmly connected to the facade. The plants were supplied by a nursery where they had been growing since 2016, so they could be delivered to the construction site in autumn 2019 with fully developed roots.

Link to the project on the architect / engineer website: https://www.ingenhovenarchitects.com/projects/more-projects/koe-bogen-2-duesseldorf/