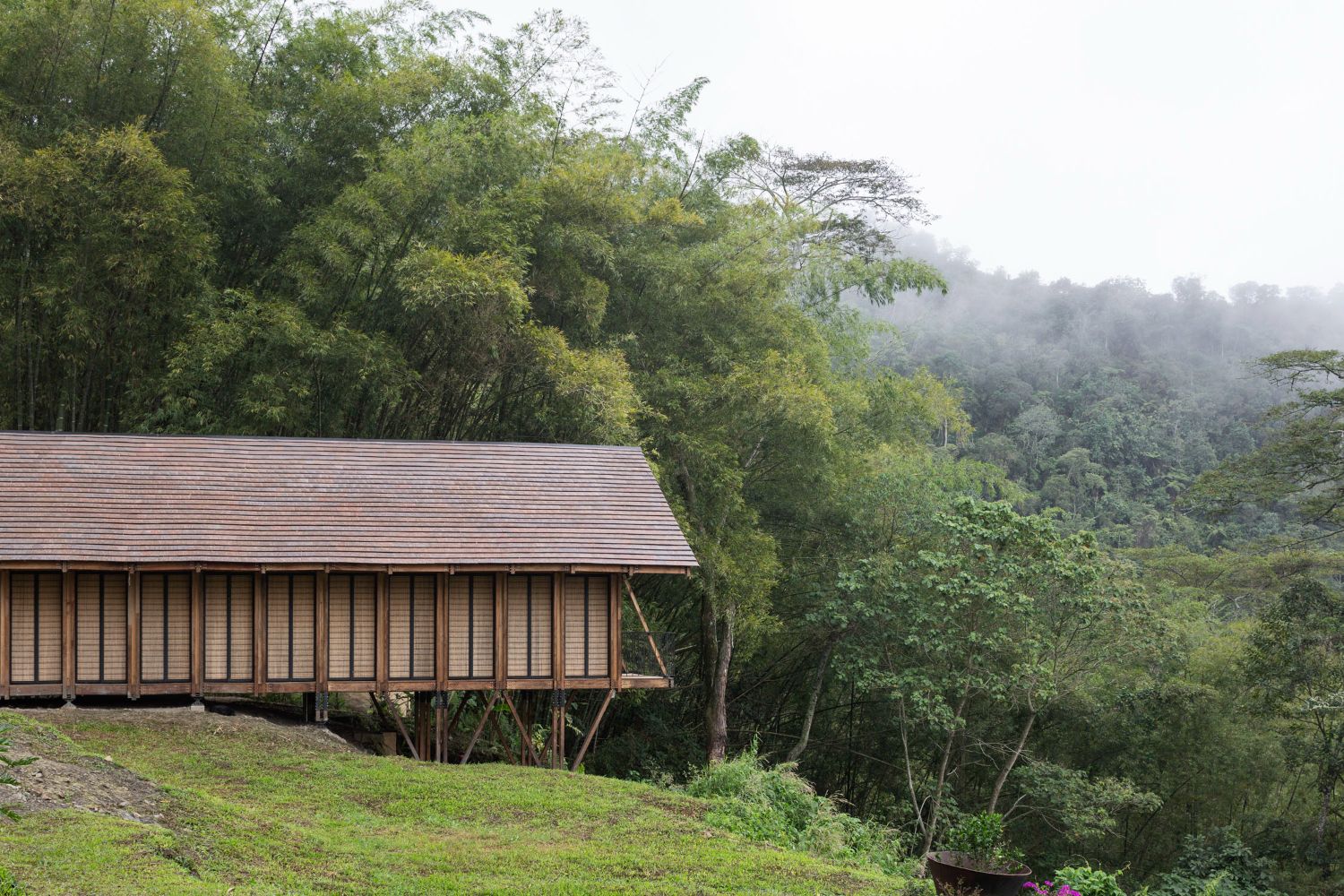 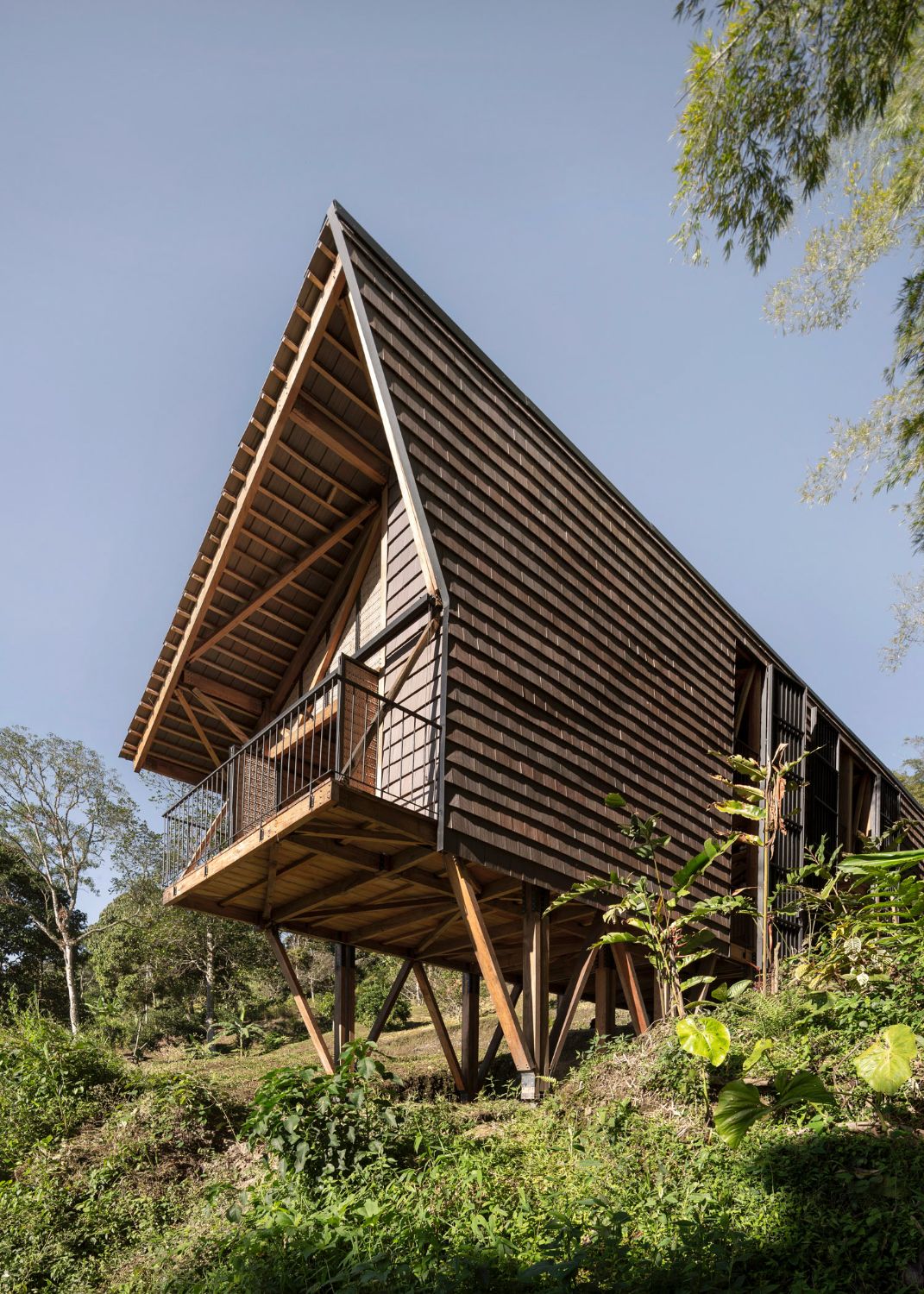 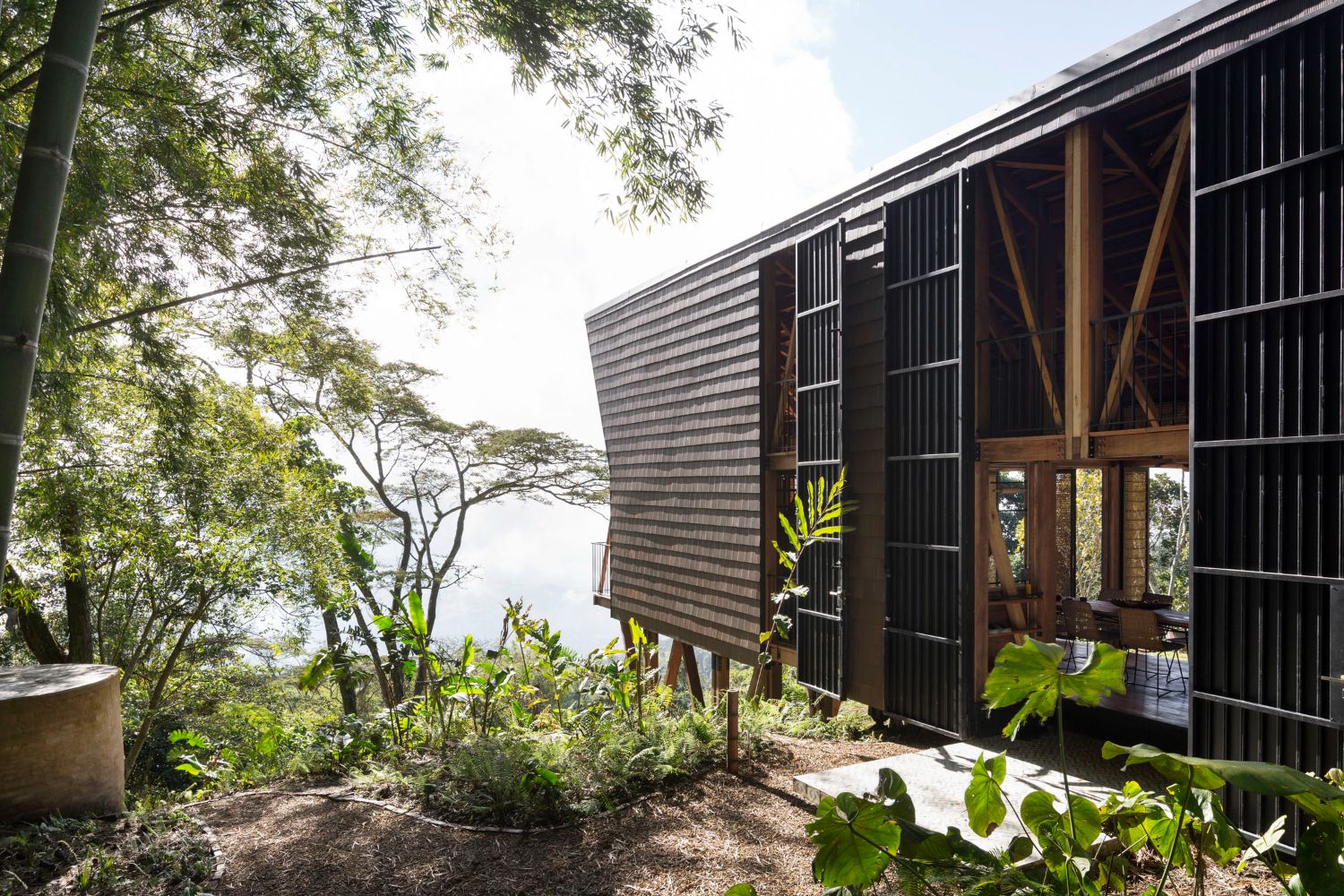 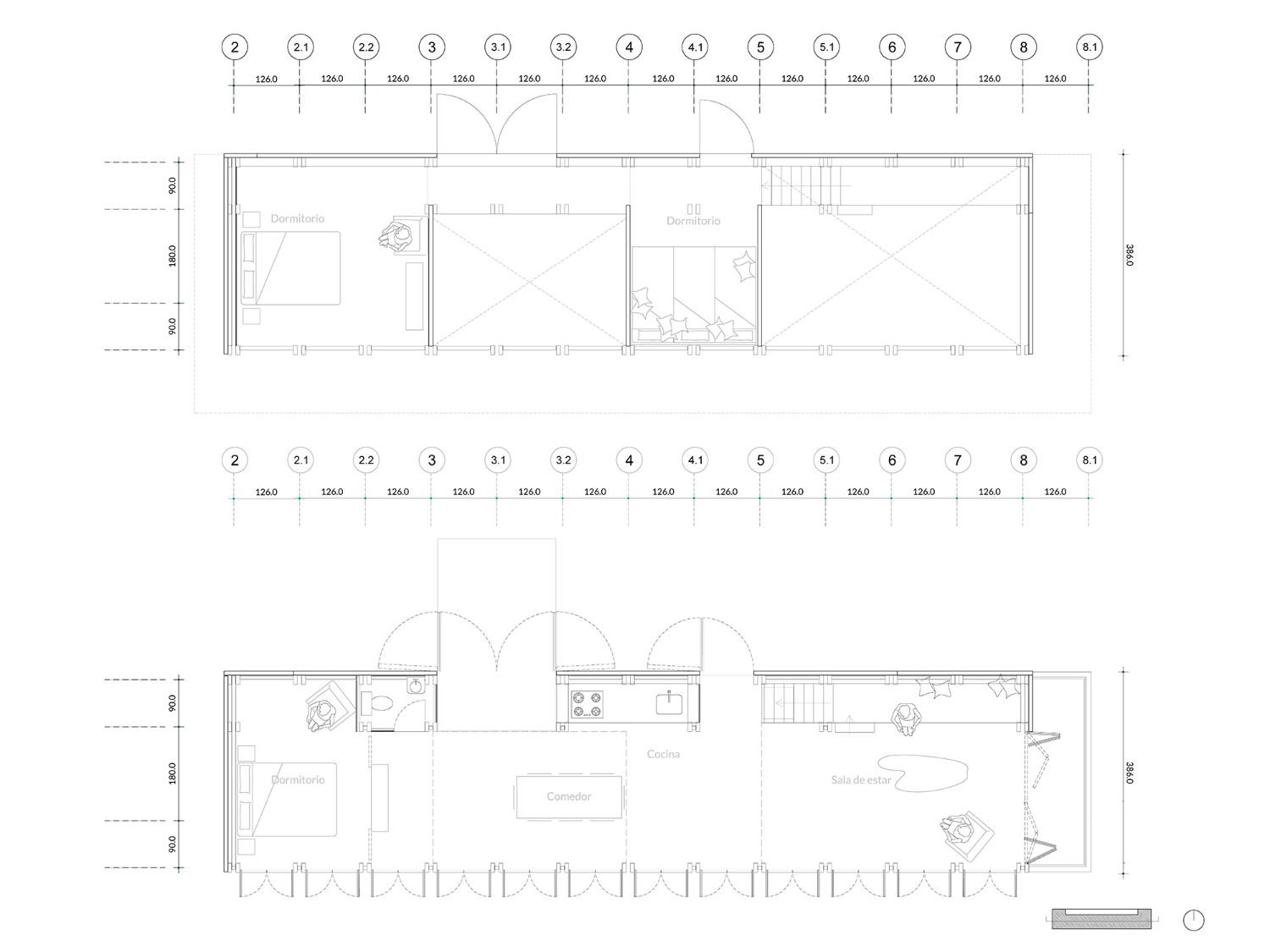 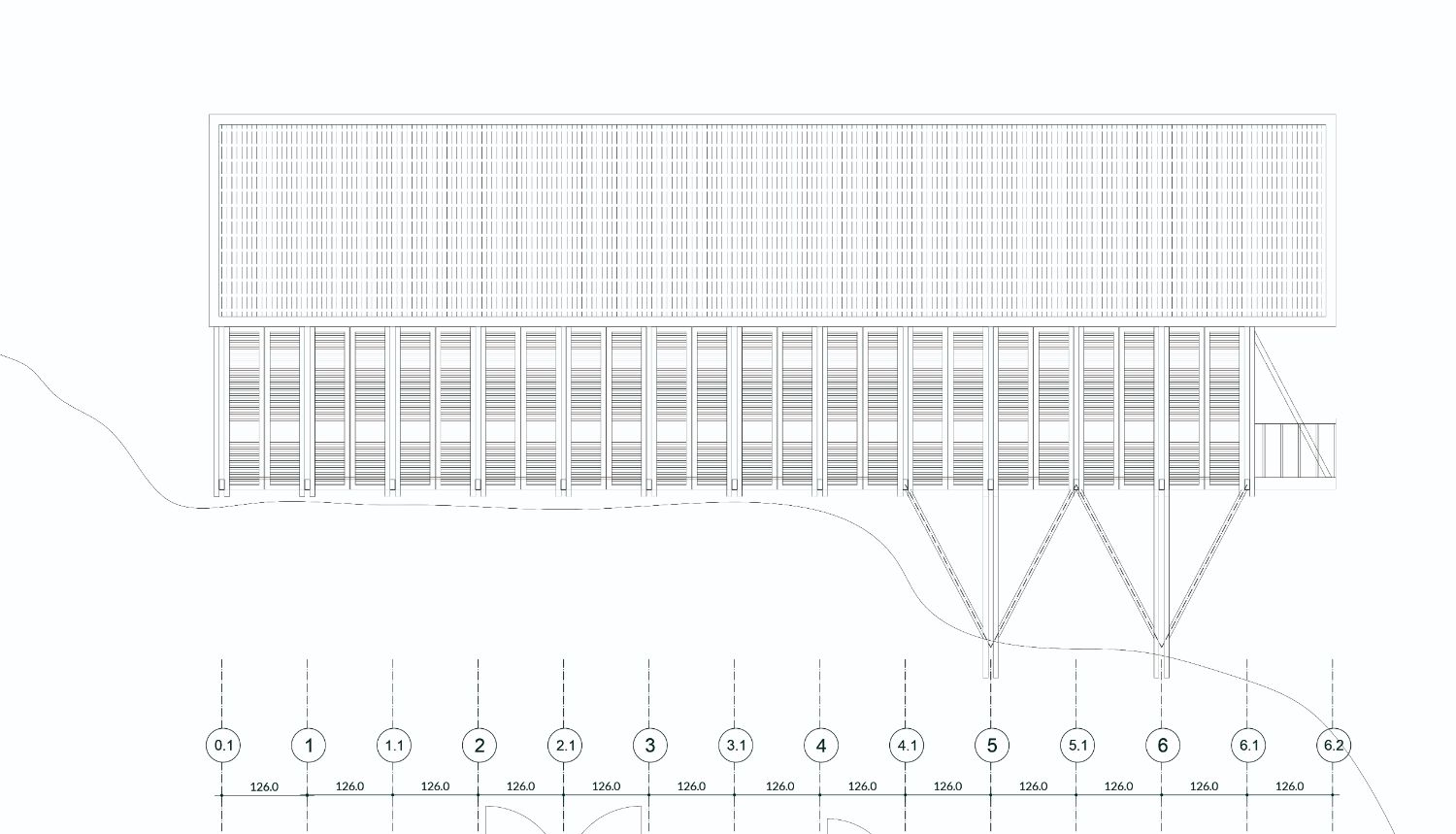 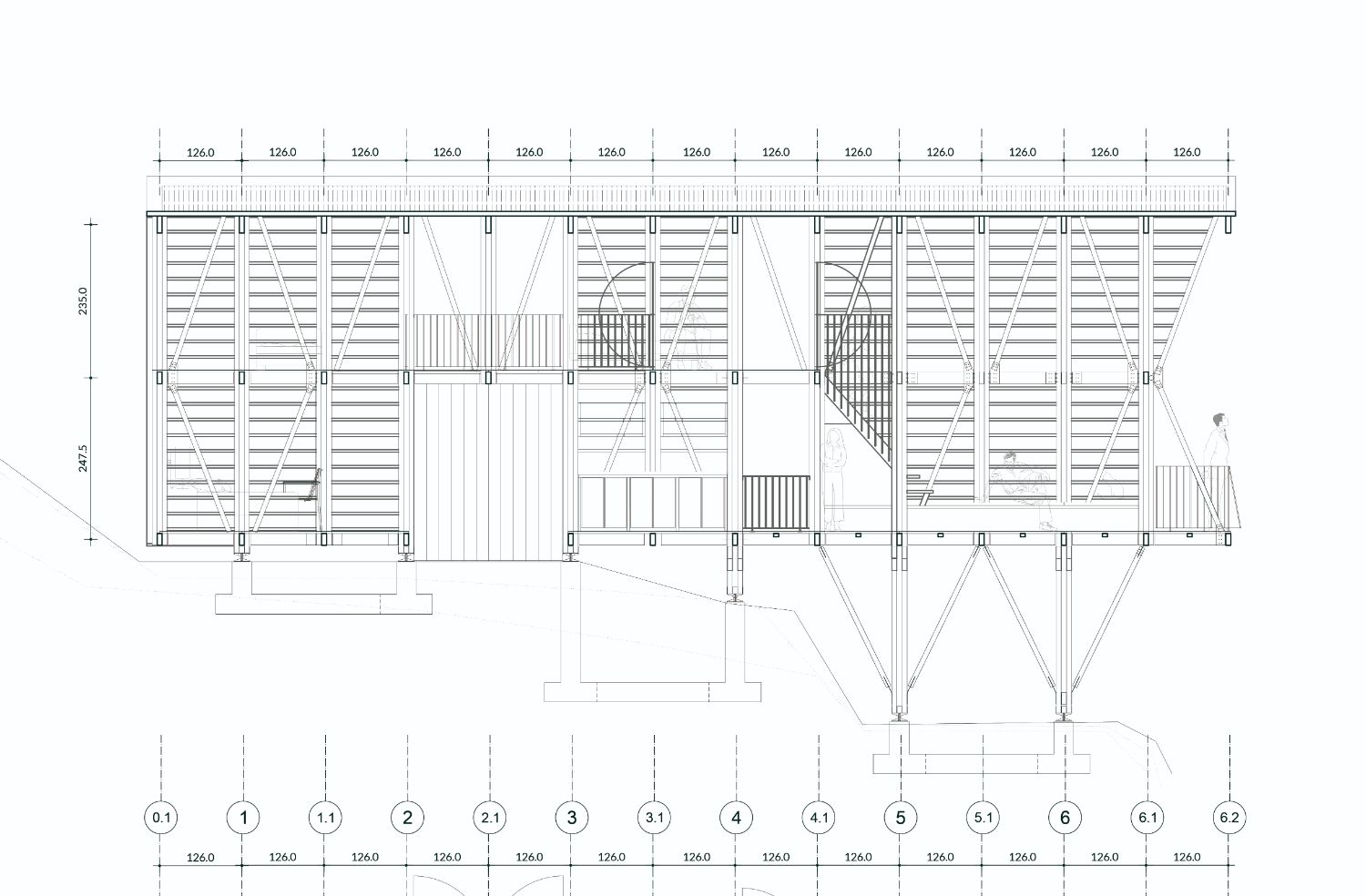 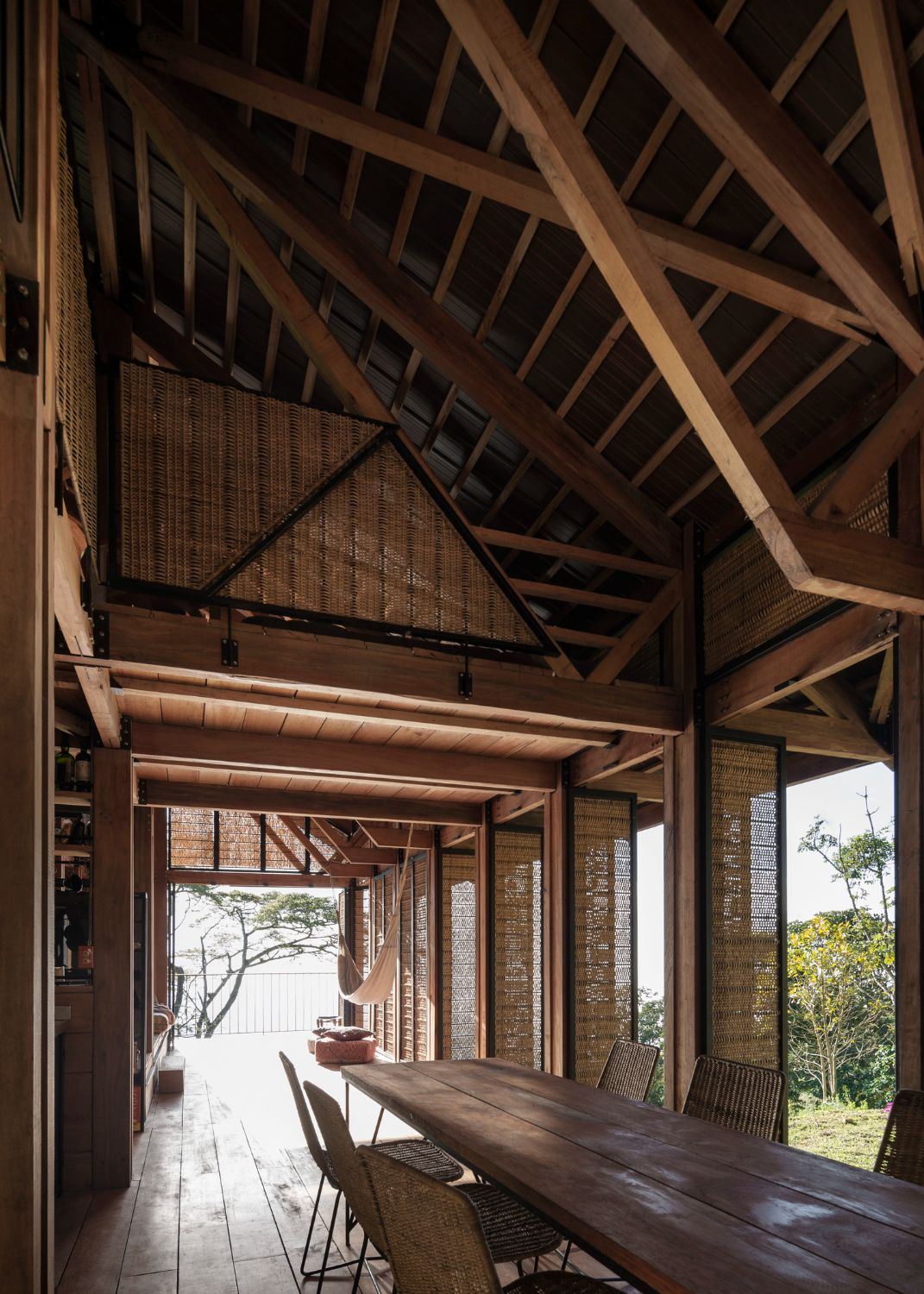 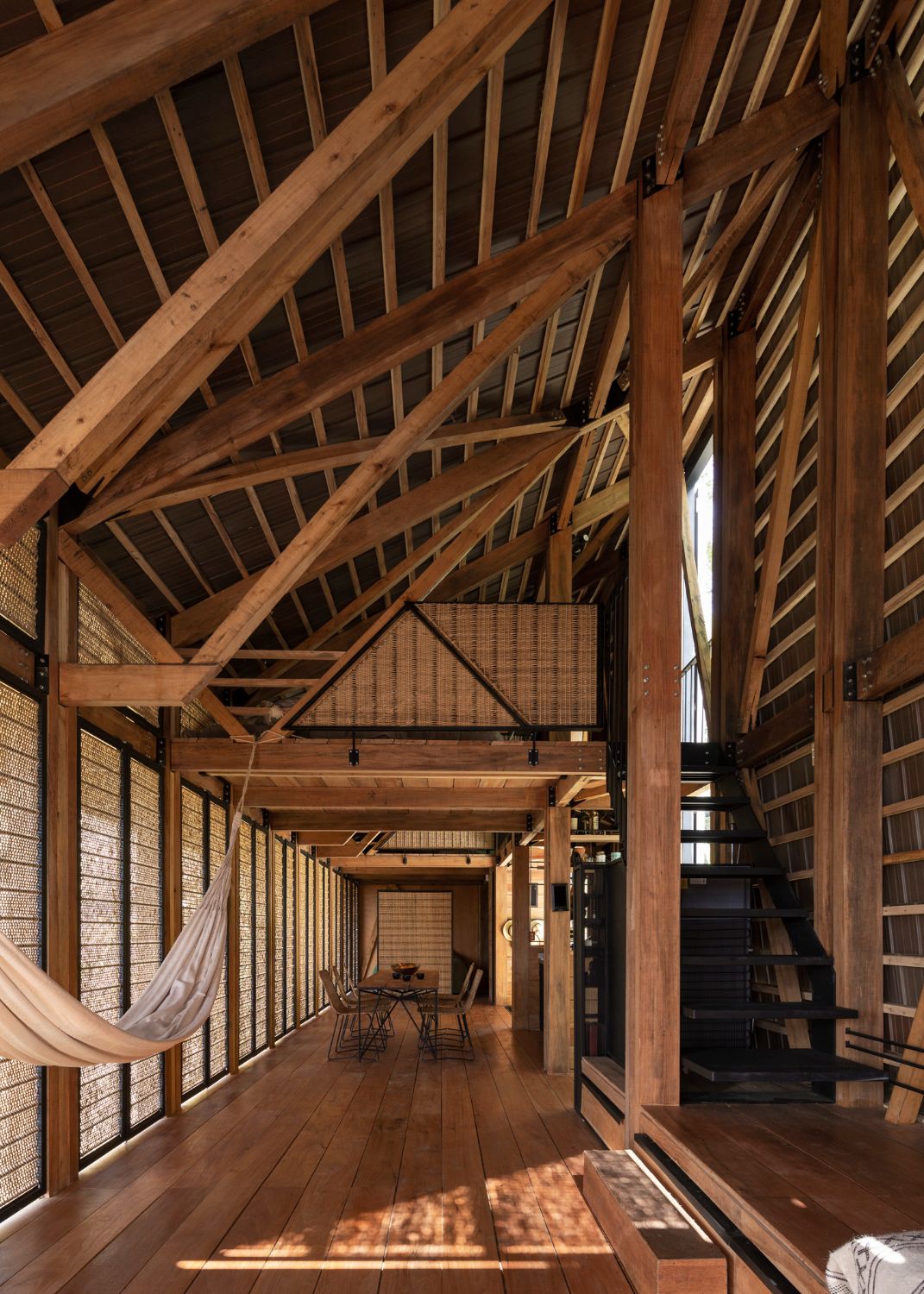 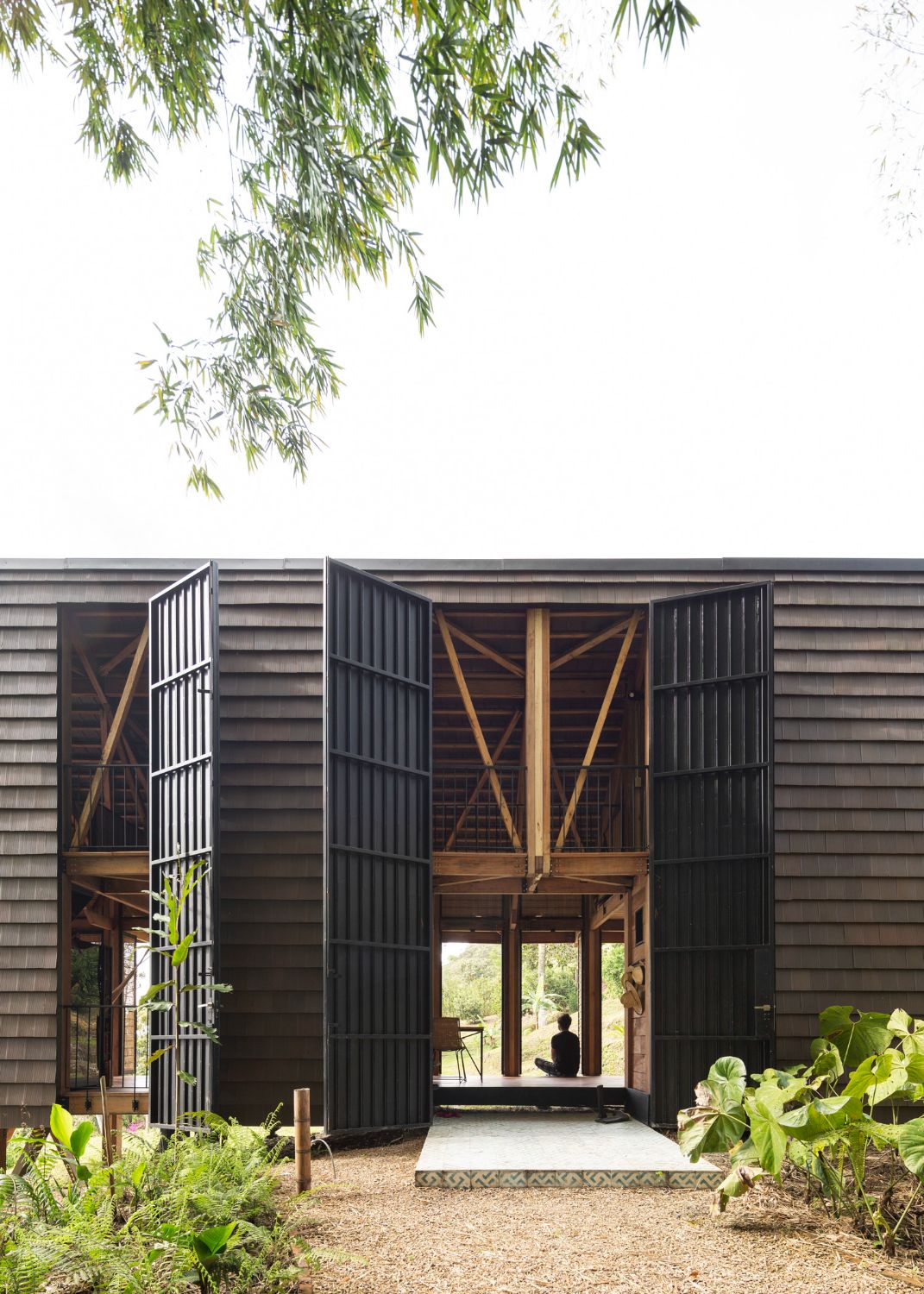 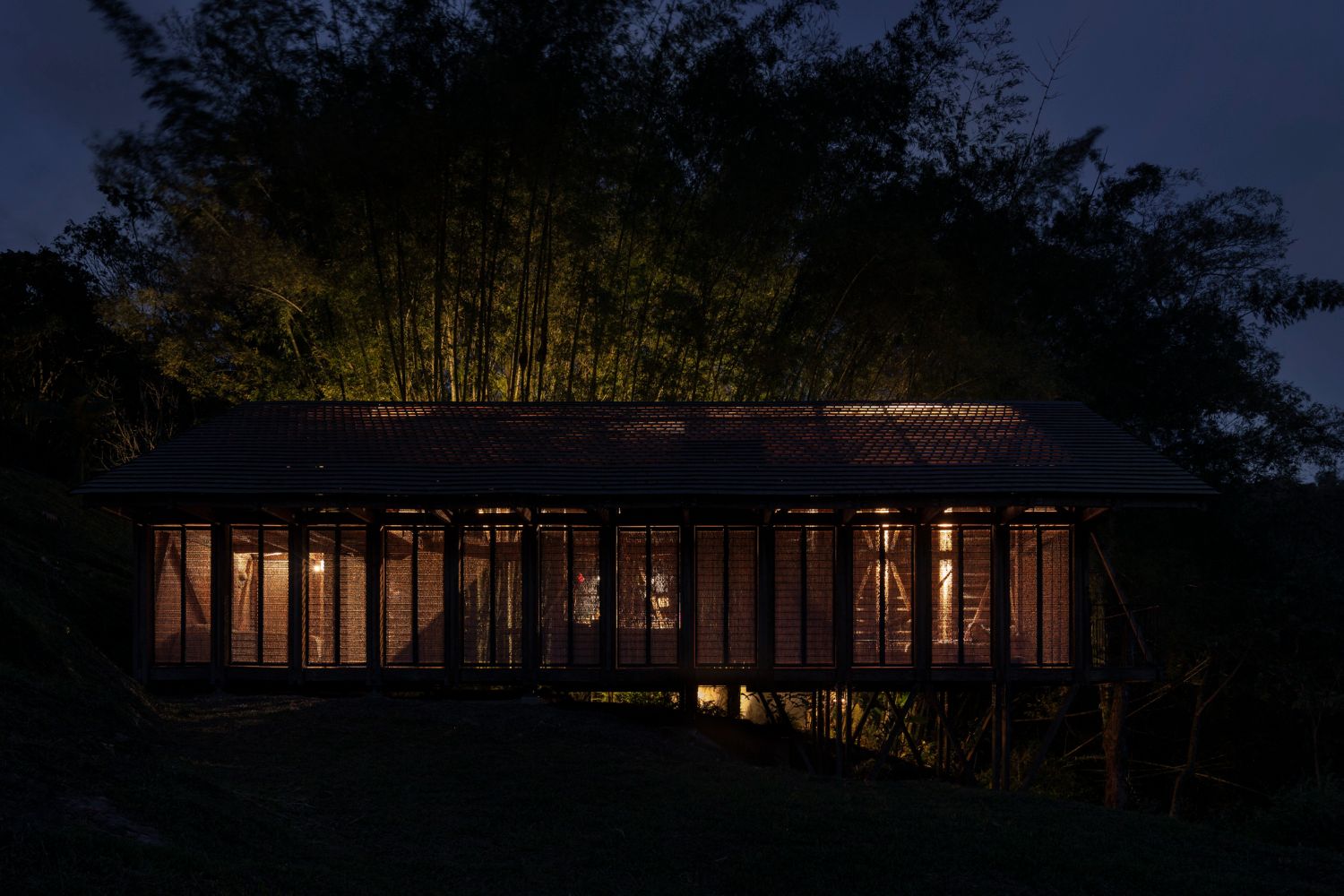 Casa Tejida is an experimental house associated with a family coffee plantation in an isolated rural community in the region of Cundinamarca, Colombia. It is an exercise of professional responsibility towards the environment and the society where it is implemented. During the design and construction process, a community of work and coexistence has been formed, including the maximum number of possible agents in the decision making process, understanding the whole process as an opportunity for learning and training through the prototyping of the house. Casa Tejida is not only physically woven, but also weaves the landscape where it is implanted through the participation of its inhabitants in the project, thematizing social construction, open and intelligent design, biodiverse architecture and low environmental impact, and trying to innovate in architectural models for the future development of rural areas of Colombia.

There are many paradises in the world, and La Vereda Fical is one of them. It belongs to the municipality of Nocaima, in Cundinamarca, Colombia, one and a half hours from Bogotá, the capital of the country. It is a rural and dispersed community that consists of approximately 20 families arranged along an unpaved mountain path of very difficult access, where each family has different resources that share with the rest of the community. Until very recently, the area, because of its proximity to the capital but its rugged and wild orography, was very difficult for visitors to access, becoming isolated during rainy days. This particularity, along with the temperate climate of the area, has made this hillside a place of incredible life and biodiversity.

Casa Tejida proposes an architecture that relates to the environment and context in which it is developed, yet not exclusively through its physical form, but from the learning items that have occurred throughout the process. Just as formal ways of learning no longer consist of a linear or vertical way of knowledge exchange. The building and designing process of Casa Tejida has had the will to generate new forms of collaboration and exchange between all the participants in the process. The construction of the learning, exchanging and collective construction community have been as important as the realization of the project. Topics like new ways of doing architecture, agriculture, caring, nature, biodiversity and landscape were daily addressed and discussed.

Living on site. Being Part of the Community.

The difficult access to the construction site made us live during the work in the adjacent community, a few meters away from Casa Tejida.  Having a construction so close, creating new relationships while being in the community we valued and shared the local knowledge coming from the inhabitants. For six months we have been living in this steep sloping terrain.  Casa Tejida is located perpendicular to the contour lines, in contrast with local constructions, adapting better to existing topography and avoiding large earthworks, so common in the area, taking advantage of the best solar orientation and creating different ecosystems in each side of the house.

The repetitive wood structure of casa Tejida is inspired from pre-Hispanic architecture, where some columns are buried in the ground while  others simply rest on stones, with the idea that in the early years those buried wooden pillars  hold the house, but years later when they become rotten, the columns resting on the stones hold the bearing load. Proposing a three step design, which enables us to leave open items once the construction began, gave us the opportunity to explore the region looking for local non-standardized and intelligent constructive solutions that could be applied to the design. Finding the woven facade of the house was one of the most beautiful moments of the process: On the way to the site from Bogota, we casually met Maria, who has a natural fibers woven furniture business and together with her we worked on adapting her weaving techniques into a construction element, resulting in an innovative implementation for the project and also for Maria’s business.

The three little pigs story was wrong. Fleeing from concrete as the only building solution.

In Colombia, in spite of its natural richness and forests, there is not much tradition in wood building and dwellings on palafittes, methods that are understood as poor communities’ constructions. Casa Tejida proposes an architecture made with techniques and materials better adapted to the places and climates they are located in, generating less impact and providing high quality architectural solutions. The project has a premise to explore prefabricated solutions, also with a high degree of craftsmanship,  where wood and metal guilds have produced the pieces of a puzzle to be assembled very quickly on site. Together with a small cluster of companies we explored this innovative way of building in Colombia. That allowed the affected communities to understand other paradigms of how houses can be made, more respectful and adapted to the environment, better ventilated, healthier and more liveable after all.

The way in which Casa Tejida is designed and built, is inspired from digital manufacturing and open source systems, makes it understandable by all, the growth of the structure has made itself a learning process for the community, but not only that, the form of open and replicable design was understandable by everyone , from the clients to the architects as well as designers of the team themselves, who have been able to participate in its assembly . This simple and visible assembling details made the architecture of Casa Tejida comprehensible, adaptable and replicable in any other place by anyone.

Less is less. Building less is a must for our future.

It has been an exercise of responsibility from the part of Pablo and Juana, our clients, in collaboration with the architecture team to understand that, in order to have a better house, which has environmental, economic and political impact, we have to build less. This meant to think differently about how one lives in the house and all the experiences one can have inside , reducing the constructed area, eliminating corridors or transitional spaces, and also providing a wooden floor that makes every corner of the house a possible livable space. This house not only builds less in area, but also in materials, dispensing with constructive elements such as interior divisions, insulation and interior veneer in facades, floor and roof, as weather conditions allow it, being a house completely open to the environment, where some mornings the clouds enter for breakfast.

Link to the project on the architect / engineer website: http://santiagopradilla.com/detalle/casa-tejida