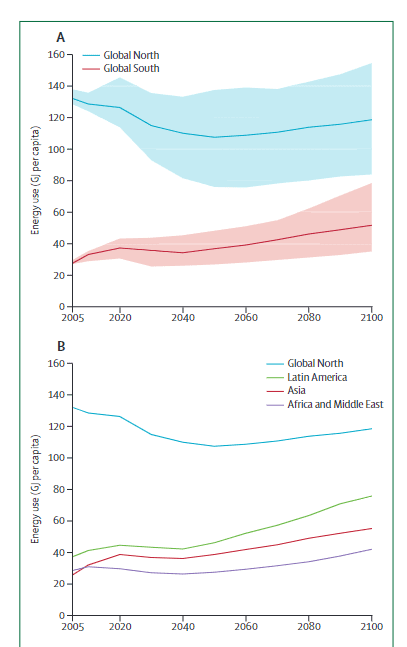 The challenge of climate mitigation is made more difficult by high rates of energy use in wealthy countries, mostly in the Global North, which far exceed what is required to meet human needs. In contrast, more than 3 billion people in poorer countries live in energy poverty. A just transition requires energy convergence—reducing energy use in wealthy countries to achieve rapid emissions reductions, and ensuring sufficient energy for development in the rest of the world. However, existing climate mitigation scenarios reviewed by The Intergovernmental Panel on Climate Change do not explore such a transition. On average, existing scenarios maintain the Global North’s energy privilege at a per capita level 2·3 times higher than in the Global South. Even the more equitable scenarios perpetuate large energy inequalities for the rest of the century. To reconcile the Global North’s high energy use with the Paris Agreement targets, most scenarios rely heavily on bioenergy-based negative emissions technologies. This approach is risky, but it is also unjust. These scenarios tend to appropriate land in the Global South to maintain, and further increase, the Global North’s energy privilege. There is an urgent need to develop scenarios that represent convergence to levels of energy that are sufficient for human wellbeing and compatible with rapid decarbonisation.