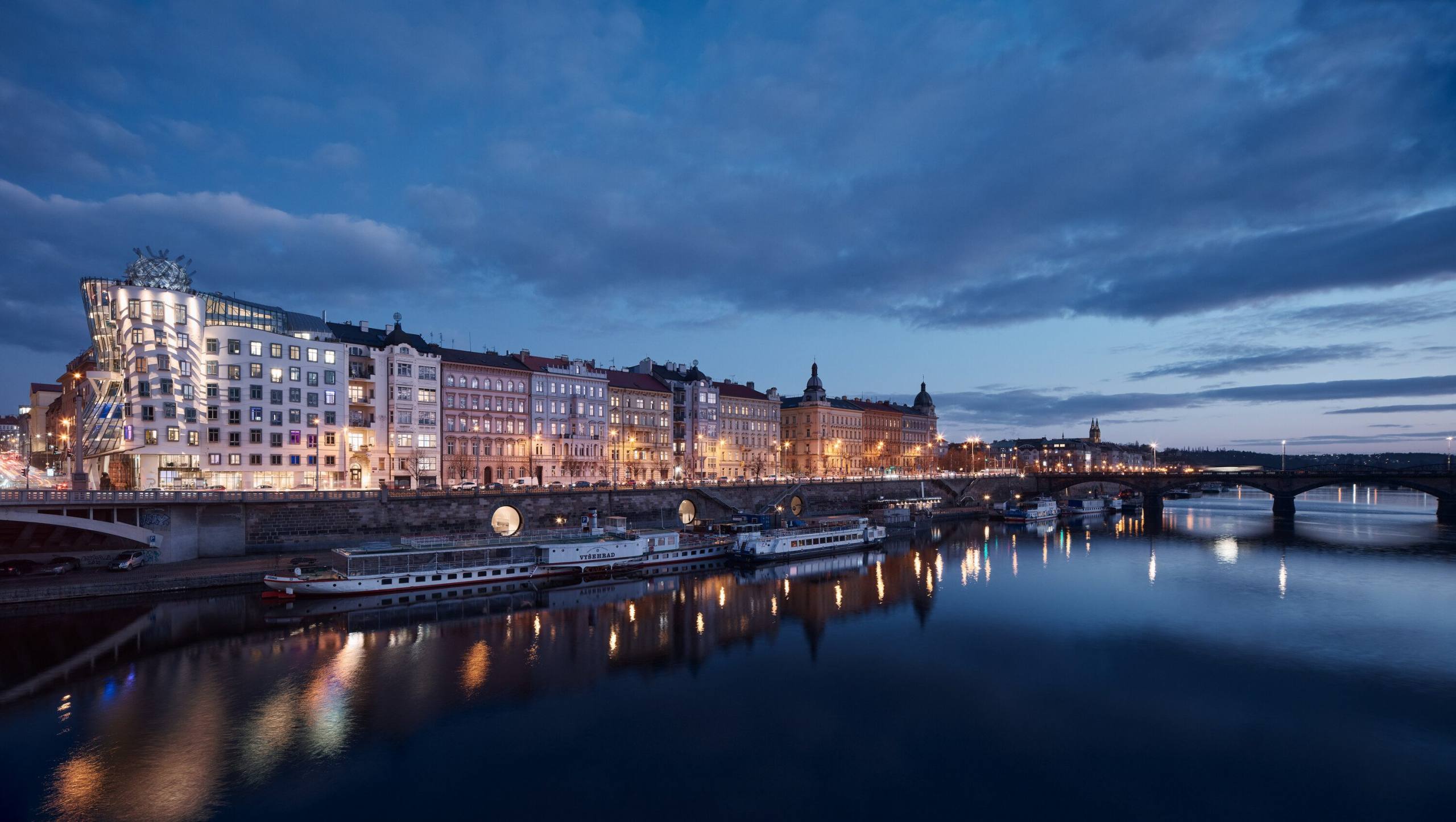 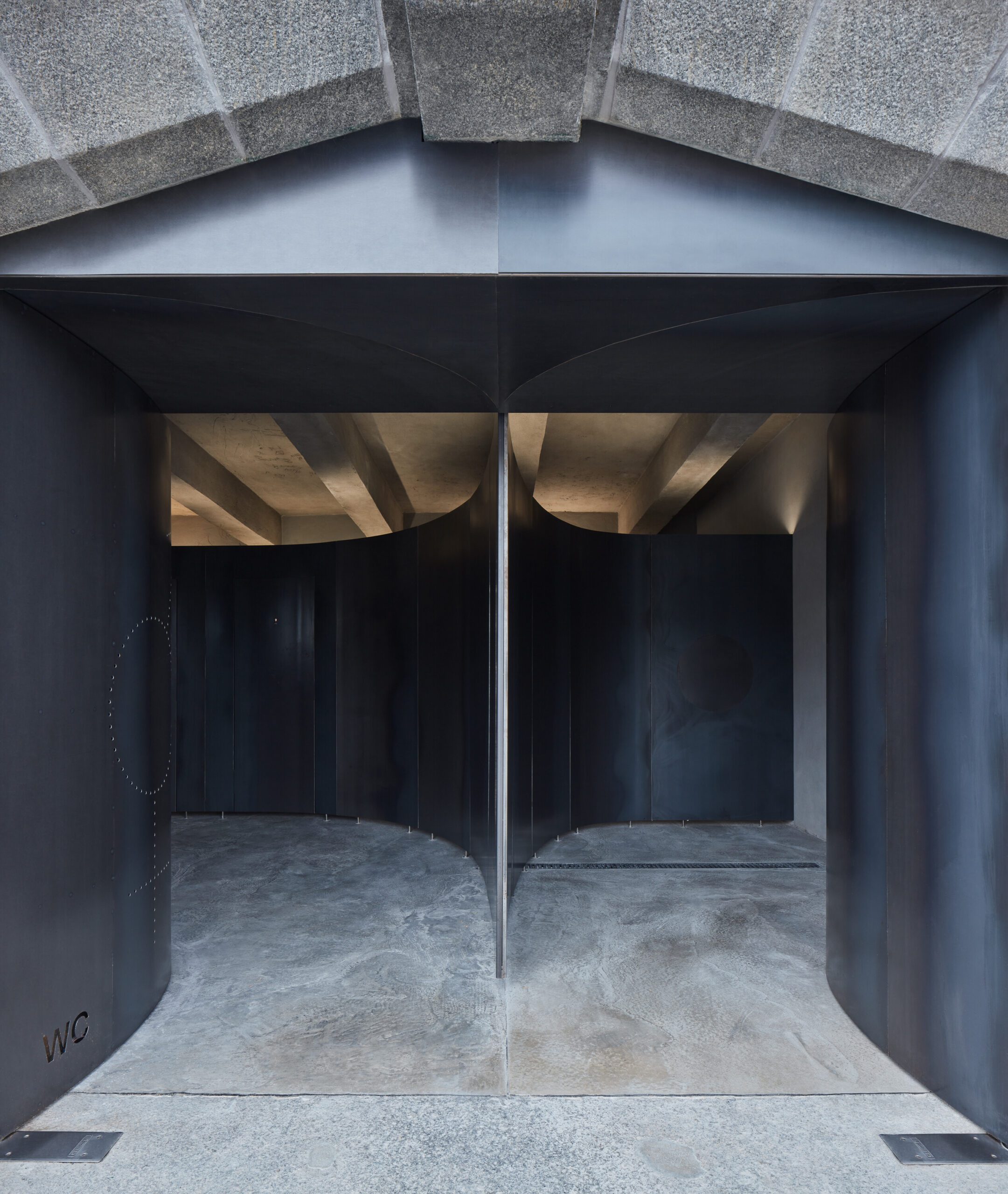 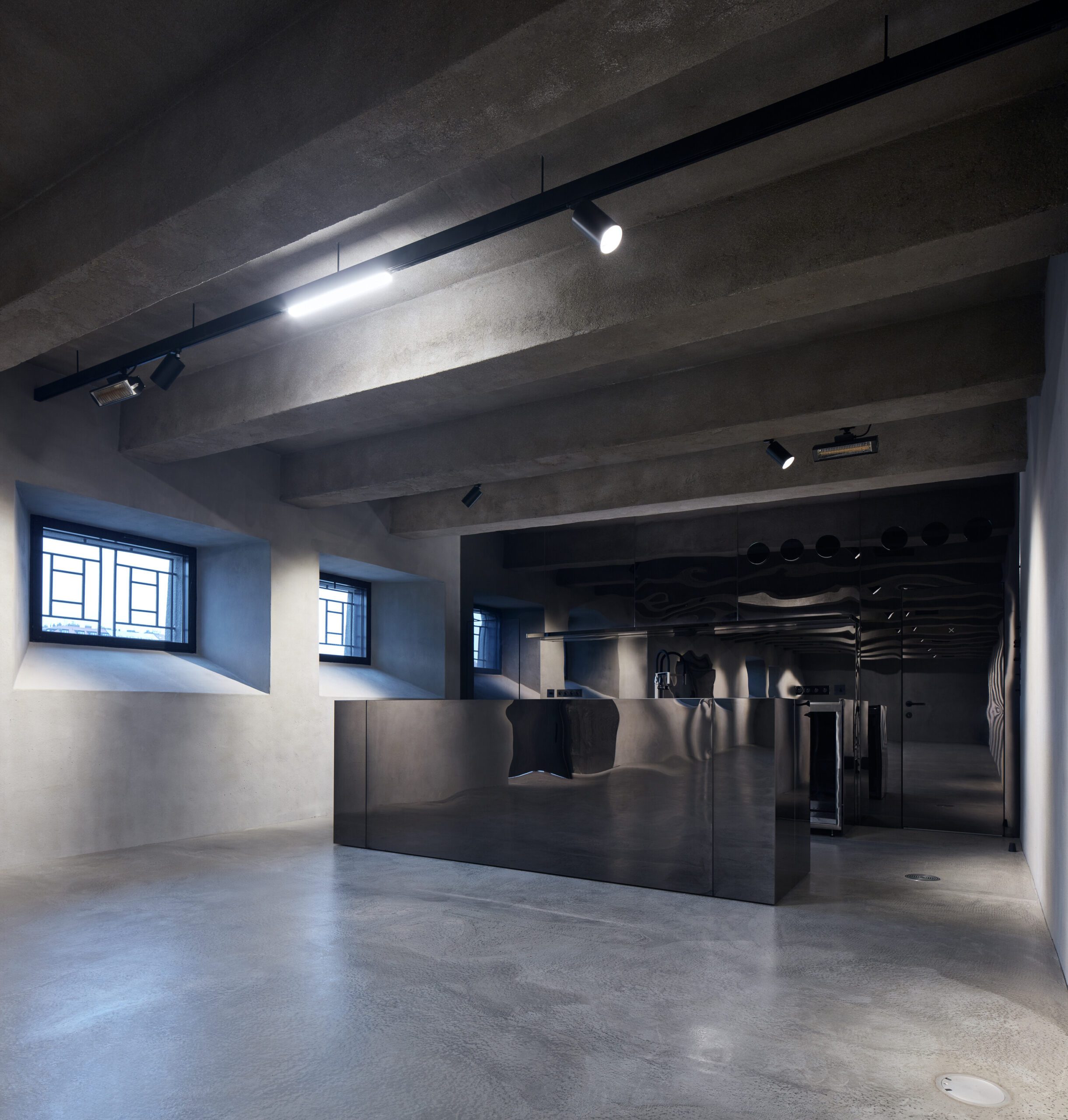 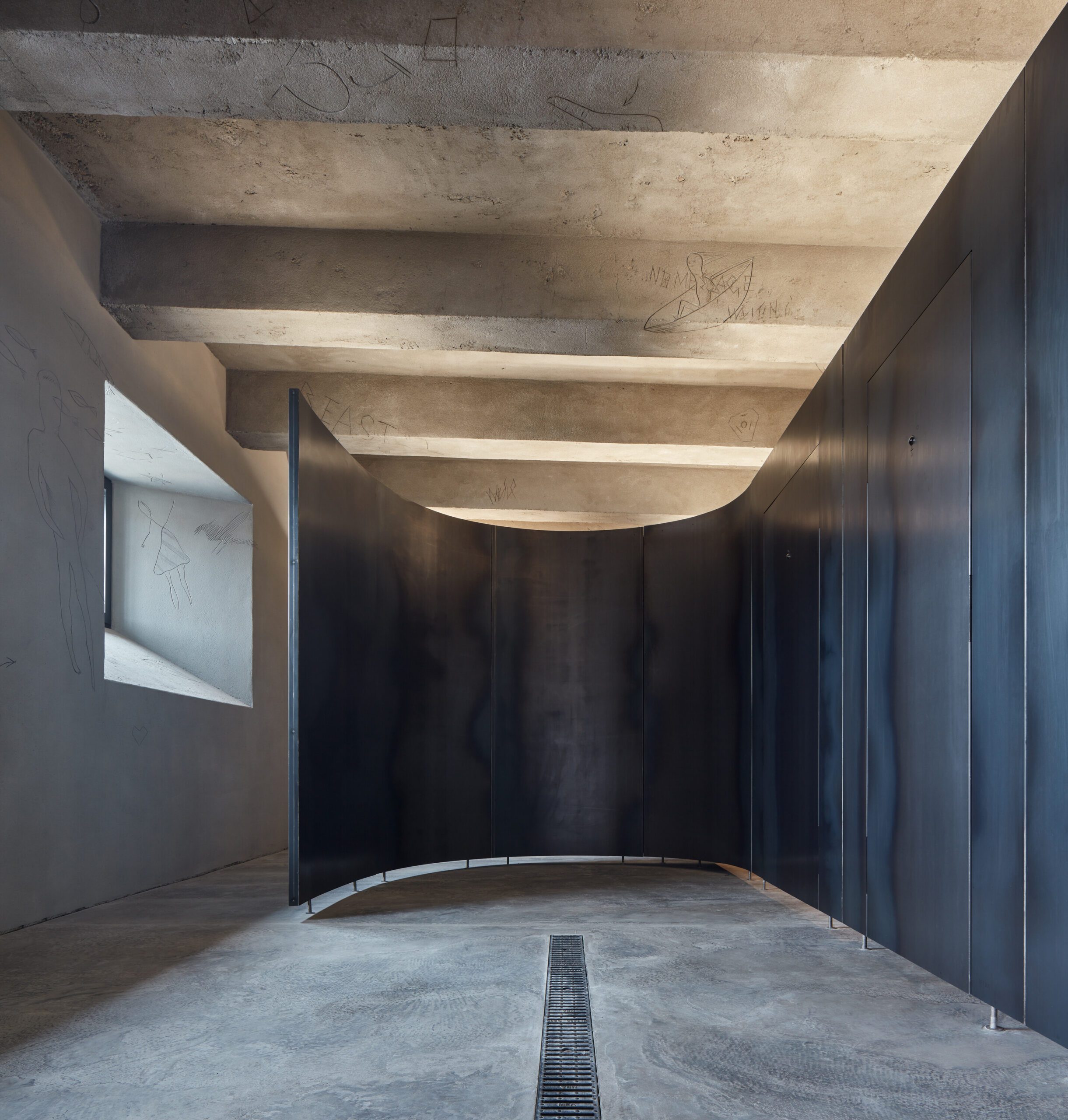 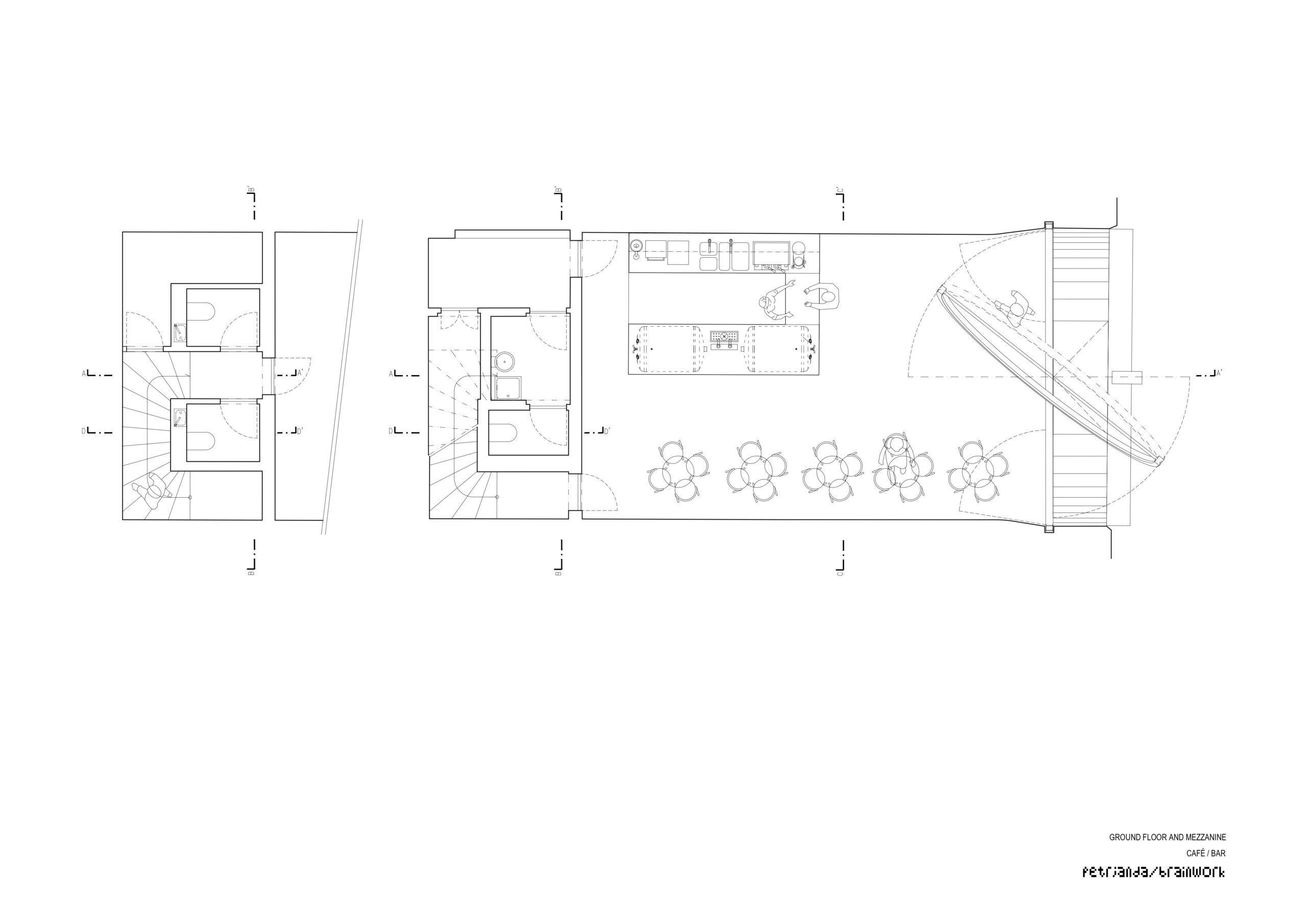 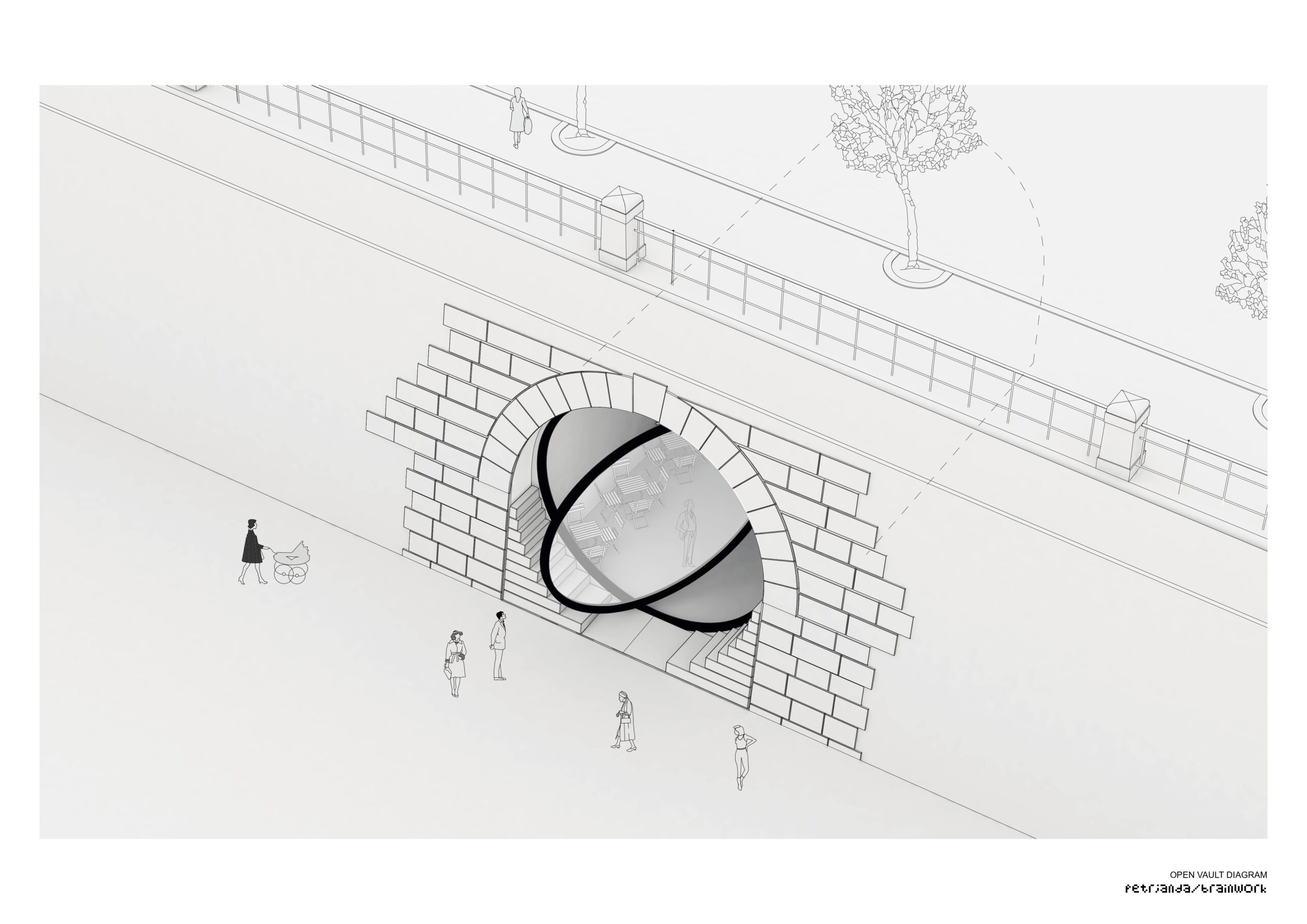 The project has been built for 10 years. We co-initiated it in 2009 as a program and architectural revitalization of the Prague riverfront area that was built as a quay and transhipment point. The area was deserted after the 2002 floods and used as a car park. By gradual program activation, we have achieved cultural and social revival, and subsequently, architectural rehabilitation.

Prague’s riverfront area is a public space of city-wide significance, enabling a unique symbiosis of public space with the spinal cord of the city: the Vltava River. In the regulated part of the banks, the riverfront architecture becomes the backbone for the river spinal cord, which, through the individual “vertebrae” of the embankments, holds the skeletal system of the city on which the entire urban structure forming its body is hung. This skeleton should not be stiff, mounted and petrified as a monumental relic, but should allow the flowing and cultural life of all-Prague significance based on architectural and content authenticity. In our revitalization, we initiate this layer and create a functional tension between the opening of the vaults and their content based on unique contact with the exterior, the tension between the “splendid isolation” of the immediate relationship with the river and the secondary connection to the city from the upper level of the embankment. We work with a characteristic approach to spatial detail; our interventions contrast, and at the same time, complement the whole with meaningful (sensory) fragments with the same principle as the eye complements the face; it is its sensor, as well as an integral part.
The vast revitalized riverfront area stretches along the three Prague embankments: Rašín, Hořejší and Dvořák, almost 4 km in length. The completed first phase is Prague’s largest investment in public space after the revolution in 1989, the first of this kind, and with great sociocultural impact. It focused on the reconstruction of 20 vaults in the riverside wall (originally ice storage areas). Instead of creating classic interiors, the vaults are merged with the exterior with maximum contact with the riverfront area and the river.

The vaults will serve as cafes, clubs, studios, workshops, galleries, a library branch, space for neighbor meetings and public toilets. The architectural design works with modular diversity, the spaces are designed as a detailed base that includes all operational and technical facilities and a bar that can be moved to different positions. There is a user’s manual that contains the identification of the individual tenants and the addition of built-in elements (the insertion of floors into large vaults, exterior bar, etc.) Emphasis is placed on the possible adjustment of each of the vaults so that they gain consistent integrity through the equipment of each tenant with their seating furniture and interior elements. As architects, we supervise the individual adjustments so that the basic vision of the area is preserved, while achieving authenticity for each tenant. We try to be support for the tenants and stay in the background architecturally, allowing a diversity of opinions. Although this often means different architectural sensitivity, we believe this will complement our basic vault design through another layer. Most of the tenants who co-created the phenomenon of the riverfront area will continue there and new projects have been selected from a whole spectrum of plans in an open public competition. We believe they will socially complement the riverfront area and offer various content and program concepts that will cater to all needs.
As part of the architectural revitalization, we initiated the creation of a program methodology for the riverfront area. The position of curator was created to complement the functional triangle of manager–architect–curator, with an authority overseeing the cultural and social quality of this valuable public space.

The interventions symbiotically merge with the original architecture of the riverside wall, into which they naturally fuse; by using the acupuncture strategy, they re-create a monumental whole. The aim is the most direct connection with the riverfront area with the maximum opening of the spaces inside the wall. The architectural design responds to the context of the place and works with minimal artistic means that allow purging of the existing shapes and relations and finding new interconnection views and possibilities arising from the environment of the embankment.

The six vaults on the Rašín Embankment are built following the almost circular arc of the upper part of the existing openings. The design itself is based on a tiny intervention, which takes more than it adds and brings the existing quality back in a contemporary way, creating a unique situation and opportunity. The former stretch metal curtain wall and stone constructions built into the original bridge arches of the riverfront wall were knocked down and replaced with large-format glazed round windows that open by diagonal rotation inside the frame. The entrance portals are designed as atypical steel frames with dilated elliptic glass weighing 1–1.5t. The stone arched linings of the existing portals are completed with stone stepped volumes following the former steps allusion, which hide the installation shaft, air-conditioning vent and anti-flood control elements. The elliptical pivoting windows made of organic glass 7cm thick and 5.5m in diameter weigh approximately 2.5t. Each has a unique shape and, due to their size exceeding the standard glazing, these are probably the largest pivot windows in the world. Opening and closing is engine powered. For the operation of the inner spaces, the windows are fixed in the position of 60% of its opening. Other options are automatic opening with motion-detecting sensors, or they can be opened by the bar staff. The fourteen vaults on the Hořejší Embankment have steel sculptural entrances curved into the jamb in such a way that they connect the vault with the riverfront area in the entire space when opened. In the vaults with public toilets, the entrance wings follow a smooth arc into the interior membrane separating the cabins from the public area.

During the reconstruction, all built-in elements, including floors, were demolished and built using a method of insertion of the new building into the original space. Flood control reinforced base slabs with pumping sumps were made, water infiltration was repaired and walls were insulated and finished with torcreted concrete on load-bearing reinforcements, consolidating the geometry of rolled vaults. The built-in partitions were concreted as monolithic reinforced concrete ones with inserted installations. The design and materials of the individual elements of the vaults are unified for all types of spaces. The surfaces of the walls and ceilings are designed as sandblasted concrete with a cast concrete floor and a cast monolithic staircase. The hatches and doors are finished with surfaces corresponding to the adjoining surfaces of the walls and floors (sandblasted and cast concrete and impregnated black steel in the public toilet vaults). The doors are non-rebated with hidden self-closing devices. In the vaulted spaces, built-in inserts for hanging exhibitions are inserted into the surfaces. The inserted parts of bars and partitions are clad in black titanium-coated stainless-steel plate, complementing through reflection the spatial geometry of the vaults, and through the constant volatile movement of the reflection, bringing the fluid incomprehensibility of the river inside. The lighting is designed using light ramps in the public toilets as indirect lighting embedded in a steel wall with light reflection from the ceiling.

A combination of floor heating with air-conditioning with heat recovery and infrared heaters allows year-round operation, so it can be connected with the riverfront area with the windows open all year. All of the engineering distributions are integrated into the vault structures so that they do not interfere with the visual design. The air conditioning has atypical slits inserted into the portal staircase joints and inner slots on the Rašín Embankment; whereas on the Hořejší Embankment, it is inserted into the window jambs and outlets in the floor and walls. The electrical installation outlets, water and sewerage are hidden in built-in cylindrical floor boxes. The vaults are barrier-free, protected by portable flood-stop barriers. All of the spaces use modular, fully-equipped cabins that include wall-mounted stainless-steel toilets, custom-made, automatic washbasins with hand dryers, lighting, waste bin and fan. The toilet doors have atypical light occupancy indicators designed as a glass ball with a pictogram (men, women or unisex). The entire sewerage removal system works as a pressure pumping system, which pumps the sewage into the sewer mains located above the level of the embankment.

The next phases of the ongoing revitalization include design of the street furniture (underground litter bins, drinking fountains, benches), free-standing toilets, floating pool, floating terminal for cruise boats and floating toilets, as well as a lighting system. The remaining few vaults and infrastructure networking are now being reconstructed. One issue to be addressed is a reduction in boats and floating facilities anchored to the river bank and situating these so they do not obstruct the contact between the newly opened vaults and the river. There will be a rearrangement and a reduction, which should reflect the qualitative contribution and logic of placing the floating facility with respect to the value of its type, architectural nature and program, with preference for low decks allowing a view of the river and cultural content that does not parasitize the riverfront commercial exploitation through the quantitative sale of refreshments.
One of the important elements enabling the clearing of the bank edge of the riverfront area is a future floating terminal for cruise boats, which will concentrate the boarding of boats into one epicentre. The floating pool, restoring the Prague tradition of river baths, is an element with a significant relationship to the history of the area.

Link to the project on the architect / engineer website: http://www.petrjanda.com/